Sherlock wearing only a sheet in a Buckingham Palace Drawing Room

Awesome! Writer Steven Moffat has surely outdone himself with the first story in the second series of Sherlock, featuring the enigmatic and erudite Benedict Cumberbatch as Sherlock and award-winning Martin Freeman as Dr Watson. In an interview on BBC Breakfast on December 20th Moffat declared that he and co-creator Mark Gattis have been far more faithful to the Conan Doyle originals, even though they have transposed his stories for the modern day. Scandal in Belgravia (not Bohemia) certainly lives up to the reputation given to Sherlock Holmes by its original creator Sir Arthur Conan Doyle. The captivating author would surely be smiling if he was around to see what his favourite detective is currently getting up to. Cumberbatch was surely born to play Sherlock Holmes. And, in this episode he also gets to wear the ‘deerstalker hat’. 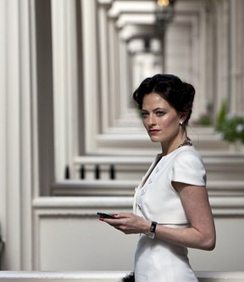 Sherlock re-commenced on the BBC on New Year’s Day, reports our London correspondent, with very little prior notice. But some ten million people caught the message and tuned in. A staggering result. Although I imagine many of the BBC’s traditional audience might have found some scenes quite confronting. Moffat and Mark Gatiss’s brilliant reinvention of a contemporary Sherlock is brainy, sexy and savvy. Sherlock outwits ‘The Woman’ – Irene Adler, by cracking the code to reveal damaging information about a royal ‘client’ stored on her smart phone. But that’s not all that is revealed. Ms Adler, played brilliantly by Lara Pulver, bares all to the viewers, to Sherlock and to Dr Watson (who one would think would be used to seeing naked women). According to Britain’s Daily Mail the series co-creator Steven Moffat said he gave Holmes an overtly sexual sparring partner to scotch speculation about a homosexual undercurrent to the relationship between him and Dr John Watson. Sherlock also lets us know his body is not so bad either, when he nearly loses the sheet wrapped around his naked frame. And, in a Buckingham Palace Drawing Room of all places. What is the world coming to. 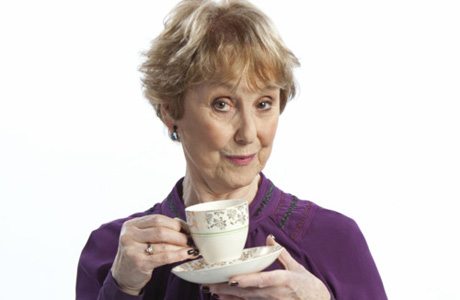 After ending the first series on a ‘cliff hanger’ with Moriarty about to blow up Watson in a Swimming Pool complex, after Moriarty goes off on another chase to the tune of the Bee Gees’ ‘Staying Alive’, the first in the second series moves along at a cracking pace.

Good old Detective le Strade (Rupert Graves) is back, as is the tea drinking Mrs. Hudson. She is given a very bad shakedown by some pretty nasty CIA types. And, as we would expect Holmes and Watson come to her aid. Sherlock shakes him down by throwing him out of his window onto the rubbish bins below, several times too. However when Watson suggests a trip into the countryside to aid her recovery from this very traumatic event Sherlock scoffs at the idea “Mrs Hudson leave Baker Street? England would fall.” he says.

Once again co-creator Mark Gattis is just perfect as Holmes brother Mycroft. One touching scene has he and Sherlock wondering ‘if there is something wrong with us’ as they fail to have feelings after viewing a family grieving over a dead body. There are some simply lovely touches and many sublime moments, especially as the boys host a dysfunctional Christmas drinks ‘at home’ at 221B Baker Street, which is all decked out with decorations for the occasion. 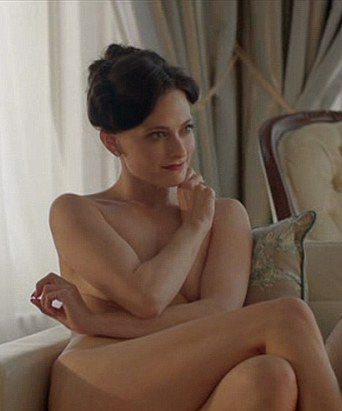 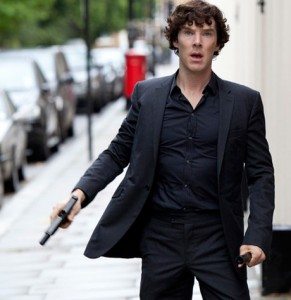 Sherlock with a Gun?

The script is truly dialogue delicious, Moffat has had so much fun weaving its many complexities. They quip constantly at each other and deliver some poignant phrases that make the time rapidly race by. One can clearly sense Moffat’s delight at bringing Conan Doyle’s characters into a contemporary world full of technology that allows him to innovate with such great style.

Bringing Sherlock into the present time has meant that Moffat and Gattis can, while not entirely humanising him, provide him with something Conan Doyle did not; pathos, a celebration of man’s heroic qualities in harmonious proportion. Pathos is such a good word, it describes our interior universe and yet implies something so much more than simple emotion: it refers to that inner universe one to which man is drawn attracted by the very nature of his own complexities and contradictions.

This first episode of Sherlock in the second series will certainly have you glued to the screen for the whole 90 minutes. You may be shocked, you will smile a lot, you will laugh out loud and perhaps even let a tear slide. It is a fantastic start and will have everyone counting down the days and hours until the second of three, ‘The Hounds of Baskerville’. Watch the Trailer and Interview with Steven Moffat

Sherlock – A Scandal in Belgravia

Janet Walker reports that there are many and varied sensational summer events and experiences to enjoy in and around Melbourne, Australia after December 1, 2013