The game is afoot yet again! Sherlock has been seen having a ‘Skyfall’ moment, standing on the rooftops of London drinking in its beauty and atmosphere before getting back into the thick of it all.

Sherlock is very definitely shrewd, sexy, savvy and all ‘New Age’ and it seems we are all more than a little taken with Holmes and his trusty side kick Dr Watson right now.

In fact people all around the world went completely ‘gaga’ when Sherlock quietly turned up again, to beg Watson’s forgiveness for letting him believe he was dead. Moffat and Gattis gave us two splendid series of three episodes each of Sherlock on television. Then we all had to wait for two years to find out what happened after he appeared to commit suicide by falling from a hospital roof.

Sherlock’s back in scintillating style for Series Three and in Episode 1: The Empty Hearse we find out Holmes still lives and Watson’s grieving ends… please, don’t read more if you like surprises!

This is entirely elementary, because this classy actor has all the attributes and abilities of a mega star.

Everywhere he goes fans mob Benedict Cumberbatch! Even in L.A! Who would have thought such euphoria would happen when the series first appeared?

At the end of Series 2 everyone pleaded Sherlock, for Watson, just don’t be dead after your fall.

However, how could Sherlock disappoint his best friend, the only person who knows him, understands him and just loves him anyway? And if he comes back where has he been and why?

There are so many questions Watson will want answers for so he best take care because he’s the one who wished that it might happen?

So keep that fabulous Belstaff coat on Sherlock, put on your deerstalker hat after all, you are not only just clever and a household name, but also a fashion style guru with fashionistas to please.

Steven Moffat has stated he didn’t ever think it possible that he and Mark Gattis his co-creator, who also brilliantly plays Sherlock’s brother Mycroft, would have such a huge hit on their hands.

Only recently Cumberbatch won the Radio Times Award for Sherlock being the Best Detective at the British National Television Awards.

Moffat commented to a London newspaper he and Gattis have no idea how it turned into a runaway hit show or how to explain it. “…drop me a line in about 40 years and I’ll do my best’.

Now they have to coordinate their own, and the diaries of Cumberbatch and Freeman, who are after all now both integral to the future of this barnstorming international phenomenon. Series 3 is over in England and has fans and distributors of this world wide hit show pleading for more, even if they were all just a little bit ‘offbeat’ so to speak. In England alone over nine million people watched each episode of the third series, with a record number watching the final episode, sending everyone associated with the project into a completely happy spin and critics labelling it ‘perfect’.

It was in July 2010 that news first broke about a whole new television take on one of the world’s favourite fictional detective characters Sherlock Holmes with the violin playing Byronic styled Benedict Timothy Carlton Cumberbatch as the main attraction.

Martin Freeman as Dr Watson with his own impish boyish charm that gained adoring looks for his friend have won him, together with his blog, his own huge fan base.

Both have been dabbling in a fantasy world in between times, Freeman in New Zealand filming with Peter Jackson and Cumberbatch becoming the arch villain Khan in Star Trek.

In episode 1, it’s Mycroft (Gattis) who finally rescues Sherlock from a sticky situation – in chains, naked, being beaten and tortured.

Mycroft is in capital form, having insinuated himself perfectly into Sherlock’s milieu, he’s having the time of his life.

Moriarty despite Sherlock’s best efforts to get rid of him after what had appeared to be his a momentous fall off the hospital roof is possibly still out there somewhere, despite Sherlock spending two years of his life dismantling his network of villains and crooks.

However, the most important thing is that John Watson’s extended period of grieving and waiting for his friend, who had made his life such a joy before he ended up in a graveyard, is finally over. 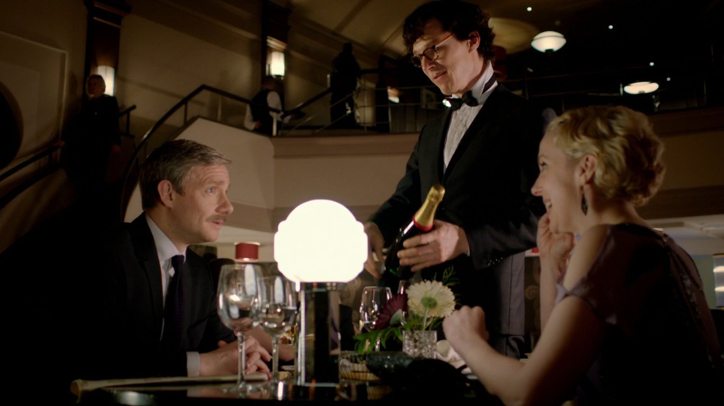 You would expect Watson would be over the moon to see Sherlock when he turns up out of the blue after two years of absence, posing as a waiter in a restaurant where Watson is dining, hiding behind a most horrible moustache. 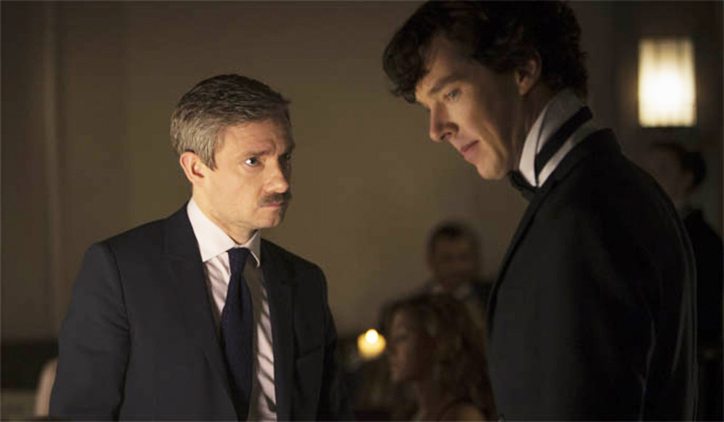 He is trying to summon the courage to propose to the girl of his dreams, Mary Morstan.

Instead when Sherlock appears he throws a tantrum of epic proportions, having spent two years working through his grief to start emerging out the other side and to finally allow a woman to enter his life at all.

To find out that the hearse was indeed empty!

Watson doesn’t really know how to react. So initially he blows a gasket and tries to strangle Sherlock, who is forced to take he and Mary to a quiet café in order to try and explain. 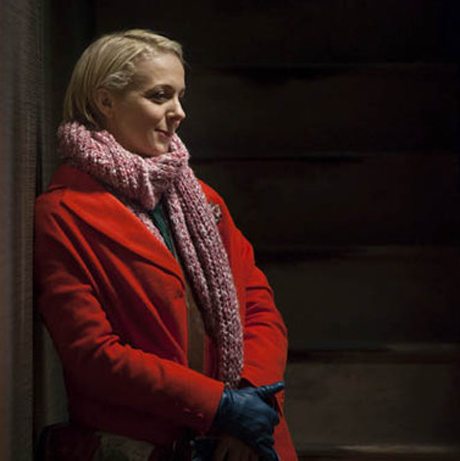 Watson initially punishes his friend unmercifully by turning his back on him in favour of the much more welcoming arms of his fiancée, who is British actress Amanda Abbington, interestingly Freeman’s partner in real life.

But can Mary calm him down and restore order. Is she really what she seems – a sweet demure young lady from a good background?

Only time will tell.

So what did happen, well just to confuse the issue we are given a number of theory scenarios, imagined by Sherlock fans, that are screened throughout the first episode leaving us not knowing what really went down at all.

The best perhaps was where Sherlock bungy jumps off the roof, springing back into the air while his mates hypnotize and fool Watson and replace his body with another wearing a mask. He then crashes through the window into Molly’s lab, as any Byronic styled hero would dashingly do, gives her a long prolonged kiss that we all know she has hungered for.

However, will it be enough to keep her wanting more, and yet loyal to her friend for another two years? Does absence really make the heart grow fonder? Sherlock has certainly tested everyone’s loyalties to their limits, including Lestrade, who is also back, aka the ever endearing Rupert Graves.

He is so pleased to see his colleague that he gathers him into a huge bear hug much to Sherlock’s chagrin. 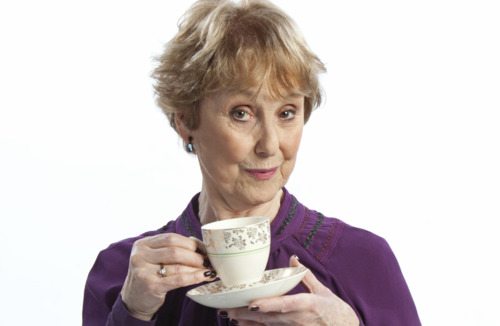 Mrs Hudson is also back, deliciously predictable; Una Stubbs is so delightfully daffy, dumping down a cup of tea and cookies and admonishing Watson for forgetting her completely – not even a phone call.

Having met Watson’s lady love Sherlock is completely puzzled by Mary, seeing her many conflicting emotions in his instant reading of her personality, clever, liar, short sighted, disillusioned, someone who bakes their own bread?

But there is a mystery to be solved with London facing a major terrorist threat and Sherlock needs John’s help.

Will Mary be able to persuade John to forgive him as she promises Sherlock? Will it just be the two of them once again; enjoying the thrill of the chase, the blood pumping through their veins as a dynamic duo they take on the rest of the world?

Fabulous fun to be had for eleven days by kids of all ages with the Kids Summer Festival at NGV International & NGV Australia from the 16 – 26 of January, 2016