The clever creators Stephen Moffat and Mark Gattis, and their writer collaborators are not merely resting on their laurels but in Series 3, episode 2 are pushing Sherlock into entirely untested waters.

They are addressing his emotional challenges, celebrating his difference and revealing some of the best parts of his very complicated self.

Don’t read any more if you haven’t seen it yet and want to keep it a surprise. 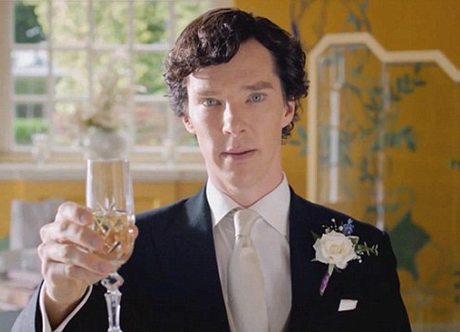 The day should be perfect for Watson, because not only was he marrying his lovely Mary, but also his best friend Sherlock is back from the dead and standing by his side as his best man.

Mary instinctively understands Dr John Watson and seemingly is not threatened by his relationship with Sherlock Homes, or their friendship.

She is highly intelligent, with a rare insight, one that complements theirs.

However, are there signs that there are ‘three people in this marriage’?

Holmes already believes Mary is pregnant, much to John Watson’s surprise, after all he’s the Doctor! First the biggest challenge of Watson’s big day will be Sherlock Holmes challenging thirty page long best man’s speech, one that lasts for much of the episode.

He is clearly a bundle of nerves at the thought of delivering it to the assembled guests.

“Now let’s talk about murder – sorry did I say murder, I meant to say marriage! …the point I’m trying to make is that I am the most unpleasant, rude, ignorant, and all around obnoxious a…hole that anyone could possibly have the misfortune to meet. I am dismissive of the virtuous, unaware of the beautiful, and uncomprehending in the face of the happy. So if I didn’t understand I was being asked to be the best man, it is because I never really expected to ever be anybody’s best friend … certainly not the best friend of the bravest and kindest and wisest human being I have ever had the good fortune of knowing”.

It is complicated, especially when Sherlock realises there is a murderer in their midst, and while giving his speech he has to deduce what is going to happen before a life is lost. His words and the way the speech is delivered however, do not indicate the actions of a ‘high functioning sociopath’. Just a big man with a big brain and a big heart, one who has learned from harsh lessons in life.

He knows how to conceal a great deal to not only save himself but also those he cares about from being hurt.

The Sign of Three is full of flashbacks, character assassinations and witty, comedic moments. 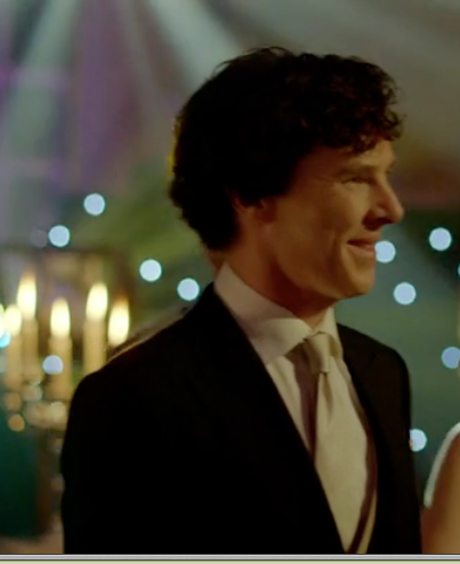 Prior to the big day Sherlock has interviewed everyone who will be involved in the wedding day, working out their suitability to be part of the wedding party in the first place whether they are a bridesmaid, flower girl or even an usher.

He grills Mary’s ex David who is an usher saying

“I think from now on we’ll downgrade you to casual acquaintance, no more than three planned social encounters a year and always in John’s presence. I have your contact details I will be monitoring.” –

Watson’s buck’s night certainly turns into far more than even Sherlock bargained for. Lestrade has to secure Sherlock’s and Watson’s release from jail, after they have been arrested for drunken revelry.

Sherlock has tried his best to control scientifically the perfect volume of alcohol they will both consume in order to have fun without losing control, but John predictably sabotages all his efforts. 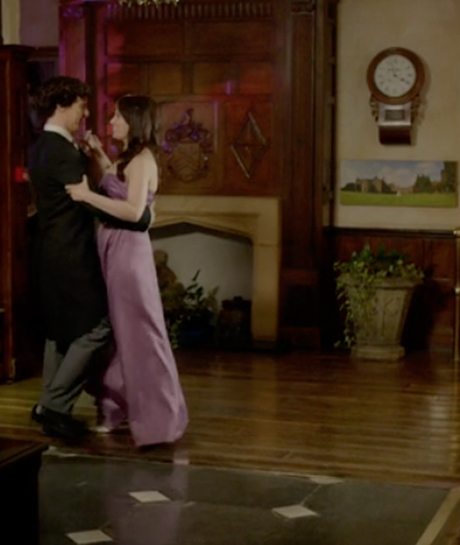 The wedding feast, or the ‘night do’ as Mycroft calls it, following the wedding in a picturesque church, is being held in the splendours of the orangerie at Goldney Hall in Bristol, which is today owned by the University.

The room looks delightful, the décor straight out of the golden age of English country style, with a superb decorative brilliant yellow based ‘chinoiserie’ style paper covering the walls in a great room full of light streaming in from the large graceful Georgian style arching windows that overlook an ornamental canal and formal gardens.

Sherlock’s interactions with the bridesmaid he is partnering on the day are hilarious, as he shows off his talents, including an ability to dance. Mary gives off the vibe that she is far more than she seems… so has she secrets, yet to see?

Is she merely manipulating both Watson and Holmes to suit her own ends?

The wedding and case being solved are interlocking mysteries for Sherlock.

The show has many idiosyncratic visual elements, including a trip to Sherlock’s ‘Mind Palace’ as part of his thought process where lo and behold we catch a final glimpse of Irene Adler, just enough to wet our appetites for more.

All the great characters we have come to admire are at the wedding.

Steven Moffat has penned a brilliant witty deduction revelation for a speech that is all about Sherlock fessing up his love for his friend, revealing the best part of his humanity while actively using his giant mind to also solve a case. 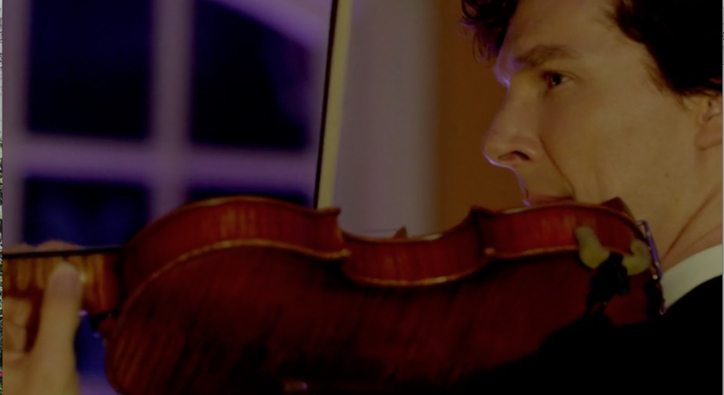 The man of the moment Sherlock has composed a wonderful new waltz for John and Mary, which he plays on his trusty violin while they lead the dancing on their Wedding Day, after which its seems our Sherlock may be heading off along an all-new and exciting path.

But before he does there is the small matter of the murder of the Major to be solved, so he can be saved. 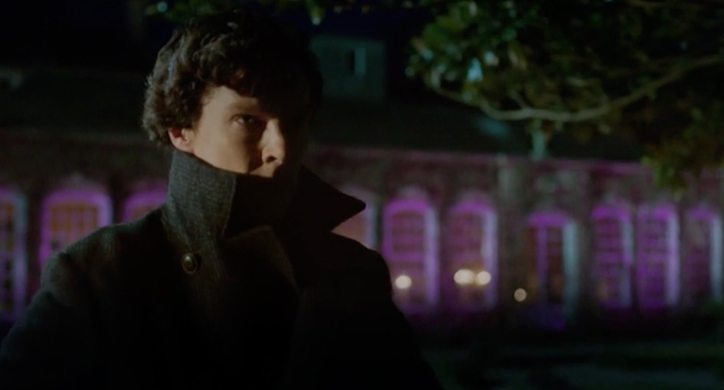 “You are not a puzzle solver, you never have been. You’re a drama queen. Now there is a man in there who is about to die. The game is on. Solve it!”

We are left wondering at the end will Sherlock, Watson and Mary become an ill-fated trio?

There is a sense that a great deal more is yet to come and to be forewarned is to be forearmed.

Today, you sit here between the woman you have made your wife and the man you have saved. In short, the two people who love you most in all this world. And, I know I speak for Mary as well when I say we will never let you down and we have a lifetime ahead to prove that.”