The filming of the second series of Sherlock has just been completed in England. Re-invented by Steven Moffat and Mark Gattis of Dr Who fame when traveling, most appropriately on a train, Holmes and Watson were resurrected as living, breathing, modern men just as they were originally.

For fans of the shrewd, sexy savvy reincarnation of one of fiction’s most enduring characters this is the good news they have been waiting to hear. The three episodes are:-

It was in July 2010 that news broke about a whole new television take on one of the world’s favourite fictional detective characters Sherlock Holmes. 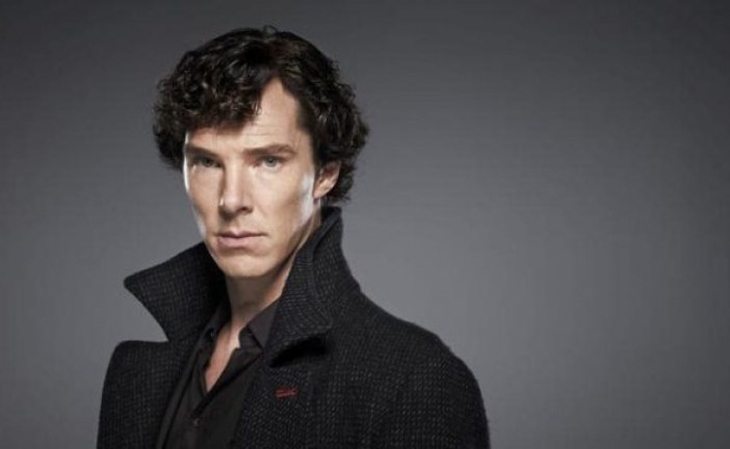 The main attraction is the violin playing Byronic styled Benedict Timothy Carlton Cumberbatch. He came to attention first as William Pitt the Younger in the 2006 film Amazing Grace and other select roles, including being narrator for the six part series South Pacific aired on Australian television as The Pacific.

At only 34 years of age he has an impressive body of work behind him. He turned the consulting detective into an instant television superstar. Cumberbatch described his Sherlock as “a man of action and a great, great thinker”.

He admitted feeling anxious about taking on the role that has turned him into an instant superstar. He said “You immediately think of Holmes past and present. What am I stepping into? Do I want to be recognised just for this character? You even start to curse your blessings. It’s a strange thing being an actor.” The first episode ” A Study in Pink, which was directed by Paul McGuigan and written by Steven Moffat, polled way ahead in the ratings against a great combination of Tom Cruise and Cameron Diaz, starring with Hammond, May and Clarkson, on Top Gear.  Now that’s really something in Britain where they really love the boys with their toys. It also received a record breaking reception here in Australia when it aired on Channel Nine and went on to win the BAFTA Television Award in 2011 for Best Drama Series . This new, exciting, hip and completed updated style conscious confident Sherlock wore a one thousand pound Belstaff Coat. He looked so good he started a retail run on the defining garments, as men clamoured to ‘get the look’. Surely the great detective himself could not have deduced that this would happen. Sherlock a style guru, goodness.

This new age take on the popular sociopath Sherlock gained a legion of fans as he sent texts from his mobile fast and furiously, while chasing villains on foot through back lanes and alleys leading off Baker Street, very near to 221b the home and haven that in episode one he invites Watson to share. Watson has just come back from the war in Afghanistan, but not even that could prepare him for the shock of meeting the very eccentric Sherlock Holmes.

Sherlock’s new method of communication works well alongside the three nicotine patches on his arms that are helping him to think. All the symbols of the old Holmes are there, but reinvented in new and clever ways. The Guardian reported they have been ‘stripped of their period anachronisms so that the audience focuses on what originally enchanted people about the books: the characters, themes and stories’. 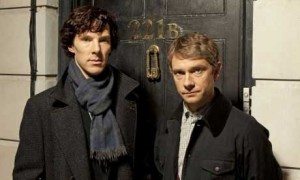 Watson, Sherlock’s trusty sidekick, is suffering from a psychosomatic injury received in the war at Afghanistan, ironically a war already in motion when the author of the original Sherlock Holmes, Conan Doyle, first created his immortal characters with a quill pen.

Limping at first, Watson soon forgets his cane when the chase begins, thrilling to its spontaneity and the rush of an adrenalin high. Holmes was in pursuit of a serial killer, who cleverly uses mind games to draw him onto his killing field, which is set in a pair of stunning neoclassical buildings, just to confuse followers. 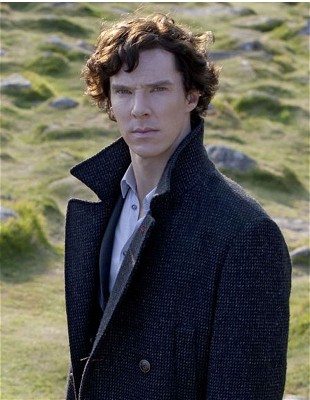 Watson is very well drawn by Martin J Freeman, from the award winning The Office and Hitchhikers Guide to the Galaxy. Martin Freeman won a BAFTA for ‘best supporting actor’ in 2011 for his role as Doctor Watson.

Sherlock’s great brain and its imaginative deductions are still to the forefront with Watson busy recording all their latest adventures on his blog, which really exists.

D.I. Lastrade is there in the guise of Rupert Graves, who first appeared in Room with a View as Freddy Honeychurch and has since had many great roles. Una Stubbs, Ralph’s daughter from Until Death Do Us Part, is their lucky landlady, but definitely not their housekeeper!

The project is a collaboration between Steven Moffat and Mark Gattis, writers for the new series of Dr Who. Gattis said “What appealed to us about the idea of doing Sherlock in the present day is that the characters have become almost literally lost in the fog … And while I am second to no one in my enjoyment of that sort of Victoriana, we wanted to get back to… why the characters became the most wonderful partnership in literature.”

Steven Moffat praised Cumberbatch’s portrayal of Sherlock Holmes. “It’s a bit of a blessing that one of the hottest young actors on the planet at the moment happens to look like Sherlock Holmes. He does have the look. He’s got that imperious style and he’s a bit Byronic.”

Steven Moffat also talked about returning to the core of Conan Doyle’s stories. He said, “Conan Doyle’s stories were never about frock coats and gas light; they’re about brilliant detection, dreadful villains and blood-curdling crimes – and frankly, to hell with the crinoline. Other detectives have cases, Sherlock Holmes has adventures, and that’s what matters”. 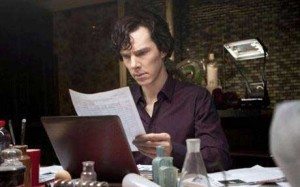 Reports were more than favourable, ecstatic in some cases. Here at last were two writers capable of resurrecting the master detective for a new age. He is after all timeless. His creator doctor, novelist, dramatist, historian, whaler, athlete, war correspondent and spiritualist, Sir Arthur Conan Doyle, himself a vigorous and ardent lover of life would no doubt have enjoyed to be in front of the tellie with a tinnie on Sunday night at London enjoying the show with the seven million + people who watched the first movie length episode.

Doyle’s own life was amazing enough, but it is chiefly as the creator of Sherlock Holmes he is known. These two exciting writers, Moffat and Gattis, do homage to Holmes and Doyle and do it very well indeed. Gatiss puts Sherlock Holmes’s longevity down to the “genius” of Arthur Conan Doyle. “To the end of his days he was very dismissive about his greatest creation – but he’d bottled lightning. The public just loved it. People couldn’t get enough of Sherlock and they’ve never got enough of him since.” Gatiss also stepped in front of the camera to portray Sherlock’s brother, Myecroft. Sherlock is a very new age take on a much loved story. It is a lasting tribute to the indestructible detective and his famous creator, as well as a whole lot of fun. And then there is always… Moriarty who turned up in episode 3 of the first series and will be sure to turn up in the second series, due to air in the first few months of 2012. Can’t wait.

Rose Niland Reviews Orphans by Lyle Kessler, playing at the Old Fitz Theatre, Sydney, Tuesday – Saturday until the 9th May, 2015 for The Culture Concept Circle