Why is it that the humble shoe can evoke so much excitement and so many emotions? Why has such a small item of clothing, originally meant for protection, become such a large part of our fashion psyche?

Remember Dorothy and her ruby red slippers taking her on a magical journey, I know I always wanted a pair!

If we look back through history, shoes became more decorative, even ceremonial. Just think of the tiny treads that adorned the bound feet of Chinese concubines. This was seen as a symbol of beauty and was meant to make the foot look like a lotus flower (see Shanghai Scenes)

In a way modern women are still subjecting themselves to pain of fashion! Really, why do we need to wear 9,10,11 cm heels?

Why do we covet names such as Blahnik, Choo and Ferragamo? Because the shoe always fits! It is one of the few things in fashion we can control.

You can loose or gain 5kgs and you will still be a size 37, 38, 39 etc, and unlike clothing where one label you may be an 8 and another a 14, the shoe is fairly universal in sizing. 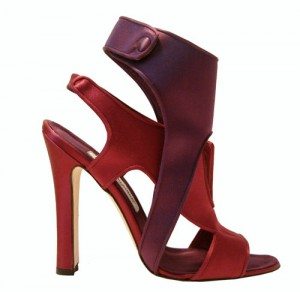 Naomi Campbell once described Manolo Blahnik as “the godfather of sole”. I think many women would agree.

From the first moment Sarah Jessica Parker mention his name on “Sex and the City” all those years ago, they became a must have for the urban princess.

His designs are classic, and his sketches divine. Once purchased, his classic pumps will be part of a womans wardrobe till her dying day.

In fact, in that infamous shot of Bianca Jagger  on a white horse at Studio 54, she was wearing gold leather stiletto sandals by Blahnik (and Halston frock). 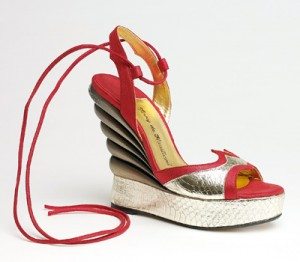 Another rockstar in the world of sole is Terry De Havilland. Huge in the ’70’s, he came from a shoe making family.

His outrageous platforms were loved by David and Angie Bowie, and Britt Ekland.. His most striking shoe was “The Leyla” a three tiered snakeskin wedge, recognised by his signature patchwork detail

Salvetore Ferragamo was a major innovator in the shoe world. He often used cork for his platforms.

Perfect, as this made them incredibly light while retaining height.

By 1957 he had created more than 20,000 styles and registered 350 patents. Ferragamo remains a major player in the sartorial world today. 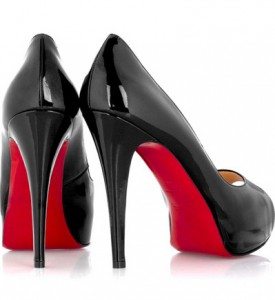 Christian Louboutin and his signature red soles are also highly sort after by the fashion set. He opened his flagship boutique in Paris in 1992, where he continues to flaunt his fabulous footwear.

Louboutins stand out from the crowd.

They are flirty, sexy and bordering on fetish, a must have in any devotees closet! I have to mention the exquisite Jimmy Choo.

Born in Malaysia, he moved to London and established his couture label in 1986. He launched his “ready to wear” line in 1996, in conjunction with Tamara Melon.

She gave the label an edge and it continues to grow world wide. Choo retains his couture line after relinquishing his interest in the RTW in 2001.

His shoes are synonymous with quality and elegance.

The late Princess Diana was a great fan of  Choo.

So why do we love them? The shoe makes us feel good. There is just such a special something about bringing home a new pair.  It is a great way to inject colour into any ensemble.

Just the other day while waiting for the train I noticed a spark of brightness on a very grey platform. 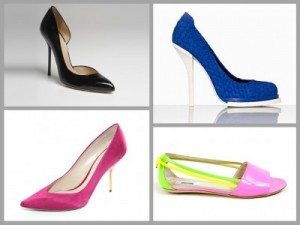 A very stylish woman wearing all black (as quite a few of us tend to do in winter) was wearing gorgeous suede pumps, in three different shades of purple; violet, plum and quince. I loved this individual touch. What a great pick me up on a dreary morning.

I think the shoe really can give us an insight into the personality of the wearer. Do you love the YSL “Tribute”? The Prada ” Hot Rod” range or Alexander McQueens alien” Armadillo”?

What do your shoes say about you?