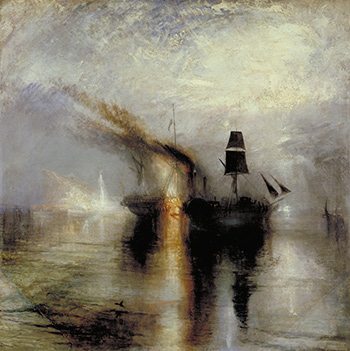 London’s Tate Britain art museum holds the largest collection in the world of the much admired artist Joseph Mallord William Turner (1775 – 1851), the man they call the ‘painter of light’.

Turner left a huge legacy of his works to the British nation and was an innovator, whose works have been and still remain influential right down to the present day.

Turner had a grand vision not only of art, but also of himself because he undoubtedly saw himself as an heir to the great master artists from the past, who had by his day achieved as he now has, celebrity status.

Turner established himself as an English Romantic landscape painter, water colourist and printmaker producing works that conveyed artistic, historical, and emotional meanings. Today Joseph Mallord William Turner is considered to be the artist who bridged the gulf between the English eighteenth century tradition of landscape painting, which was all about enjoying the bountiful gifts of nature, and the art of the present day. 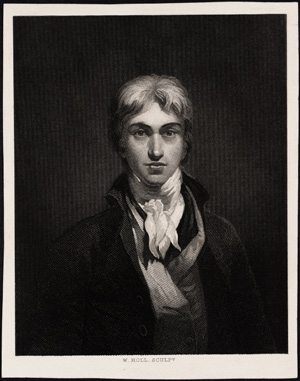 He created a vision that pulsated with light, colour and atmosphere and his technique still allows us to feel the heat of a summer day and sense the vibration of light and experience.

Nothing ever happens in isolation and as we progress we understand more and more how events and trends are inextricably linked.

It is always important to understand historical events in context and in regard to the intellectual, philosophical and spiritual ideas of their day and the fashions and passions of the society in which they take place.

Turner’s own confrontation with the works of French seventeenth century master classical landscapist Claude Lorrain (1600 – 1682), who placed classical ruins in an idealized landscape one that used light and shadow to depict morning, noon and evening, would make an indelible impression on him and his work.

Turner’s work in turn would become an inspiration for the late nineteenth century ‘modern’ art movement now known as Impressionism. 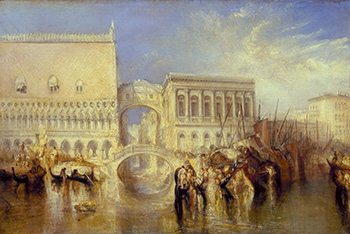 The works by Joseph Mallord William Turner had both a first and long lasting impression on two French artists.

For them that moment in time spent viewing Turner’s works would become pivotal. Pisarro had already established a comprehensive relation of light to the sky and the ground in his early works in France and Monet had decided he wanted to spend his life ‘expressing his own instinctive way of seeing the most subtle nuances of colour, atmosphere and light in landscape’. And so they both went back home and expanded the communication. Encountering a work by Turner one on one is a very powerful experience for everyone. He was a revolutionary image-maker of his day.

Ambitious early works revealed in a painting such as The fall of an avalanche in the Grisons 1810 display great drama and pathos, that interior world to which we are all drawn attracted by the many complexities and contradictions of life.

Turner was one of the first artists in Britain to use synthetic colours as they gradually became available, with chromium yellow becoming his favourite.

The transition from archaic alchemy to modern chemistry during the nineteenth century would mean that new metallic elements, such as Chromium, could be treated with different acids and combined with various other metals to provide a much wider range of colours for artists.

Chromium yellow, chromium orange and chromium red, as well as a completely new range of chromium greens became available. These pigments made in a laboratory setting were found to have all the properties, including durability and permanence, of their natural counterparts. 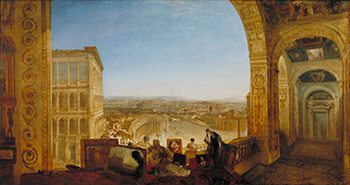 J.M.W. Turner, Rome, from the Vatican. Raffaelle, Accompanied by La Fornarina, Preparing his Pictures for the Decoration of the Loggia, exhibited 1820. Photo: © Tate, 2013

Turner was born into a family of modest means but had good health and a long life, which enabled him to pursue his artistic development to full fruition. He trained extensively inside and outside the Royal Academy Schools.

He worked as an architectural draughtsman and designed sets for the theatre and also worked with a group of aspiring enthusiastic young artists copying from prints, watercolours and drawings owned by physician and alienist Dr Thomas Monro who became the patron to numerous artists including Turner.

Turner’s lessons in topography helped him to develop his own impressionistic vocabulary of visual imagery. He filled hundreds and hundreds of sketchbooks on his own version of a ‘Grand Tour’ that saw him travel all over the United Kingdom and extensively on the Continent. He exhibited watercolours at the Royal Academy from 1790, and oils from 1796.

In 1840 he met and attracted the attention of the eminent writer and great art critic John Ruskin (1819-1900), who declared ‘Life without industry is guilt, and industry without art is brutality’. Ruskin became a great champion of Turner and his work and his argument for Turner’s genius ultimately grew into a five-volume story: Modern Painters (published 1843–60).

He was interested in all the awesome aspects of life in his times, including disasters and his famous scene of the Houses of Parliament being ravaged by fire is a powerful expression of the tragedy.

He witnessed the scene himself, recording the scene in both watercolours and oil paintings, which he observed from a boat on the Thames river. 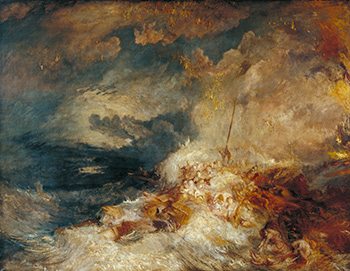 Upon his death, Joseph William Mallord Turner joined all the other notable Britons who had been buried in Saint Paul’s Cathedral. His bequest of 300 oil paintings and more than 20,000 works on paper soon entered the collection of London’s Tate Gallery. 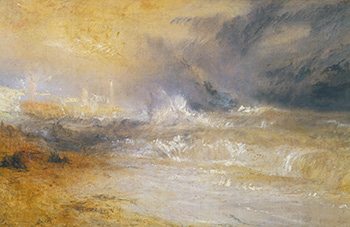 Turner during his career evolved his own technique, scraping, blotting and wiping the paint while it was still wet and also scratching into its surfaces when it was dry.

His vision was entirely emotional and grandly poetic, his emotions roused and stirred by the words that became the works of the Romantic poets, such as Lord Byron and John Milton, who both gave quotes to accompany his paintings in entries of the catalogue for the Royal Academy.

The expression he was able to convey had been honed by studying the old Masters of European art and also Giovanni Battista Piranesi (1720-1778) an Italian architect, designer and engraver of approximately 2000 views of the eternal city whose fantasies were about breathing ‘the ancient air’.

His work culminates with some of his most powerful seascapes. A disaster at sea c.1835 depicts the notorious wreck of a convict ship bound for New South Wales, in which all the women and children aboard drowned.