The Shrine of Remembrance designed in 1923 and completed in 1934, was commissioned and built by the state of Victoria in commemoration of the sacrifice made by many Australian men and women in times of war. Much of its design is based on architectural style that flowed between cultures of the world for centuries. Historically a strong connection exists between the commercial strength of a city, its civic independence and the construction of large buildings. The Shrine of Remembrance is an assertion of the nobility of a cause that in the 20th century, so many fought and died for. The anniversary of Jesus of Nazareth’s crucifixion on Easter Sunday 2016 was, for me, a perfect day to visit a sacred space set-aside for quiet prayer and reflection.

It was the day commemorating the sacrifice of just one man, who believed that if only humankind had faith in its own humanity it would be able to learn from its mistakes and to understand that love and forgiveness are at the very essence of life on earth itself The interior of the Shrine, this holy of all places presents with restraint, power and monumentality. As a defining structure, it is delivered with grace, elegance and just a dash of ornate embellishment. Originally designed by Melbourne architects and ex-servicemen, Philip Burgoyne Hudson (1887-1952) and James Hastie Wardrop (1891-1975) the Shrine of Remembrance was constructed following a competition with over 83 entrants

The heroic scale of the building honours 114,000 men and women who died defending Australia’s freedoms. Its size reflects the enormity of the shock, dismay and anguish felt by the community at large in the aftermath of The Great War (1914-1918).

It is now 100+ years since the Gallipoli Campaign of World War I took place on the Gallipoli peninsula (Gelibolu in modern Turkey) part of the Ottoman Empire, 25 April 1915 – 9 January 1916. This visit was the first time I had ever been inside this holy place and I must say that I was completely bowled over by the conception of its sensitively designed sacred spaces, remaining there for four hours, finding it difficult to tear myself away. A great deal about the evolution of design throughout history is visually represented both inside and out.

Set in its own open gardens, which isolate and give the tomb like structure prominence, the Shrine of Remembrance is superbly sited.

It is nearby to the old Observatory at the entrance to Melbourne’s Botanic Garden’s and to Government House and has spectacular views of Melbourne, aligned as it is with its heart.

When I entered first I felt to me as if I was inside a great cathedral in Europe or England, with some of their architectural influences and worship traditions infused into the design of this great Shrine. There was the very real feeling I was also in a great Greek Temple. Great black ionic style columns hold up the incredible stepped roof structure, which is based on the design of an ancient Ziggurat, forerunner of the pyramid.

In the main Sanctuary the all-encompassing sculptural frieze is of enduring significance, its bas-reliefs depicting tasks performed by service men and women carved in the main by sculptor Lyndon Dadswell. As at ancient Greece the frieze could be said to present a microcosm of life in Melbourne and a macrocosm of the Australian world.

Symbolically it links both to its sacred heart in an attempt to communicate with the divine. The main sanctuary is surrounded, as in a Christian church by an ambulatory, with four Australian flags visible on each entrance. They could be said to represent the four extremes of the cross of sacrifice; a symbol of the Christ. Traditionally an ambulatory in European architecture, is a walkway surrounding the ‘nave’ or the large public space inside a great cathedral.

This was originally designed for monks to traverse chanting the offices of the day.

However this great walkway in Melbourne has another purpose. It contains some forty-two bronze caskets holding Books of Remembrance with the names of all the Victorians who served during WW I and are continually changed.

There are 89,100 names written in extraordinary calligraphic script.

My next journey had me feeling as if I was in Egypt. I found myself relentlessly descending the stairs as if into the centre of the great pyramid of Cheops at Giza, or going under the surviving Ziggurat built for the pharaoh, Djoser at Saqqara in Egypt.

Instead I was accessing the original crypt, which is today surrounded by an all-new Visitor’s Centre and Education Centre, which have only been completed in the last decade.

These brand new spaces are about bringing all its facilities into the 21st century. There is an auditorium, a gallery displaying some 4,000 service medals, an exhibition space, a shop and a reception area. 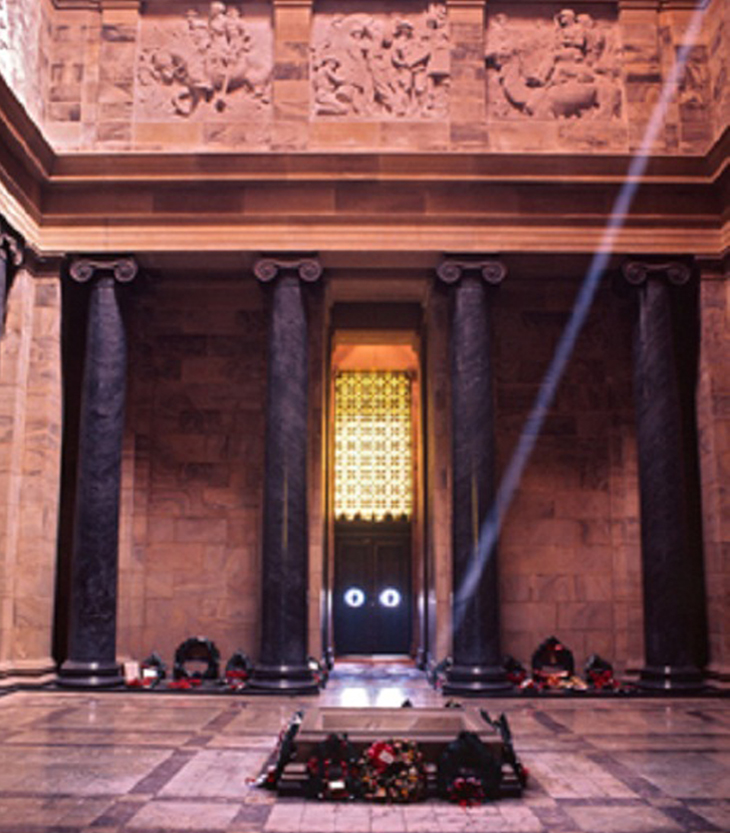 Saving perhaps the best for last, the design of the sanctuary accommodates a natural phenomenon that happens on the day of Remembrance each year. On the 11th day of the 11th month at the 11th hour the sun shines through the oculi or ‘eye’ sited at the top of a ziggurat styled stepped roof over the main commemoration hall. It illuminates the dedication to those who served, highlighting the word LOVE and has been designed to last five thousand years.

This mathematically designed device has an important precedent.

It was employed by ancient Egyptian builders in tombs and temples, including the great temple of Ramses II sited today high up on a cliff at Abu Simbel overlooking the banks of the Nile. 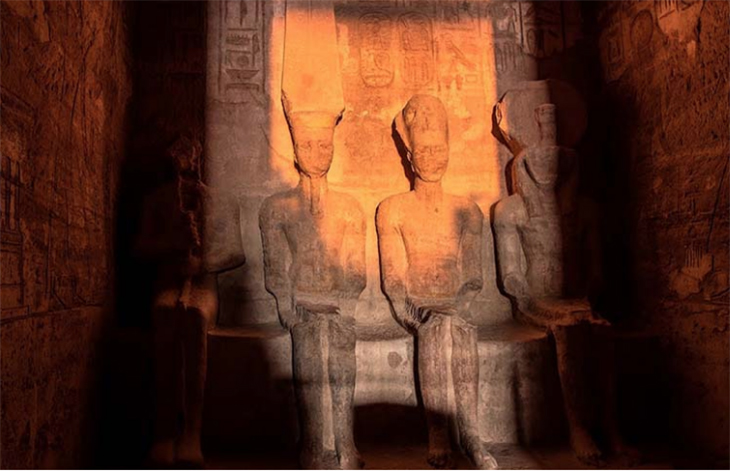 Originally the doorway was oriented so as to allow the sun into the interior of the temple so it could shine on the great Pharaoh’s face on the anniversary of his birth 22nd February and on the day he ascended the throne, 22nd October, Coronation day.

That spectacle continued for more than 3,200 years of Egyptian history but now it is one day out since the temple was lifted up in 1964 to be relocated above the threatening waters of the Aswan dam built in the valley below.

All the computers and mathematical minds in the world at the time, helping to move this cultural icon to save it for posterity, basically got it one day wrong.

However it still draws thousands of tourists to Abu Simbel to watch the ancient tribute to a pharaoh, whose name is still known up and down the Nile Valley for his military exploits and monumental building projects. Long may the tradition continue down-under, where the Shrine of Remembrance at Melbourne is a fitting symbol for the success of our multiculturalism.  It represents the nobility of all those it honours and commemorates for their service.

November 11th for World War I and June 6 for World War II are traditional days of reflection, although if we think on it, any day should do for us to remember and reflect on the ongoing fight to retain those rights and freedoms we enjoy today so valiantly defended.

It is an ongoing battle, against prejudice, injustice, infamy and repression.