The whole history of the world is summed up in the fact that, when nations are strong, they are not always just, and when they wish to be just, they are no longer strong* In March 2011 our correspondent at London provided us with information on the many and varied new television series, some short, some long, that were all seemingly churning out of that august city in the moment. Some really riveting stories were revealed in the first series of the six part television series out of the BBC at London – ‘Silk’.

This one, it seemed, certainly was a cut above the rest as it gained momentum. Eventually it panned out to be a slick wonderful production that gathered you up and addicted you to its weekly stories so if you don’t want us to spoil it for you don’t read on.

There was sex, drinking, drugs, pimps and rent boys in the upside down world of barristers and their clients. There was judges, juries, court clerks, chamber clerks and pupils learning. The pupils all started with stars in their eyes but soon become disillusioned as dreams dissolved and reality set in.

It was an outstanding series that many could not wait to return, which it has in 2012. If the first two episodes of Series 2 of Silk screening on May 15 in the UK is anything to go by, perhaps the best is yet to come. This is a truly outstanding show wonderfully acted and written.

Being a barrister, according to Silk’s writer Peter Moffat, who should know as he was one, is about extreme pressure, hard choices, ethical dilemmas, the overlap between personal and professional, the principles fought for and those principles that are sacrificed in the name of justice.

Then there is the Machiavellian angle –  an end justifying the means style of politics. Moffat also says “life at the bar is the richest possible drama territory”

Silk is a natural fibre created by worms, that when woven as cloth refracts light coming from all directions and produces different colours. It is an ideal metaphor for the legal profession with its shimmering slippery stories of being ‘at the Bar’, which is in no way a barrier to achieving success. It is not just all about me, it's about my client says Martha to Clive her rival for Silk in Series 1

Written by BAFTA award winning writer Peter Moffat, the first six part series Silk was about a bevvy of junior barristers working in ‘chambers’ at London where they were attempting to “take silk” and become Queen’s Counsel (Q.C.). Then, and only then will they be allowed to wear the robes, made of coloured silk, that go with the position. In order to qualify a lawyer has to serve as a barrister, solicitor or, in Scotland as an advocate for at least ten years.

Only one could win and Martha Costello, played so brilliantly by Maxine Peake, has a great new wig to wear. The cast playing alongside her is certainly impressive. Barrister Clive Reader is former Spook’s favourite (Rupert Penry-Jones), together with as Senior Clark of Shoe Lane Chambers Billy Lamb (Neil Stuke). Nick Slade (Tom Hughes) and Niamh Cranitch (Natalie Dormer) were pupils in series 1 and together they all raised the bar very high indeed.

In Series 2 the main protagonists are joined by Phil Davis as Micky Joy, who really knows how to define evil in a quiet way, and an acting heavyweight of the old school, Frances Barber. She plays Martha’s opposing Q.C., who appropriately is nicknamed Lady Macbeth on account of her ruthlessness.

She warns Martha that while their personal relationship will be one thing, in court all that will change and she will use any, and all means at her disposal, to win her case.

However, as it turns out she does misunderstand Martha’s total commitment to real justice, which is more than humbling as she fights to reveal the truth behind a vicious attack perpetrated by her client, who has clearly been manipulated in a horrible way.

His proven innocence eventually costs him his life and leaves the viewer coping with the conundrum about how complicated life can really turn out to be and that juries have to struggle with so many issues to reach their decisions. 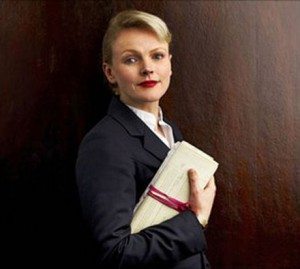 Martha Costello, everyone is innocent until proven guilty Photo from BBC/Phil Fisk

Her resolve and mettle is constantly challenged by clients who are sometimes good, sometimes bad and sometimes positively evil.

Writer Peter Moffat said in an interview for BBC News about the first series that he wanted to avoid the female lawyer so often portrayed by Hollywood – successful yet single, and unfulfilled.

“I don’t think it’s just Hollywood,” he said. “Apart from Helen Mirren, you struggle to come up with a single character-led drama led by a woman. “And not have that woman have as her only big issues whether or not she’s going to be with the man she quite fancies, and whether or not a baby might get in the way of her professional existence. “It’s great to have Maxine Peake,” he continued. “She’s really real and not obviously barristerial”.

Are you quite sure, Martha is asking the accused

Single minded and stoic Martha Costello, who we found out was pregnant in the first series, has no use at all for internal politics, other ambitious barristers, dirty cops, corrupt judges, and anything else standing in the way of natural justice. Even her baby, which she ended up losing, would not have compromised her true and moral self.

Tragedy and drama abound in this amazing show, and Maxine is certainly at the ‘peak’ of her career. Her acting abilities are outstanding and she is very convincing. It is hard not to believe that you are actually in the court watching the proceedings first hand. She should gain an award for this work.

There is much intelligence being bandied about as each episode grapples with very complex legal, moral and social issues. They are thought-provoking and focus attention on interesting legal dilemmas and moral ambiguities. It is well-crafted entertainment that’s both thought provoking and engrossing. 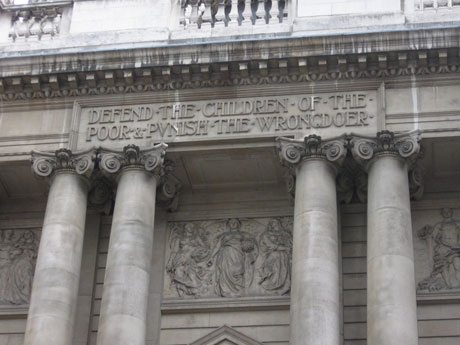 The Old Bailey, where justice is served

“For me Spooks set the bar very high” Penry-Jones reminisced when speaking to a BBC Entertainment reporter, “And, I don’t want to come in underneath that‘.

The world of the bar at London today seems very different to the world of Rumpole of the Bailey, well known author John Mortimer’s freelance freedom fighter, who was depicted in 42 episodes that ran from 1978 – 1992 on British and Australian television. Rumpole, a master barrister at the Old Bailey

Starring Australian born British actor Leo McKern as the indefatigable barrister who defended any and all clients, Rumpole achieved almost legendary status and the greatest popularity in television history.

Wearing wrinkled clothing and enjoying a tipple or two of his favourite wines – a low-rent claret Pommeroy’s Plonk or the more refined ‘Chateau Thames Embankment’ he was a passionate defender of civil liberty. In Rumpole’s eyes everyone was presumed innocent and deserved the best defense possible.

Being ‘called to the bar’ or being ‘admitted to the bar’ is one of those terms that is a puzzlement for many, although they most likely associate it with those who practice law, or the legal profession in general.

The origin of the legal term ‘bar’ comes out of the Middle Ages when in a medieval European courtroom a ‘barrage’ was used as a barrier to separate the public from legal professionals and people on trial. It served the same purpose as a balustrade in a French King’s bedroom, where behind it only Princes of the blood could serve the King, while outside members of the public wishing to present petitions to the King, waited. In either case no way has the bar impended success, it was only about perceptions and wanting the law to remain untainted.

Says Moffat, whose vulnerable and confused good looks belies what is going on inside,  “As a ‘baby barrister’, you are thrown in at the deep end and have got nothing in terms of a brief. You might have one sheet of paper with a name, and the court time. It’s absolutely terrifying.” 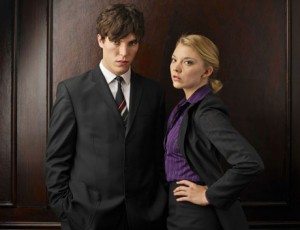 Nick Slade (Tom Hughes) and Niamh Cranitch (Natalie Dormer) in Series 1 of Silk, lambs being led to the slaughter - Photo from BBC/Phil Fisk

The baby barristers in Series 1 of Silk were like babes in the woods, or lambs being led to the slaughter. Those hunting the fox were in control at every turn and Billy Lamb (Neil Stuke), the aptly named Senior Clerk of the Chambers, has the power to ultimately decide who to send for Silk and who would stay behind and continue to make money for him.

Nick Slade, played by Tom Hughes, was Martha’s pupil while Niamh Cranitch, played by Natalie Dormer, was Clive’s pupil. They were a very attractive pair. She was the tougher of the two. And her father a judge, so she knew about law. Nick, however, turned out to be more than he seemed, which included being a shoplifter and petty thief. 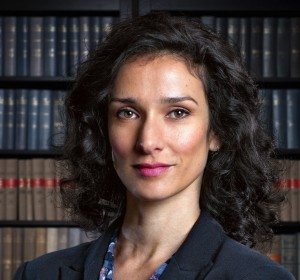 It is hard not to feel sorry for the defendants when the brief is only placed in the barristers hand at 6pm the night before a trial when everyone else would be heading for home and hearth. There they are burning the midnight oil endeavouring to take in the information they need to provide at least a pretense at defense for their clients.

In Series 2 actress Indira Varma has also joined the cast as the very principled solicitor George Duggan, who is a challenge for Clive Reader as she initially fails to react to his charms. She has plenty of character and will continue to be a part of this cracking good show. Episode 2 of the second series sees Martha involved in a military court at a court martial and, as usual, everything is not what it seems and it takes a great deal of unravelling to get to the truth.

Silk is known for its enduring quality. It is not static, retains a tensile strength and, based on the beginning of Series 2 it is certainly not expected to lose its lustre any time soon.

The Met in NY has a great diversity of displays of art from different cultures and in many mediums, including the beauty of 18th century pastels now on show