There is nothing quite like the transforming nature of Spring, especially when the sound of music comes packaged up and delivered by an orchestra and a lady who both have gained a reputation for delivering great music fearlessly.

International superstar German soprano Simone Kermes has been dubbed a ‘rock chick’, the ‘Lady Gaga of classical music’ with her fabulous costumes, over the top hairstyles and wigs, luscious rich red lips, flaming red locks and great stage presence. She is undoubtedly a spectacular coloratura soprano who sings as if there is no tomorrow, which particularly inspires one’s spirit in Spring, especially after a long cold and bleak winter as beautiful blossoms bloom bounteously and we begin to appreciate and embrace the abundance of life.

Glittering arias written originally for castrati, whose vocal dexterity was a key to their success until society outlawed the practice of castrating young boys to keep their voices high, are on a masterful program for “Fearless Baroque” a spectacular concert to be presented by the Australian Brandenburg Orchestra this Spring. This wonderful concert will feature Simone Kermes, whose voice will resonate with great clarity in the landmark recital halls at Angel Place in Sydney and at the Elizabeth Murdoch Hall, Melbourne.

Baroque style music of the late seventeenth, eighteenth and early nineteenth century was joyous, often very sophisticated and extremely elegant. By and large it favoured simplicity over complexity and also had a taste for structural clarity. This emphasis worked its way into the world of music taking it forward towards a style in which a melody was preferred

What a fabulous season the Australian Brandenburg Orchestra are having in 2013. I am also looking forward to hearing Matt Bruce, the orchestra’s Concertmaster, who will feature at this concert as well.

He will step out as a soloist to play with the orchestra the spectacular Violin Concerto in C Major RV 190 by progressive composer Antonio Vivaldi (1678-1741) whose music is full of layered rich textures.

Vivaldi had a great ability to use dramatic effects to highlight wonderful rhythms and fluid melodies, which was second to none in his time. This piece is brim full of possibilities and offers a passionate view of a life full of music he so loved.

Vivaldi profited greatly from the cultural climate of the different cities he lived in, including Venice, Vienna and Rome. His vast output included substantial quantities of chamber and vocal music, some 46 operas and a remarkable 500 concertos… some 230 solo violin concertos.

He was one of those completely transforming the tradition of descriptive music in which the strings play a major role. His concertos were enormously lyrical wonders and very successful, this one is full of vigour and the largo movement is sure to be a sensational treat 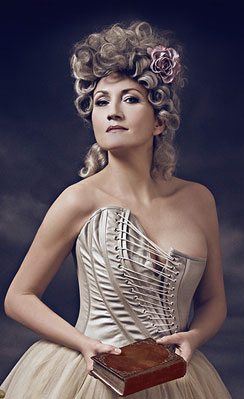 For those not familiar with the ‘coloratura’ term, it means a singer with an ability to colour the voice; sending it high and low, leaping, bounding and trilling, sending terrific little tingles right up and down your spine.

There are no boundaries Simone Kermes won’t cross in her quest to bring the sounds of the marvelous music she loves to a new generation. She wants them to witness the sheer genius and beauty attached to composing great songs and singing magical music in the European Baroque style.

Such great voices as Simone Kermes reflect all that is good about music, about life and how the cross connections of culture we can share today will help to break down barriers in a spirit of peace. This is music that intensifies emotional values to such a degree that it can help you to change the way you approach and live your life.

Eighteenth century opera was the music of love and life; ‘action in music’. Simone Kermes is thankfully breaking all the unwritten rules about how operatic music should be presented, laid down by those who seek to make it elitist. She is helping bring opera and the operatic style voice into the new age in a way today’s young people can understand and in a style they will easily embrace.

Lyndon Terracini of Opera Australia and his colleagues in the world of music, who have a horror of ‘patrician entitlement’ and have actively sought such change in Australia must be cheering. For my part I know I am. 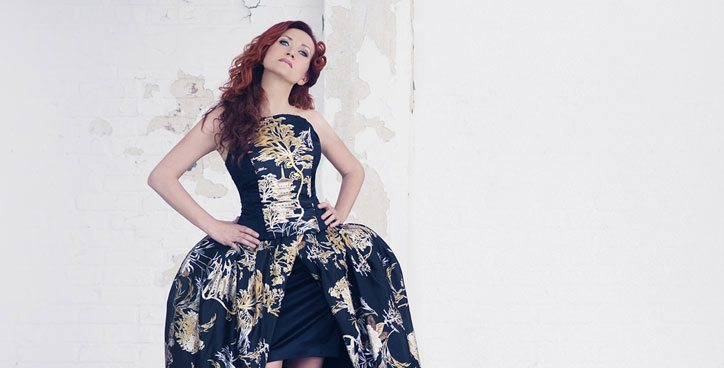 Many opera lovers fear the word ‘popular’ because back in the day, in the way distant past, popular had a connotation of being less than good, when today it clearly doesn’t.

If ever a discipline integrated the unconscious and emotional aspects of the mind with the intellectual and physical movement it would be the voice as it sings sweet sounds of music.

While being associated with entertainment and frivolity, music is also a powerful form of communication vital to our inner wellbeing. Such sensational singing has the power to influence every culture and age. The program has been well chosen, with the orchestra interspersing some wonderful instrumental Baroque works throughout the aria filled program.

They will commence with the Overture to Agrippina by Italian composer Nicola (Niccolò) Porpora *1686-1768) followed by Simone Kermes singing the Aria “Vedra turbato il mare” from his work Mitridate.

Porpora was a man of considerable literary culture and the most famous composer of his own day. He also taught the most famous castrato of his day Carlo Broschi, called “Farinelli” who also sang the maestro’s arias. Another of the Brandenburg’s outstanding guests this year Philippe Jaroussky, a spectacular coloratura countertenor, introduced Australian audiences to some of Porpora’s amazing works.

It’s perhaps a little known piece of trivia composer Franz Joseph Haydn had a stroke of luck, which landed him employment with Porpora as his valet. In return for shining shoes and other menial work Haydn received theory lessons while making many connections that began the momentum of what would be Haydn’s own spectacular career.

A highlight will be the spectacular Aria “Se doppo ria procella” from Germanico in Germania by Porpora. This is an aria written for Gaetano Majorano (1710 – 1783) known as Caffarelli, who was yet another of the super star castrati of the Baroque era.

If a ship is guided to port
by the light of a friendly star
after a raging tempest,
the greater the relief
felt by its fearful steersman.

And if after so many torments our hearts can rejoice sweeter still will be the pleasure they feel. The Sinfonia in g minor written for 2 flutes, 2 oboes, 2 violins, 2 violas, bassoon and basso continuo by Venetian composer Tomaso Albinoni (1674-1745) will be a joy. Albinoni was among the most eminent of great artists of instrumental music during his day.

He and his colleagues completely abandoned themselves to the sensuous charm’ of the violin, sacrificing some of the purity of the early Baroque style to ensure it kept growing.

During this very stylish period the enthusiasms and exuberances of an epoch manifested itself in the sounds and songs of great composers who were striving to produce works that exuded ‘noble simplicity and quiet greatness’, qualities enlightened’ men and women were seeking to gather unto themselves. A brilliant ad by the ‘Apple’ corporation, depicting people from all walks of life and from many different cultures and all ages enjoying music, tells a very simple and telling tale about how connected we are globally by the sounds of our society.

Hopefully some of them will be listening to Simone Kermes wonderful new CD – DRAMMA, La Magnifica Comunita! Am already treasuring my copy.

Simone Kermes is an international superstar notes Paul Dyer, with far ‘more drama than the election campaign…and she also has way better frocks’.

Should be another great treat for concert goers in 2013.

Can’t wait for this new and wonderful experience in the thrilling adventure that is music, especially when played by the Australian Brandenburg Orchestra.