Who wages war on families? Tyrants and thugs of all persuasions. Amongst world ethnic groups, Jewish communities have suffered most – anti-semitism, a loathsome creature, lurks in deep dark places; the agendas of power hungry political groups, the psyches of malcontents and the aims of fanatical religious groups.

Whenever an opportunity presents, it emerges from the depths to wreak havoc on Jewish people. Men and women of goodwill everywhere, condemn these actions and try hard to find the perpetrators; sometimes successful, despite the punishment meted out these racially motivated acts of terror continue. Steven L. Richards’ new book, Sitting on Top of the World, tells the true story of two young brothers, both born in Germany just before WWII to a Jewish mother, Ilse Ettlinger and a Protestant father, Julius Walker. Some of the 48 children at the safe house in Aspet, France shortly after his arrival in February of 1941. Kurt is standing in front of the man

This an important book for two reasons. The first is the the detailed explanation of social conditions in Germany before and during WWII which includes the rise to power of Adolf Hitler’s Nazi Party leading to the systematic murder of European people of Jewish origin. The second is the factual account of the effect the Nazi regime had on the lives of the Ettlinger family of Jewish faith and the Protestant, Walkers.

The account of the lives of these two working class, unremarkable German families who lived their lives against an historical backdrop of financial chaos and great political change. This includes the Russian Revolution, The Great Depression and the appointment of Adolf Hitler as German Chancellor and the book makes for compelling reading. The narrative is engagingly presented in an ‘eyewitness’ account style.

The story deals most particularly with Isaak Ettlinger, his daughter Ilse and his grandsons, Kurt and Heinz.

Ilse, a sweet, young, Jewish woman, falls in love with protestant, Julius Walker, a man who likes a drink or maybe three.

Isaak is horrified by Ilse’s association with a non-Jew and a rift opens up between father and daughter.

Ilse, alone and pregnant, marries Julius only a matter of weeks before the arrival of her eldest son, Heinz.

Ten months later, she gives birth to another son, Kurt. The marriage, shaky from the beginning, Julius is violent and a poor or non-existent provider. He disappears for weeks at a time and Ilse has to work as a seamstress to provide food and shelter for her babies. 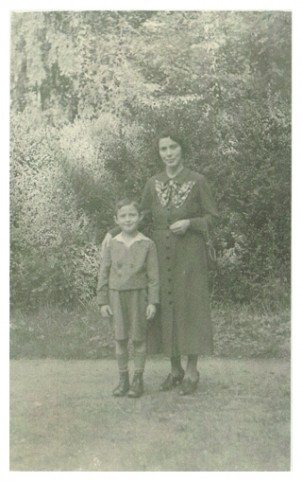 Last photo of Kurt with his mother

She asks Julius’ mother for help. An arrangement is reached: Ilse must allow her eldest son Heinz to live with and be given a protestant upbringing by the Walkers. Part of the deal is that Ilse will cease contact with Heinz and that neither Kurt or Heinz will know of each other’s existence.

Heartbroken, Ilse, with no financial or family support, has no choice and hands over the upbringing of Heinz to her husband’s family.

Trying to provide for herself and Kurt, a struggle, Isaak allows Ilse to move back home with the proviso that he becomes Kurt’s legal guardian ensuring he is brought up in the orthodox Jewish faith.

While Ilse and her sons are caught up in family problems an insidious evil has taken over Germany’s political future; the Nazi Party is elected and legislation giving Jewish people German citizenship is rescinded.

They were the lucky ones, life becomes grim for German Jews. Rounded up with other Jews, Ilse and her family are given thirty minutes to pack and are then forced to board a train – the destination: Camp Des Gurs, an infamous French concentration camp.

Conditions in the camp, far worse than terrible, many die in the first week of arrival, those who survive get little food, living in freezing, wet, disease and bug ridden wooden barracks.

The description of the camp is immediate, vivid and quite horrifying. What is amazing is that despite their disgusting imprisonment Jewish refugees maintain their humanity, setting up help networks and an infirmary to relieve the suffering.

Ilse, separated from Isaak, is approached by a member of a Paris based Quaker group who requests permission to put Kurt on a list of children to be sent to America. At first, Ilse refuses but later realises: for Kurt to survive, she must agree. Kurt standing with his friend, Fritz and his siblings in front of his friend’s father’s business

Author, Steven Richards, a Chicago based trial attorney, found time to answer questions on the motivation behind the writing of Sitting on Top of the World:

Q1. There are many stories from the Holocaust; all of immense suffering – what was it about Kurt and Heinz’s story that caused you to devote seven years to researching it and then record it in book form?

This simple and direct question is one that I have asked myself many times over the years. In the beginning it was simple curiosity. In the end I think the answer is complicated for me. I am not keeping the profits.

This has been important to me for a number of reasons. I am not a member of the Wagner family (Kurt was adopted by the Wagner family) and as such, I do not think it is ethical for me to make money off of this story.

I consider myself the caretaker of this story. Therefore, by definition, I cannot be a profiteer.

The process of researching and writing this book has clarified for me that I have wanted to be (other than my family) involved in something where money is not the goal. It is the opportunity to write this story that has given me immeasurable wealth. I do not wish to come off as being so noble.

I have spent some 5000 on this book and there were many times I wanted to give up, because I felt I did not have the skill set to carry this off. Self doubt became my middle name. 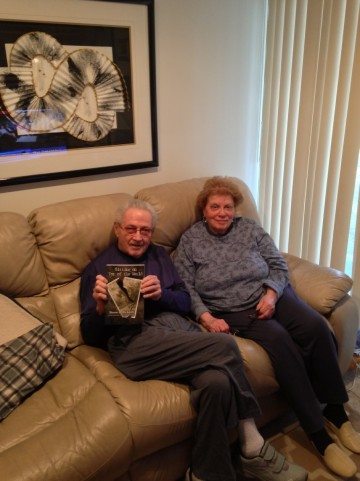 In the end, I think this is an important story and I saw no one doing anything to preserve it. I guess I was the last man standing. I am a very lucky person.

Q2. Your book at 516 pages is not only an ‘eyewitness’ account of the Ettlinger and Walker families’ daily lives during WWII but provides extensive coverage of  legislation created by and the prevailing attitudes of Non-Jews in Germany and France. Was there anything else you would have liked to include but size constraints wouldn’t allow?

In the beginning I envisioned this book being a trilogy: Germany—France—America. I wanted to go much more in depth from a historical and narrative perspective, but since this book is the result of twenty drafts (I am fifty-nine) I did not want to burden one of my kids with this project! LOL

Returning to being a full time lawyer and member of my family. I hit a home run with the gift of this story. It is for others to determine if the book meets the subjective criticism of the reading public. I do not think there is something out there that interests me enough to try this again. I am a member of the One and Done Club.

There are not many happy endings in this book but there are many heroes: the Paris Quaker group, Alice Resch who cared for the Jewish children waiting to be sent to America, the Jewish organisations and foster parents who sheltered the children in America, Ilse, her family and all the Jewish people murdered by the maniacal savagery of the Nazi Party and Steven L. Richards.

He cared enough to devote seven years of his life to write Kurt and Heinz’s story – Sitting on Top of the World, a well written, must read.

From the 5th to the 15th centuries in Europe monastic orders and Christian mysticism flourished. Italy’s painter and architect Raffaello Sanzio da Urbino (Raphael) (1483-1520), in a work known as the School of Athens (1508-1511) depicted the two worlds of Christianity and paganism facing each other as equals. The ‘pagan…