The Metropolitan Museum of Art in New York has on display as the centre piece of a unique and very special exhibition, an ancient bronze sculpture entitled Sleeping Eros. It is considered by curators as one of the finest examples of its kind anywhere in the world and, very definitely in a class of its own.

It is a very clever, creative and innovative composition and thought to be the work of a major sculptor from the Hellenistic period (323 – 27 BCE) the period when Greek culture spread in the non-Greek world following Alexander the Great’s conquest until the emergence of ancient Rome. This happened when the Roman soldier Gaius Octavius (Rome’s 1st Emperor Augustus) defeated Mark Antony and Cleopatra, invaded Egypt and took it as his own personal fiefdom completing both the destruction of the Hellenistic kingdoms and Roman republic, and ended (in hindsight) the Hellenistic era.

While the Sleeping Eros has undergone repairs and lost some of his original parts (his arrow and quiver are gone) he is in fact very finely made and beautifully conceived. Representing him asleep was an extraordinary conception for its time. Scholars assume that he more than likely was originally displayed in a private setting, perhaps in the courtyard of a villa in Greece or in a Roman territory.

He is a characteristic example of how a bronze statue was made in antiquity. Hollow-cast by means of a combination of the direct and the indirect lost-wax processes, the statue was created in seven sections that were joined together. The castings have very few imperfections, though occasional hammered rectangular patches are visible. Additional cold working was done as part of the finishing process.

Scholars have long wondered whether this fine sculpture is an original Hellenistic work or a very fine Roman Imperial copy. Variations of the type are known from hundreds of sculptures, which, to judge from the number of extant replicas and adaptations, was one of the most popular ever produced in Roman Imperial times.

This reduced version of a Greek Bronze statue of the 3rd or 2nd Century BCE was made somewhere between the 1st century BCE and the 2nd Century AD.

The largest known of the replicas were reproduced in Bronze, Teracotta and Marble during the Roman Imperial period.

It was also among the earliest of the ancient classical statues rediscovered during the Renaissance, when Italian artists revisited the themes of their ancient past. Michelangelo himself, very early on in his career, made one that he passed off as an ancient sculpture. Other artists looking for inspiration made works that were close likenesses or less literal interpretations. Gaia and Eros according to the ancient Greek source Hesiod (c700 BCE) were primordial gods (they had no parents) who were actively involved in the coming into being of the cosmos. First there was Chaos, then Gaia (the Earth) and Tartarus (Underworld).

Eros was among the first to see ‘light’ and, as a cosmic primordial deity tied to creation, he has been frequently associated with plants and fecundity with the rose becoming his most sacred flower.

One image of him from the 4th century BCE on the back of an Etruscan Bronze Mirror depicts him fishing with his mother Aphrodite, perhaps alluding to the pursuit of love and its unpredictability.

In ancient Greek mythology Aphrodite, the Goddess of love and desire was said to have risen naked from the foam of the sea and reputed to have stepped ashore at Cythera in the Ionian islands where grass and flowers sprang up wherever her feet touched the earth.  Her divine duty was to make love and inspire others to do so. Eros at this point became her son; the God of Love, fathered by Ares the God of War.

Ancient Greek philosophers reflected on Eros and his power and pondered his very centrality to human existence. 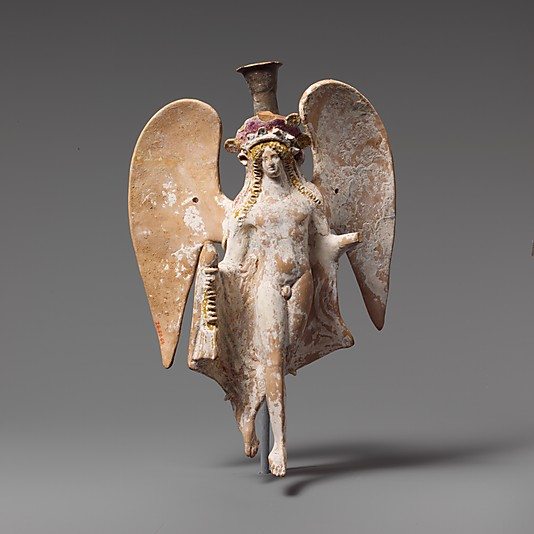 Terracotta lekythos in form of a flying Eros, 2nd half 4th century BC courtesy The Metropolitan Museum of Art New York

Although vases in figural form were known in Greek art since early Archaic times, during the fourth century B.C., a particularly elaborate combination of vase and terracotta developed originally embellished with color. This one from the 2nd half of the 4th century BCE depicts Eros holding an incense burner.

There are similar representations on red figure Greek Pottery of the time and numerous small-scale terracotta votive figures representing Eros have been found in Greek sanctuaries to Aphrodite, Apollo, and Artemis on Cyprus.

Eros was often described as perhaps being bittersweet. Some Greek lyric poets and tragedians stressed his omnipotence and cruelty. ‘What thing is love for (well I wot) love is a thing, It is a prick; it is a sting, It is a pretty, pretty thing, It is a fire; it is a coal, Whose flame creeps in every hole.’

Images of Eros are recorded in the Hellenistic period among the temple treasures of the Athenian Acropolis. Eros was worshipped with Aphrodite in a sanctuary sited on the north slope of the Acropolis and in a temple by the Ilissos River. Terracotta kalpis, scene reveals woman burning incense on an altar as she is crowned by Eros or one of his brothers Himeros or Pothos courtesy The Metropolitan Museum of Art, New York

At Megara near Athens, a temple of Aphrodite once housed the most famous statue of the goddess and her three sons. They were Eros (Love), Pothos (Longing), and Himeros (Desire) and all were said to be made by the late classical sculptor Skopas.

As a companion of Venus in her Roman manifestation, he became known as Cupid and he could be both young and beautiful.  In this way Eros gradually became a widely used emblem of prosperity belonging to the worlds of both Venus and the God of Wine, Bacchus.  As time progressed he turned into a rather chubby mischievous little boy. The popularity of the image of the Sleeping Eros through time has been a major source of inspiration for the proliferation of putti and cherubs from antiquity to the present day. Guido Reni produced paintings of the dozing deity, whose face was entirely angelic. This seventeenth century image by Bartolomeo Coriolano is in that vein.

Eros as Cupid is called upon at least once a year on St Valentine’s Day to make his presence felt, and also has had a lot to do with the production of ‘Love Jewellery’ from Cupid to Cartier.

This exhibition presents the results of a recent study of the Museum’s statue, utilizing scientific and technical analyses as well as art-historical research, which supports its identification as a Hellenistic bronze but one that was restored in antiquity, likely during the Roman Imperial period.

To judge from the hundreds of replicas, the sleeping Eros and its many adaptations and variations—as sleeping Cupids and even Somnus, the Roman personification of sleep—were especially popular during the Roman Imperial period.

Particularly notable are the diverse contexts in which these sculptures were displayed. As in the Hellenistic period, statues of sleeping Eros continued to be offered as dedications at sanctuaries, but they also decorated Roman public baths, fountains, and private villas. The type was well suited for funerary use, and sleeping Eros/Cupid sculptures became popular tomb monuments, especially those made for children. The image was adapted for a wide variety of uses, from its appearance in relief on sarcophagi, marble urns, and altars to mosaics, wall paintings, gold jewelry, terracotta lamps, and an array of other objects.

The exhibition is made possible by The Vlachos Family Fund.

Faith lights up the whole world is the simple message of Mary of Magdela, in a movie about this sainted lady in history, directed caringly by Garth Davis (Lion)