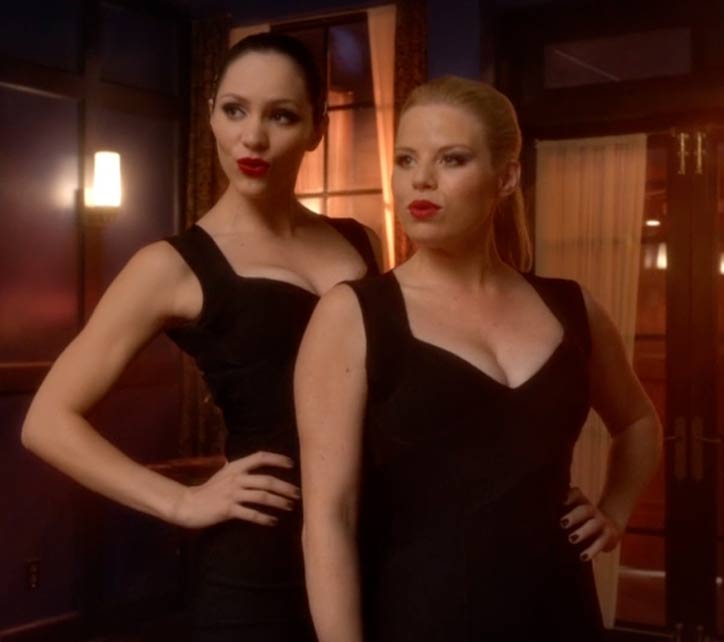 “SMASH” is a musical television series that some would say has it all. It certainly showcases the extremes of the creative life, particularly in the competitive world of singing and dancing on stage, where lines can so easily become blurred as life swings from fantasy to reality and back to fantasy again.

Series 2 of SMASH has just started, our American correspondent tells us, so if you don’t want us to spoil any surprises don’t read any further.

On Broadway is the first of two back to back episodes that commences the second season. The Fallout is the second. SMASH’s two main protagonists for the part of Marilyn Monroe in the musical ‘Bombshell’ in the first series Karen (Katherine McPhee) and Ivy (Megan Hilty) are back again, although barely speaking to each other despite having to appear on stage together.

It did not go down too well last season when Karen found out that Ivy had slept with Dev the man she hoped to marry, quickly and dramatically ending the relationship. It had  happened just before she went on stage at the out of town preview of ‘Bombshell’ that started her on the way to stardom, and gaining celebrity status. Oscar, Grammy winner Jennifer Hudson already has celebrity status and is certainly a ‘SMASH’ in the first episode of this second series, belting out a great number with jazz overtones.

She also duets with Karen our ‘Bombshell’ star, as the ‘creative team’ begin their marketing campaign towards making the announcement of Marilyn’s musical Bombshell’s final arrival ‘on Broadway’ after a successful season out of town in Boston.

The fall out from the departure of Uma Thurman’s character last series is ongoing, as is the back biting bitchiness of the rest of the cast behind each other’s backs.

Julia (Debra Messing) moves in with her writing partner Tom, (shades of Will & Grace – he even makes a crack ‘it’d be like a ‘sitcom’! ) Is he writing with someone else behind her back? What did those flowers he received with the note mean?

Julia’s husband Frank exits dramatically stage left in the first hour and like most people I suspect, our American correspondent was glad to see him go.  This causes Julia to become a couch potato until Tom rouses her out of her depression to attend a big bash to promote ‘Bombshell’. Getting into bed with the Director to get ahead just isn’t kosher any more. Drop dead gorgeous Director Derek is back and in deep trouble as ex show stars and chorus girls line up to file sexual harassment charges against him. He cannot believe that women don’t love him.

There is a wonderful dream sequence with a depressed Derek and girls all wearing sensational black dresses, with slicked down hair, huge red lips and hot pink shoes a la Robert Palmer’s music videos that’s a great deal of fun. – Would I Lie to You Honey!

Eileen the producer is played feistily by Angelica Huston. She is still endeavouring to stop her scheming ex husband from ruining all her chances of having a hit show. He’s revelling in the whole process of plotting and planning to bring her down any way that he can. What a heel and such a child !

He sneakily rats her and her backers out and suddenly Bombshell is in trouble with the Tax department. Seems all that lovely cash money Eileen’s bartender lover gave her in the first series to fund the show has been lurking without intent under a pile of floorboards somewhere for a while!

The musical’s debut On Broadway is postponed indefinitely. This means the cast are all at loose ends and feeling very let down. Drowning her sorrows in a nearby bar that just happens to have a piano playing bartender Karen discovers the show’s two new additions. Jeremy Jordan as Jimmy and Andy Mientus as his songwriting buddy Kyle, giving us the idea there is a new musical in the wind.

Karen singing Jimmy and Kyle’s new sexy rock number is ‘caught in a storm’, after performing a song reputedly penned by this new duo, which is a SMASH! Although its composer Jimmy doesn’t seem to like the idea of being a success at all.

Can Karen make him see that he has a potential ‘hit’ musical at his fingertips! Will Derek like the idea of this very different musical as his new ‘show’.

Our correspondent reports that Liza Minnelli, Rosie O’Donnell and Matthew Broderick will all make appearances as themselves in future episodes with Jennifer Hudson popping up again from time to time.

So foreseeing the plot ahead… will Ivy, who in this gets to sing a Marilyn song in front of the big-wig sponsors and movers and shakers of Broadway, finally get to play Marilyn on Broadway fulfilling her dreams?

And will this mean that Karen gets to star in a whole new upbeat ‘hot’ new show with Derek as her Director?

Just imagine the opportunities for new and exciting choreography! What will those boys call it…Hit List? Whatever, it’s sure to be a SMASH!

Smash Sisters Version of Would I Lie to You

Thrillingly staged with every frame Spielberg’s Bridge of Spies is an exceptionally fine piece of film making, ravishingly designed to make us feel the cold war