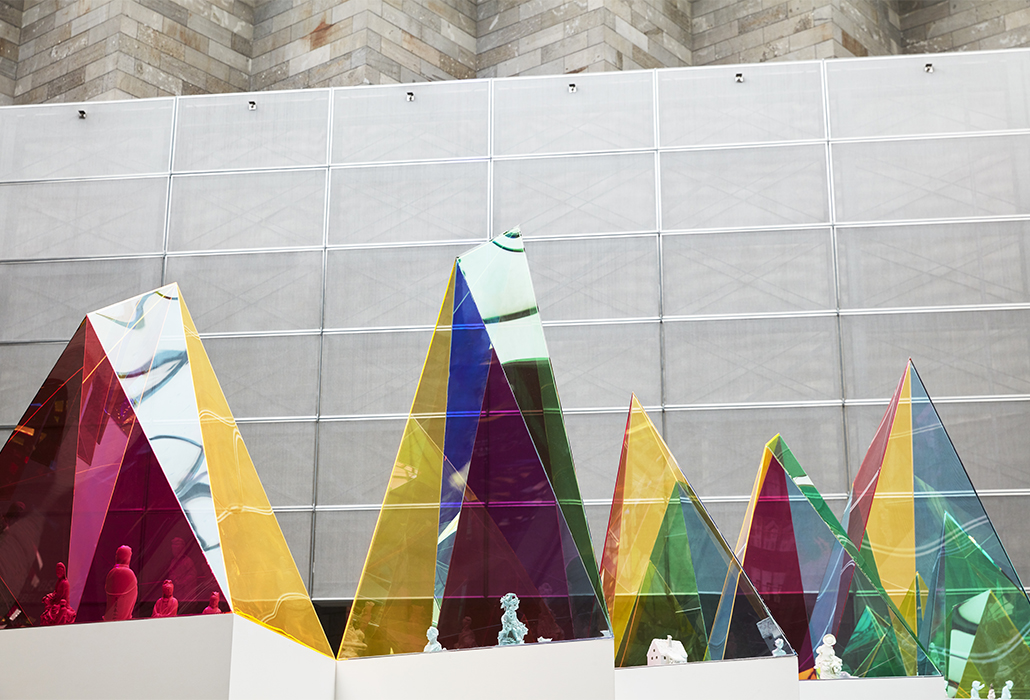 Creating a dialogue between historical artefacts and contemporary design in architectural practice is the raison d’étre of a new exhibition SO-IL: Viewing China, which is located within the Federation Court at NGV International, being presented until August 4, 2019, and as a highlight of Melbourne Design Week (14 – 24 March 2019). 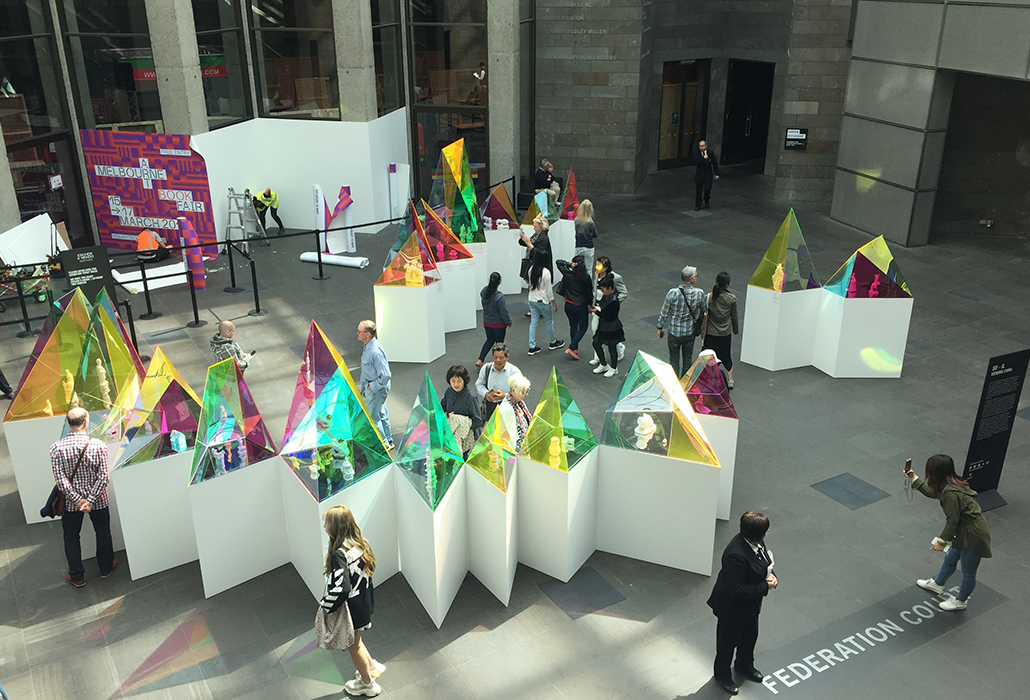 This display is all about the here and now. It tells the story of how, through our arts and cultural institutions all around the world, we are creating conversations, which not only help to define us, but also seek to help us met- morph successfully into the future together.

At home in the present age, our preferred design is for sleek uncomplicated furnishings and fittings. They allow our mind to rest following a frantic day in the ‘office’ where more than often, the workplace is often cluttered, as staff focus on minutiae of detail. Without it, contracts fail, people squabble and in the end, results and outcomes suffer. 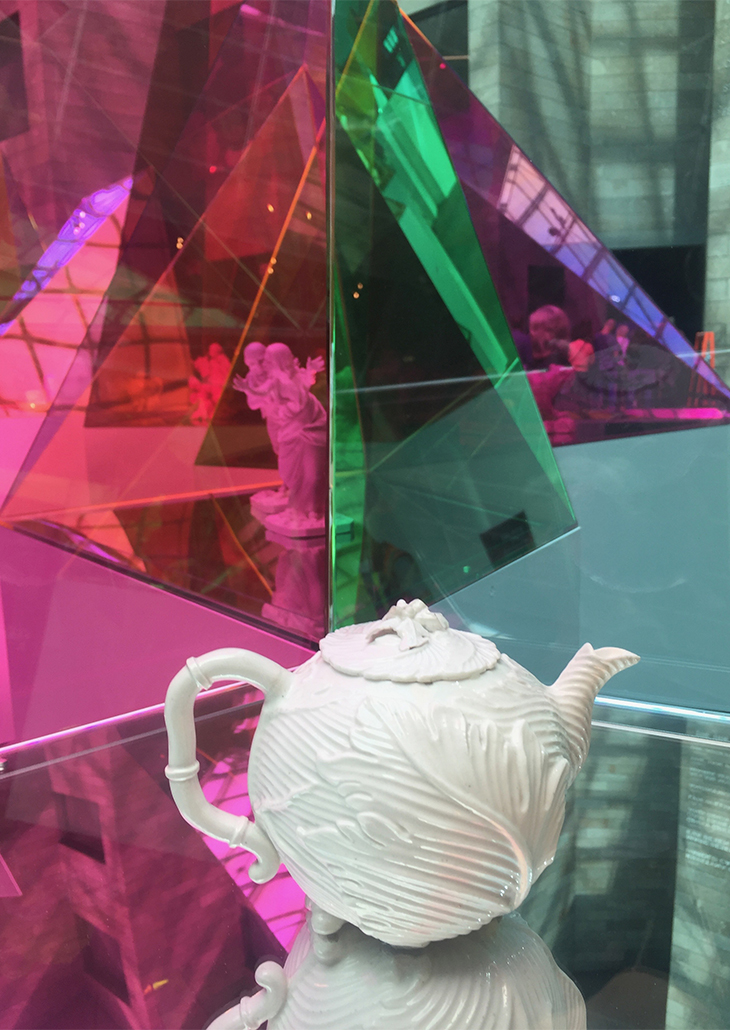 When we are visiting museums today, if it requires just looking at objects in a simply designed case, lately I have observed people just walking by without really engaging with the objects.

Viewers are used to having entertainment on hand; and when they visit a museum, they are expecting it should also be, well fun!

Design now has an opportunity to play a new and very important role, in that of stimulating ‘curiousity’. 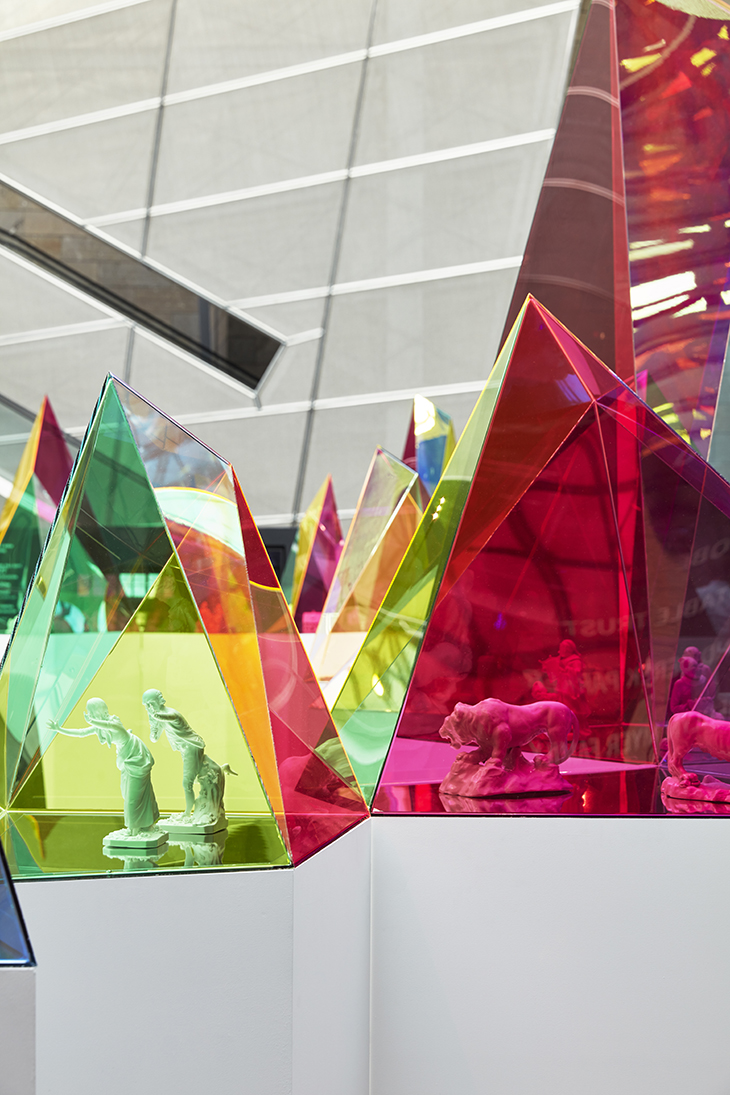 Watching the workers putting the finishing touches in place to SO-IL: Viewing China, my mind was captivated by the fact contemporary architectural company So-Il (Solid Objectives-Idenburg Liu) established in 2008 by Chinese-American architect Jing Liu and Dutchman Florian Idenburg, had turned to mathematically aligned, architectural shapes to draw attention to, or away from, some fifty white porcelain objects on display.

To confirm what the various types of colourful glittering triangular styled cases reminded people of, I chatted to a few viewers.

One woman on her own said the shapes reminded her of the Chinese mountains. Intrigued at how she came to that conclusion … she added… well if you know the title of the exhibition is ‘viewing China’ well what else could it be but Chinese mountains.

What’s inside is not important she observed, it’s only the outer casing deserving our attention, this display is all about ‘design’. 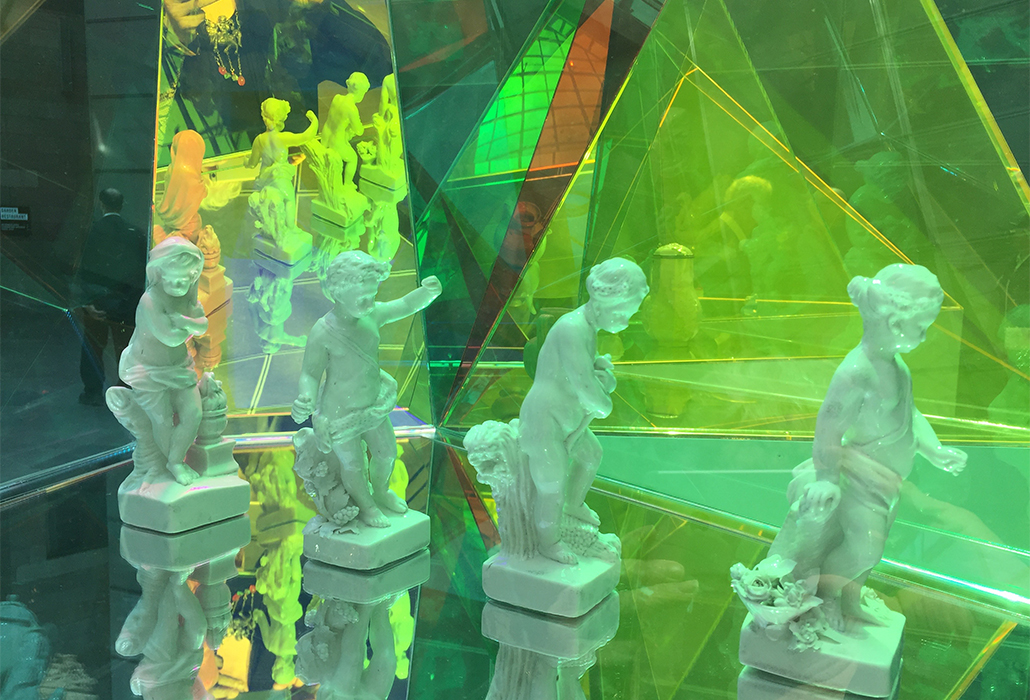 The second couple I asked were concentrating intensely on what lay within the glittering triangle shaped containers. When I asked them the same question, they both didn’t hesitate… oh she said – Paris, while looking at her husband who straightaway agreed. I was momentarily puzzled.

Yes, he commented, the shapes come from a pyramid, like the one made of glass at the entrance to the Louvre. So not those at Giza in Egypt. Interesting. 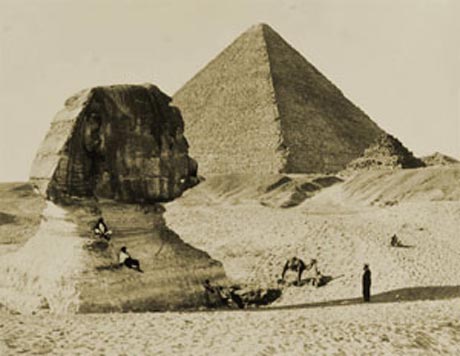 Perhaps the designers were reaching back into the past to a culture, which constantly evolved and was remarkably flexible within a consistent framework, one that lasted for thousands of years. When the smooth shaped pyramid, a quadrilateral masonry mass, stepped and sharply sloping, finally emerged to be used as a tomb or a temple, it became a symbol of power and influence. 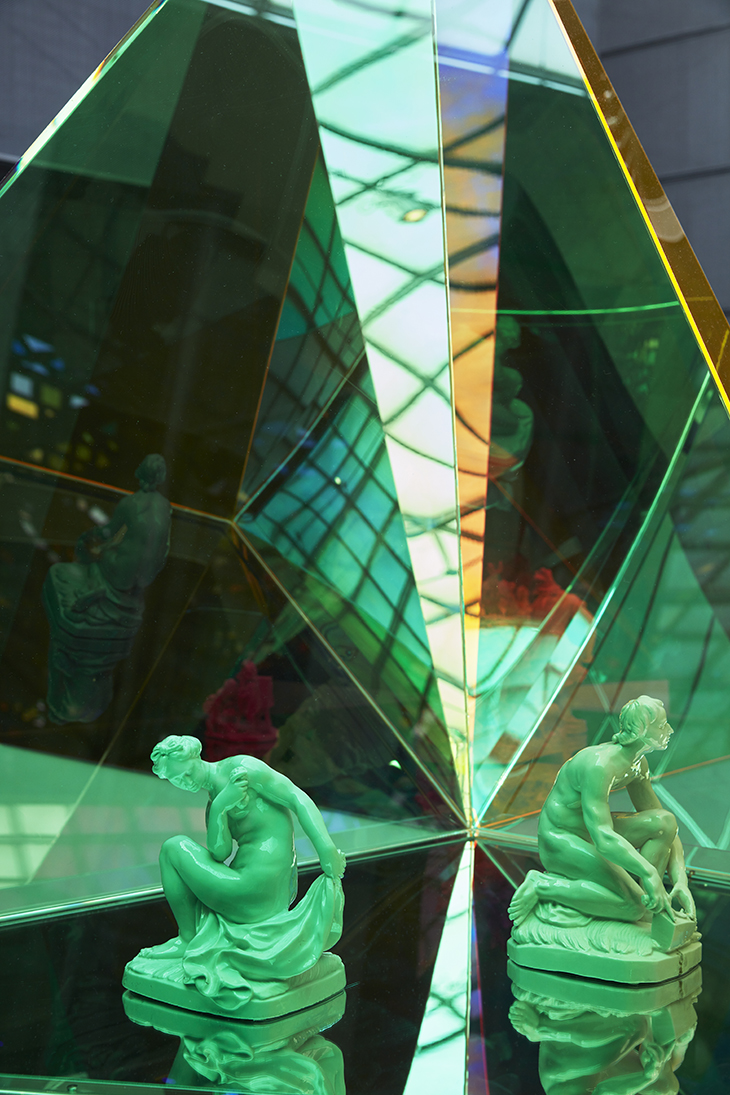 The display at NGV International is described as ‘a large group of geometrically shaped vitrines constructed from brightly coloured dichroic acrylic’. So is it just about mathematics? As the architects tell us, “…through the organisation of colour, form and material, (we) seek to reduce the object-ness of the individual pieces. In their statement they say they also believe their design is about a transition from object to experience, and the power of architecture to act as a mediator in the process.

The white porcelain figurines and other objects on display dating from the 17th century to the present day seem slightly lost, in some cases, within the exuberance of architectural forms…

…is this a statement on how pressed we are for time in the modern world – do we believe we do not have any time to stop and consider ‘ornament’? Or is it something more? 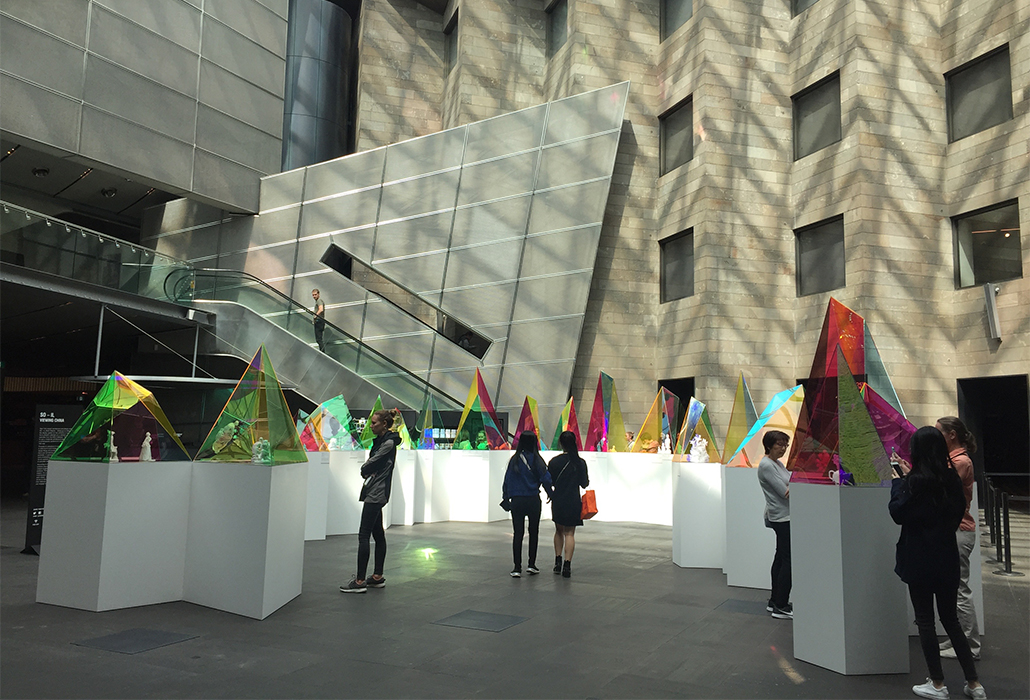 As we are ‘Viewing China’ in more ways than one, its good to ponder China’s reputation for being inscrutable derived from having been, throughout a long history, almost inaccessible behind that great barricade of mountains our first woman saw in her mind’s eye.

According to an old Chinese adage “Knowledge comes from seeing much”, a particularly relevant comment for students of art. The moment of differentiation between products bearing a resemblance to Chinese porcelain and something comparable to the glories of the translucent body so long admired, was not a reality in the west until the eighteenth century. 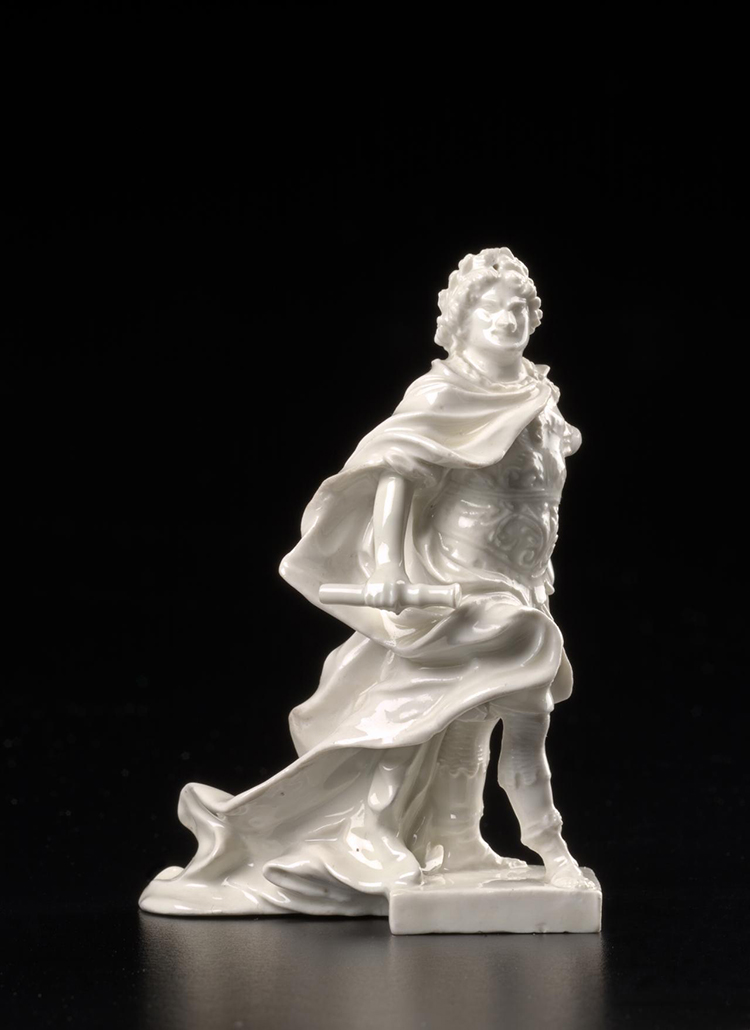 It was good to see a tiny figure of Augustus the Strong, Elector of Saxony in the display at the NGV. For there to be any advances in Europe’s efforts to produce true hard paste porcelain imitating the Chinese, it would require a powerful patron and prince with a passion for porcelain, and he is the man who made it happen.

Watch our Video – Porcelain in the West: Ming to Meissen

Today white ceramics (hard paste porcelain) have become perhaps the most ‘… ubiquitous material in our lives: we eat off it; we drink from it; we incorporate it into our bodies in forms such as dental fillings and prostheses; it is used to fabricate electrical, electronic and machine components’ and easily accessible in shops the world over.

But that was not always the case and, I must say observing the people walking by without a glance, I couldn’t but help think about an intrinsic characteristic of my own personality; curiosity. 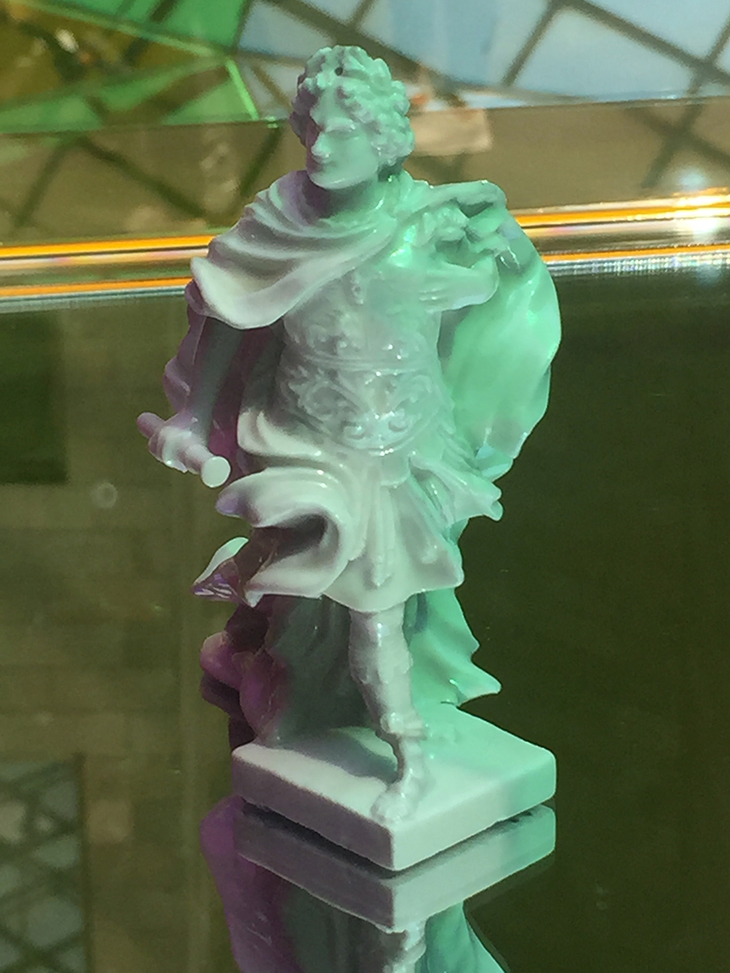 It seems rare for people today to be curious; to reflect on the manufacture of materials from which the practical objects we use in our day-to-day lives were first invented.

So, we need conversations like SO-IL: Viewing China as much as we can if we wish to expand our broad-based knowledge about all sorts of subjects, which can but have enormous benefits, as our experience in life progresses.

Expanding our knowledge helps us to find a balance between old and new, satisfying that deep longing within us all, to keep secure while moving inexorably forward into a brand new-age.

French Architect Jacques Ange- Gabriel [1698 – 1782] reflected his own countries academic ideal of emulation that existed throughout the eighteenth century, by basing much of his architecture on an academic principle of classical proportioning.

Throughout his career he embraced the fundamental belief progress depended upon reason and discipline. Has really so much changed he challenges us to know; do we need to revisit the same conversations often to highlight just how far we have come. 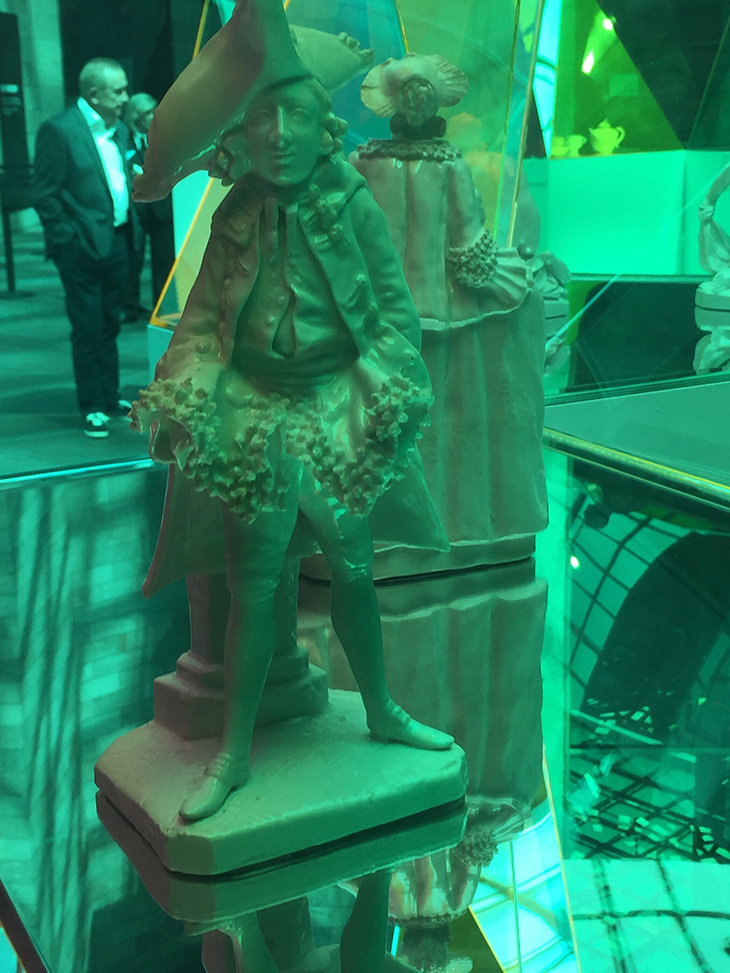 The pyramidal shape, which became popular again c1880-1930’s, was all about symbolic heritage value and combined with a rage for simplicity or, a lack of complexity, made us crave the recent styles of modernism and minimalism.

Did the present generation in Australia embrace the rage for simplicity as a reaction to the stress imposed by our technology driven twenty first century western culture?

Is it a reaction to the comfortable, cosy considered conservative design styles adopted by Australians of their parent’s vintage, mainly English descent post World War II?

The Lost and Baby Boomer generations were, understandably after such a cataclysmic event, seeking comfort from a style associated with their cultural roots, one offering a sense of security and hope, that they would embrace a future.

After all they understood from their old style schooling that virtually everything could be submitted to reason: tradition, customs, history and yes, even art. 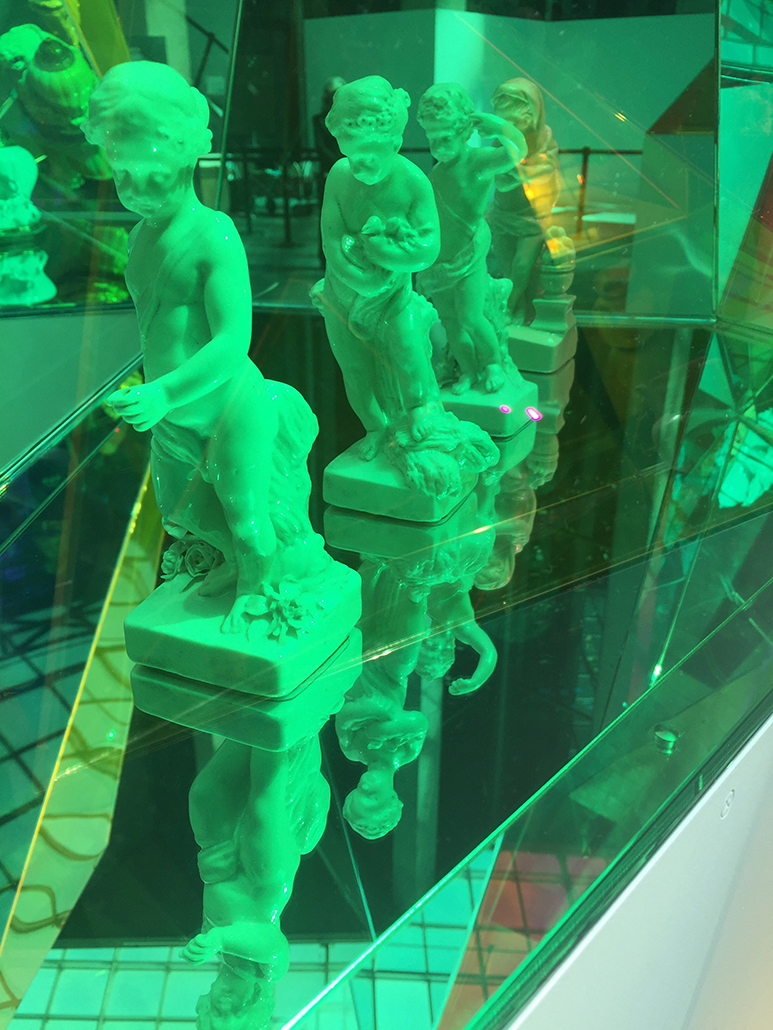 As a now older, although experienced designer, I believe great art whether it is a sculpture, a painting, a piece of fine furniture, a ceramic or wondrously woven textile, will always work in a man-made environment as long as its design has integrity, form and proportion.

It should always be pleasing to the eye with, a subject that challenges the mind, engages the spirit and, most of all, connects with the soul of the viewer.

That can and will happen here if we remember to look past the thrilling architectural design, which has been created to both dazzle and distract, and seek that what lies within.

What you will find is this clever display in reality, is a metaphor for life.

Watch our Video – Porcelain in the West: Chantilly to Chelsea 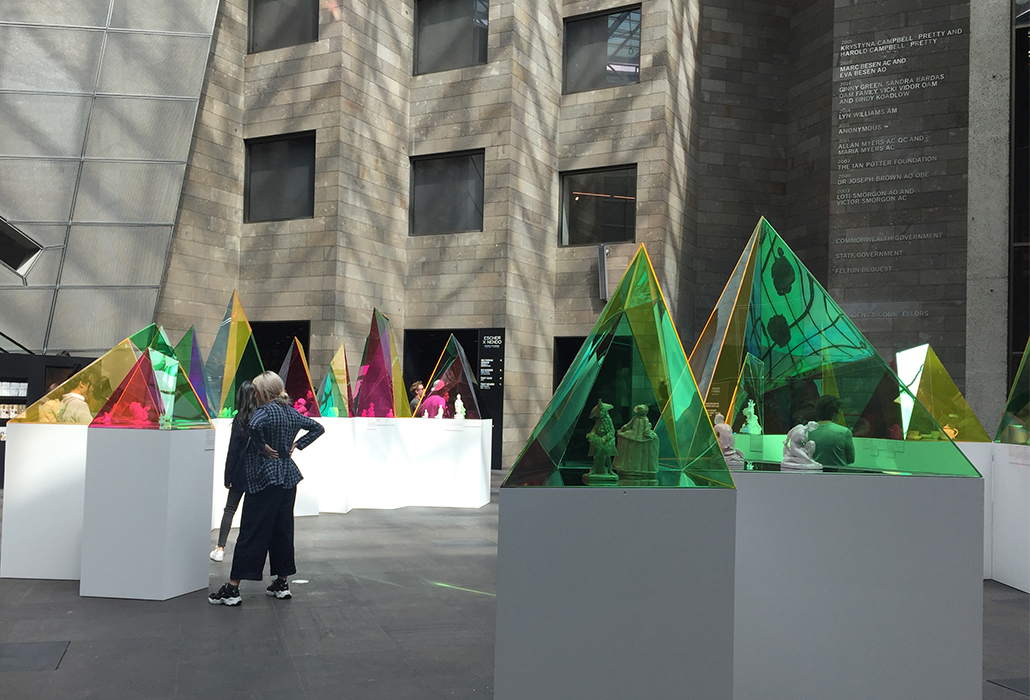 By Matthew Martin and Ewan McEoin

If you want to enjoy a close encounter of the best kind remember that in space no one can hear you scream, but if you remain on earth you can have an enormous lot of fun with Paul, the E.T. with awesome attitude