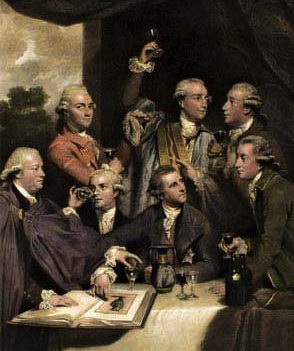 An eighteenth and nineteenth century English gentleman’s broad ranging education, went hand in hand with an improvement in wine processes and a distinct desire to appreciate wine for its own sake and it became a subject for serious study. Connoisseurship became an important concern and men’s clubs devoted to pursuing a passion for art, architecture and the decorative arts sprang up everywhere. This in itself spawned many new trades and expanded employment for those catering to their peace loving luxurious seemingly happy leisure filled lifestyle. After all the art of pleasure is a serious business. Sir Francis Dashwood, 2nd Baronet of West Wycombe Park was one of the centuries most colourful characters who, by all accounts, was seldom sober. He also was 2nd Postmaster General, Master of the Great Wardrobe, Member of Parliament and Chancellor of the Exchequer. In 1734 at London he founded the Society of Dilettanti (dilettante (from the Italian dilettare – to delight) for men who had completed their grand tour of Europe. Over the course of the century the Society would sponsor serious archaeological expeditions, assemble celebrated collections of antiques and art and advance the study of classical art, architecture and music and science. The popular dining club met in Italy, and at home, where they combined ribald revelry, wit, complete irreverence with a serious study of antiquity, which they all associated with the good times spent in Italy, albeit at their parents expense. They had the latest and best wines on hand to toast exalted beauties, the consideration of serious matters in a playful vein (Serio Luda) while they contemplated a lengthy future for the fine arts (Viva laVirtú). Having these interests and concerns gradually became the measure of a man of refined taste and style. Dashwood also revived the Hellfire Club and went ‘clubbing’ with his clique, the so-called ‘Medmenham Monks’ on the banks of the Thames at Medmenham Abbey just 6 km away from his country house. He revived the remains of the Abbey as a picturesque ruin. Over the doorway to the a garden which had been purpose built filled with erotic statues and contained a shrine dedicated to the erect penis, rather than the penitent penis, it said Fais ce que tu voudras – a shortened version of Aime et fais ce que tu veux… by St Augustine – Love and do what you want.