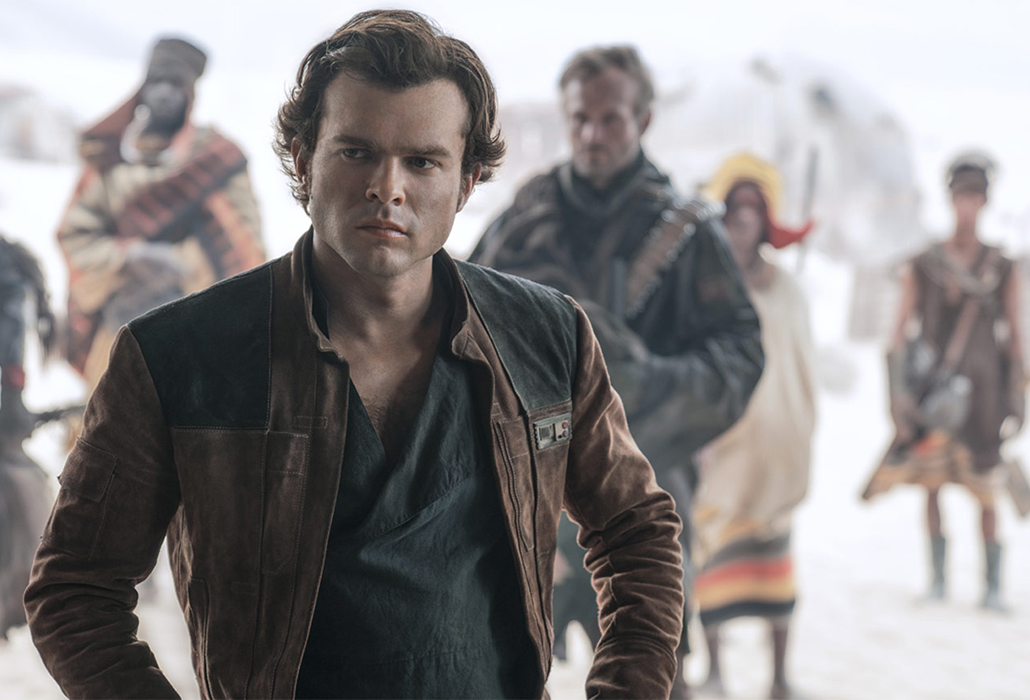 Featuring many people’s favourite self-obsessed ‘scoundrel’ from the original George Lucas imagined Star Wars trilogy (1977 – 1983) Hans Solo as a much younger man, American Actor Alden Ehrenreich had big shoes to fill with the making of SOLO: A Star Wars Story. He does so admirably.

His version of Han Solo is definitely his own man, relaxed, at ease in a tight situation and with a wonderful laconic winning smile. Like his grown-up self, Han Solo the younger is not only full of failings and faults, but also has the confidence only a man convinced of his own abilities as an ace pilot, projects.

He is very much aware of his own ‘good luck’ and observers will find the deeper the writers delve into his back story, his seeming arrogance and conceit, which we all love about him, are but a survivor’s cover or camouflage for a man born with a good heart and soul. 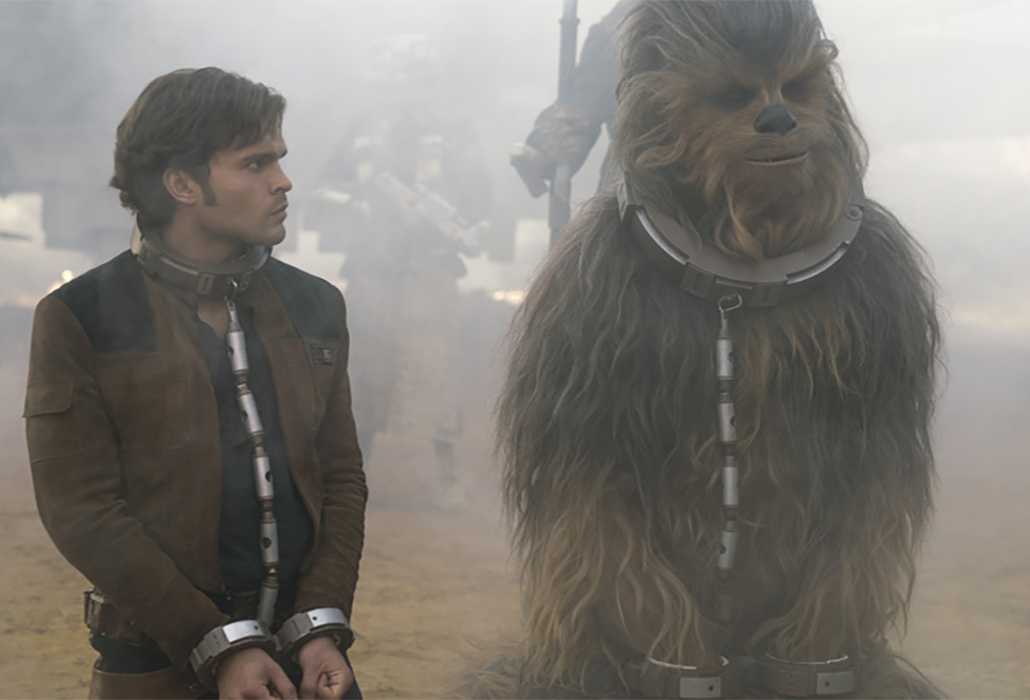 Alden Ehrenreich as Han Solo and Joonas Suotamo as Chewbacca in Solo: A Star Wars Story, courtesy of Lucasfilm Ltd

There’s a lot going on and down in this film and you will need to stay alert and awake to keep on top of all the action and much-loved references. The CGI and visual effects are stunning.

My two companions and I found we were well entertained, loving every second of our sensational thrill a minute ride. SOLO: A Star Wars Story was for us as its final Director Ron Howard promised, imaginative fun and above all, highly entertaining. 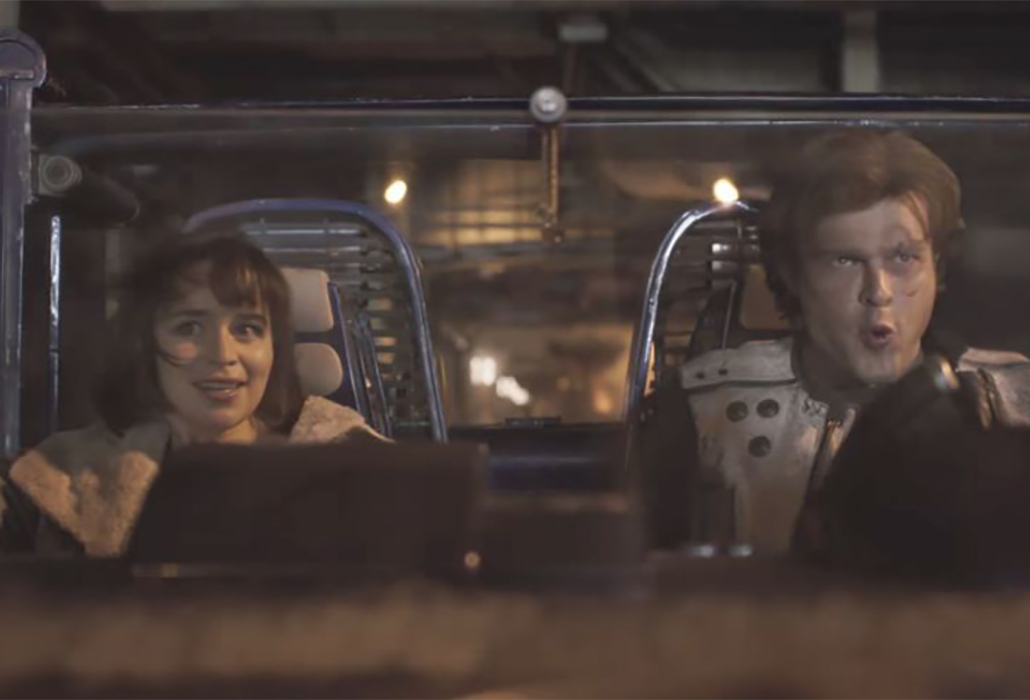 Alden Ehrenreich as Han Solo and Emilia Clarke as Qi’ra in Solo: A Star Wars Story, courtesy of Lucasfilm Ltd

In the world of his youth, trapped as he is in a control zone of the ‘Empire’ on his home planet of Correllia, Han when we meet him first needs to keep his inner self buried deep. Although he is by nature a loner, he and his partner in crime Qi’ra (Emilia Clarke), spend most of their growing up time together dodging death and destruction.

They both want to escape the prison they are in, but have to find the ‘means to buy their way out of a sticky situation by robbing their own rich crime boss Lady Proxima (Linda Hunt – voice) in order to feed the poor, themselves. As they are under her protection in this dark place, there is sure to be consequences.

Finally succeeding in their quest to gain a prize that offers them enough ‘credits’ to exit following a super thrill speeder chase through the hell hole underbelly of the city escaping capture, they reach the border seeking freedom by bribing a security agent with the spoils of their operation. 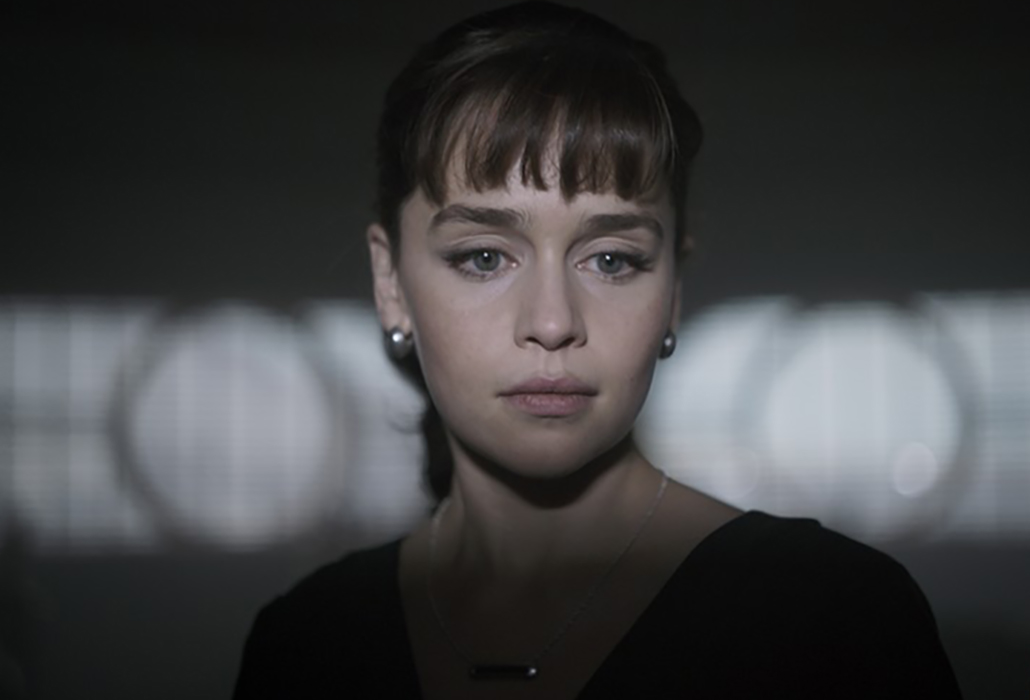 Han manages to exit first while Qi’ra is caught by guards behind him, forcing him as the gate slams down separating them both, to face his immediate future at least, solo. He vows to come back to find her.

The first surprise is to survive and try to advance his desire to be a pilot, for three years following he becomes a foot soldier in the naval department of the Empire in its early days of mayhem and bloodshed. Then his ‘luck’ on a muddy earthly bound battlefield once again forces another change of circumstances, of all places, when as a deserter he’s thrown into a cage with a ‘monster’ to see him off. 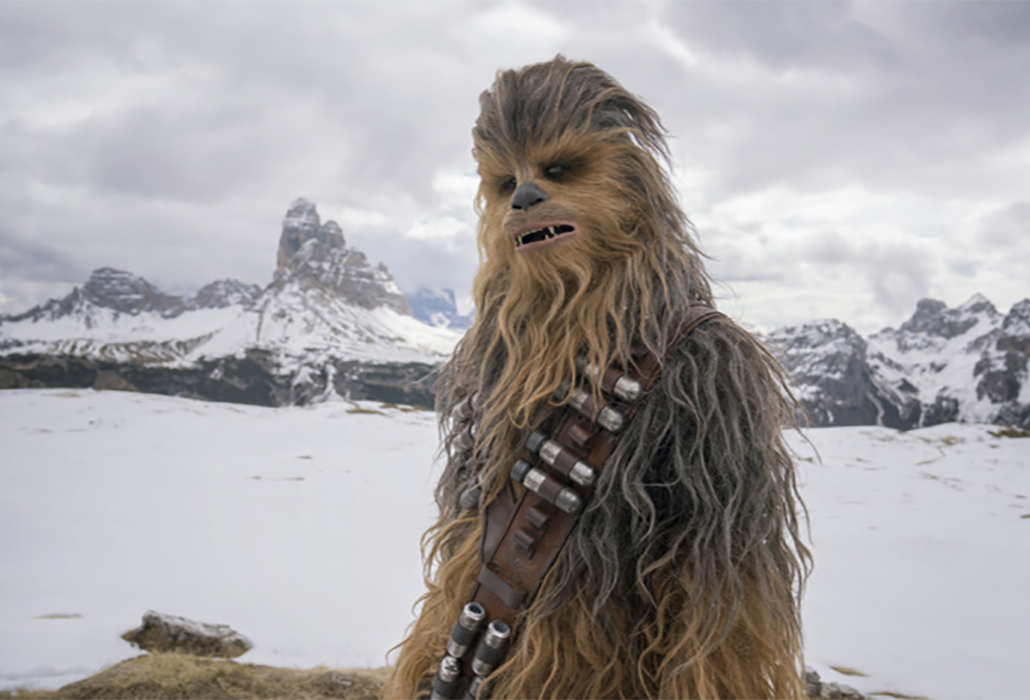 One of the best things and perhaps a redeeming feature of this movie for all the fans of the Star Wars universe is an expansion of that giant walking carpet Chewbacca’s role, while also finding out more about his backstory.

Joonas Suotatoma is a newbie at the job, taking over from Peter Mayhew who has played the character since the original trilogy back in the late 70’s and early 80’s. He gives everyone’s favourite Wookie a zest for life and an insight into his own complex personality.

Chewie is 190 years old when he and Han Solo meet up and as we know from a later trilogy, already has a stack of wisdom and skills to share with his likeable scoundrel counterpart. 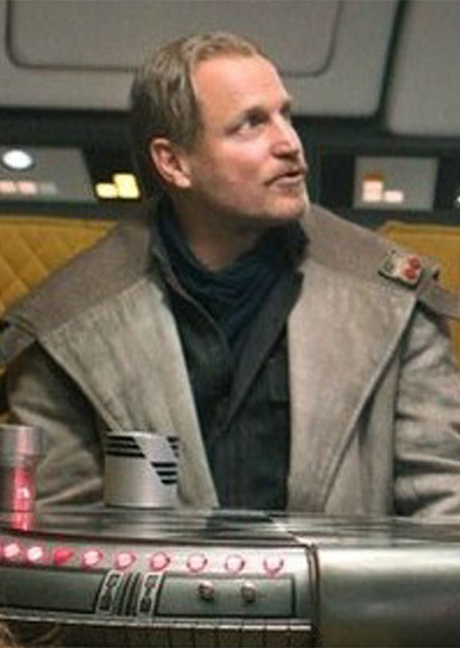 We also discover how and why Chewie and Han form their incredibly close bond one basically unwritten between them. Circumstances mean that in their immediate future together they end up taking part in a big-time heist under the direction of another likeable villain, Beckett (Woody Harrelson).

Han believes if he can join Beckett’s gang of villains he will be able to earn enough money with one job to buy a ship of his own and go back to rescue Qi’ra.

The job and being short handed means they forge a connection, but despite forward planning, imagine Han’s surprise when the job fails and he finds out Beckett works for someone else. He is not his ‘own man’ as Han first thought, after all. 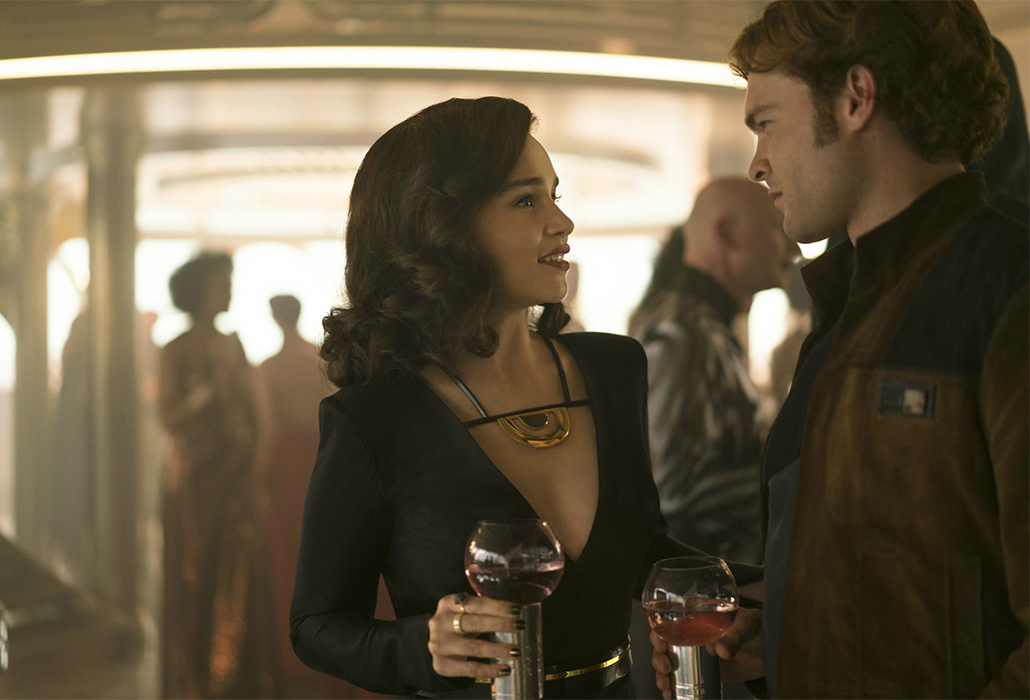 Emilia Clarke as Qi’ra and Alden Ehrenreich as Han Solo in Solo: A Star Wars Story, courtesy of Lucasfilm Ltd

A further shock for Han is when Beckett, he and Chewie go to tell Vos about failing the mission and he finds Qi’ra on board the crime boss’s interestingly vertically challenged ship. As it turns out, she’s in league with Dryden himself, but there’s no time for Han to discover how or why.

Life just doesn’t work out the way you plan it but as Beckett tells Han, people are predictable and you should never trust anyone at all. These are both lessons that will later prove valuable to Han in the gathering of useful information to ensure he and Chewie’s survival. 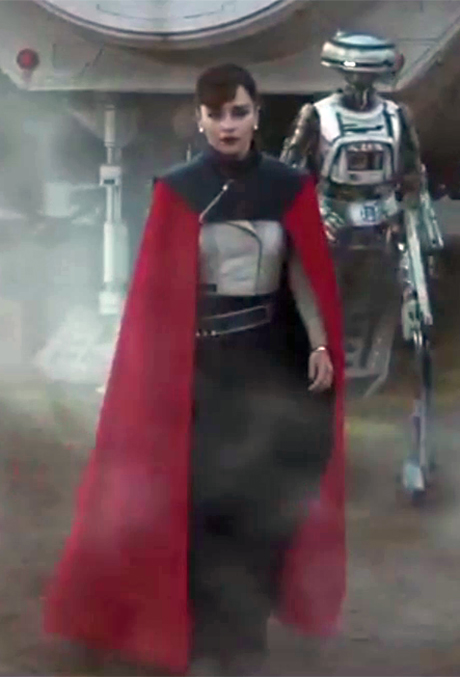 Emilia Clarke as Qi’ra and Phoebe Waller-Bridge (voice) as L3-37 in Solo: A Star Wars Story, courtesy of Lucasfilm Ltd

Not trusting anyone is however a position we discover Han does not admire. He can see that not to trust would be condemning oneself to a very lonely life existence and that’s is really not what he wants at all.

Given another job by Dryden Vos to redeem themselves and to pay off their losses, Qi’ra is sent along with the small band to ensure they succeed on their new mission to the planet Kessel.

To aid their quest and to secure a fast ship and its pilot to take them, she introduces them all to Llando Calrissian. Yet another likeable villain Donald Glover proves himself a new shining star in the Star Wars firmament. 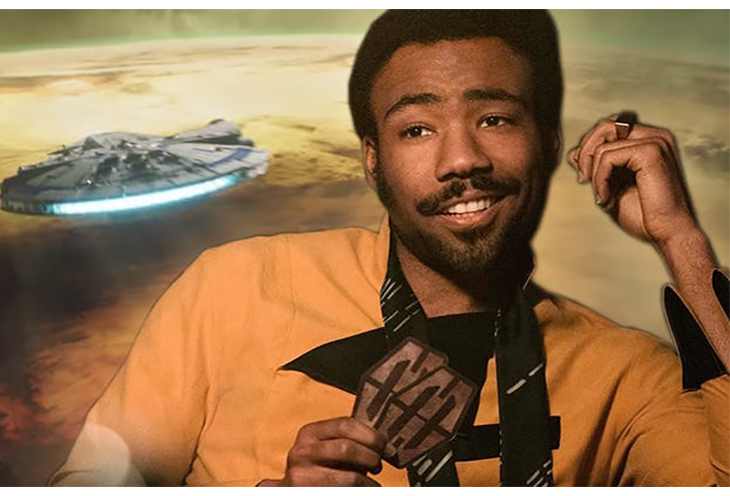 Glover is a perfect younger version of the role Billie Dee Williams made back in the day, by certainly making Llando’s role his own. He gives him great panache.

Having dinner together afterwards to talk over our lasting impressions, my companions and I all agreed two of the best moments in the film is when Han first jumps into the pilot’s seat of the Millennium Falcon, shortly followed by Chewbacca as co-pilot. The looks on both their faces said it all. 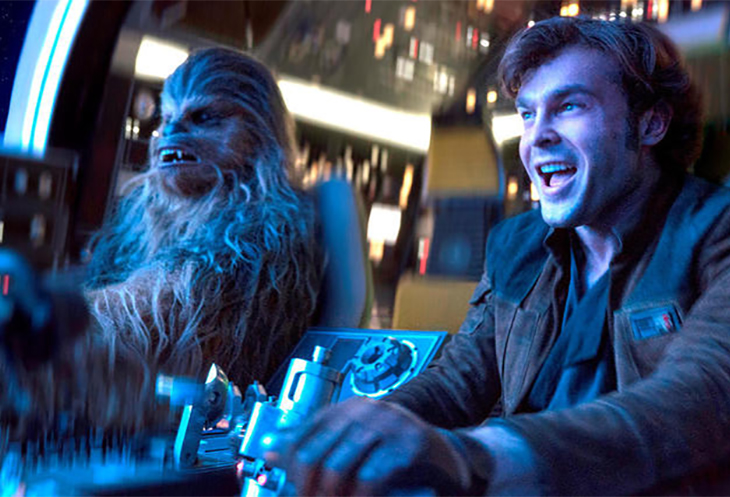 Alden Ehrenreich as Han Solo and Joonas Suotamo as Chewbacca in Solo: A Star Wars Story, courtesy of Lucasfilm Ltd

The bonus is we also went along on the now famous Kessell Run, completing the journey in 12 parsacs. This distance certainly went whizzing by, as Han Solo takes everyone on another wild ride aided by the brain of an L3-37 droid (Phoebe Waller-Bridge) Llando’s crazy woman droid co-pilot.

Her untimely demise on the job, ensures she becomes part of the ship forever, Llando downloading all her stored mega-data about the galaxy into its computers to help them escape capture.

The sharing and winning of the ultimate prize by Han Solo, the Millennium Falcon from Llando, the fastest ship (or pile of junk) in the galaxy rounded off a night of earthly delight. 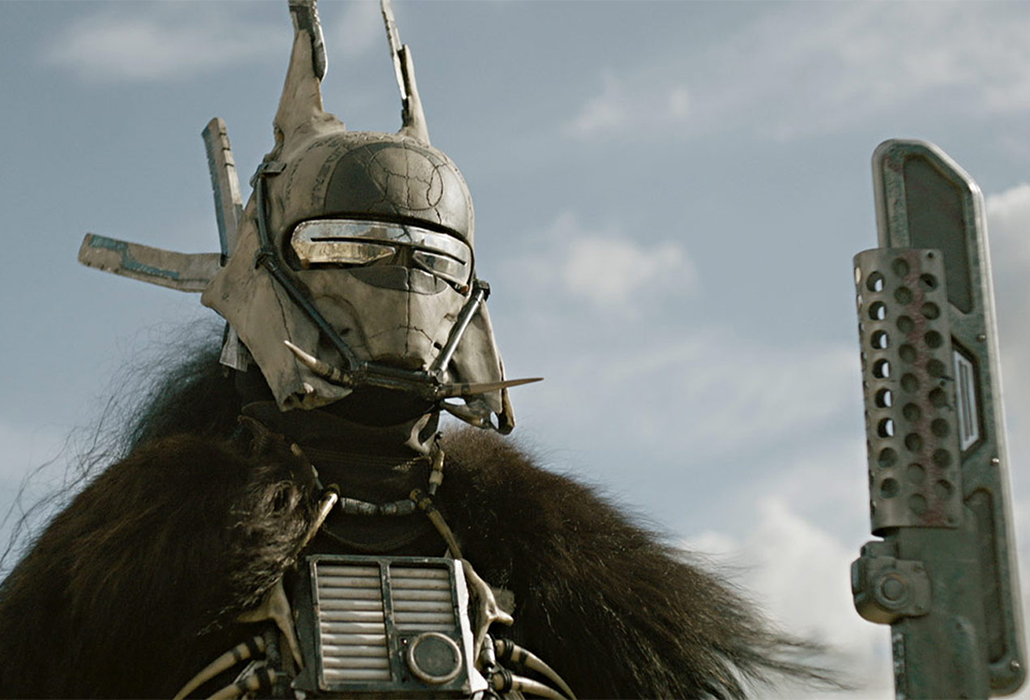 Before that though, we met another host of pirate characters headed up by Enfys Nest (Erin Kellyman) who together with her followers, marauds among the clouds stealing from Crimson Dawn pirates for the greater good.

She’s impressive, a strong feisty red head and true hero in the ancient tradition of Robin of Loxley, which certainly endears her to us and our hero.

Yes, this previously thought ‘villain’ who foiled Beckett and Han’s first failed robbery attempt, turns out to be a young confident woman, who is all set when we leave her, to impose change upon the early canon of Star Wars mythology.

After gaining Han Solo’s help and a good outcome, Enfys declares she is leaving to help kick start a Rebel Alliance and invites him to join her followers. However he rejects the offer, not knowing he will get another chance in the not too distance future. 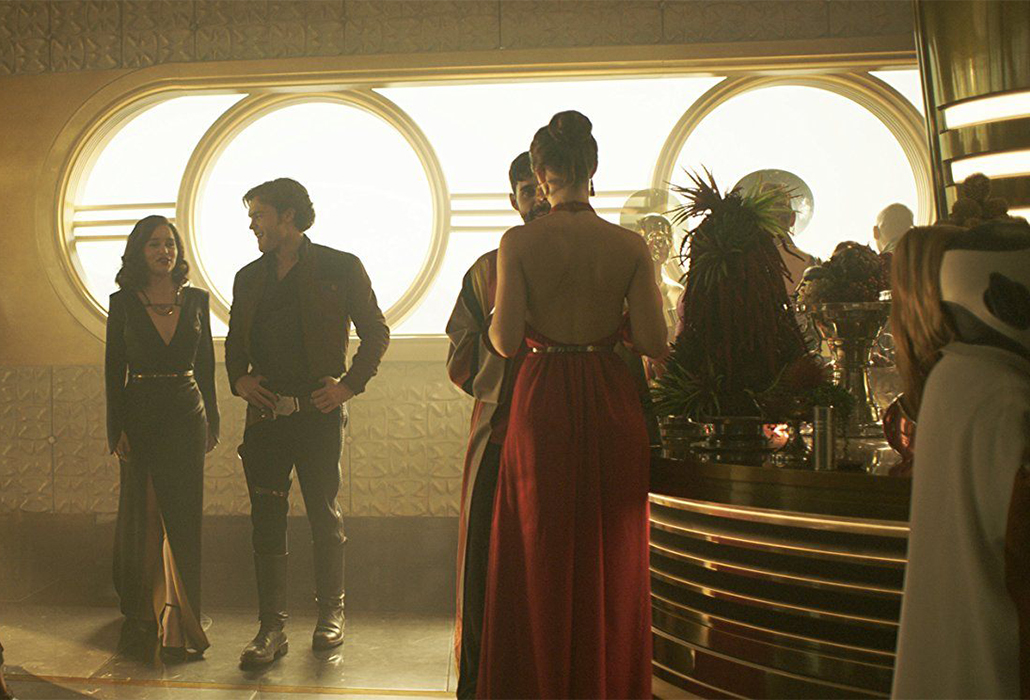 Alden Ehrenreich as Han Solo with Emilia Clarke as Qi’ra in Solo: A Star Wars Story, courtesy of Lucasfilm Ltd

We’ve given out enough spoilers so we won’t talk about the ending, only perhaps say, our viewing party were happy with the outcomes of this film.

The music aided our enjoyment of all the action scenes – and there are just so many to keep you constantly diverted. The original Star Wars music by renowned composer John Williams has fabulous additions by his successor John Powell, giving a star-spangled music boost to the franchise, while exhibiting a contemporary touch.

Episode IV Star Wars: A New Hope starring Mark Hamill, Harrison Ford and Carrie Fisher and the sequels down the years have been inspiring their generation to innovate and look up to the future of our world. . If you haven’t seen any of them, this is a good introduction to one of the main characters with the story and you can go on and watch Rogue One and the original trilogy, and proceed along from there.

Thinking and talking about SOLO: A Star Wars Story afterward led to a conversation about how much we all admired Lawrence Kasdan and his son Jonathon who so vividly imagined this new and exciting chapter of the story, contributing handsomely to the ever-expanding Star Wars Universe. Look up to the future; can’t wait for Episode IX next year.

The Kitchen Sink at the Ensemble Theatre a comedy with amusing incidents humorous conversations and ludicrous plumbing errors is hilariously touching, says Rose