Christopher Columbus sailed from Spain to discover a route to the new world, the Americas, finding it in 1492.

American musical theatre composer and lyricist Jason Robert Brown places four singers on the deck of a sailing ship and has them beckon the audience on his musical journey to our new world.

Beautiful vocals and impeccable theatrical and musical direction, where every single shred of humanity is eked out of the staging and the performances, gives the production immense integrity and the audience boundless entertainment.

The cast of singers on stage presenting  Songs For A New World now showing at the Hayes Theatre in Sydney, catches the audience in a fishing net of melody and harmony. We are drawn to the succulent bait of story-telling and the magnetic pull of songs from the first dulcet tone to the last note of the music. Each of the four singers plays different roles in their allocated songs and although the songs do not directly relate to one another there is a continuity that is innovatively fashioned and astutely successful.

The songs abound in diverse locations in time and place. They pertain empathetically to the human condition which the audience immediately grasped as the songs are stories of everyday people.

The challenges faced, the decisions made, the power of change, love and its many forms, the courage of facing the unknown and the daunting nature of being human are circumstances we all face. This is real life and it has been intimately embraced by the entire company to produce a resonating and jubilant success. Jason Robert Brown arrived in New York when he was only twenty years old. He was determined to make his mark on the music industry. He worked in a piano bar and as fate would have it he met Daisy Prince (daughter of legendary Broadway director/producer Hal Prince) and bravely and intuitively asked her to direct the theatre and cabaret songs he had written.

Three years of collaboration followed, working and reworking songs and trying to come up with an opening number. Finally the very lucid and gripping opening number, The New World was written and the connection was clearly defined.

“It’s about one moment. It’s about hitting the wall and having to make a choice, or take a stand, or turn around and go back. I hadn’t realized that that was what it was about, but I sat down at the piano in the rehearsal room at 1:30 in the morning, and suddenly I knew” writes Jason Robert Brown. It opened Off-Broadway at the WPA Theatre in 1995 and the spotlight was on this extremely talented musical writer of his generation.

This very theatrical song cycle continues to be popular across the world and Blue Saint Productions (Producers Joshua Robson and Damien Bermingham) made a shrewd decision to stage the atypical musical at the Hayes Theatre, Potts Point Sydney. 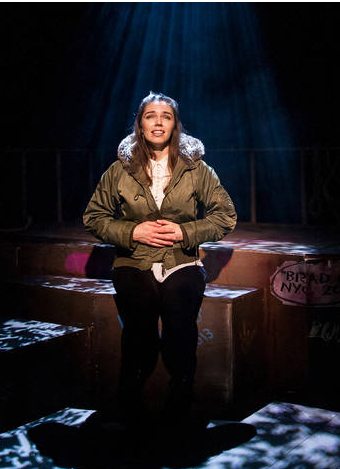 As the light dimmed the anticipated journey of discovery was explored in the sounds of the ocean as waves break and seagull’s lonely cries and hungry squawks filter the air.

The human voice is perhaps the most expressive of all instruments and the four singers individually and in company enthusiastically and confidently commit to a challenging array of songs that span many genres including pop, gospel and jazz to form an exciting and exhilarating program.

The persuasive opening song The New World is a prologue to the following song sequences.

Most of the songs carry very intense narratives that are eloquently explored both theatrically and vocally by the four singers.

The vocal purity of the opening number was echoed in the fine casting of Teagan Wouters as Woman 1. Her physical presence reflected a natural beauty that complemented not only this performance but also her other songs and the characters she depicted.

She was joined by the three other members of the company as they sang the song that plotted the musical material to come. This song was composed last and the composer’s time for reflection on his other compositions allowed for the central theme to effortlessly emerge.

“A new world calls across the ocean …

Christopher Scalzo as Man 1 found in his assigned songs channels for the penetrating timbre of his voice and the emotive nuances of his tone.

His movements across the boat were fluid and embellished the characters he portrayed. The flair for comical gestures and raucous interpretation was flaunted by Sophie Carter as Woman 2 in Surabaya-Santa and the audience’s laughter spontaneously erupted.

However in Stars and the Moon she renders a different style adjusting her tone, volume and expression to suit the more philosophical nature of reflecting on past decisions where love was rejected and material wealth was the winner.

In She Cries Man 2 Cameron MacDonald sings of the power and hold the woman he loves has over him. He shapes each line of the song with a compelling phrasing that lingers with intensity. There was a passionate support for each other in the ensemble and this added to the depth and musicality of the performance. I felt sure this had been nurtured by both the astute and sensitive Director (Luke Joslin) and the Musical Director (Lucy Bermingham).

The emotional pull of the music vibrates with life through the melodic piano playing of Lucy Bermingham, Winston Weng on bass and the rhythmic pulse of Tom Doublier on drums. The fine sound these musicians play is absorbed by the cast and transmitted in song to the audience.

Everyone was committed to the unique character of this contemporary song cycle and this ensured the exquisite production connected with the full house that was wildly enthusiastic and wanted more.

Songs for a New World

Tell people you are off to Bali and it insights two reactions. The first being “bogans, braids and bombings”. The second, “sophisticated shopping, fabulous food and friendly folk”. I fall into the second category. I must admit, before my first trip to this tropical paradise, my thoughts were firmly in…