Ceramics shaped from earthen materials and fired in a kiln become both water-proof and durable to a certain extent. “Characterized by clarity of form, understated decoration and subtle yet luminous colour glazes, ceramics have long been appreciated as one of the most significant artistic contributions of the Korean peninsula”, said Dr. Khanh Trinh curator of Soul of Simplicity: Seven centuries of Korean ceramics an exhibition at the Art Gallery of NSW on now until April 2014.

All civilizations, which evolved beyond the pure hunter gatherer stage, made some kind of pots whether for cooking or storage. However humans soon become unsatisfied with undecorated wares, whether they were coil or slab built. The basic materials for ceramics are mineral-rich clay, containing kaolinite (Al 2[Si 2O5][OH] 4), silica and feldspar, elements that occur naturally in soil and sedimentary rock and can be used for modelling. 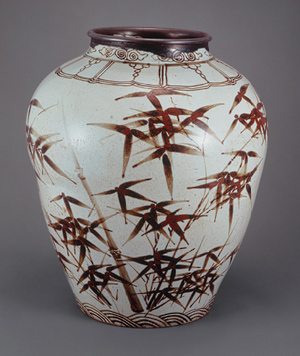 The crystal structure of these minerals allows them to adapt easily and readily to change. The shaping, molding and modelling of the clay means it is possible to create every thinkable shape that will not decay during the firing process. Feldspars are alumino silicates containing sodium (Na), potassium (K) or calcium (Ca), fluxing agents, that reduce the melting temperatures of the silicates that harden the object, and after blending all the raw materials according to special recipes, the vessel is formed.

The wares we refer to as porcelain came quite some time after earthenwares and the more sophisticated stonewares, which were initially produced by many civilizations. Methods of working with clay, pinching, modeling, rolling, coiling and throwing it on a wheel are how humans first worked with clay. The potter’s wheel was invented around 4000 BC in the Middle East and allowed for the creation of symmetrical round forms. Glazing, a process of adding a coating to the object came next, making it useful for holding liquids.

It is important to emphasize that ceramics, like so many other disciplines in the arts, cannot be viewed in isolation but in their relationship to other arts and the society of each age. Pottery eventually broke through the chrysalis due in no small part to influences and knowledge gleaned from the ceramics of the Near and Far East. From one country to another from one ware to another and from one medium to another cross-cultural fertilizations are many in the history of ceramics in our world, be they oriental or occidental their seeds have indeed been spilled far and wide.

The Chinese for many centuries were experts in the art of porcelain production and they traded heavily with other Asian islands and other countries where techniques were copied and new methods of manufacture employed and the trade spread rapidly.

Venetian traveller Marco Polo revealed that he had witnessed porcelain manufacture in the city of Taicheu in the Province of Fujian in China, where he also made enquiries about the materials used for fashioning and decorating the wares.

The 38 objects in this show have been drawn from the outstanding collection of Korean ceramics of the Museum of Oriental Ceramics, Osaka (MOCO), which plays a pivotal role today for researchers of the history of ceramics.

The museum was founded in 1982 by the city of Osaka, Japan, which is historically a commercial centre. It was built to house the extensive Ataka collection of Korean and Chinese ceramics and since then has expanded both its collecting and research activities so that it has become arguably one of the most recognized centres for the display and study of oriental ceramics worldwide. The dynastic periods in which Korean ceramics reach their peak are the Goryeo (818-1392) period and the Joseon (1392-1897) period. They particularly admired Chinese celadon. There are many romantic attributions for the origins of the term celadon, which became a generic term for ceramics finished with a glaze ranging in colour from olive-green to sea-green derived from iron.

Before glazing the ceramic body was treated with a ferruginous, or rust coloured slip and fired in a reducing atmosphere which put simply deprives the kiln of oxygen and the loss results in a change in the colour of the glazes and this meant skilled potters could manipulate the kiln to achieve the colour they wanted to achieve.

The Persians eagerly sought celadon wares during the Song Dynasty 960-1279 because they believed they would break, or change colour if poisoned food was placed on them. The word celadon literally means the colour of natural things. Some historians take it as being a deformation of the name Saladin, the sultan of Egypt, who in 1171 sent forty pots of this colour to the Sultan of Damascus. 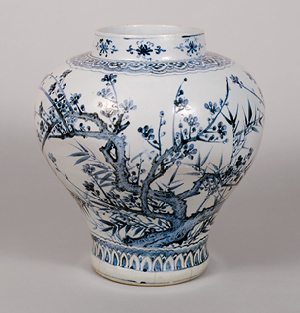 Jar, Joseon dynasty (1392–1910), second half of 15th century Korea Porcelain with underglaze cobalt-blue decoration of plum and bamboo. Gift of the Sumitomo Group courtesy The Museum of Oriental Ceramics, Osaka

In Korea celadon porcelains were renowned for having the ‘radiance of jade and clarity of water’. During the Goryeo period a new technique for surface decoration emerged, so that the designs after being carved or incised onto a dry clay body were filled with black/and or white slip and a translucent glaze applied before firing.

Corresponding with the period in Europe where early experimentation on making porcelain began, the stoneware and white porcelain being produced in Korea was undergoing transformation as techniques of inlay and underglaze painting in iron pigment became refined.

In Korea, porcelain is known as baekja, or white ware and it took centre stage in the Joseon dynasty, with perhaps white ware painted with blue cobalt the most highly prized wares of all.

This trend followed the early blue and white wares of the Ming Dynasty (1368-1644) in China.

Iron Brown and the even rarer copper-red decoration on white wares also became admired during the seventeenth century, and became highly sophisticated in both form and style. 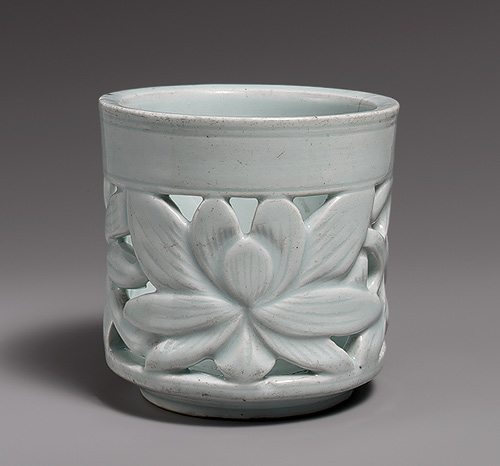 At the beginning of the 17th century the trade between the Far East and Europe was being developed further by European trading companies who were shipping vast quantities of oriental commodities to the West.

Elegant forms were used by the royal court and with the social elite, who preferred plain white dishes, bowls, bottles and jars that reflected ‘the purist and minimalist aesthetics associated with neo-Confucianism, which became the state ideology of the Joseon dynasty’.

Porcelain brush holders with openwork designs were produced by bunwon, the Joseon court kilns, and were especially popular in the nineteenth century.

Along with porcelain water droppers, lacquer stationery boxes, paper, ink stones, and brushes, porcelain brush holders formed an essential part of a Confucian scholar’s writing accoutrements. They were not only used for practical purposes but also to display the owner’s discriminating taste.

Being the spare heir George VI and his family, contented country folk were thrust into the limelight of city and royal life, where they would find their destiny