The European medieval mind concerned itself with matters of the soul, harmony and music as major aspects of the kósmos, which was conceived as a tightly structured, hierarchical system centred on the earth and the human race. At every level there was a moral lesson for humanity, and a satisfying metaphor for the nature of God who was ultimately the one in control.

While being associated with entertainment and frivolity, music is also a powerful form of communication vital to our health and inner well-being. At what point meaningful, communicative sounds began cannot be established. What we do know is that we all make sounds first before we learn to talk. So we could say that music is the first language that we learn and an important step in the creation of the spoken word.

The oldest musical notation known, so far, comes from ancient Babylonia. It was written for a stringed instrument between 2000 – 1700 BCE.

The earliest known record of music and a list of twenty three types of musical instruments are recorded on a clay tablet from Sumer.

The Hymn to Creation dates from before 800 BCE and also comes to us from the Sumerian tradition.

This is where the Psalms, or poetic songs that praised God emerged, to be performed by that original of all the musical instruments we have, the voice.

We do know during the first century that the psalms and Song of Solomon, were chanted daily on the steps of the Holy Temple at Jerusalem. That is until the Romans destroyed it, during the Siege of Jerusalem in the year 70.

Scholars today have confirmed that this fine collection of poems emerged at different dates written by different authors, who included the Biblical King David.

The performance of first century Roman music was built on the Greek tradition and from the records we have we know that was primarily instrumental or military in nature.

As there was no fully developed way of notating music at that time we are left to speculate on what it may sounded like.

Keeping nightly prayer vigils in the time when the church and state were still poles apart was considered wise.

The first century Roman commentator Pliny the Younger wrote ‘on certain days they get together before sunrise and sing songs to Christ as if he were God’.

Roman philosopher, dramatist, and statesman Seneca (4BCE-64ACE.) also wrote of being disturbed late one night by loud sounds coming from a group of singers who practicing vocal exercises.

Those of us who live in the city today can well relate to Seneca’s comment.

From documentary evidence we also know that early church worship centered on chanting the Psalms.

Many of the truths illustrated in these musical poems were meant to enable us to plumb the depths of the human heart and soul, as well as soar to great heights in order to apprehend the divine.

As the Christian church evolved alternate verses were chanted daily as part of morning and evening ritual services by monks sitting on opposite sides of the newly established church.

They stood facing each other, in what is now known as singing in choir.

The position for the choir (quire) of voices within the church moved around a great deal in the early years.

Then as daily church rituals became firmly established and worship gained an essential rhythm architecturally the choir became located in the east as part of the sanctuary, the holiest part of any house of worship.

At first the quire was furnished with long wooden benches (pews) that then gained cushions. Eventually choir stalls were designed to allow the protagonists to sit, kneel or stand while singing.

As time went on these became elaborately embellished with carving responding to the choir being now part of a sacred space and worthy of a display of the finest craftsmanship that man could provide.

Cathedral and church choirs historically, and contemporarily, are usually made up of a group of people with outstanding voices individually, but more than often lack the courage to compete as a soloist in the performance idiom.

By singing in community they not only gain courage but also inspiration and momentum to give outstanding performances collectively.

Christian church fathers recognized the importance of emerging music traditions in relation to reflecting and inspiring worship and it became an important aspect in the development of the liturgy, the form and arrangement of public worship.

It became a major priority as monastic communities exerted a penetrating and powerful influence on the spiritual, economic and musical growth of church life. 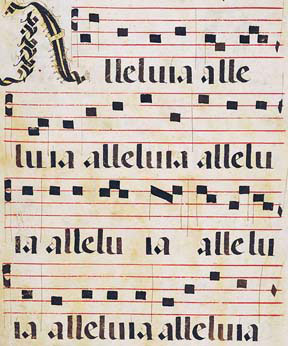 In the early church the rite of the Lord’s Supper was held in the evening and often linked with an agape meal or ‘love feast’ that was then interspersed with prayers and songs rendered by the choir.

This marked the beginnings of what is known as Christian hymnody, the composing or singing of a group of hymns.

The alleluia was an exclamation in general use meant to express thanks, to praise God or herald relief, welcome and gratitude.

8ACE historian and Doctor of the Church The Venerable Bede (672/3 -735 ACE) earned the title “Father of English History“.

He related the story of a battle known as the ‘Alleluia Victory’ when Mariners reputedly shouted it from ship to ship following their success.

Creating songs of praise, devotion and thanksgiving, reflected the beauty of the cosmos. When accompanied by dance movements and hand clapping from the fourth century rhythmical hymnody took the lead.

St. Ambrose, a much admired and loved illustrious father of the early church had descended from an ancient Roman family. 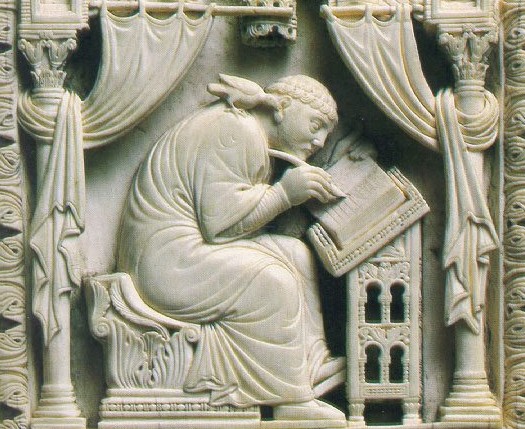 He represented his ideas about Christianity by shaping them into melodies that had an ability to excite the listener.

Although his actual personal input remains unknown, the vitality and artistry of his works, intended for the greater good, were enjoyed for centuries.

Today they still form the basis for many hymns that we recognize, want to join in and sing to.

By the time of Pope Gregory 1 (c540-614) in the sixth and seventh centuries there was a distinct appreciation of fine singing and a genuine regard for a beautiful voice.

Pope Gregory took it upon himself to re-organize the liturgy and its music. He influenced the establishment of a schola cantorum, a choir passionately committed to executing psalmody.

This was all about the singing of psalms as an aspect of divine worship, ‘as if it were one voice’ and Rome became the indisputable centre for the development of church music. Children in orphanages supplying sublime singers in the papal choir where they were that they should not sing faster or louder than anyone else.

It was during the seventh century that Isidore of Seville, a notable musical theorist and scholar remarked about how hard it was to notate music.

However as the recognition that the various sounds the human voice was able to make could be recorded, so did the idea of arranging those notes to make different tunes evolve.

Plain or simple at first by the ninth century a form of simple notation recorded plainchant as performed by monks and as the study of sound and musicality advanced over the centuries so would compositions become more complex.

By the eleventh century a long high note or descant was being set against others signing another range of notes above the original plainchant melody.

Those sustaining the prolonged notes were called ‘holders’ or tenors, while those who sang the descant were called contra tenors.

Contra tenors were eventually called ‘Altus’ and later, those who sang a part intertwining with the altos were named predictably contra altos. Eventually both their parts would be surrounded by two other voices appropriately named sopranus, which meant ‘above’ and bassus, which meant below. This style of music was called polyphony, meaning a multiplicity of sounds.

Opus anglicanum, or English work is fine needlework carried out for ecclesiastical or secular use on clothing c1100 – c1350 & reflects ‘the beauty of holiness’