Sarah Robson is an internationally recognised artist and has an exceptional current exhibition Spatial Interventions at Manly Art Gallery and Museum.

The Gallery is splendidly positioned on Sydney Harbour just a four minute walk from Many Wharf.

This exhibition documents and celebrates Sarah’s creative expertise in painting, sculpture and installation.

The artworks are significant examples from a career spanning twenty years.

They investigate, penetrating deeply into the intersection of the material and the abstract.

I was introduced to Sarah’s work in the nineties and it made an immediate and lasting connection with me. The impact originated particularly from my response to Yellow Painting 1V 1992.

This painting was dominated by two vertical white columns. Black lines created rhythm and tied the painting together.

These lines, architectural in structure were the underpinnings of the painting giving it strength and power.

The way the yellows of the background were brushed on the canvas breathed life into the painting.

Touches of red orange lines were the result of changing light falling on the painting and these lines cast shadows that blurred the plane.

Sarah’s abstract response was intensely linked to her perception of reality.

From the same series of work came Wood Relief [yellow] 1992 an oil on ply.

This nine panelled artwork explored the relationship between negative and positive forces. Black painted shapes like desert outlines of anthills or cacti were musical in their composition.

The central yellow panel created unity and the patterns of black shapes and lines were silhouettes of the intersecting tangents of life and death.

Examples from this period of her work were exhibited, including Untitled [Red Woodblock] 1992/3. This was another nine panelled artwork with a central red uniting panel.

I was fortunate to hear part of her Artist’s Talk where she explored key ideas and issues that have permeated her practice over the past two decades. Sarah expressed a desire to accentuate the immaterial world and explore the concept of the meeting point of the physical and abstract in her works. She was very mindful of this tie and thread that ran through her work both as a sculptor and painter.

She recognised and saw value in each stage of her work celebrating its meaning and execution. Her continued comments focused on her Works on Paper the printing process that had begun in 2008 and evolved since then.

All that can be in a sculpture Sarah believed could be in paper and she loved moving back to paper.

Through her Works on Paper she had found a meeting point for the painter and the sculptor within. In the geometrical nature of these works she was influenced by mathematics as a tool for her succinct expression and it also provided a language to speak about her work. An example used by her was the shape of circles as organic and honeycomb in nature was influential.

She then spoke about beauty and perfection citing that beauty was complex in that it contained so much but was simple as well. The birth of her baby led her to an understanding and wisdom about imperfection and this impacted on her work giving it a human touch.

One of the pieces in this section of the exhibition was a Sticker work and she explained that this artwork required risk taking and involved trust. Sarah found she was continually refining her work.

It had originated from a commission for a three dimensional piece that did not come to fruition. She used ideas and drawings from this commission and in the process discovered she could create a corner ceiling piece that explored the dominant theme of space so evident in all her work.

How much do you take away to ensure the magnetic tension is the perfect point to contain the balance of elements of relationships? This was a very exacting dilemma requiring constant reworkings.

Sarah was very committed to the importance of viewers of her artworks. She believed ideas to be the currency she wanted people to experience and share and found viewers to be a constant source of pleasure.

She invited viewers to enter the space within her abstract works and also discover the essence of her sympathetic colour restraints. I shared her thoughts about the importance of play. With the element of play unexpected things can happen and learning definitely occurs when the artist is engaged in play. However she elaborated there needs to be a structure to play otherwise anarchy can occur.

She used the term “structured improvisations”.

The element of play was masterfully wrought in her Corner Composition 2010 [white] where white sticks appear randomly dropped in all directions but a skilful structure is subtly adhered to and unity ensues.

I found it fascinating and a defining moment to hear she had worked actively to take the narrative out of her work. After her talk I spent time with her distinctive and elegant sculptures that reflected a minimalist aesthetic, an astute conceptualisation of shape, space and form and a unique relationship with materials and surfaces.

The simplicity of the sculpture Bar # 3, the perfect execution of the beautifully crafted artwork was visually appealing and serenely beautiful. The power of a single vertical sculpture was intensely reflective and philosophical in nature.

Sarah’s ability to hollow out surfaces that played with light and reflected shine and variation of colour was exquisitely explored in Untitled [Horizontal Channel] 2000. This play with light and colour had rich burgundy shifting to black and deep purple depending on the angle of the fall of light in Cluster 2004. The sculpture throbbed with a technical flash that came alive with thoughts of animal nests.

Five groups of three varying sized eclipse like structures were mounted to create geometric intrigue and explore a different view of symmetry. Images from nature simplified to create a minimalist artwork that lingered in the imagination and expressed beauty in form and structure permeated this artwork.

In Variation 11 1999 a seven hundred centimetre length sculptural piece, suggested a wave on the ocean or a line of sky, it explored the concept of the physical and abstract meeting in the line of the horizon.

The triangular prisms gave depth and perspective and the changing navy hues offered an image of silence, stillness and serenity. Shadows were reflected below the artwork because of the slope of the piece. Long distance views created a metallic finish that was mesmerising. Ben Nicholson world famous British abstract painter believed “painting and religious experience are the same thing and what we are all searching for is the understanding and realisation of infinity”.

It is evident in this retrospective exhibition of Sarah Robson that she is meticulous in the quest and creative processes that scrutinize multi-layered philosophical concepts and connections.

Sarah writes in her catalogue “Time, space, the nature of perception and the unity of opposites have been the primary and ongoing concerns throughout my artistic practice”.

These elements existed at the very core of her exhibition. I was particularly drawn to her strikingly refined sculptures.

They captured the complexity and simplicity of beauty and were crafted with intelligence, diligence and a commitment to excellence. 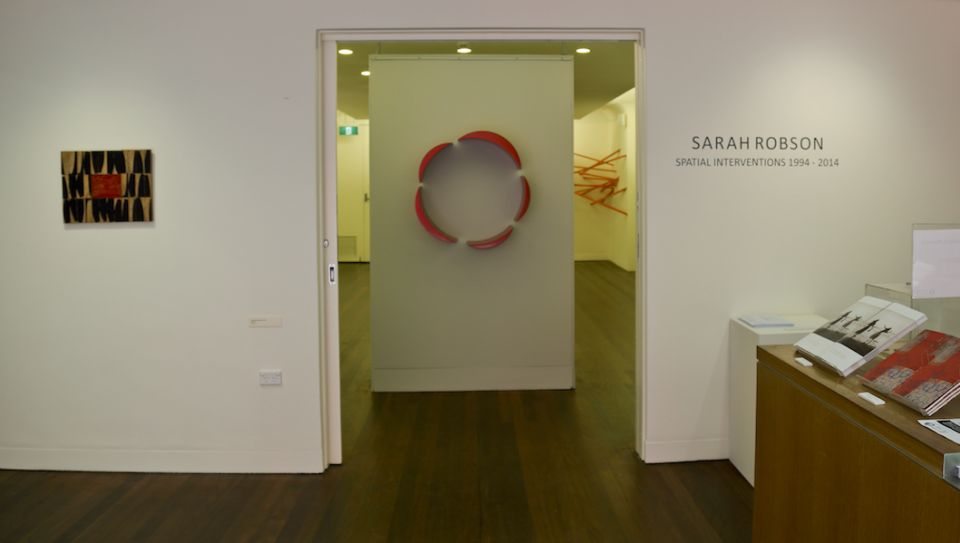 This exhibition is a rare example of a living artist who is eminent in both intellectual and creative disciplines.