Finally drawing my breath after two and a half hours of heart stopping action leaping from scene to scene following the famous British agent 007 James Bond (Daniel Craig) on his latest adventure in Spectre I decided to take some time out to consider how I felt about this much acclaimed movie, which had been so neatly wrapped up in a special package for perfect presentation.

Goodness, what a big back story James Bond now really has, and it is still unravelling via a team of writers innovating him and other characters beyond Ian Fleming’s original novels, into the new age.

As the credits rolled on Spectre, artistically directed by Sam Mendes, I couldn’t but help wonder if the rest of the audience felt as I did that perhaps the writing is really on the wall for James Bond to finally retire from Her Majesty’s Secret Service.

Has our hero finally been brought to a place where he could really just throw away his famous Walther PPK, hop into his beloved old Aston Martin DB5, brought back to life by Q after nearly being destroyed totally at Skyfall, so he could just drive merrily away at the end with the lady of his dreams Madeleine Swann (Lea Seydoux) by his side.

Could it be that simple?

My initial thought is yes, and it should be. And perhaps that was one intention with Spectre, to wrap it all up forever.

The main question however remained.

Why did Bond, after trying so many times to kill him off, keep the villain of the piece the evil Blofeld (Christopher Waltz) aka Franz Oberhauser, who had lived with Bond during his formative years as a ‘brother’, alive; to kill him yet another day?

Was it again simple; a way of setting our hero free – an assassin who becomes benevolent in the end and gives up his licence to kill, which all makes perfect sense to me.

Also, why else would the gorgeous Moneypenny (Naomie Harris), truly delightful Q (Ben Wishaw), the underestimated Tanner (Rory Kinnear) and the truly marvellous M (Ralph Fiennes), be back in the field to support their star turn?

Was it so he could succeed one last time? So I decided keeping Blofeld alive was just a ruse to keep us all interested until the producers evaluate the general reaction to Spectre. Then they could take some time to decide whether to go another round or not. These days the money stakes are huge and Spectre with its story book ending would be the perfect full stop.

It goes beyond saying that despite Sean Connery’s appeal, which has endured for over fifty years, Daniel Craig has in today’s world really surpassed his predecessor in so many ways, including popularity.

Spectre the movie will not disappoint hardened James Bond fans. However good all the other actors are around him, Daniel Craig is outstanding as James Bond.

It lives up to all the hype as Mendes presents a slick, action packed, beautiful to look at film with continuing thrills from beginning to end relating the ‘… high-flown and romanticized caricatures of episodes in the career of an outstanding public servant’*.

Daniel Craig successfully brought Bond back to life in 2006 with Casino Royale and has, over the past decade made himself, supporters and sponsors a great deal of money. 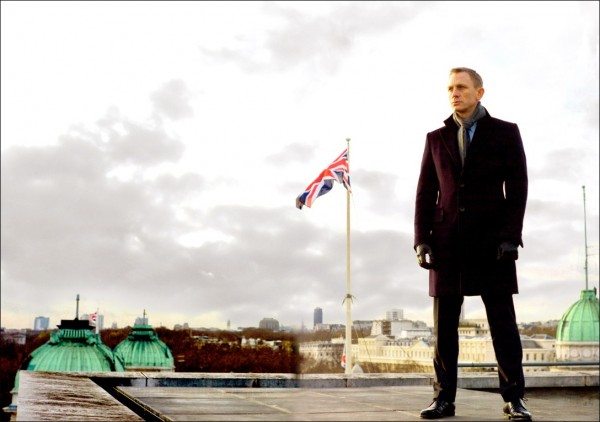 Craig has taken this role and made it his own. Will he continue past Spectre, I would think not. Although am entirely happy to be proved wrong. Starting with all the action on the Day of the Dead Festival in Mexico where the talented technical team demolish half a city block, to performing the largest film stunt explosion ever in Morocco gaining a Guinness World Records title by using 8418 litres of fuel and 33kg of explosives and ending by dramatically imploding MI6 Vauxhall Cross headquarters in London is indeed hard to top.

The costuming is superbly detailed for the girls from the beautifully tailored suit complete with hat and gloves that Lucia Sciarra (Monica Bellucci) wears at her husband’s funeral to the stunning deco styled slinky dress in gorgeous ‘Tiffany Blue’ Madeleine Swann (Lea Seydoux) wears with rich red lipstick as she walks down the train, Spectre presents restrained glamour dressing par excellence. The girls too are very good in their roles.

Monica Bellucci star turn is all too brief, while she is on screen it is illuminated by her magnetic presence. Lea Seydoux is all that we would require in the woman who finally wins James Bond’s heart and causes him to walk away without finally putting a bullet through the brain of the man who had tried to kill her.

In a way not killing his opponent in cold blood provides Bond with a freedom not felt in a long time. We could all feel his shoulders lift from the burden of it all. In Spectre sadly the arch villain Blofeld (Christoph Walz) and his customary white cat didn’t make me feel that he was off his proverbial rocker, despite all the sophisticated torture gadgetry he used on our hero before he escapes with the girl.

Whereas Andrew Scott, who played his deputy C in London is the perfect psychotic.

They looked amazingly complicated to shoot and were filmed in such spectacular and amazing locations they take your breath completely away.

This included the now mandatory high-speed action car chase, which took place this time in Rome.

That new Aston Martin DB10 made especially for the film is a car many would desire, although I do share the nostalgia for the old DB5, it’s more my cup of tea. The Day of the Dead sequence, which formed the ‘opener’ becomes a metaphor really for the whole film.

It is a celebration of our favourite ‘cold war’ hero as he triumphs in the new world and we gain a lesson in how easy it would be for evil to triumph in the technological age.

If big brother is indeed watching so are the evildoers, especially if we are led to believe as in this, they are infiltrating all major government organisations on earth to control us all. If James Bond is to continue along his pathway to justice in the British way of things, it would mean the gorgeous Madeleine Swann would have to die another day.

Basically I enjoyed Spectre immensely. It was a great romp, which is what James Bond is really all about. Glamorous high octane entertainment that is not meant to be in any way ‘real’.