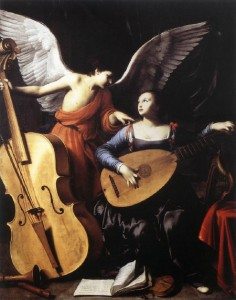 St Cecilia was a high born woman whose ancestors loom large in ancient Rome’s history, because she was believed to have sung in her heart to God alone. Martyred for her beliefs she became patron saint of music. Over the centuries the instruments that have played and the voices that have either sung, or narrated to music, have been a powerful force affecting the lives of many people. Music expresses emotions and ideas in significant forms with rhythm melody, harmony and colour elements contributing to creating an art of sound. It can have both darkness and light, as opposing forces in its make up, highlighting its ability to represent both evil and good. Music creates camaraderie at major festivals.

It has been proven medically to have many therapeutic qualities, including providing an atmosphere wherein calm can prevail in our busy world. In ancient times it is recorded in The Holy Bible that trumpets and people’s voices felled the legendary walls of Jericho. English actor Orson Welles’ radio broadcast of 1938 about an invasion of the world by aliens, against a backing of an ordinary music show, terrified millions. In more recent times Elton John’s tuneful rendition, accompanied on piano, of the poignant ‘candles in the wind’ at Princess Diana’s funeral touched the hardest heart. Nineteenth French poet, playwright and novelist Victor Hugo believed music expressed ‘that which cannot be put into words and that which cannot remain silent’.

Isabel Burton, Aimee Dubucq de Rivery, Jane Digby, and Isabelle Eberhardt pursued an Eastern Star to follow their passion for romance or, making the best of it