An English Rose smelling a Rose by John Williams Waterhouse

A human desire for more than a subsistence level lifestyle is fulfilled to a large degree by the beauty and visual satisfaction we find in gardens, which at different times in history and in different places, has been based on assumptions about ‘man’s relationship with nature’. They are often seen as an allegory for the cycle of human life and death.

Gardens can have a divine, inspiring or animating influence. They are a complex form of visual artistic expression we can enter physically and an observant visitor will never see exactly the same thing twice.

From January 2000 – July 2005 it was my privilege to live in an apartment atop the historic St Martin’s House in the precinct of St John’s Cathedral at Brisbane during the last and most important phase in the final completion of its great west end (2008). The Turret apartment atop St Martin’s House in the precinct of St John’s Cathedral at Brisbane where I lived, January 1, 2000 – June 20, 2005, the open door led to the Juliet Balcony…

St Martin’s House was a building whose architectural design was inspired by the romance and charm of the nineteenth century English arts and crafts movement. The space where I lived became a meeting place for many. It had a Juliet balcony and somehow it always seemed particularly appropriate to me to look out from it, as if from a castle’s Turret, onto a garden filled with roses and lavender. 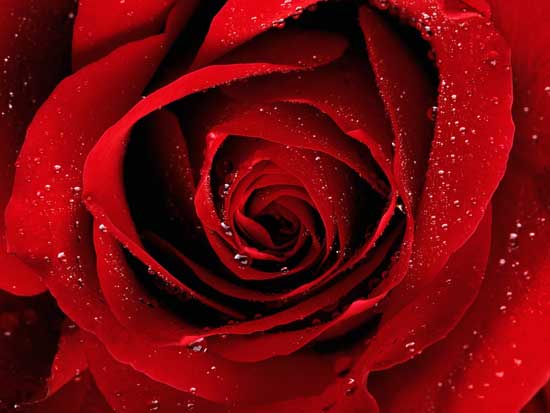 To aid the completion of the cathedral The National Trust St John’s Cathedral Completion Fund commissioned internationally renowned Ross Roses of South Australia to produce a rich red rose as a fundraiser and to celebrate all those people who had contributed to its completion. The Rose symbolic of the Virgin Mary

A competition produced its botanical name Rosa St John Brisbanensis Rubra and a colleague and I planted the dozens of St John’s roses I had donated in the main Cathedral gardens. I also under planted andd tended daily to one of their favourite companion plants, French lavender.

Also invited by the Dean of the Cathedral David Thomas at that time to write the script for the launch of the St John’s Rose, the text was read out at a special church service.

Said the Passionate Shepherd to his love

‘Come live with me and be my love
And we will all the pleasure prove
That hills and valleys, dales and fields
And all the craggy mountains yields…

The rose, that glorious flower we all admire, crosses all boundaries of culture in its quest to win you to its favour. With its dramatic combination of beauty and fragrance it reminds us of war and peace, of Ancient Greece and Rome and, of Pagans and Christians.

The Rose, delicate and ephemeral, represents the frailty of the human body and the transitory nature of human life. In the language of flowers the rose has many characteristics, including simplicity and beauty.

Medieval legend asserts the first roses appeared miraculously at Bethlehem as the result of the prayers of a ‘fayre Mayden’, who had been falsely accused.

In Christian symbolism, the rose was appropriated to the Virgin Mary, one of whose titles is the Mystic Rose, as it is emblematic of a paragon or, one without peer.

The Rosary, whose beads were originally made of ground rose petals and rose oil, is used as a meditative discipline, focusing on the mysteries of the incarnation, the passion and the resurrection.

When praying The Holy Rosary you can meditate on the mysteries of joy and on the sorrow and glory of Jesus and his mother Mary. The Persians considered the rose the most beautiful of flowers and for century’s writers, poets and artists sung its praises.

The Phoenician saint, who established Christianity in Persia, carried the Holy Rose or Rosa sancta, as it became known, to Abyssinia where it is still found in churchyards today.

Traders along the old caravan routes carried it to Kashmir, Afghanistan and India. In 1187 the Sultan Saladin used 500 camel loads of rose water from Damask Roses to purify the Temple of Omar, which had been used as a Christian Church.

The citizens of the island of Rhodes, the name of which comes from Rhodon, the Greek word for Rose, adopted it as their symbol.

The earliest written record of a rose appears on Sumerian tablets 5000 years ago, with a sculpture of the same period depicting a golden ram caught in a thorn bush, on which blooms a rose.

Rose leaf fossils have been retrieved in many intriguing places. The first recorded painting of a rose was on the walls of the Palace of King Minos in Crete at Knossos.

The rose was the symbol of Aphrodite, the Greek goddess of love, who chose it as her personal emblem.

In the Iliad the legendary Greek poet Homer described the shield of the Greek hero Achilles as being decorated with roses and, how Aphrodite came by night to anoint King Priam’s son Hector’s body with rose oil before it was embalmed, after he had been slain by Achilles. 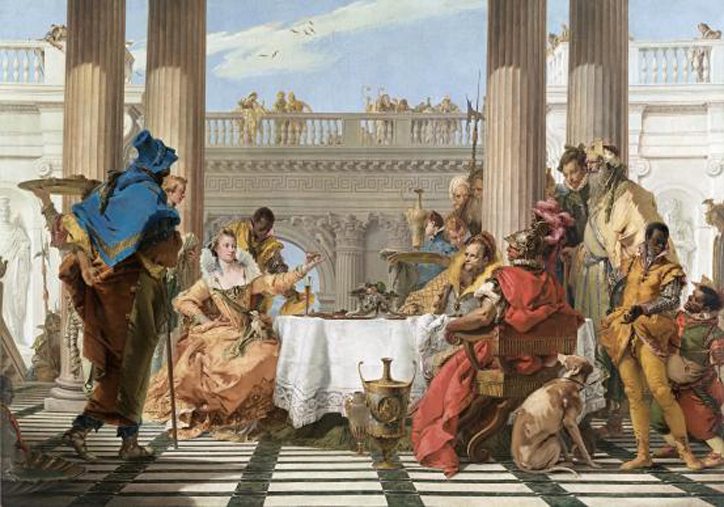 The Egyptian Queen Cleopatra, it is said, soaked the sails of her ship with rose water so that as she departed from her lover Roman politician and general Mark Antony, ‘the very winds were lovesick’.

The Romans are attributed with introducing the rose to England. A Benedictine monk and English historian known as The Venerable Bede possessed a copy of Roman author and natural philosopher Pliny the Elder’s work on natural history, in which he states that the Isle of Albion as England was known in the 1st century, might have been named for the white roses that grew wild all over that isle. Love is like the wild rose-briar;
Friendship like the holly-tree.
The holly is dark when the rose-briar blooms,
But which will bloom most constantly?**

Romans lavishly celebrated the rose. Heliogabalus, a wealthy citizen strewed rose petals over the couches, porticoes and grounds of his palace. He scented the air with fountains of rose water when entertaining.

The Emperor Nero showered rose petals on his guests from the ceiling of his dining hall where they had been received on a carpet of rose petals. 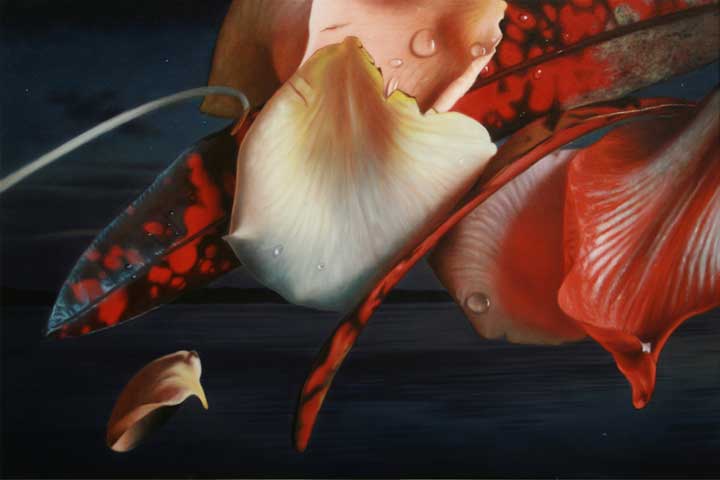 He also asked that the seashore near Naples be strewn with roses when he visited and Roman heroes were glorified with crowns and garlands of roses.

When the rose was out of season, unable to endure its absence, they imported them from North Africa, as well as rose scent from Arabian and Indian merchants.

Petra, the ancient capital of the Nabataean Kings, was celebrated in verse as the Rose Red City.
Match me such marvel, save in Eastern clime
A rose-red city – half as old as time 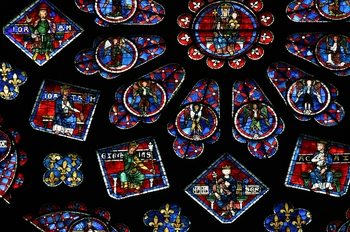 In twelfth and thirteenth century France stained glass ‘petals’, in the shape of a rose radiated from a central figure in the legendary Rose windows installed at Chartres Cathedral. Rose windows were repeated in various configurations in Gothic cathedrals all over the world, including St. John’s at Brisbane.

In England in the fifteenth century the warring factions of York and Lancaster were united when Henry Tudor married Elizabeth of York.

This union was symbolized in the Tudor rose, which flaunted both red and white petals. The Rose became a symbol of papal benediction at Rome and a golden rose bush was presented to the Italian City of Sienna by Pope Pius II in 1459.

Rose coloured vestments may be worn by the clergy on Rose Sunday, the fourth Sunday in Lent when golden roses, are still to this day, blessed by the Pope and sent to foreign powers saying…

‘Accept this rose at our hand, who, all be it unworthy, holds the place of God on earth, by which rose is typified the joy of the heavenly Jerusalem…’

The rose chosen for St. John’s Cathedral at Brisbane to celebrate its completion is a rich red rose… While living in The Turret my contribution was to design, donate,  plant out and tend the main courtyard and cathedral front gardens. This included the lovely roses, the lavender and many of the plants in its gardens.

In the courtyard before I left I planted an olive tree, because besides having Homeric style, grace and gravity, symbolically it represents the hopes and aspirations of humankind and I am an eternal optimist.

Now I am living in Melbourne it is my hope the communicants are tending the gardens at St. John’s and looking after the roses and all the other plants. After all gardens are at the meeting place of heaven and earth.

**The Passionate Shepherd to His Love was written by the English poet Christopher Marlowe (1564-1593). In addition to being one of the most well-known love poems in the English language, it is considered one of the earliest examples of the pastoral style of British poetry in the late Renaissance period.