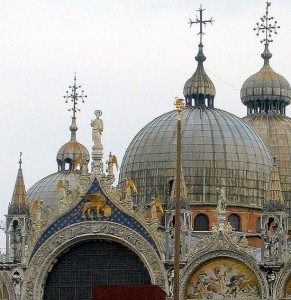 St Mark’s Basilica at Venice is one of Italy’s most famous Roman Catholic churches described by nineteenth century English art critic John Ruskin as ‘a vision out of the earth…a treasure heap it seems, partly of gold and partly of opal and mother of pearl’. The great domes of St. Marks were originally much lower and in the Byzantine style. They were topped in the fourteenth century with the present lead outer domes, creating a picturesque silhouette. The half dome lunette on the Sant’Alippio Door is of enormous iconographical interest in that it reflects the true appearance of the chief features of the west front of the present building in its earliest known state, which today has disappeared. The image, which is faithful to the architectural reality commemorates the translation of the entire body of St. Mark into the very Shrine that Venice had built and rebuilt during the 9, 10th and 11th centuries around the saints relics. Sited at the east end of the PIazza San Marco adjacent and connected to the Doge’s palace, because it used to be his chapel, it was 1807 when it became the cathedral church of the Archdiocese of Venice. Its original form was transposed from Constantinople and is modeled on the Church of the Holy Apostles and the Haghia Sophia. ‘Nothing is sweeter to the human eye than the sight of gold’ wrote Lorenzo da Ponte, the Venetian born author of three librettos for Mozart. The interior of St Mark’s is covered in golden Byzantine mosaics, depicting everything from scenes from the Old Testament and the Life of Christ. Where has respect for others, self and civility gone and why are so many people giving continual offense to wider society in a private or professional capacity?