The lyric’s for George Gerswin’s song I’ll build a stairway to Paradise from the 1951 movie American in Paris could have easily been written to describe the so called Heavenly Gate, a portal that could possibly lead to paradise.

This amazing place is accessed by the longest passenger cableway anywhere in the world followed by a bus ride that would lead the most hardened heart pounding.

The winding road leads to the place high up in the mountains where you tackle huge flights of man-made stairs that you need to surmount in order to reach the ‘Heaven’s Gate’ cave. 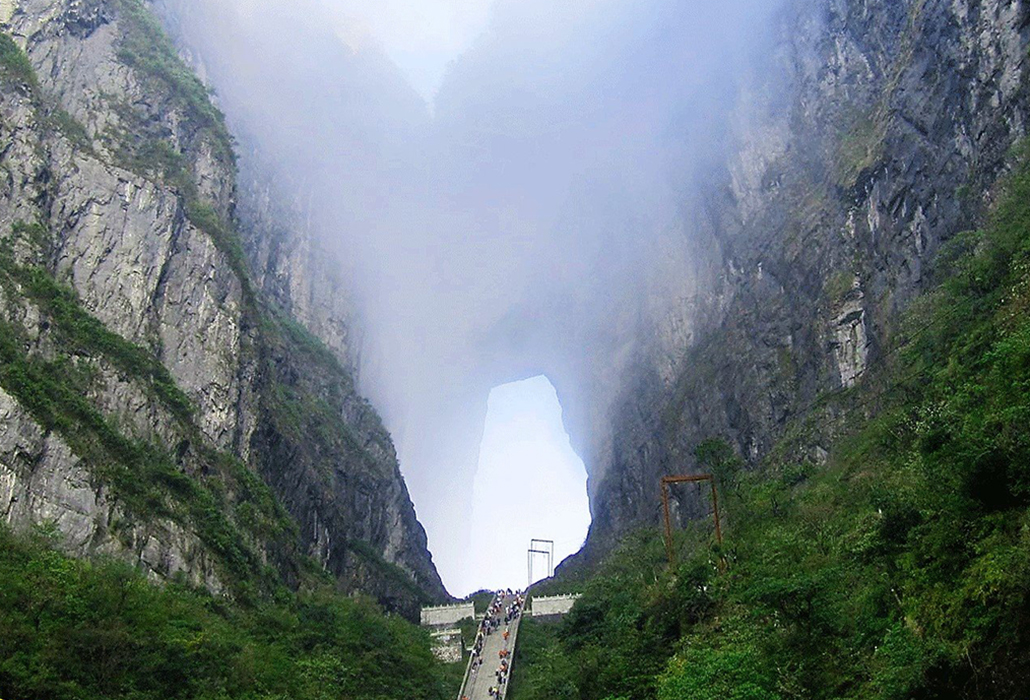 Heaven’s Gate is a naturally occurring erosion cave phenomenon set into the limestone greatness of Tian Menshan Mountain National Park, Zhangjiajie in north western Hunan Province, China. It’s a site that was well known during the Chinese Tang dynasty 618- 907, when a temple was also built near the summit of the mountain.

Secluded, shrouded in mystery, the exhaustive hike up the hill follows an old path of carved stone stairs, which are dotted with small huts along the way. The entire path points continually towards the portal in the peak, with the views on the way up making it perfectly obvious why generations of people in Hunan believed that Heaven’s Gate was truly the realm of the gods.

It was from the Han dynasty (206BC – 220 AD) onward that the Shih chi (record of history) of each dynasty of China was documented. From the Tang dynasty 618- 907 onward China’s prestige grew throughout Asia and she began to be involved in affairs well beyond her borders.

First compiled by Ssu-ma Ch’ien, the ‘great scholar of Han China’, these ‘standard histories’ continued until 1911.

Among the world’s great arches Heaven’s Gate is unique, recorded in documents from China’s “Three Kingdoms” period when the opening was reputedly formed during one cataclysmic event as the back of a huge cave collapsed in 263 AD.

More recently stunt-flying teams have flown through the opening in 1999 and 2006. Heaven’s Gate must be near the top of anyone’s natural wonder bucket list. Spectacular cave and rock formations in nature have long attracted explorers. With the countryside of China pretty well shut off to the western world during the twentieth century, some of its greatest natural wonders are only now being fully revealed in all their glory to our contemporary world as they turn to practical account, the commercial possibilities for their own people as well as western tourists.

Then there is the Wulingyuan Scenic area, which is also in the north west of Hunan Province, where over 3000 giant quartz sandstone pillars, some of which are over 800 metres or 2,600 feet in height, stand like silent sentinels in the Wuling range of the Zhangjiajie National Forest Park.

The region is home to endangered plant and animal species. Chinese plums, yew and pines are only some of the coniferous species among the 3000+ species of plants, many of which are valued for their timber, medicinal and ornamental purposes. This is the land where the Chinese giant Salamander roams. The French in particular admired its lizard like appearance and it became associated with an ardent lover when it was the emblem of Francois 1 King of France whose court rivaled that of King Henry VIII in England, at least until his death in 1547. In ancient times this area was remote and inaccessible and local legends indicate Zhangliang, who was a lord of the Han Dynasty (206-BC-AD 220) lived in seclusion in Wulinghyan and was buried below the Zhangjiajie mountain. It remained almost untouched by man until the founding of People’s Republic of China in 1949.

The whole area was only approved to be a scenic and historic interest area in 1988 and then in 1992 it became a UNESCO World Heritage site, ensuring its protection.

With spectacular ravines and gorges, streams, pools and waterfalls it contains some 40 caves as well as two large natural bridges – the Bridge of the Immortals and the Bridge Across the Sky

If you want a really heart stopping experience the Bridge of the Immortals comes close.

From the bridge you have a breathtaking view of the mountainside beneath and the clouds as they touch the mountains.

It spans a space in Mount Tai, the tallest peak and one of the ‘Five Great Mountains’, which are sacred in China.

They have been places for pilgrimage for centuries where paying respect to the holy mountain was an important journey to take. First Bridge Under the Sun in Hunan Province of China, photographed by Ray Millar, Arches UK The Bridge Across the Sky is also spectacular, a natural arch eroded into sandstone and also known as the First Bridge Under the Sun captured by Arthur Millar

It joins two mountains together in a natural land bridge, over 1200 feet  high.

They do not have religious affiliations, but many of their characteristics would fit into the criteria for establishing a Taoist or Buddhist precinct

The Chinese love building stairways and there are many to climb to reach these heights so tourists will need to be fit.

Many of them only have a chain to hold onto so if you are afraid of heights its probably not an adventure for you.

Still, you rely on every reason under the sun why not to go, but if you are fit, whether old or young then, perhaps you should just try for fun.

For the first time Pantone, THE “go to” designer colour chart, has introduced two shades as colour of the year, Rose Quartz and Serenity. And I’m loving them both! Just gazing out into the sunset of last nights dusk sky, it struck me that the tones I was dreamily in…