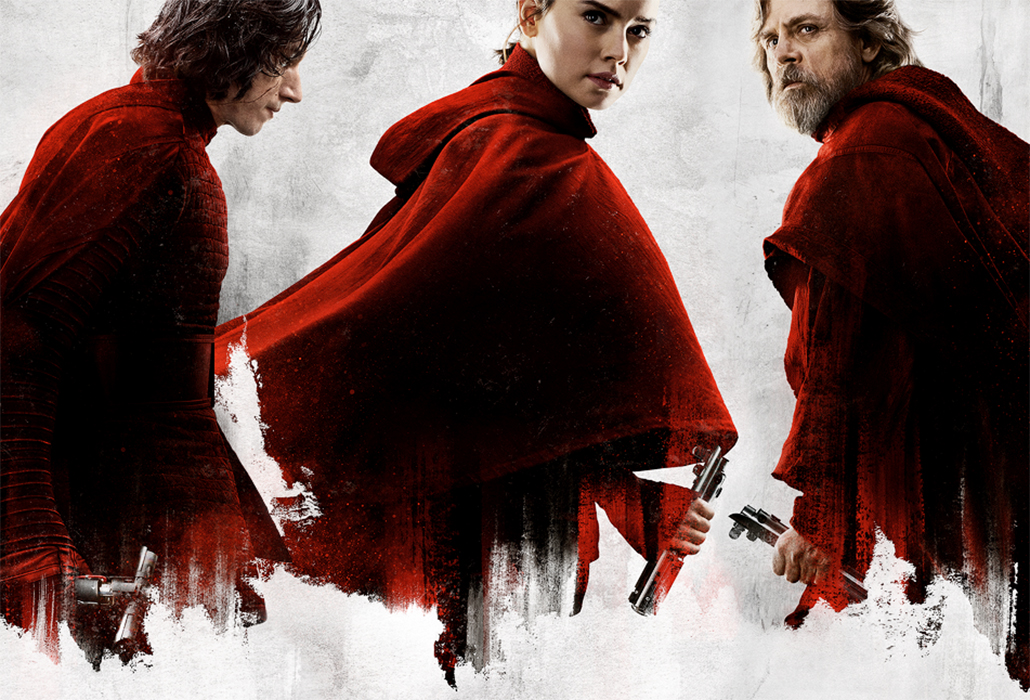 Star Wars: The Last Jedi is full of dazzling visuals and offers an engaging story. It is indeed transcendent entertainment, full of wit and wonder, with clever lines delivered by committed actors, all with a distinctly human touch.

There are a number of story lines running through Star Wars: The Last Jedi Episode VIII, that will not resonate with some fans, but the Director knows we have reached that point in social history when we realise our heroes can be flawed. 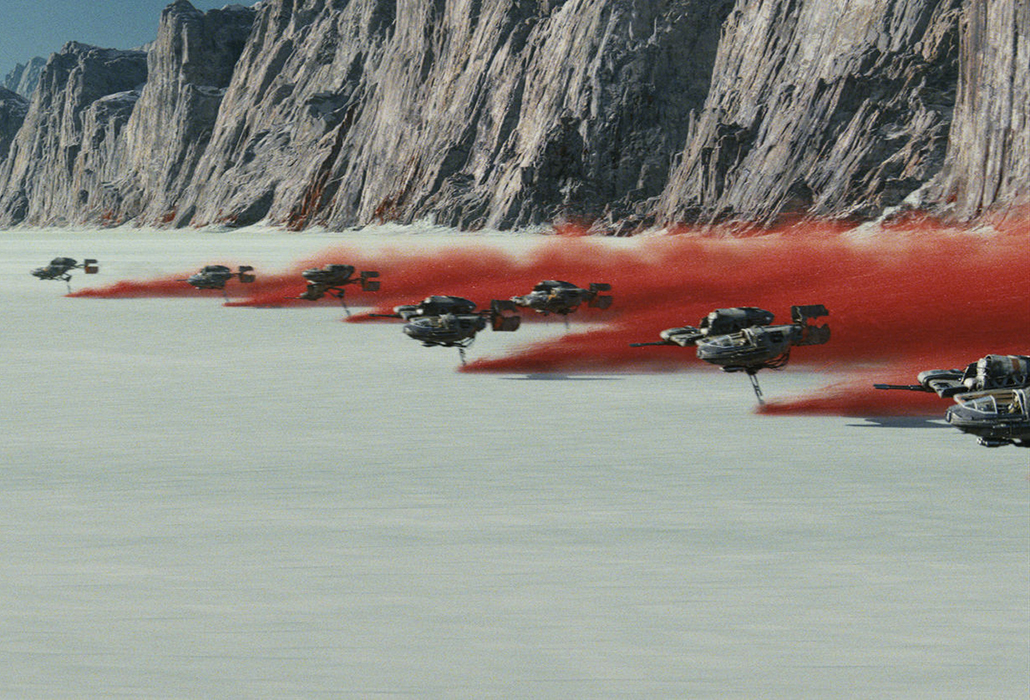 We are all human and the pathway Rian Johnson has chosen to tread is examining his characters, including their actions, motives and reasons for doing what they do in a particular way, is indeed brave, but in all honesty, the one he needed to take. 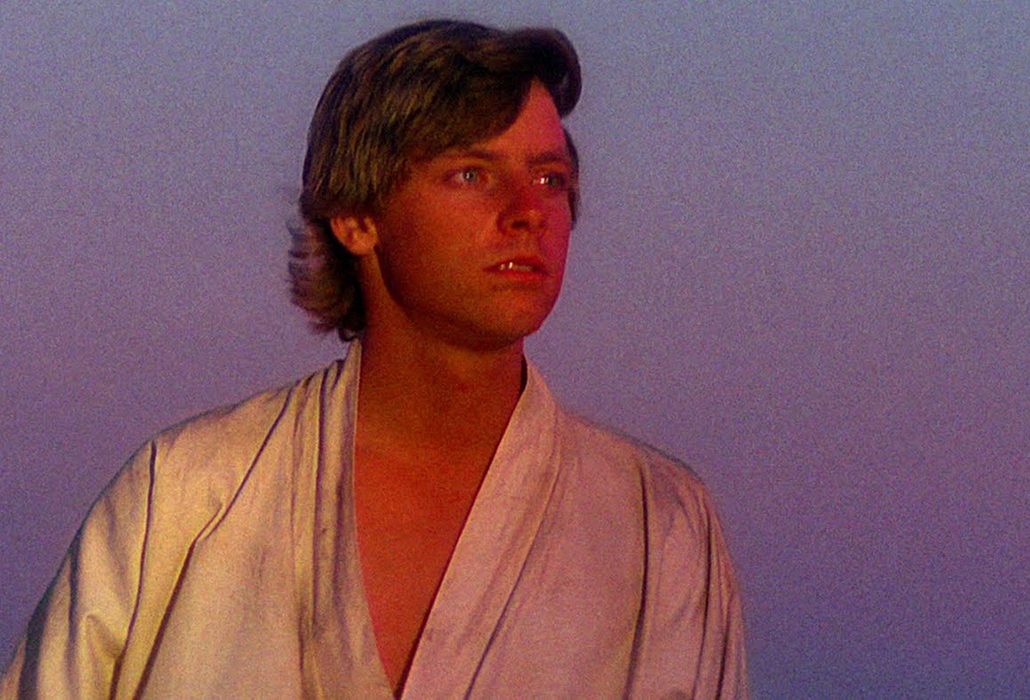 In so doing, he has earned the ire of those out there who pin their hopes and dreams on heroes always rising above the more commonplace to take us into new realms that are nothing more than fantasy.  Their hero Luke Skywalker was an inexperienced but passionate youth full of promise when the adventure began, and like us all, he has been changed irrevocably by the circumstances of his life. 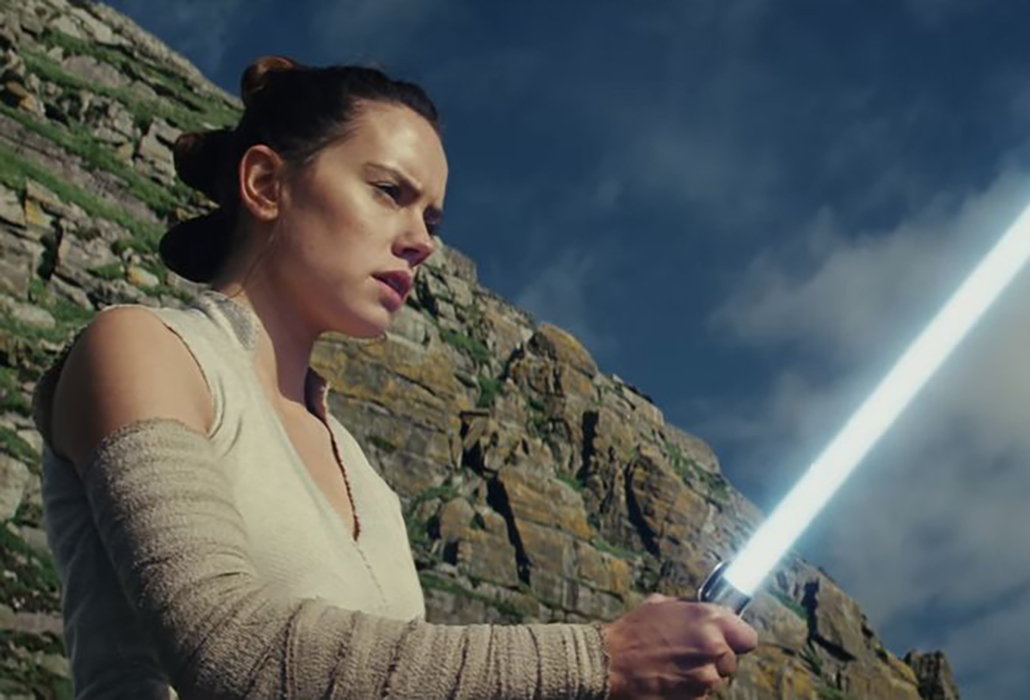 Star Wars: The Force Awakens left Rebel heroine Rey standing on rocky ground facing down Luke Skywalker (Mark Hamill) offering him his light sabre. Her life as a scavenger on Jakku, scrounging among detritus and living off scraps, has given her time to think, surely one of the most luxurious gifts she could have received in a world at war, one she’s now been drawn into, forever.

Please don’t read any more if you haven’t seen the film yet, there is a spoiler free review for you – read more.

This is a spoiler review for those fans who have by now probably seen it more than once (I have-three times). 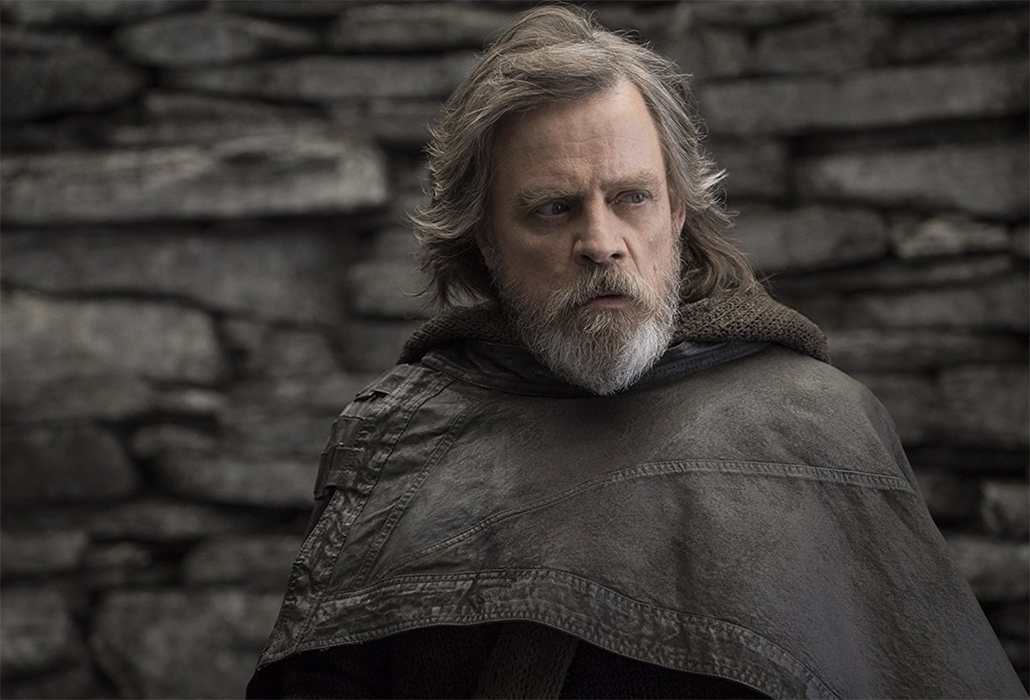 Luke Skywalker (Mark Hamill) is now definitely the best of all heroes, embracing his own failures in life in order to give the rebellion help in their hour of need. He’s crusty, cantankerous, cranky and disillusioned and has to work really hard to bring all his charm to the fore, as finally and emphatically he becomes the ‘cool’ dude we really all know him to be.

His expressive wink when he finally sees C3-PO, proves it.

There is no use for final words between them… and his encounter with R2-D2, who prodded his conscious awake by showing him the original hologram of Leia pleading for help from Obi Wan Kenobi, while a low blow, is also very touching. 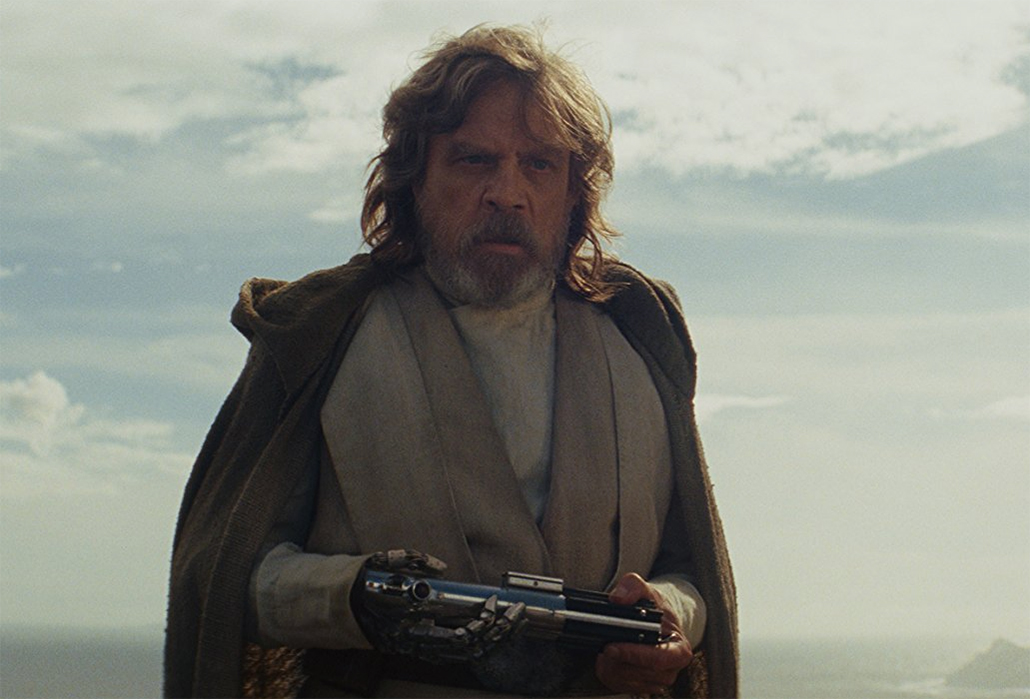 And, as he declares himself, he’s not the last Jedi. He is the one however who will offer assistance to his successor Rey (Daisy Ridley), giving her all the support she needs so she can lead those ordinary people in the galaxy now imbued with The Force, along a pathway forward while inventing a whole new age for space adventure. 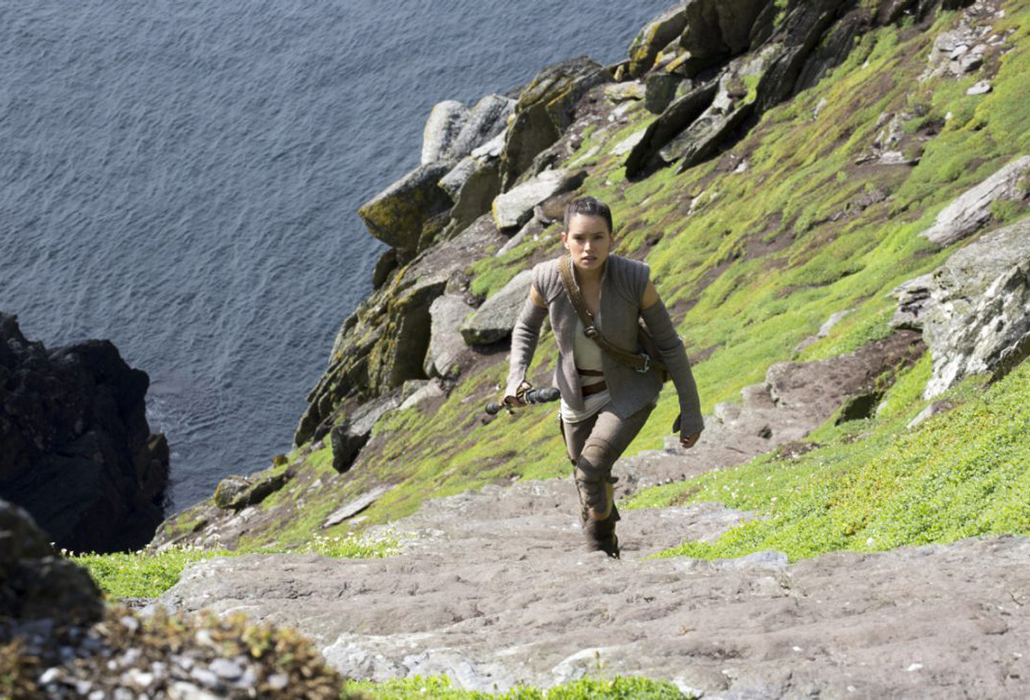 For this new visit with friends old, new and true, the action takes place from the rugged cliffs on the island of Ach-To, really Skellig Michael in the Atlantic sea off Ireland, where Luke lives in the remains of a 6th – 8th century monastery.

It ends on the planet Crait, an extraordinary landscape which exists at Salar de Uyuni in Bolivia, where anyone would feel transported to a new world, with its endless white salt plains contrasting so dramatically with its deep red soil, especially when it is dug up during a bloody battle between the forces of darkness and light. 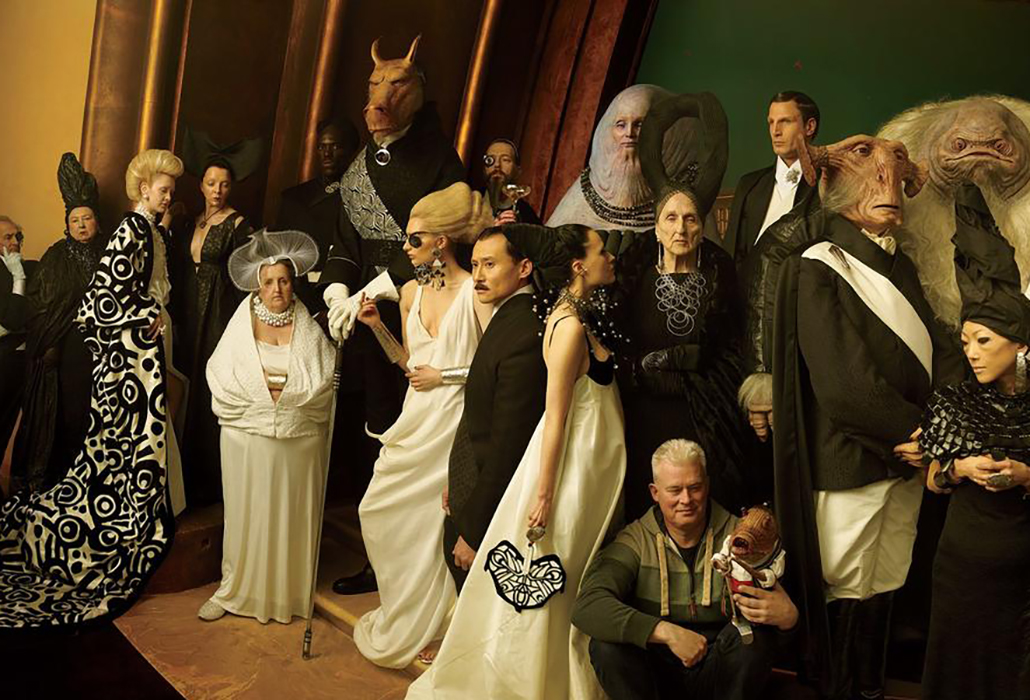 In between if we are not in space there are the colourful casinos and naughty nightlife of Canto Bight, really the walled city of Dubrovnik, a Croatian city on the Agean Sea, where the rich play out their lives in glamorous style, although it really is only skin deep. The city is filled with casinos, racetracks, and other expensive distractions.

For Star Wars purpose, Canto Bight is a place of both opportunity and high stakes, the place where our former Stormtrooper hero from Star Wars: The Force Awakens FN-2187, aka Finn (John Boyega) is sent on mission by his pal Poe Dameron (Oscar Issac) with a new partner in tow, Rose Tico (Kelly Marie Tran). 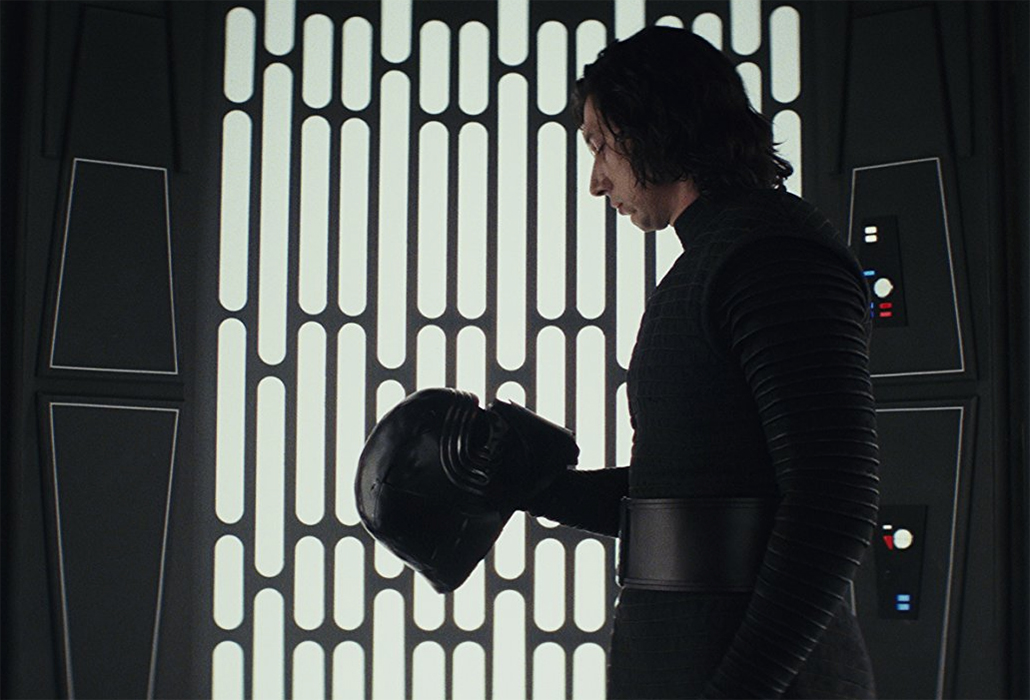 Good to say straight away director Rian Johnson treats as us equals in intelligence.

While he does allow Luke Skywalker to descend into a place deep inside himself and also abandon using the Force, he is helping him to become the man he needs him to be to face down his former pupil Kylo-Ren, who is by now growing daily in evil.

As Princess-General Leia (Carrie Fisher) reminds us poignantly… dead heroes are no use at all, as she sets out to train Poe Dameron up to take over the leadership by demoting him when he deliberately disobeys her orders. 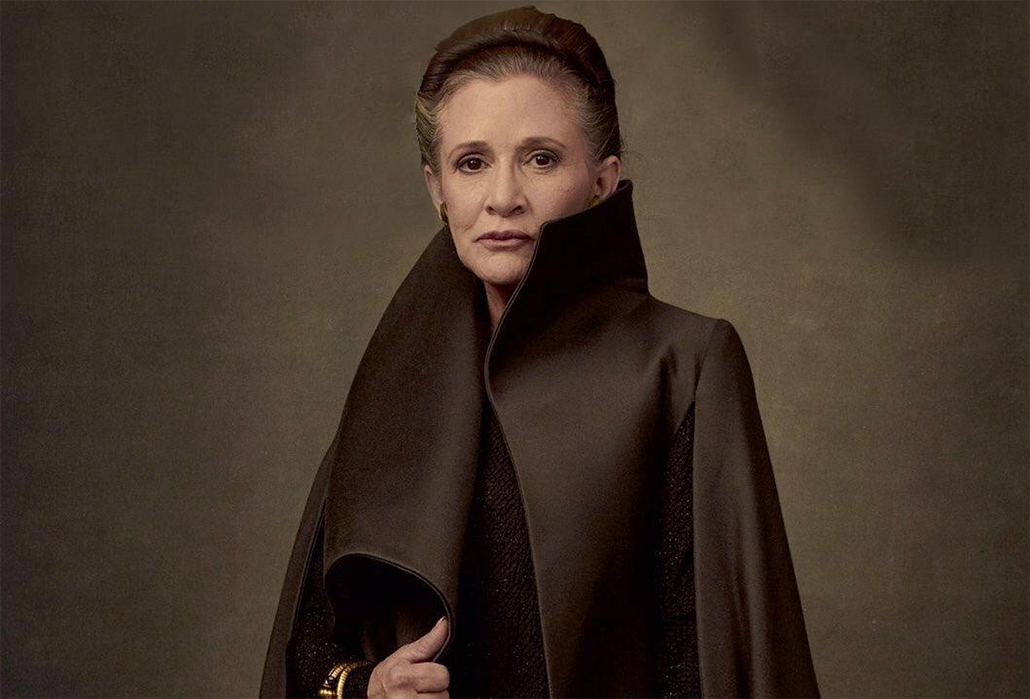 Her magical moment comes when blasted out into space when her bridge scores a direct hit delivered by a first order fighter group led by her son Kylo-Ren, she uses her own access to The Force to guide herself back to the command ship to be rescued by Poe. At the moment Poe is nothing but a reckless ‘flyboy’, well at least according to a new ‘badass’ commander Vice Admiral Amilyn Holdo (Laura Dern). She reminds him he has been demoted, when she takes over the fleet when Princess Leia is lying unconscious and injured.

He is forced to embrace how his own failures have contributed to the place where they find themselves now, at the complete mercy of the First Order command ship with Kylo Ren as Supreme Leader and General Hux as his General. It will change him forever, as he learns the lessons of failure.

From now on he will become responsible for his actions.

Focusing on the here and now however, the First Order are pursuing just a handful of rebels who are left to the planet Crait, where in an old rebel base they will make their final stand against the First Order and quite simply, overwhelming odds. 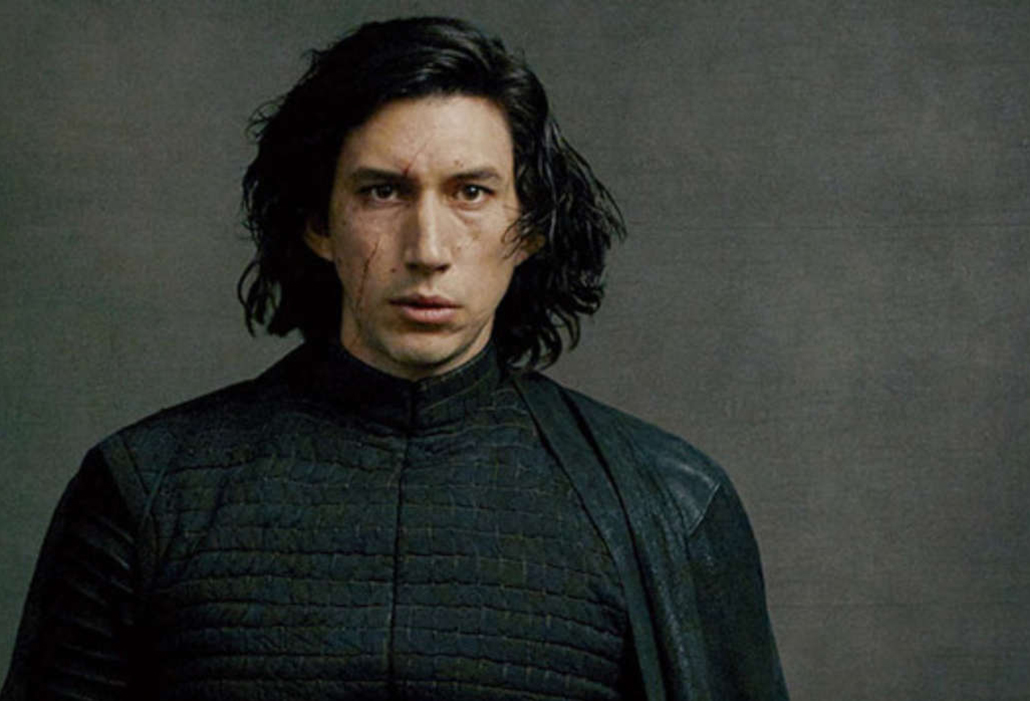 This is where Kylo-Ren ultimately fails because he underestimates the earned wisdom of his old teacher Luke Skywalker, who through a single act of bravery and misdirection, is able to trick his former pupil into believing his being there to take him on is actually real.

It’s a homage to his teacher old Ben Kenobi, who in the first film in the original trilogy warned his pupil Luke Skywalker as he placed the helmet on his head with the blast shield down to stop him from seeing said, “Your Eyes Can Deceive You” – don’t trust them. 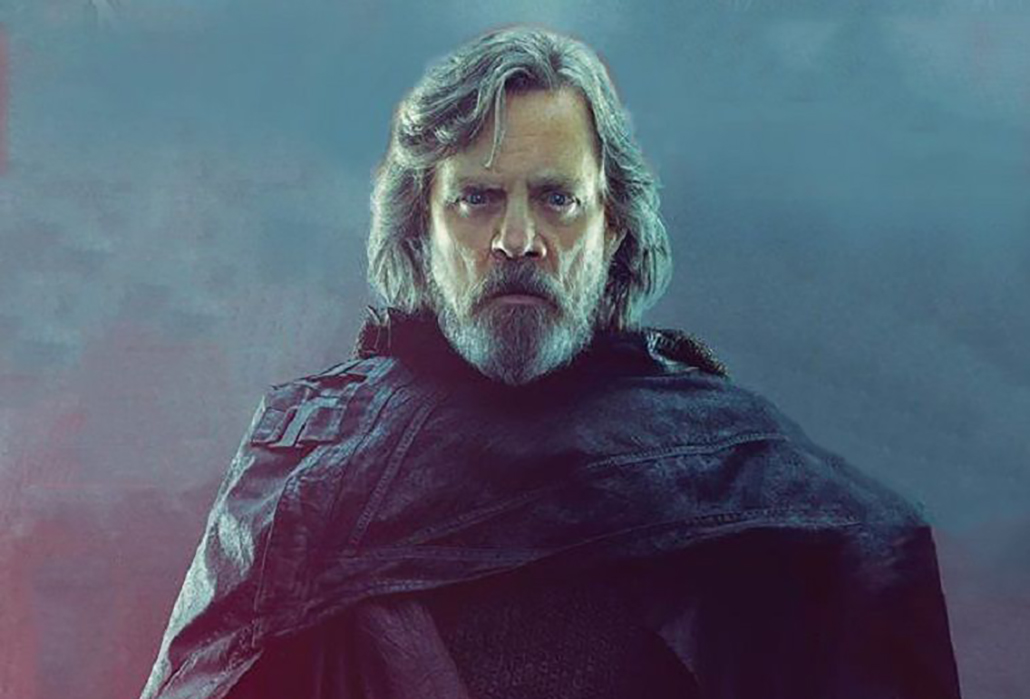 At the end Luke Skywalker is once again using all his optimism to bring about new hope as he offers his friends and their colleagues a chance to escape the horror of annihilation so that they can become the ‘spark that ignites a new rebellion’ in the universe.

When exhausted by all the effort of projecting himself as a hologram, Luke Skywalker finally ascends to the Force with Leia and Ray sharing his journey, his promise to Kylo-Ren is also true; if you strike me down in anger then, like your father, I will always be with you.

Jurassic World: The Exhibition at Museum Victoria is suitably scary, allowing kids to get up close to a Tyrranosaurus Rex, a Brachiosaurus and Pachyrhinosaurus