Oriental, or occidental, ceramic traditions since antiquity have undergone many cross fertilizations due to their exposure to various cultures around the globe. Earthenware’s have a long history, stretching back into the Neolithic period (c9500 BC – c1500 BC), when the earliest pottery was baked over a wooden fire and a combination of iron in the clay and oxygen gave it a rich red colour. South Australian ceramic artist Stephen Bowers (1953- ) draws on historical and cultural influences while imagining his own sophisticated transforming earthenwares.

Today Stephen Bower’s wonderful works can be found in many great art institutions and private collections both nationally and internationally. In Sydney he is represented by the Robin Gibson Gallery. 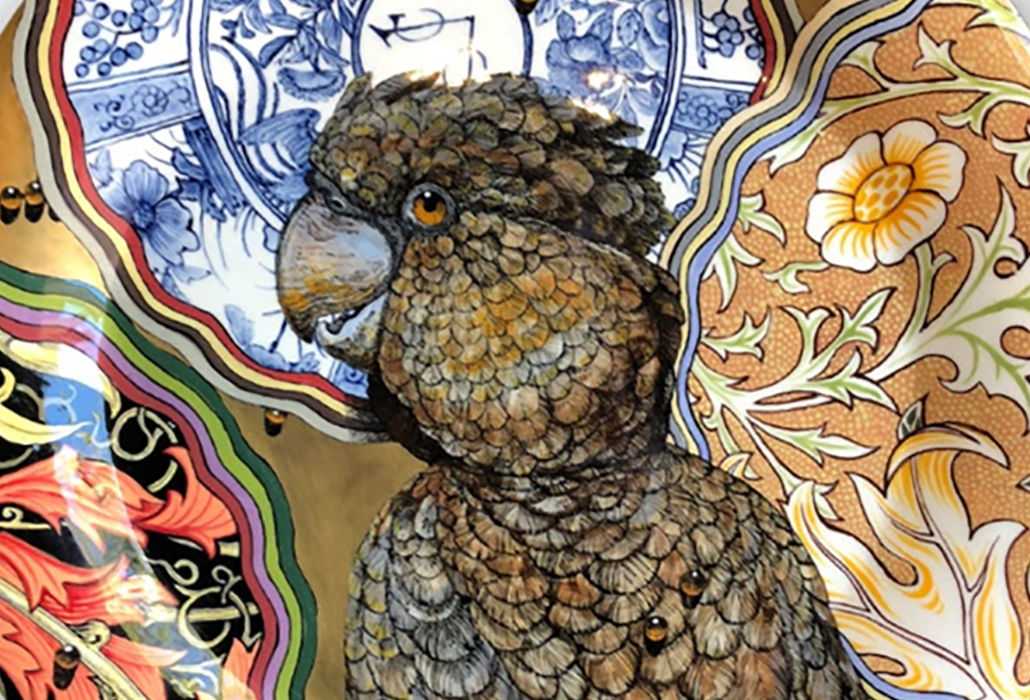 Works by Stephen Bowers not only make you want to shout Bravo, but also delve into their exquisite detailed painting to see what you may be able to discover, which whatever the outcome is sure to delight. 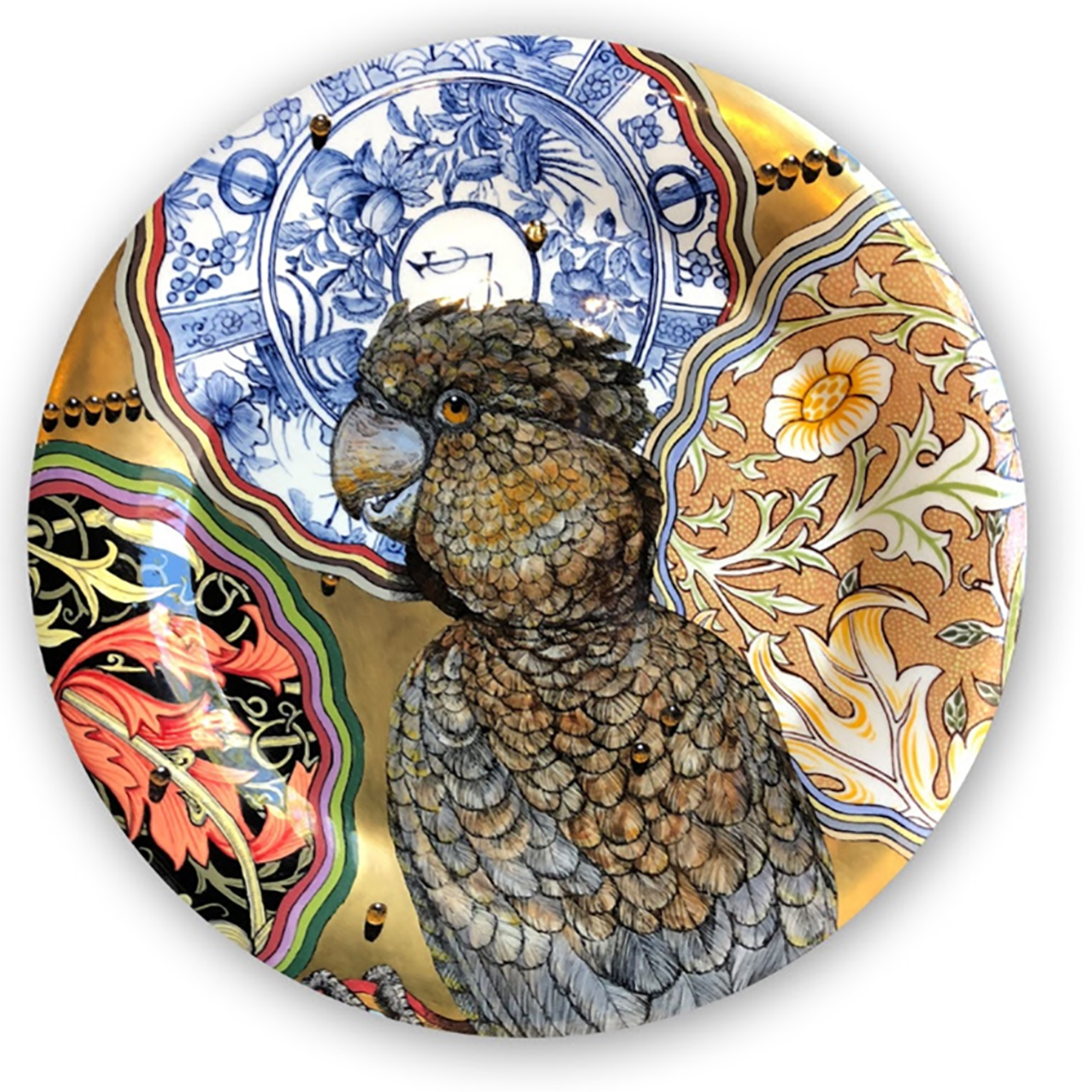 He creates extraordinary complex and highly original works from sources that not only stimulate his own intellect, imagination and inventiveness, but also our own. This commanding ceramic platter is in the National Gallery of Australia. Its profuse decoration combines his witty narrative with dexterous skills to produce a sensational result. I love also that he carries the design element onto the back of the plate.

The description says the links he makes  ‘… are as diverse as the naturalistic on-glaze floral imagery of china painters of the early twentieth century, the mid-century interpretations of Australian indigenous art, and the cheeky irreverence of the ornate and satirical decorated porcelain work of a number of other Adelaide ceramicists during the 1980s.‘

Bowers uses many techniques to achieve his wonderful effects. His pieces are fired multiple times to secure his detailed underglaze and overglaze painting plus the colours and intricate line illustrations, which help to provide such a sumptuous overall dynamic decorative milieu. He has been quoted as saying “I like… rich ornamentation, but I also like defusing it, giving it a slightly funky edge.”

Bowers started his rise to fame during the heady days of the 70’s when arts and crafts became a passion in Australia among the post war generation who let down their hair.

Just like his peers, he declared irreverence for many ideas and institutions and deplored the ‘stuffiness’ of society, setting out to invent the modern age by breaking the rules.

He was not out to ‘meet expectations of visual arts theory’ but to explore his own creative freedom’. An integral part of that group, Bowers has since carved out a great niche for himself in the worlds of Australian and international ceramics and art, skirting ‘the edge of kitschness, while investing authenticity into the use of Australian symbols in the hope of developing our native visual language’. Bowers revels in presenting us with an array of visual and textual puns’, asking questions of us all as he combines images gleaned from the rest of the world and Australia’s rich heritage in flora and fauna decoration.

As a result his works have become a showcase revealing his considerable ceramic skills that while respecting traditions dating back thousands of years have added another important dimension to the Australian vernacular ceramic tradition. Most of his pieces would be able to send its owner on a journey of entertaining scholarly study for some years.

He takes an image such as the much loved form of a naive English Staffordshire dog and covers it in blue and white decoration representing the popularity of Chinese ceramic wares decorated with cobalt oxide.

This was a colouring agent used in Persia, Syria, Egypt and other centres by 2000 before the Christ event. In China the use of Blue and White seems to have commenced during the Tang Dynasty (618-906 ACE) when some of the most famous of their earthenware were produced.

Blue and White’s use was considerably developed in connection with porcelain wares from the Yuan Dynasty (1260-1368) onward, and during the Ming Dynasty (368-1644) reached a crescendo in both painting style and technique in wares exported to Europe, via the China Trade.

The arrival of Blue and White wares in Europe provided the basis for many of the decorative patterns subsequently copied or adapted by European earthenware factories in the production of faience. One of the most popular Blue and White scenes for years was the so-called Willow Pattern and Bowers takes some of its distinctive elements, and inserts a blue Ozzie ‘kangaroo’ and a bird into the mix, creating a scene that is both clever and charming.

The name Willow Pattern has generally been applied to the standard design that emerged in the early nineteenth century and became very popular during Victorian times.

The Willow Pattern’s earlier versions vary a good deal and it is impossible to attribute them to any particular maker. A standard pattern however emerged early in the nineteenth century and has been used ever since

It is generally accepted the English potter Thomas Minton engraved the earliest pattern with a willow tree when he was apprenticed to Thomas Turner at the Caughley porcelain factory, which is known as the Two Figures Pattern.

Minton moved to London where he engraved it on copper for another great potter Josiah Spode. In 1789 he became a free-lance engraver and supplied many of the early Staffordshire ceramic makers of printed blue and white wares.

So this miniscule pocket history is attached to a much broader one reflected in Bower’s wonderful piece, which he calls ‘A Little Bird Told Me’. 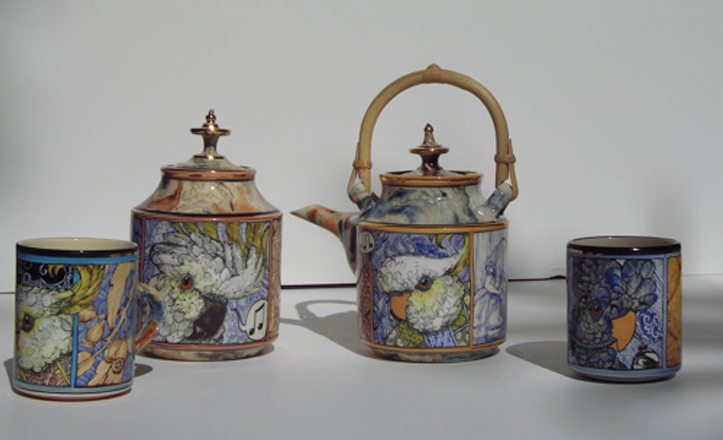 By way of contrast Stephen Bowers delights in covering such practical functional items as mugs, teapots and tea caddies with profuse decoration, although I am not sure if those who purchase them would want to use them, but rather revel in their delicious juxtaposition of shapes, colours and textures. Some of Bower’s works are marvellous bravura art pieces, like great wares found for centuries in great palace complexes, which transform any setting they inhabit such and are completely captivating.

From the comfort of familiar, everyday items, to the alchemy of deluxe and super deluxe bravura museum pieces such as create fine, resolved detail and striking images such as his Skangaroovian Palaceware , which is painted with underglaze colour, has a clear earthenware glaze and on-glaze gold lustre and enamel, which can take your breath away.

His artist’s statement says: “I create works that are sometimes useful but always decorative. I am interested in the ability to look back and recontextualise stories, interpret meanings and examine the legacy of traditions. As well as studying Australian urban landscape I look at its biological and zoological information and explore Australia’s diverse and multiform human culture. I am interested in imagining possible histories and in bringing together unexpected conjunctions of ideas and images. I treat ceramics as a blank canvass upon which I can create pictures, working with unusual decorative techniques more often encountered outside of the familiar patch of the potter. A lot of my images arise in spontaneous ways – a sort of improvised “stream of (un)consciousness”. I am interested in skills and techniques – particularly the traditional ceramic arts and crafts of the Orient and Europe. I admire their ability to communicate. Their achievements in turn inform my own work. As an appreciator of creative skill, I try to create fine, resolved detail and striking images. I hope to intrigue and surprise the viewer who looks at my work more than once”. Stephen Bower’s ceramic works, like this splendid plate, highlights the fact that the decorative arts are an important and powerful expression of culture, especially in the context of historical events, intellectual, innovative and spiritual ideas, as well as social change.

The splendid book Stephen Bowers: Beyond Bravura, published by Wakefield Press, is also a celebration of this original Australian artist.

Stephen Bowers is represented by the Robin Gibson Gallery, Sydney

The Tyalgum Music Festival held in a beautiful and expansive environment, offers a great deal of enjoyment to be had by all who attend, September 8 – 10, 2017