Storm in a Teacup is a unique exhibition 24 July – 27 September at the Mornington Peninsula Regional Gallery (MPRG) in Victoria, Australia, illustrating how tea and its particular traditions have played such an important role in people’s everyday lives.

Anna Duchess of Bedford of Woburn Abbey, Lady of the Bedchamber to Queen Victoria in England during the 19th century, would be pleased to know about how much our modern society enjoys partaking of tea whether in a swanky tea room or a cuppa around the fire in winter.

The Duchess is attributed with starting the tradition of this convivial repast during the 1840’s. She truly deplored that ‘sinking feeling’ she got every afternoon about 4 pm following only a light lunch, with the festival of dinner retreating until 8pm at night.

Power and prosperity went hand in hand with tea for centuries. From being elitist to it being an elite brew everyone can enjoy today, we could say that tea has had an interesting journey. Charles Blackman, Feet beneath the table 1956, tempera and oil on composition board National Gallery of Victoria, Melbourne, Presented through the NGV Foundation by Barbara Blackman, Honorary Life Benefactor, 2005 © Charles Blackman. Licensed by Viscopy, 2015

By the time the first edition by English author Lewis Carroll’s extraordinary tale of Alice’s Adventures in Wonderland was published in 1865, taking tea had become the ‘rage’ thing to do especially with the burgeoning middle classes.

Australian artist Charles Blackman’s Feet Beneath the Table illustrates his idea of how Alice was forced to re-assess the world she already knew, just as Blackman had to come to terms with his own.

Alice was painted in 1956 when he was working at night in an East Melbourne Cafe and painting by day in his loft in Hawthorn.

Blackman believed that ‘… at the Cafe it always seemed to be tea-time’.

As he was the only chef, his own words tell the tale… 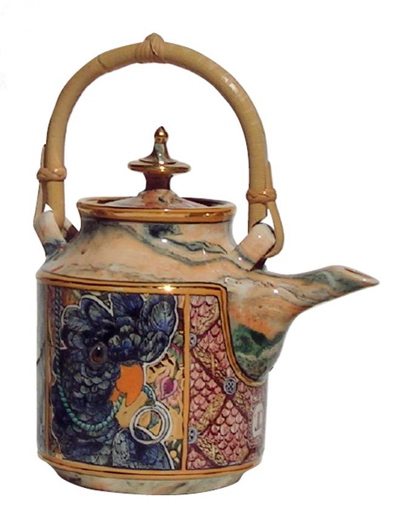 In the past many would have agreed with American novelist author Henry James (1843-1916) that ‘there are a few hours in life more agreeable than the hour dedicated to the ceremony known as afternoon tea’.

Many artists it seems have also been in pursuit of their passion for the best brew and were lured to put brush to canvas.

Australia’s Head on Portrait Prize Winner for 2015 Samantha Everton is one. Her images create visual narratives and are profoundly cross-cultural.

Her technical ability rewarded, her style has been described as ‘magic realism’.

They provide us with an image of their particular response to the emergence of tea as a beverage of renown.

Up until then the aristocracy considered ‘three meals a day’ only the preserve of those who worked for a living. As they needed to distinguish themselves as being  the elite of society, for centuries they stayed with eating only two main meals a day.

Tea was at first enjoyed only by a tiny stratum of society when it first arrived in Europe and England.

Tea with something sweet or savoury evolved at different times.

Gentry with country houses in 16th century England built banqueting houses or lodges on the roof where they had a ‘prospect’ over the countryside.

They would often enjoy a repast, including dessert when it was finally introduced by the French after sugar started its rise to popularity around the world. Longleat, a Stately Home in Wiltshire

Sir John Thynne of Longleat House in Wiltshire invited all his friends to enjoy the climb, the walk and view ‘after dinner’ which at that time was at the time the middle of the day.

This means an afternoon walk and additional repast of something sweet … and so the die was set.

The first meal the aristocracy enjoyed each day by the 17th century was the one that ‘broke your fast’ in the morning after a long night’s sleep. Drinking tea and coffee became fashionable during the 1670’s and 1680’s, brewed by the hostess herself.

In 1680 the Duchess of Lauderdale had an ‘Indian furnace for tea garnished with silver’ in her closet (a small room for relaxing off the bedroom) at Ham.

In William Congreve’s novel The Double Dealer of 1694 he describes the women as having repaired to the ‘end of the gallery – retired to their tea and scandal, according to their ‘ancient custom’ after dinner.

At this point two varieties dominated the early trade. Bohea, a black tea the choicest grade until the turn of the eighteenth century when Hyson or “Flourishing Spring“, became the luxury tea.

By the eighteenth century tea mania was entirely sweeping England, as it had earlier in France and Holland.

The expansion of the China Trade all over the world meant that special tea bowls became the rage and tea tables and tea trays and all sorts of lovely accroutrements for tea were invented. As the craze for all things oriental swept Europe and England, tea became part of the way of life; served in the Chinese manner accompanied by an assorted assemblage of tea wares, it gradually becoming the ‘British Institution’ of Taking Tea

Tea imports were an annual average of 240,000 pounds by 1708. Hyson was so favoured the British Tea Tax was levied at a higher rate for it than any other variety.

It was only during the second half of the 18th century the timing for tea began to rapidly change.

By that point European and English nobles and their families were hooked on sugar and they became enamoured with taking tea and cake as well.

Gradually dessert became something to take not only after dinner, but with a beverage at other times of the day as well. During the reign of Queen Victoria in England, three meals a day became the norm for many as the working day became well established during the Industrial Revolution and the idea of a weekend became a reality.

This is when the aristocracy stepped it up and decided to partake of four meals a day – trying hard for a long time to stay ahead of the game meaning that many ended up overweight and with gout.

There was breakfast, lunch and dinner as well as the taking of ‘tea’. This could be taken in the morning when morning calls took place, or in the afternoon when dinner moved in the 1840’s until much later in the evening.

As at this point fashionable concerns mostly filtered down from the top.

In both the colonies of New South Wales and Victoria afternoon tea parties were all about displaying your refinement of culture and taste.

An activity of genteel society, they reflected the colonists collective understanding of their own British identity and everyone took it up as a pastime. During the 20th century the taking of tea became a festival and my mother and I certainly inhabited Cahill’s Tea Rooms in Sydney Australia on a regular basis.

Today it is enjoyed all around the world.

The variety is astonishing and intriguing, much like this interesting collection of art at MPRG, which gives us a unique perspective on the journey. It is sure to be ‘everyone’s cup of tea’…

…I am certainly glad I was not born before tea.

Storm in a Teacup