At the heart of Streams and Mountains Without End is the enduring tension of an ancient duality; the Taoist animistic challenge to the hierarchical rigidity of Confucian order.

Streams and Mountains Without End is a display of a two-thousand-year longing for the peace to be found, away from society, in a place of retreat, deep in the natural world. The Confucian world was a stratified society that demanded high levels of achievement and deference to the authority of family and state. Taoism, on the other hand offered a life of the spirit that spoke of harmony with nature and the comforts of tranquility and meditation. This exhibition at the Metropolitan Museum of Art in New York displays seventy-five stunning works in many modes and material and is on show until January 6, 2018. They are painted, sculpted, fired, embroidered, engraved and printed. But, it is in the paintings that we find most tellingly and poetically, the values and aspirations of the artists and collectors.

Landscape paintings were not simply images of the natural world but rather images that explored the emotional, spiritual and psychic state of the artist and viewer.

The great scholar, Wen Fong, when writing about the painting ‘Old trees, level distance’ by artist Gu Xi (1000-1090 AD) spoke of it as being the “Landscape of Emotion”.

Away from the court and urban centers, the perspective of humankind’s place in the world changed.

In the first of the nine galleries dedicated to the exhibition at the Metropolitan, is a striking, large scale hanging scroll, over two metres high, that presents the proposition that humankind is a part but not the centre of the universe.

Tucked away in the midst of this dramatic exuberance is a terrace pavilion that almost seems like an incidental detail. On the terrace, two tranquil viewers sit unperturbed, deep in serene contemplation.

We can guess that their meditations are on the place of the individual in the cosmos and the delights of art and poetry, wine and good company. 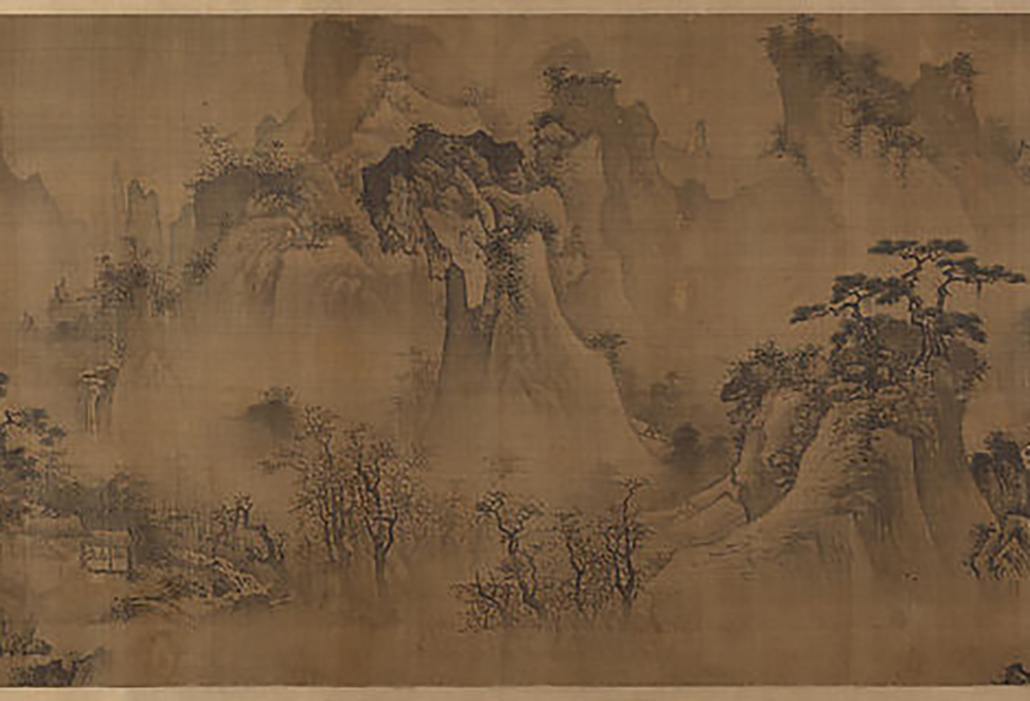 Another stand out is the fifteenth century eleven metres long hand scroll ‘Four Seasons’ by an unidentified painter. Originally viewed right to left in sections, unrolled on a table or desk, over time, almost cinematically, scene after scene. At the Metropolitan, this is shown fully extended.

In an extraordinary profusion of detail, it follows roads and paths, a year-long journey across a vast changing landscape, mountains, rivers, forests, bays, villages and farms through the four seasons; the buds of spring, the heat and open skies of summer, the mellow autumn, the chill snows of winter and then back to the spring. 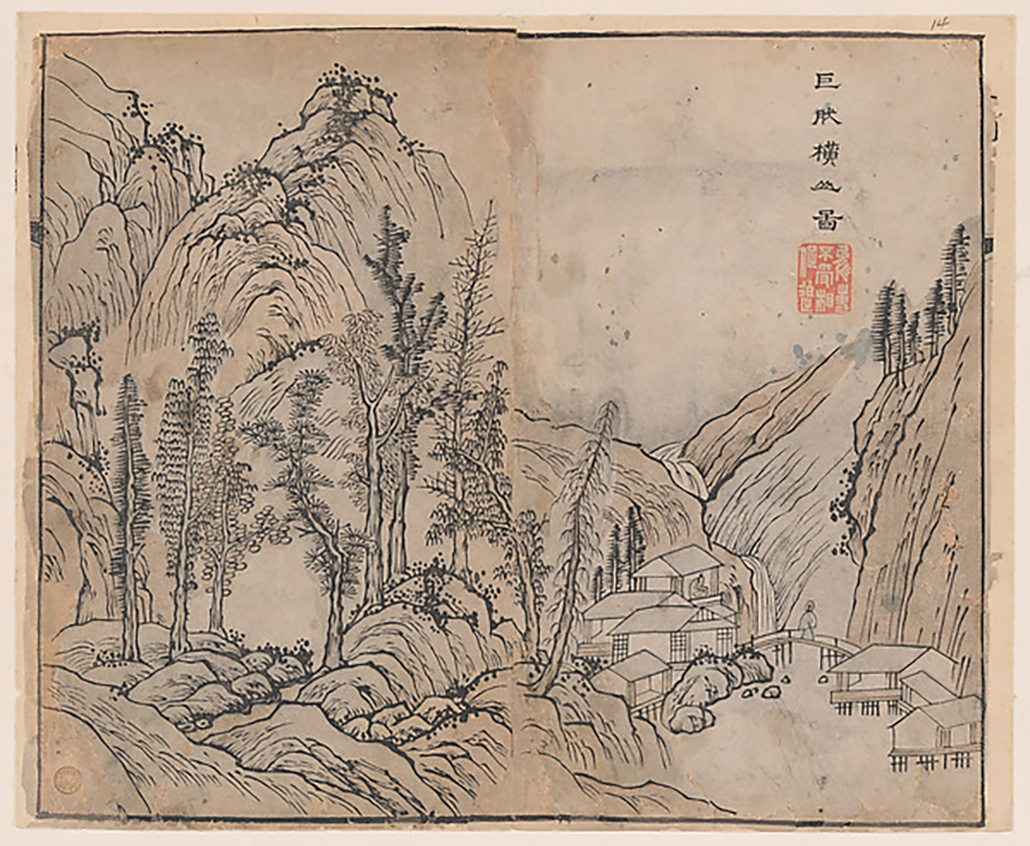 A seemingly modest series of works are the woodblock printed pages from ‘Mustard Seed Manual of Painting’ designed and printed by Wang Gai in 1679. The pages are basically illustrations from a “how to” book. 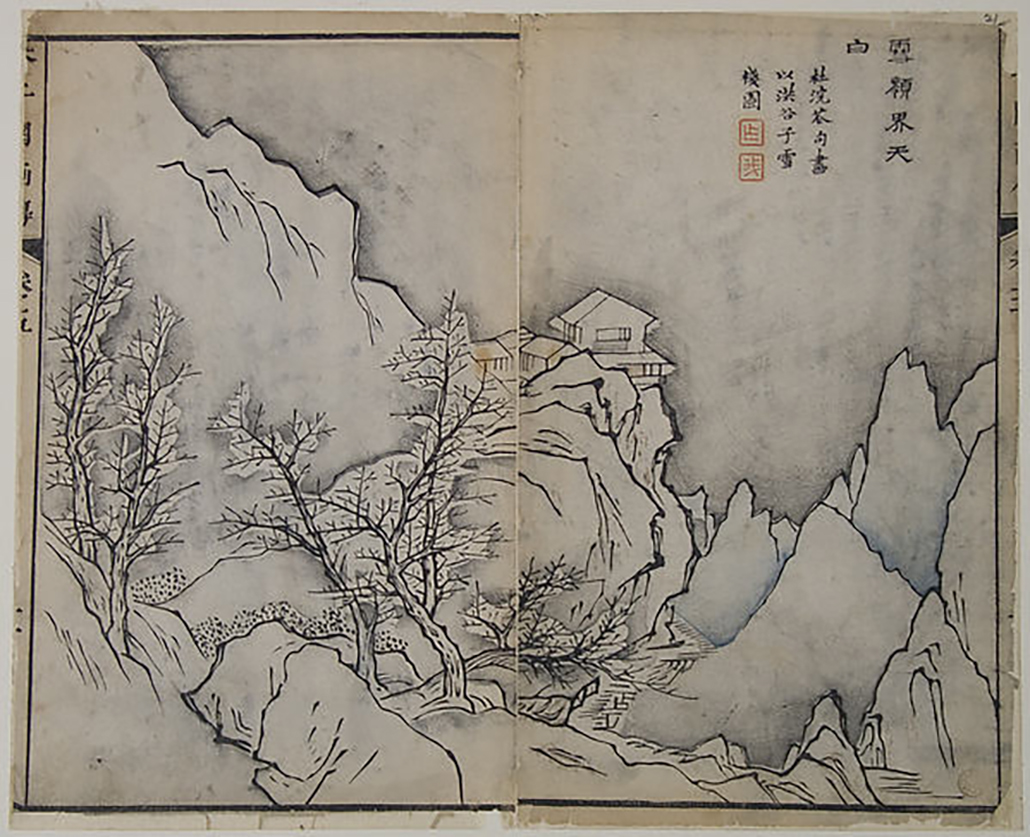 The manual is evidence of the freedom to both study and identify with the wealth of the artistic heritage and yet be confident of their individual place in that story going forward.

Poetry and calligraphy are like a heartbeat through the exhibition. Poets and painters were allied, the themes and moods of their work was complementary, the calligraphy of the poetry often a dynamic, visual element of the painting.

In the Southern Sung Dynasty, it was a common image in paintings and poems to see painters and poets spending their days together, in a secluded setting around the West Lake, creating and exchanging their works. 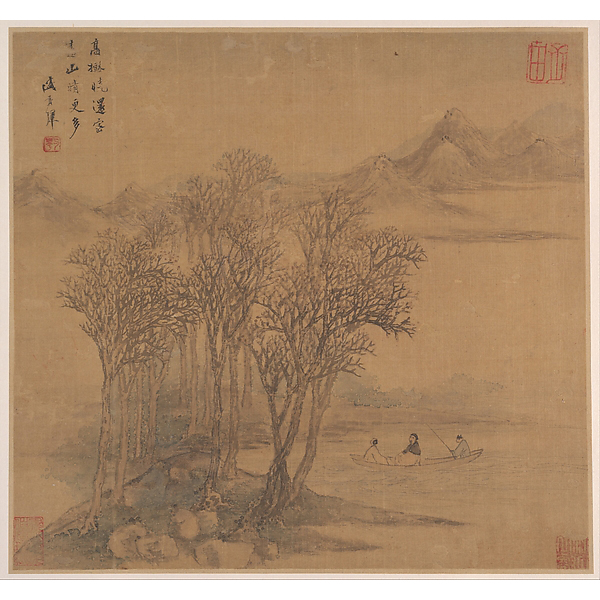 the Ming Dynasty artist, Shang Maoye, painted ‘Landscapes after Tang Dynasty Poems’. It is a set of album leaves in ink and colour on silk. They are intimate works for individual reading and viewing, the poetry and painted image, an integrated harmony. 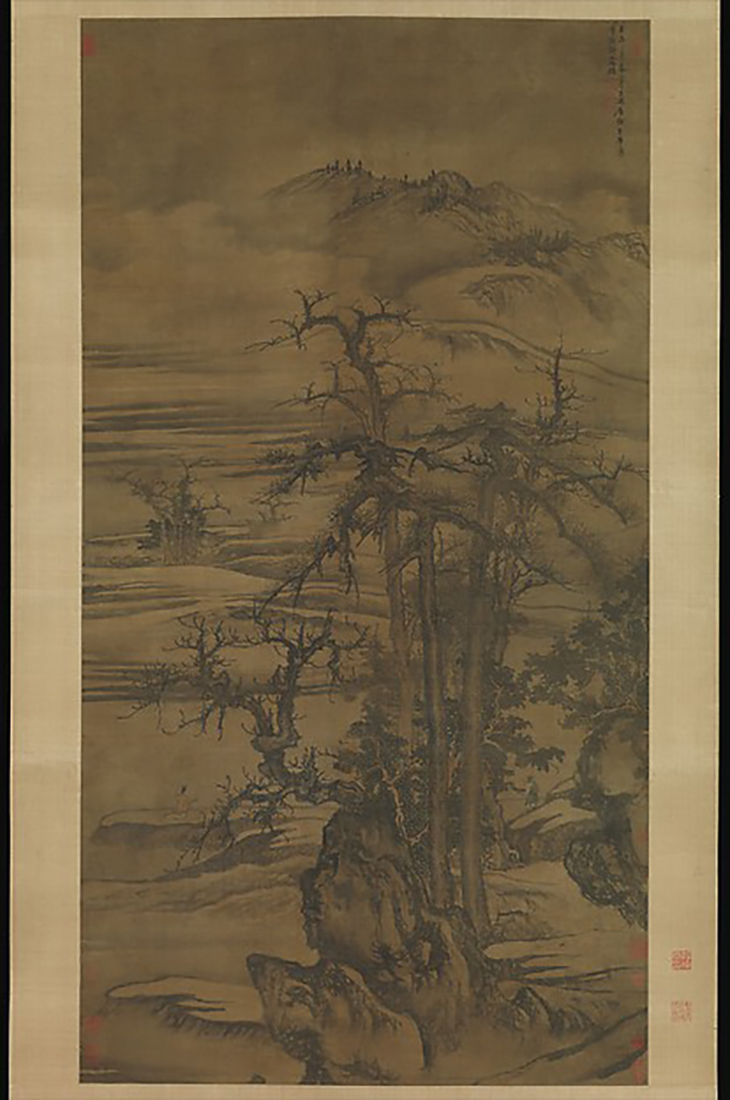 In the Yuang Dynasty, the painter Tang Di, painted a brooding landscape of cloud and mist enveloped mountains integrating the lines of Tang Dynasty poet Wang Wei (AD 699-759); “I walk to where the water ends and sit and watch as clouds rise.” The mood of the poet and the painter, one of spiritual struggle and the search for renewal.

‘The Road to Shu’ by eighteenth century Gu Fuzhen is an homage to the poet Li Bo and the struggles he had to endure to return to the land of his birth in the remote and distant South West of China.

Possibly the greatest Chinese poet of all time was Du Fu. His humility and tender humanity expressed in poems over a long and tumultuous life are as true and relevant to us now as they were over 1,300 years ago. 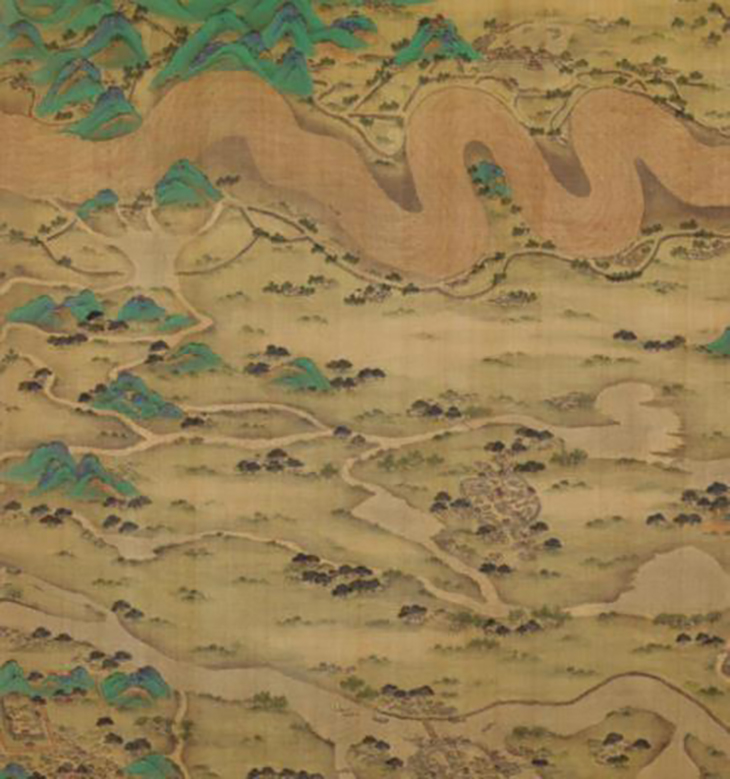 To celebrate Du Fu the Sung Dynasty painter Sima Huai painted the hand-scroll ‘Two Landscapes’. It is a breathtakingly beautiful river landscape of gentle serenity and exquisite modesty, the calligraphy of the poetry dispersed and integrated with the soft focused river banks.

The dynamic foundation of Chinese landscape painting is the tension created by conflicting impulses and choices; individualism versus society, animism versus fatalism, freedom of expression or a highly self-conscious body of tradition, physical world versus spiritual world. 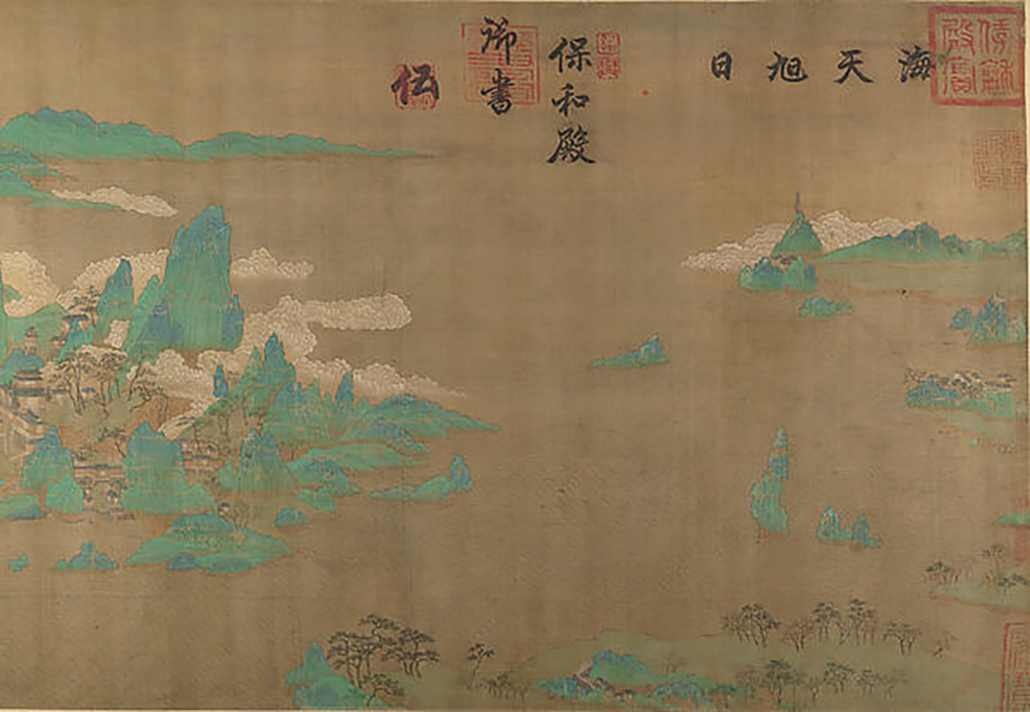 It is the resolution and balance of the many possible decisions that creates the life and pulse of Chinese landscape paintings. 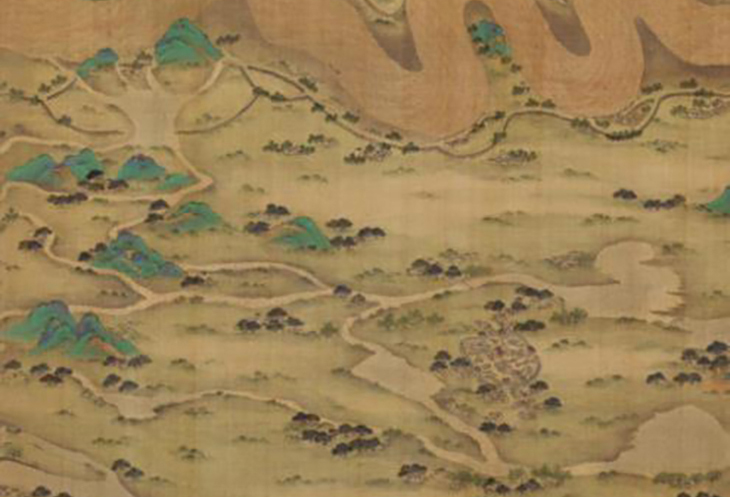 Streams and Mountains Without End