About a thousand years ago, Chinese landscape painter Guo Xi posed a question, “In what does a gentleman’s love of landscape consist?”

Landscape traditions in China are all about the rhythm of nature refreshing the heart. Currently at The Met Fifth Avenue in New York, they are showcasing a wonderful exhibition, Streams and Mountains without End: Landscape Traditions of China, which is on show until January 6, 2019.

Gardens are mentioned in Chinese poems from the eleventh century when ‘… every Emperor and Ruler must, upon returning from his official duties and audience, have a landscaped garden in which to stroll, look around and find rest in his heart.’

This exhibition consisting of some 120 Chinese landscape paintings in three rotations, offering the viewer insights into the traditions and types of landscape, most of which are not obvious at first glance. It may look like a simple mountain dwelling, but on closer inspection it turns out to belong to the painter’s friend, and is all about offering a wish for his happy retirement. Similarly, what seems at first to be a simple study in dry brushwork turns out to be homage to an old master; an expression of reverence for what has come before. This enables the viewer to observe the many changes of nature through painterly scenes made to last a thousand years.

Drawn primarily from The Met’s holdings and supplemented by a dozen private loans, the display is augmented by a marvellous display of decorative art objects with landscape themes. 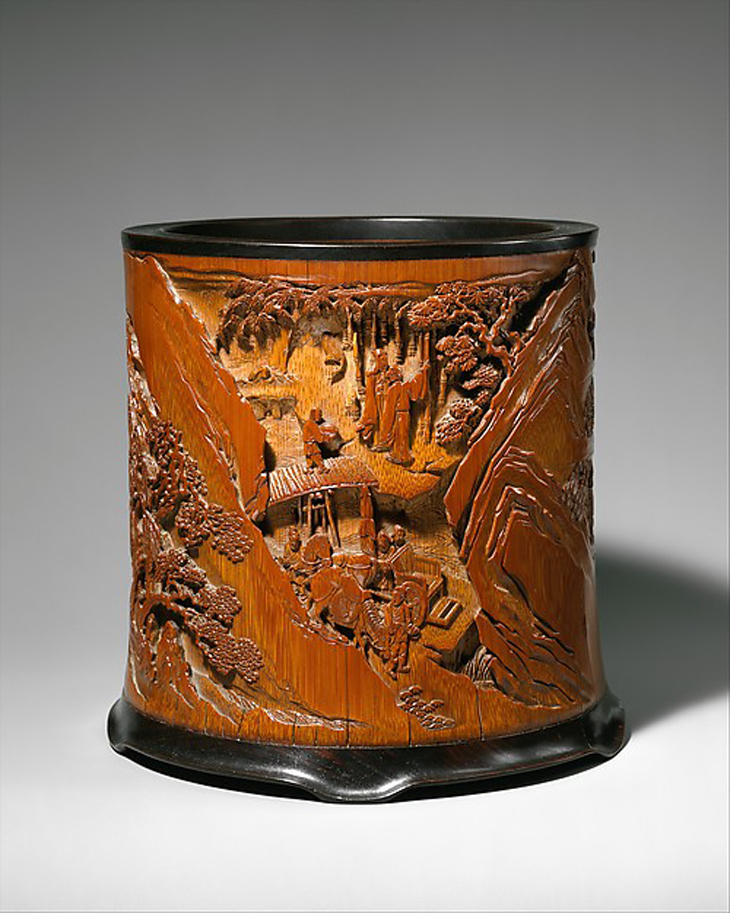 There is a brush holder illustrating scenes from the “Ode to the Pavilion of the Inebriated Old Man” by Ouyang Xiu (1007–1072) who having been demoted in 1045 to the remote Anhui Province, took solace in wine and the natural world.

‘One can create something that will last for a thousand years, but one cannot know who will be living in a hundred years it is sufficient to create a spot for pleasure and ease, which enveloped the dwelling with harmonious stillness’… said seventeenth century Chinese writer Ji Cheng in his Yuan Yeh (Garden Tempering 634). The pathway was meant to lead you there. Cheng tells us to ‘plan the walks and pathways ’to ‘yield to the enchantment of the flowers and willows’.

Superb objects compliment hanging scrolls with paintings on silk that reveal mythical realms. They include a superb scene created by laboriously weaving individual threads of different-coloured silk which was hand painted after weaving to speed up the process.

Another landscape scene is carved into a glorious hunk of the gemstone the Egyptians also admired, Lapis Lazuli, while yet others are recorded carved in Nephrite (Jade), limestone, or as a scholar’s rock or painted on bottles and vases of porcelain with overglaze enamels. The Chinese garden attempted to recreate nature’s poetic wonders and create an outward expression of a man’s inner strength. It is highly contradictory because to be at one with the ebb and flow of the natural order of things, everything is in constant flux and contradiction.

So to go forward, you must step back, to gain you have to let go, and to win you must lose…Its an introspective philosophy, one that had a ‘belief in, and reliance on, human intuition’. The Vase with “One Hundred Deer” motif a unique work, depicting the creatures that the Chinese considered ‘supernatural creatures, has a second layer of meaning.

One Hundred Deer is a homonym; a word pronounced the same as another but differing in meaning, whether spelled the same way or not, as heir and air.

In this instance it represents the economic, cultural, and social benefits that could accrue during the course of an career working as a court official. It was made at Jingdezhen, where some sixty kilns were working for the court during the Ming Period (1368 – 1644).

The production and arrival of Ming ceramic wares of such unsurpassed, and in some cases, breathtaking brilliance in Europe would inspire ceramic design for centuries but that story is for another time. Chinese culture has two main indigenous philosophies, Confucianism or Daoism and so has the Chinese garden. This is reflected in the importance placed on its siting, which is determined by the ancient Geomantic art of “Feng Sui’ (Air and Water).

The basic principle is that streams of currents of vital spirit or cosmic breath run through the earth according to its topography. These impose their will and influence on the course of individuals and their descendants, dependent upon the siting of their houses, gardens and graves and their relationship to the landscape in which they live.

From the fifth century before the western Christ event, these philosophies ran conjointly, complementing each other. The impetus of Confucius theory concentrated on man’s relationship to man. Daoism sought to discover how man could best fit into the great universe in which he lived.

The Dao being the totality of all things, past, present and future in a constant state of transformation through time.

The legendary gardens of the Yuan Ming Yuan (1709-1860) covered 350 hectares and were at the pinnacle point in the two thousand year tradition of Chinese high art gardening and culture and in many ways represented both.

Yuan and Ming signified the highest standards of an enlightened emperor.

The words Yuan and Ming were of sacred importance in the days when Confucianism became a ruling ideology.

The Emperor and his rule was likened to being the sky, the earth, the sun and the moon; determined to do good things, to understand his people and the challenges they face.

Yuan was about keeping oneself in the best morally mental condition while Ming meant ruling the country with wisdom, benevolence and courage. The colour palette of the enamel decoration known as cloisonné, usually features vibrant turquoises and blues. It is well suited to depicting the magical landscape of Daoist immortals; a supernatural being, attended by servants, arrives at a pavilion on a billowing cloud.

For the Daoist gardener an aged and gnarled pine tree was one of the most desired of elements aesthetically. Trees were admired for form, shape and colour… the colour green, the luxuriance of the foliage, formation of its crown, thickness and height of the trunks and where they were placed on the top of a slope or hill, or in a valley… you could be part of its change from sapling to mature tree, and from strength to age. There were bridges of more than a hundred different designs, which traversed these bounteous places of beauty and tranquillity in the earthly world, while representing the dreams of a land of ‘quiet old days’. This other world dimension, so integral to historic Chinese landscapes, have come from being part of a mythological exploration of immortality. Streams and Mountains without End: Landscape Traditions of China

Lurid Beauty at NGV Australia may not be everyone’s ‘cup of tea’ but will provide a centre of focus for a healthy creative exchange about what art is, or is not