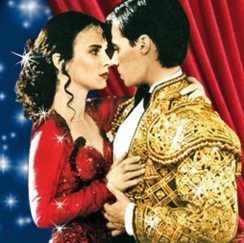 Back in 1984 Baz Luhrmann, with a group of fellow NIDA (National Institute of Dramatic Art) students devised the premise for what would become the 1992 world wide smash hit film “Strictly Ballroom”.

From here the seeds, or should I say the sequins would be sown to create Strictly Ballroom The Musical, an inspiring story of Scott Hastings, a championship ballroom dancer who defies all the rules to follow his heart.

Premiering at The Sydney Lyric Theatre on Saturday April 12th 2014, this Global Creatures production promises to be spectacular. Costume and set design by the Academy Award winning Catherine Martin, co-written by Luhrmann and Craig Pearce, choreographed by John O’Connell with original score and arrangements by Elliot Wheeler, I have no doubt that the audience will be swept away into the lavish world of professional ballroom dancing, sequins, heartbreak and finally love when this exciting new theatre production is unveiled. “Strictly Ballroom has always been incredibly personal to me” says Baz Lurhmann, the genesis drawn from my childhood experience.

“The world of ballroom dancing has these very strict rules about what is good and bad dance.

The metaphor that we began with was about creative oppression and freedom; that artistic endeavour and the rule books don’t really mix”. I think that you can see this in all of Baz Luhrmann’s work, not just “Strictly Ballroom”.

Personally I am a huge Baz fan, I feel the core of his stories are the pursuit of happiness and love.

He is a modern day Ziegfeld, wanting to whisk the audience away into another dimension, his dimension, and I was lucky enough to witness this first hand. 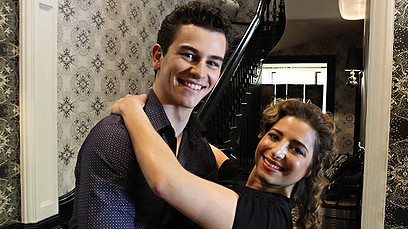 All new Scott and Fran

Taking place in the Rehearsal Room at the Carriage Works in Sydney’s Redfern, media were invited to take a sneak peek into what I’m sure, will be a brilliant stage production.

First it was Drew Forsythe as Doug Hastings, Scott’s long suffering father performing a heartbreaking solo as a man broken by his love of dance and the rules of establishment.

Next a romantic duet from Scott and Fran, followed by the hot blooded Pasadoble, led by the fabulous Fernando Mira playing Rico, Fran’s father. Last but not least, a beautiful love song from Fran and Scott.

Even in rehearsal clothes (no costumes), there was that excitement in the air and I felt privileged to have a birds eye view in such an intimate space.

There is a great chemistry between the two leads and an effervescent energy within the whole cast, which I can’t wait to see in full production.

Then there is songs by Dianne Warren, famous for such classics as “Because You Loved Me” sung by Celine Dion and the Aerosmith hit, “I Don’t Want To Miss A Thing” from the 1998 movie “Armageddon”.

Baz’s enthusiasm is infectious and his perfectionism notorious, but it’s easy to see how he gets the best from his cast and crew. His passion is almost palpable!

Can’t imagine anything less than 110% from this stage spectacular.

Suddenly Baz spies his wife and partner in crime, Catherine Martin, who has snuck into the rehearsal room. “Cut” shouts Martin, and it’s back to the real world.

Thanks to the genius of Baz Luhrmann, Catherine Martin and their inimitable team, there will always be that great escape, be it in film or live theatre.

As the shows motto tells us “a life lived in fear is a life half lived”.

I imagine Baz has known fear, but never a life half lived!

The filming of the second series of Sherlock has just been completed in England. Re-invented by Steven Moffat and Mark Gattis of Dr Who fame when traveling, most appropriately on a train, Holmes and Watson were resurrected as living, breathing, modern men just as they were originally. For fans of the shrewd, sexy savvy reincarnation of one of fiction’s most enduring characters this is the good news they have been waiting to hear.