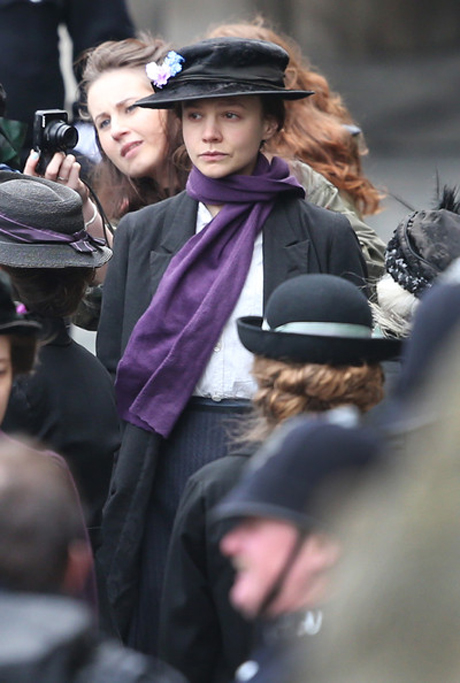 Actor Carey Mulligan on the set of Suffragette, featuring as Maud Watts, a foot soldier for the Suffragette cause.

Believing a woman’s place is in the house, the senate and the oval office in America, or in the Prime Minister’s chair in Australia and England is the idea behind the start of a political movement that began during the mid-nineteenth century.

It finally led to many women around the world gaining the right to vote, which for many has really only been a beginning.

“We break windows, we bomb things, because war is the only thing men listen to”…

“… what are you going to do lock us all up…we are in every home, we’re half the human race, you can’t stop us all” states the feisty Maud Watts (Carey Mulligan) to Inspector Arthur Steed (Brendan Gleeson) in a graphic story about equal opportunity foot soldiers on the ground in London.

The movie successfully made the women’s plight and struggle feel so very real, it was really riveting for the first night mixed audience at the Palace Cinema Como in Melbourne. It was no surprise to me they burst into loud and spontaneous applause when it ended.

As the film credits roll you feel at first cheated because you want the story to go on, which is entirely the point this brilliant director is making. Suffragette is no pretty period drama, rather a bleakly coloured expose wonderfully acted by its fine ensemble cast.

Superbly directed by Sarah Gavron, with a brilliant script by Abi Morgan, Suffragette offers us an insightful glimpse into the thoughts of a group of women in East London who are fighting to gain the vote for women as a first step in an ongoing campaign.

So don’t be fooled by the ‘historic costume’ or period aspects of this movie. The Director of Suffragette Sarah Gavron is making her point the woman’s fight for equality is a struggle that is both contemporary and ongoing.

It highlights the story of Maud Watts one working class married woman and her personal inner conflict to balance her personal life with her husband Sonny (Ben Wishaw), her little boy George (Adam Michael Dodd) with her job and her newly found political beliefs. Most women in the British colonies of New Zealand and Australia have already been given the vote a few years before, which must have been hard for their British counterparts to deal with.

Maud works at the local laundrette where she was co-incidentally born to a mother who died when she was four and a father she has never known. Her politically active friend Violet (Anne-Marie Duff) is helping Maud to grow her belief that women should have equal rights to do more than just ‘as they are told’ by men.

Having grown up sexually abused by her truly awful boss who mistreats the women he employs at the Laundrette where she has been working since she was seven years of age, Maud Watts has become lulled into submission.

It becomes clear that Sonny one of her fellow workers and her husband has rescued her, because after she married him her boss Norman Taylor (Geoff Bell) moved on.

Now he’s abusing her friend Violet’s teenage daughter and there is nothing anyone can do to stop him.

Maud has been aware for some time Violet and some of the women she knows might be involved with the Suffragette movement, but she has never really thought about her own views. She is so used to doing as she is told by the men in her life. Maud Watts (Carey Mulligan) being taken away by the old Bill… Suffragette, 2015

Invited to go along to a rally to listen to speakers about the movement, she unexpectedly becomes one of the women beaten with wooden truncheons as the police arrive and turns the peaceful scene into a bloody battleground.

Arrested, carted off to prison for two days and shamed socially in the neighbourhood, this event will have dreadful consequences, which Maud couldn’t have possibly foreseen when she agreed to go along and listen to the arguments.

Having been locked out of her home by Sonny, Violet helps her find a place to live. Maud manages to keep her spirits up by taking her son George out of school and endeavouring to explain why she’s not at home any more, a concept he cannot begin to understand. Suddenly helping out Violet, who cannot give her testament to a government inquiry because she has been battered black and blue by her husband, will however make the struggle real and very active for Maud.

She may have been hesitant at first but when she is invited to express her own views by the Chancellor of the Exchequer David Lloyd George (Adrian Schiller) at Parliament house, for Maud it is a defining moment one that will change her life.

Also inspired by a speech delivered to a crowd of adoring women by the movement’s famous political activist living legend movement leader Emmeline Pankhurst (Meryl Streep), this is the point where Maud’s political awakening really begins.

This is when she embraces the idea that it will only be deeds not words that will finally get the job done. She and her small band of women led by Edith Ellyn (Helena Bonham Carter) help Pankhurst to flee from the police as they arrive.

Introduced to the great lady herself who urges Maud never to give up the fight she becomes very involved in increasing activities bombing letterboxes and setting fire to a government minister’s house.

She is again arrested, despite there being no evidence.

Believing the forces of law and order have brought her down, Inspector Steed doesn’t know that he and the police have only strengthened her inner resolve to continue the fight.

Violently force-fed after starving for five days, Maud is released to fight another day. Sleeping rough in a church at night is not a pretty existence.

This is when Sonny who stopped her seeing her darling son gives him up for adoption. As the tiny innocent pawn in the game of life is wrenched away, she begs him not to forget her and to come and find her when he grows up.

Carey Mulligan is very convincing in her transformation from an innocent bystander to a riveting radical starving herself in prison to the shocked and distressed woman who watches one of her friends die violently.

Bonham Carter gives a stunningly subtle performance as the local pharmacist Edith Ellyn who organizes the women in East London. She is a woman ‘educated and without scruples’ who is living by the code its ‘better to be a rebel than a slave’.

Her husband also a chemist, having been her ally for most of her activities, in the end locks her up when she is about to leave on the dangerous planned campaign that goes wrong at Ascot racecourse, because he simply wants to save the life of the woman he loves. Suffragette‘s storyline is created around a real life event, the death of one of their active foot soldiers Emily Wilding Davison (1872-1913).

Emily (Natalie Press) threw herself under the King’s horse in a race at Ascot on 8th June, 2013 while the King watched on, and the world’s camera’s rolled.

Maud is there to witness the horror for herself, as indeed is the Inspector Steed, who cannot despite himself and his job admire his formidable adversary

After all Maud had written him such a polite, honest and respectul letter about why she would not become a police informant, when he picked her out of the line up as the movement’s weakest link. Romola Gai gives an understated performance of great sensitivity as the wealthy undercover informant to the movement Alice Haughton, wife of Benedict Haughton (Samuel West) who has been charged with bringing the Suffragette’s down. It is to Alice that Maud finally turns to in order to save Violet’s daughter Grace (Maggie Miller), asking her to take her on as a laundry maid in her house.

Certainly many of the points made in the real statements to parliament, about “equal pay, appalling working conditions, sexual violence and abuse at work and at home, parental rights, custodial rights, property rights” are still in play in many parts of the world today.

Emmeline Pankhurst founded the Women’s Social and Political Union in 1903 to win the right to vote for British women.

Their radical campaign while sending shock waves throughout the polite society of the Edwardian drawing room provoked civil disobedience on a massive scale. It made many people take on board what real democracy and freedom is meant to be all about.

The timeline at the end of the movie revealing which countries and the dates women gained the vote proved particularly poignant, with Saudi Arabia bringing up the rear at December 2015. This certainly hit home with our audience who let out an audible sigh. “If you want me to respect the law, make the law respectable,” is a phrase that continued to ring in my ears long after we had left the theatre

Designed and built by Joseph Paxton in London’s Hyde Park The Crystal Palace was a gigantic showcase for splendid examples of British ingenuity and design revealed at the Great Exhibition of 1851 organized by the clever consort of Queen Victoria, Prince Albert. It was removed in 1854 to Sydenham and…