A landmark exhibition Sultans of Deccan India, 1500-1700: Opulence and Fantasy to be on show at The Metropolitan Museum of Art, New York, from April 20 – July 26, 2015 reveals that its Deccan culture was marked by its ingenuity and industriousness.

The Deccan plateau begins where North and South India meet and encompasses most of the southern part of the country.

As Europe entered the enlightenment period the kingdom of Bijapur on the Deccan plateau was further enriched by an increased foreign demand for its precious gemstones.

India, just the name allows us to imagine exotic connotations of the land where the legendary Kohinoor diamond was found.

Visitors and invaders both were drawn to the material splendour the Sultans surrounded themselves with, charmed and captivated by their court’s visual sumptuousness.

The Met will bring together some 200 works, gleaned from major international, private and royal collections, including a dazzling display of diamonds, some of the largest yet found, originating in the great mines of the Deccan, including the ‘Idol’s Eye’ and “Agra” diamonds.

Given as diplomatic gifts or traded by merchants, India’s diamonds discovered during antiquity reached an appreciative audience among European royalty. Spectacular painted and printed textiles (kalamkaris), richly painted with motifs will also be shown alongside sumptuous royal objects made of inlaid and gilded metal, carved wood, as well as stone architectural elements.

Many of the textiles known as ‘Indiennes’ were shipped around the world from India during the so-called ‘golden age’ of the Deccan Plateau where its people enjoyed a rich heritage in art and language.

The latter was developed as an independent spoken and literary language, which distinguished it from the language of Northern India.

The Deccan people during the 16th and 17th centuries were already astonishingly wealthy.

Under the rule of Sultan Ibrahim Adil Shah II (1580–1627) the spirit of Deccani art was refined as Indian and Persian artists worked side-by-side.

Cargo brought into the port of the Marseilles was shipped by the Compagnie des Indes Orientales. The dazzling patterns and striking colours of the textiles captured the imagination and their reputation for being colourfast made them appear miraculous sparking a whole new trade for France. The cottons were painted in motifs gleaned from many exotic cultures including eastern Africa, Europe, Safavid Persia and Ottoman Turkey.

The imported cottons were extremely expensive, and became enormously popular in Paris at the court of King Louis XIV (1838-1715), where they were turned into all manner of fashionable apparel including the theatre. The fabric’s manufacture requiring three elements.

A base cloth of  high quality cotton with over 150 threads per square inch to produce graceful block based prints, which were melange of naivete and sophistication.

In France the cottons were decorated with motifs and dyed with colours that reflected the flora of the regions in which they were manufactured.

In England in 1676 William Sherwin was granted a patent for fourteen years for a new way of printing broad calicoe in the only true way of East India printing and stayning such kind of goods. Inscription from the Rajah quilt, including dried blood from the prisoner’s pricked fingers…. detail Rajah Quilt, 1841, British makers on board the Rajah en-route to Hobart. Collection of the National Gallery of Australia. Gift of Les Hollings and the Australian Textiles Fund 1989

During William and Mary’s reign this trade increased enormously, and Indian cottons or calico called after Calicut on the Malabar coast where the textiles were collected for shipping began to arrive.

They were of various qualities, woven with coloured stripes or checks or painted and printed.

In Australia ‘Indiennes’ were incorporated into The Rajah Quilt made in 1841 aboard ship by a group of ladies during their voyage to van Dieman’s Land as convicts.

Containing 2815 pieces, it combined contemporary textile technology with patchwork pieces provided by the British Ladies Society for the Reformation of Female prisoners.

Many of these remnants would have been cut from cast off worn clothing or bed hangings discarded by women in society. The siting of the Deccan Plateau was important, at the heart of the peninsula with access to both the Arabian Sea and Bay of Bengal it became a focus of immigration for literary and religious figures who integrated with others of varied origins.

The portion of the plateau lying between the Arabian Sea and the Bay of Bengal-and including a substantial area to the north of the Vindhya Range, which has popularly been regarded as the divide between northern India and the Deccan.

This area has a history of invasion, subjugated by the Khaljis and Tughluqs, the first Muslim rulers of Delhi.

They were followed two and a half centuries later by the Mughal Empire and in the eighteenth century by the Maratha culture. Attributed to the Bombay painter (probably named Abdul Hamid Naqqash), here we have a detail of a historic miniature image of Sultan Ali ‘Adil Shah II Shooting an Arrow at a Tiger (detail). Bijapur, ca. 1660. Ali Adil Shah II was a young man when he succeeded to the throne of Bijapur, reigning 1656-1672, while dealing with the ambitions of men from the Mughals and Marathas, opposing groups of peoples both of whom sought control.

His rule was invigorated by its other cultural influences.

Miniature painting was an art form that attracted patronage in Deccan court history. The colours he is wearing are important – gold for kingship and lapis lazuli blue, the glorious pigment used in Mesopotamia, Egypt and in the Indus valley from about 2000 BC.

Here on his headpiece and on his bow its use is symbolic and significant.

Produced in a style characterised by its quality, lyricism, romanticism and accentuated forms and colours, the Sultan is loosing his arrow towards a tiger crouching in front of him on the rocky hillside.

He has a halo around his head, looking for the entire world like a divine human being, one whose people rely on his skills as a hunter, leader and ruler to conquer all foes and enemies. It reflects wisdom and protection, two important characteristics for a powerful ruler to display.

As it is on his head it is symbolically guiding his power of judgment and decision to eliminate his foe, and on his bow it is guiding his arrow to reach its mark so he can protect his people. Despite the frustration of ruling a doomed state, Sultan Ali is today considered an important and inventive patron”* .

Developments in Persian and Deccan literature and fine arts produced under his and the Deccan courts patronage are now part of its considerable legacy. 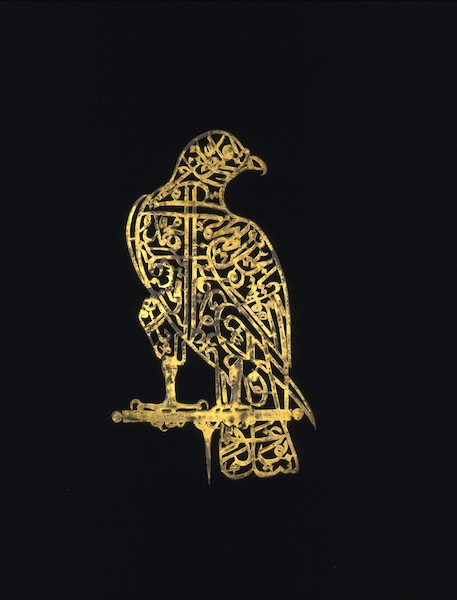 Visitors to the exhibition at The Met will enjoy encountering poetic lyricism in painting; lively creations in metalwork; and wonderful cloth produced as part of a distinguished tradition in textile production, which was the greatest art of the people of the Deccan plateau, south-central India.

Showcasing the character of classical Deccan art in various media the exhibition will have many related special events. Education programs will be made possible by the E. Rhodes and Leona B. Carpenter Foundation, the Doris Duke Foundation for Islamic Art, and the Deccan Heritage Foundation.

Also, a two-day symposium will bring together scholars discussing the paintings, arms, and textiles of the Deccan and specialists in the field of heritage preservation, made possible by H.H. Sheikh Hamad bin Abdullah Al-Thani.

Essays by some of the field’s leading scholars offer perspectives on the cycles of victory and conquest as dynasties competed with one another.

They are featured in a book produced for the show by Navina Najat Haidar is curator of Islamic art at The Metropolitan Museum of Art.

Marika Sardar is associate curator at the San Diego Museum of Art and published by Yale University Press. It will be available for purchase in the Museum’s bookshop.

The catalogue is made possible by The Andrew W. Mellon Foundation, the E. Rhodes and Leona B. Carpenter Foundation, the Doris Duke Fund for Publications, and Shubha and Prahlad Bubbar. A related publication, Sultans of the South: Art of India’s Deccan Courts, 1323–1687 (edited Navina Najat Haidar and Marika Sardar, $50), includes essays from 2008 symposium The Art of India’s Deccan Sultans, made possible by The Hagop Kevorkian Fund.

The joys of reading blurbs, perusing beautiful illustrations and photographs and finding forgotten gems awaits on a visit to the Constant Reader Bookshop Sydney