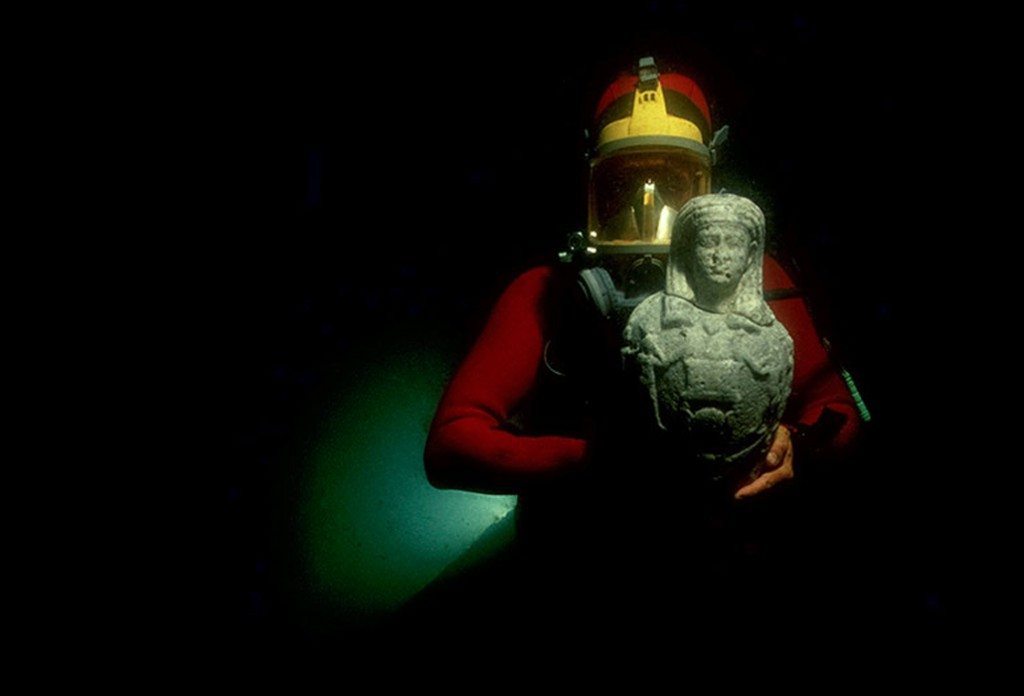 In 1999, a French mathematician named Franck Goddio decided to, in his own words, ‘take some time out and do something worthwhile with his time’. Cut to 2016 and the Director of The British Museum announces that Goddio will be giving a small talk, and through a buzz of excitement I notice Goddio out the corner of my eye.

He moves through the crowd of journalists to a microphone, which has been placed in front of two colossal stone figures, splendid in Egyptian regalia. These sublime figures represent a King and Queen of the Ptolemaic dynasty as Egyptian deities on earth. And it is thanks to the fact Franck Goddio decided to take some time out that they stand here now.

When people say they want to do something worthwhile with their time, leading a twenty-year archaeological expedition and discovering the remains of one of the ancient worlds lost cities does not spring to mind. But that is exactly what Franck Goddio set out to do and achieved. And he stands here now at The British Museum having co-curated an exhibition of his discoveries entitled Sunken cities: Egypt’s lost worlds.

Leading a team of experts and using the latest in available technology, Goddio went in search of the lost Egyptian cities of Thonis and Heracleion. Cities mentioned in ancient texts with only vague clues as to their whereabouts. It was beneath the vast waters of Abukir Bay at the edge of the north-western Nile Delta that the now pioneer of modern maritime archaeology Goddio and his team discovered the remains of a temple, leading them to eventually discover that Thonis and Heracleion were one and the same city; Thonis to the Egyptians and Heracleion to the Greeks.

During the speeches introducing the exhibit, special mention is made of BP, who sponsored the exhibition. Just outside the Sainsbury Gallery where the exhibition is taking place, Greenpeace activists protest against this sponsorship, a comment on the the irony of sunken cities and climate change. It was, however, unstable land, which eventually liquefied that claimed Thonis Heracleion. The city would have been abandoned and eventually sunk beneath the waves lying at the bottom of the sea, waiting for approximately 1,300 years for Franck Goddio to take some time out.

His discovery and the current exhibition opens our eyes to an ancient Egypt that was trading and fusing styles, culture and religion with another great ancient civilization; the Greeks.

The artifacts found at Thonis Heracleion all point to a city that was a centre for trading and religion. And a city where two different cultures lived side by side, not always without conflict, but also sharing goods and ideas. The collaboration between the ancient Greeks and Egyptians can be seen around 664 BC under the pharaohs of the 26th dynasty known as the Sais Dynasty. Egypt, which had previously been closed off to outside countries, began to open its doors to the Mediterranean.

Thonis Heracleion was no doubt built as a result of this increase in networking. Harbour installations and no fewer than 69 ships have been discovered in the site. The exhibition has fantastically preserved examples of pottery, vessels which would have been imported from the Mediterranean containing olive oil, perfume and wine

Exquisite jewellery with Greek imagery shows a period when the Greeks started travelling to Egypt, some for trade, others drafted in to the army and some Greek aristocrats bringing diplomatic gifts. Around 600 BC the Athenian statesman Solon described in a poem how he had stayed, ‘at the Nile’s mouth, by Canopus shore’.

Here we have an example of some of the first Greek traders who were allowed to settle at the growing international sea port of Egypt, Thonis Heracleion.

Although there were restrictions and taxes on the movement of traders and goods beyond the ports further down the Nile, the ports were accommodating and open to the Greek visitors. Even to the extent that temples were built as places of worship for the Greek Gods next to the Egyptian temples.

One example of this was the temple of Apollo at Naukratis, the sister port of Thonis Heracleion. Built in the Greek style around 560 BC, only fragments of it’s limestone columns and decorative features can be found some which are on display at Sunken Cities, they give the viewer an idea what the temples at Thonis Heracleion would have looked like. This relationship between Greek and Egyptian civilisations peaked when Alexander the Great conquered Egypt in 332 BC.

Unlike the Persians who had previously ruled Egypt, Alexander’s desire to be accepted by the locals can be seen in his restoration of old Egyptian religious practices such as animal sacrifice, rebuilding of temples, following the traditional duties of the Pharaoh, and reinstating the Egyptian priests. Even after Alexander’s death, the Greek-Macedonian dynasty, which was founded by his generals and ruled Egypt for the next 300 years, followed Alexander’s example. The Ptolemies, as they were known, sought the support of the priests to legitimise their rule.

They continued to renovate temples and build new ones, practising Egyptian religion mixed with Greek influence and using propaganda such as representing their Queens as Goddesses to enthrall their subjects.

The exhibition has two fascinating examples of this type of propaganda. One statue is of the Ptolemaic Queen, Arsinoe II 300s BC. Here she is represented as the Greek Goddess Aphrodite who was believed to bestow good fortune on sailors.

While the choice of dark stone and the striding posture are typically Egyptian, the soft rendering of the flesh and the floating transparent garment she wears are typically Greek.

After her death, she was recognized as the divine figure of Isis and was worshipped by Egyptians and Greeks alike. By royal decree, a statue of the queen had to be placed in every temple in Egypt.

The second statue probably depicts the Ptolematic queen Cleopatra III who ruled between 142-101 BC. Here the sculptor has again combined an Egyptian Greek style, while dressing the queen as Isis.

The underwater discoveries at Thonis Heracleion have raised to the surface many other examples of Greek Egyptian hybrids and crossed associations. Despite Egyptian religious practices originally seeming alien to the Greeks, they would no doubt have recognized the similarities between the Egyptian Gods and their Gods and deities. For Egyptians, Khonsu-the-child, son and heir of Amun, was the divine image of the terrestrial heir from the New Kingdom. For the Greeks in Egypt, Khonsu-the-child was the equivalent of Zeus’s son Herakles. It was after Herakles that the temple and in turn the city Thonis Heracleion was named after.

Artefacts at Thonis Heracleion have revealed this cross connection between Khonsu-the-child and Herakles: a pink granite shrine which would have housed a sacred statue of the cities patron god, another a statue of a member of the Thonis Heracleion elite. According the inscription carved into his torso, he is a benefactor to the temple of Amun-Gereb and Khonsu-the-child.

The statue, which would have stood in the religious complex of Amun-Gereb, has again been executed in a Greek/Egyptian style. Designed in a fashion found across the Mediterranean, these Greek style objects were discovered around the temple of Amun-Gereb and would have been used for religious practices.

The association of the Greek gods with an Egyptian counterpart e.g. Isis and Aphrodite, Khonsu and Herakles, in addition to ritualistic items of a familiar style, would have made settling into their new Egyptian habitat much easier for the Greeks who moved to ports such as Thonis Heracleion.

Their adoption of Egyptian gods was also a good political move concerning the Ptolemaic Pharaohs and local Egyptians no doubt saw it as respectful of the new settlers.

The Ptolemaic Dynasty did go one step further when Ptolemy I introduced to Egypt the god Serapis in order to unify the Greek communities. Serapis combined the appearance and roles of major Greek gods Hades, Zeus and Dionysus in order to create a human shaped Greek version of the animal-headed Egyptian god Osiris.

A colossal head of Serapis was discovered by Goddio and his team, and in its original form would have stood over four metres tall and would have likely been the sacred statue of the temple in which it was housed.

With its humanist rendering, flowing beard and curls Serapis would have been a sharp contrast to the Egyptian statues of gods which would have stood in nearby temples. Another area of Egyptian life uncovered by Goddio are artefacts associated with the Mysteries of Osiris, the most popular festival celebrated annually across Egypt during the month of Khoiak (mid-October to mid-November.)

The Mysteries of Osiris in Thonis Heracleion culminated in two ritual processions. Initially the soil and barley figure of Osiris, and followed by the thirty-three other gods, were carried in papyrus barges on the Grand Canal. The barges were accompanied by 365 oil lamps, one for each day of the year.

Numerous offering models of these barges have been discovered at the bottom of canals surrounding the temple of Amun-Gereb at Thonis Heracleion. They range in size from 6 to 67.5cm and are made of lead, a metal associated with Osiris. Their decoration imitates papyrus, mimicking the real boats used in the ritual.

One of the largest finds in relation to the Mysteries is the garden tank. Made from pink granite and looking like a giant coffin, it was discovered close to the shrine of Amun-Gereb. This tank would have housed the mummified shape of Osiris, which was made from soil and barley gains. Placed in the garden tank and watered with water from the Nile, it was allowed to germinate. 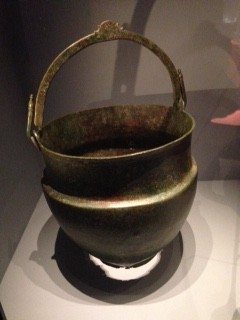 It was not just the Egyptians who took part in the Mysteries Festivities, but also the Greeks.

Having made the connection between Osiris and the Greek god Dionysos, who shared similar traits and beginnings, the Greek settlers found a common ground.

An Egyptian pail fashioned in the style of a Greek wine mixing bowl was found.

This particular one has the inscription BAKOI on its handle which refers to BACCHUS-DIONYSOS and no doubt would have been used in the Mysteries.

On a more costly note, and so far the only gold vessel to have been recovered from Thonis Heracleion, is a shallow dish made from one sheet of gold. These dishes were mainly used throughout the Mediterranean for both drinking and pouring liquid offerings, notably of wine or water. Perhaps this gleaming dish was used to offer wine to Osiris-Dionysos during the Mysteries. The objects that I have described are only a small part of the exhibition.The smaller items sit in dark recesses in the Mediterranean Sea coloured walls with videos and projected images showing the under water archaeologists at work. The larger items stand alone in the subterranean gloom that has been created to mimic their 1,300 year resting place. In some cases the ceilings have had to be heightened in order to accommodate the towering sculptures. It is an exhibition, which will refuel that Indiana Jones spirit and no doubt spark some new ones. For me, I am currently trying to get a photo of France’s answer to Indy, Franck Goddio, without seeming like a weirdo, an unsuccessful feat.

On leaving the exhibition, you come face to face with a quote from Goddio written on the wall “What we know now is just a fraction, we are still at the beginning of our search.” After seeing what I’ve seen today, I am almost inclined to take some time out and do something worthwhile with my time. See you in Abukir Bay!