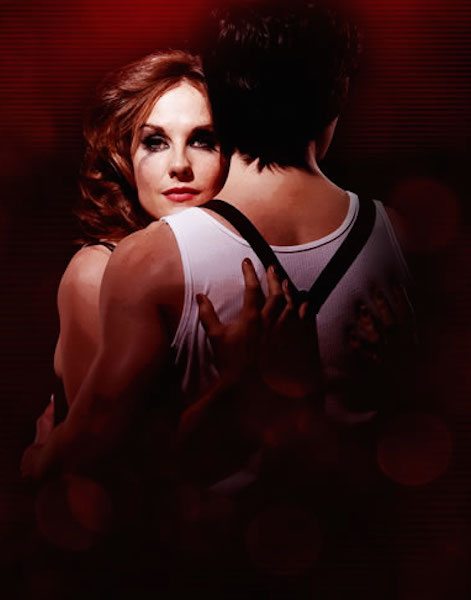 At the Playhouse the Sydney Opera House presented in association with Luckiest Productions, Neil Gooding Productions and Tinderbox Productions the dazzling, dynamic and exciting Hayes Theatre production of Sweet Charity.

Sweet Charity is a bold, brassy American musical with music by Cy Coleman, lyrics by Dorothy Fields from a book by Neil Simon. It is based on an original screenplay by Federico Fellini, Tulio Pinelli and Ennio Plaiano. It was originally produced for the Broadway Stage by Fryer, Carr and Harris and conceived, staged and choreographed by American dancer, director and screenwriter Bob Fosse (1927-1987).

Must admit to being an enthusiastic fan of Bob Fosse, whose innovative, distinctive and animated choreography and use of props has lingered with me since his semi-autobiographical film, All That Jazz [1979].

This exceptional production has already a compelling history of success. It started as an independent musical a year ago playing at the Hayes Theatre, in King’s Cross in Sydney before moving to the Playhouse Theatre at one of the most elegant prestigious locations in the world; Sydney Opera House. I loved the clarity of the production, the vibrancy of the performers and the sheer joy of being entertained. During 2015 audiences at Canberra, Melbourne and Wollongong will also witness the talents and have the time of their lives savouring the musical pleasures of Sweet Charity. She’s a girl with hope in the human race.

This tale of a sensational triumph is a tribute to the vision, the painstaking commitment, work ethics and energy of the cast and creatives. It’s a tantalising effervescent delivery of music and dance.

Upon arriving in the theatre the audience was immediately invited into the Fandango Ballroom. The girls interacted with the audience their sexy and provocative moves set the scene.

Girls Girls Girls the signs hung on the curtains were warmly lit and provocative in their message. Eight aqua painted chairs were strategically positioned in front of two long rectangular mirrors.

This provided a visually effective backdrop for the girls to seductively adjust hair or apply lipstick, cast flirtatious glances and solicit the audience.

I loved the minimalist approach to the set design and these versatile mirrors were manoeuvred throughout the production to create a variety of illusionary spaces and scenes. Owen Phillips has been imaginative as the Set Designer. He has crafted the essence of the scenes by extracting carefully the intention of the production.

The audience was transported immediately by the very rewarding groovy sounds of the sensational Band.

There is something very special about hearing and seeing a live performance, the wonder of it is a mysterious and sensual pleasure.

In Act 1 a young woman Charity Hope Valentine [Verity Hunt-Ballard] meets her boyfriend Charlie [Martin Crewes] and she delivers the dialogue of romance that she imagines him saying. Meanwhile Charlie is completely unfazed as he preens himself in an intentionally detached manner. Charity bursts into singing You Should See Yourself and her starlike qualities explode upon the audience sheading a voice that is bigger than life and a character that is needy and vulnerable. The offensive Charlie steals her handbag and pushes her into the lake.

Her optimism is evident and rarely lapses in this story of a young woman with no family, education or skills. She returns to the Fandango Ballroom where she is reprimanded by Nickie a fellow dancer who strongly advises “you run your heart like a hotel – you’ve always got people checking in and checking out”.

Quick witted dialogue that is often very humours is a consistent feature of this evergreen musical. The dancers at the Ballroom continue propositioning the audience and this climaxes in the alluring and pulsating singing of the very popular song Big Spender.

After work Charity bumps into Vittorio Vidal [Martin Crewes] as he chases his beautiful mistress Ursula [Debora Krizak]. This chance meeting results in Charity accompanying Vittorio to the Pompeii Club to dance.

The fabulous black and white costumes worn by the dancers were visually tantalising and reflective of Tim Chappel’s inventive and flamboyant costume design changes throughout the production. This was very quirky with each dancer wearing one black and one white stylish shoe. Charity manages to contrive her way with Vittorio into his apartment where he is touched by her charm and honesty. While he finds props from his old movies to give her in appreciation she breaks into song If My Friends Could See Me Now. She is consumed with happiness and good fortune and the audience responds with warmth and empathy.

Meanwhile Ursula arrives and a passionate reunion ensues where Vittorio sings an exquisite, intense and moving song Too Many Tomorrows. The humour of hiding Charity in the wardrobe and rediscovering her the next morning is delightfully staged. One of the highlights for me was the carefully crafted scene in which Charity is stuck in a broken elevator with the shy tax accountant Oscar Lindquist [Martin Crewes]. The superb acting coupled with perfect timing created an impeccable sequence. They performed on a lighted square making it very believable.

After interval the performers, dressed in shades of cream and white, were on stage in The Rhythm of Life Church, beckoning the audience to join in the congregation pulling them back into the theatrical experience. The religious fervour was soon abandoned and the singing of the Rhythm of Life transformed the mood and the hippie culture was unveiled to rapturous applause from the audience. Oscar and Charity quickly leave the church as a police raid threatens and when the evening ends Oscar kisses her hand and names her “Sweet Charity”. Unfortunately after marriage is proposed and accepted Charity’s dreams are unfulfilled yet again. However she is visited by a fairy and hope and optimism for the future permeate her final scenes.

This production is a vehicle for extraordinary performances and exceptional creatives. In 2014 Verity Hunt-Ballard won her second Helpmann Award for Best Female Actor in a Musical for her astonishingly remarkable and sensitive portrayal of Charity.

The audience was deeply moved by her rigorous and demanding performance.

All of the other enormously talented cast members obviously admired and appreciated Verity by the very respectful gaze of admiration from each of them at the final bows.

Andrew Hallsworth is a multiple Helpmann Award nominee and he recently won the 2014 Helpmann Award for Best Choreography in a Musical for his work on the production of Sweet Charity at Hayes Theatre Company. His creative drive, esteemed knowledge of dance, accurate ability to interpret the Director’s vision made him a very worthy recipient of this significant Award. I’m certain he was able to communicate his own ideas to enhance the production that thrilled the audiences.

Dean Bryant the Director and receiver of the Helpmann Award for Best Director of a Musical for the Hayes Theatre Company’s 2014 production of Sweet Charity is to be congratulated for executing a complex role with finesse and an artistic vision.

His passion I believe has inspired the cast and creatives to deliver their finest roles. He must be a discerning communicator who empowered all those involved to understand and realise his conceptual interpretation of this enormously entertaining and compassionate musical Sweet Charity. Music by Cy Coleman, Lyrics by Dorothy Fields, from a book by Neil Simon

A love for what is current, an eye for aesthetics and, an ongoing joy of humour are criteria for appreciating artists on show at Robin Gibson’s Gallery, Sydney