Tic Toc, did you know the ‘remorseless subjection of humanity to the clock’ has only really been in play since the invention of the pendulum by the Dutch mathematician and scientist Christian Huygens.

He invented a clock controlled by the motion of a pendulum in 1656, having solved the problem of making the theory attached to the period of a pendulum’s swing discovered by Galileo in Pisa Cathedral in 1583, into a physical presence.

Clocks such as this stunning collection, from Valentine’s Antique Gallery at Bendigo (VIC),  are today fast becoming a curiosity, and a collectable item highly sought after; a visual reminder of our heritage and the complex evolution of European clock and watchmaking. Buying, collecting, selling, valuing and restoring antiques and art with confidence is an aim of Australian Antique & Art Dealers Association (AA&ADA) dealers, who present the Sydney Antiques and Art Fair offer professional advice and adhere to their Code of Practice.

For those wishing to furnish their homes with an eye to the future, gaining an interior that seems timeless, but never tired can become an exciting goal if you consider choosing from a splendid array of antiques and art on display at the AA&ADA Sydney Antiques & Art Fair in Sydney, September 7 – 11 in The Kensington Room at Royal Randwick Racecourse.

Tickets are now available to the Gala Preview, which includes Champagne and canapés, as well as daily admission and lectures being offered.

How delightful is this Charles II Needlework Mirror Frame from Ian and Belinda Perryman, richly embroidered with some of the flowers of Spring traditionally the time for renewal. It would certainly look wonderful in my boudoir, and is from a period of history I enjoy learning about.

Learning is a serious occupation for many who are intrigued with the world of antiques and art. However some people seemingly still have difficulty with the terminology ‘antique’, a word that has been bandied about over the years by those seeking to ‘get rich quick’. While it is true that some antiques can prove a good investment over time, remember they are never that unless you part with them and realise the profit. The Charm of the Fob – A Collection of Georgian and Regency fob seals, courtesy Anne Schofield Antiques (NSW)

Collecting antiques is an emotional, enriching and often endearing journey. Anne Schofield one of Australia’s most respected dealers in antique jewellery, is offering a splendid collection of fob seals from the Georgian period in England (1714-1830) including some in the Regency style. She has noted

It’s hard to imagine a time when there was no telephone, email or internet for communication but such a time existed not so very long ago. In the 18th and early 19th centuries, all business and personal correspondence was conducted via handwritten letters secured with wax that was then stamped with personal seals.

These seals were made of beautifully carved gemstones such as cornelian, chalcedony, and bloodstone, set in gold rings and fobs. The small pendant jewels were then hung from chatelaines or watch chains to accompany a fob watch.

Many carry sentimental messages, often in French, such as; “I will love you till I die” or “absence makes the heart grow fonder”. Some are even more cryptic – carved as picture puzzles which the recipient had to decipher in order to work out the meaning. The categories available in the antiques world can seem endless; Antiquities, Architectural and Garden, Books and Maps, Ceramics and Glass, Clocks and Barometers, Coins, Banknotes and Medallions, Fine Art and Sculpture, Furniture, Jewellery and Watches, Lighting, Militaria, Arms and Armours, Miscellaneous, Rugs, Carpets and Textiles, Silver and Tribal wares to name some.

The ability to judge authenticity may seem difficult for the layperson and this is where a knowledge gained through education is important, as well as establishing a working relationship with a qualified antique dealer.

Watch our Video – What is an Antique?

My own journey began in Sydney, where I first encountered the world of antiques in a glorious old colonial corner shop in St Leonards. In her stylish abode and retail space antique dealer Madeleine Fyfe-Smith not only offered a wonderful range of goods to choose from in many different styles, but also inspiring talks to expand people’s knowledge about what they were seeing.

She also taught that antiques looked just as wonderful in a minimalist contemporary setting as something knew. This was because a really special antique piece was all about good design, quality materials and great craftsmanship, especially if it was made before 1830, a date considered a cut off point for handcrafting as against the use of machines. In today’s age it makes good green environmental sense to continue to recycle furniture and objects. However, only those made with an eye to quality do and shall survive.

Often misrepresented as being the hobby of only a select few, in my experience collecting antiques it is a pleasure indulged in by people from very different backgrounds and from all walks of life. Some plan and set out in ten years to own say five wonderful things, that not only will always given them pleasure, but also peak the interest of those they share them with.

So if you are now sick of replacing your furniture and rejigging your interior every few years, perhaps its time to consider an alternative, an interior containing classical pieces that will outlast the vagaries of time and trends and allow you to enjoy other experiences as well. You can keep small works in a stunning rare specimen cabinet like the one from Simpson’s Antiques. Textiles are so wonderful to live with in an interior…

There’s nothing like a wonderful warm and inviting textile on the wall to set a mood, or a favourite piece or two that arrived during the years of The China Trade, which became the channel of early cross-cultural influence all around the world. Rank badges were square – in Chinese mythology the square form related to the earth. Circular badges were not allowed to be worn by civil officials or their wives – the circular form related to heaven and this form was for members of the Imperial Court. This badge is unusual because it has a circular form inside the square. The bird is a Malay Peacock which was the delegated bird for a 3rd rank official. Household God of Double Happiness, a stunning ceramic reminder of a good friend and collector of all things wonderful from his Chinese ancestry

Their influence today is still strong as is the impression my household God of Double Happiness a symbol of home makes on my guests.

Where he is you will find me also.

Of late, ‘tis true, quite sick of Rome and Greece
We fetch our models from the wise Chinese;
European artists are too cool and chaste,
For Mand’rin is the only man of taste… A wonderful soapstone statue of the Chinese philosopher and teacher Confucius (c551 BC-479 BC), so tactile to the touch, reminds me to continue to pursue knowledge to my life’s end. An iconic figure, almost mythical, his quotes (true or not) have made him a legend in our time so I am always searching for the mind behind the myth, which was considerable. 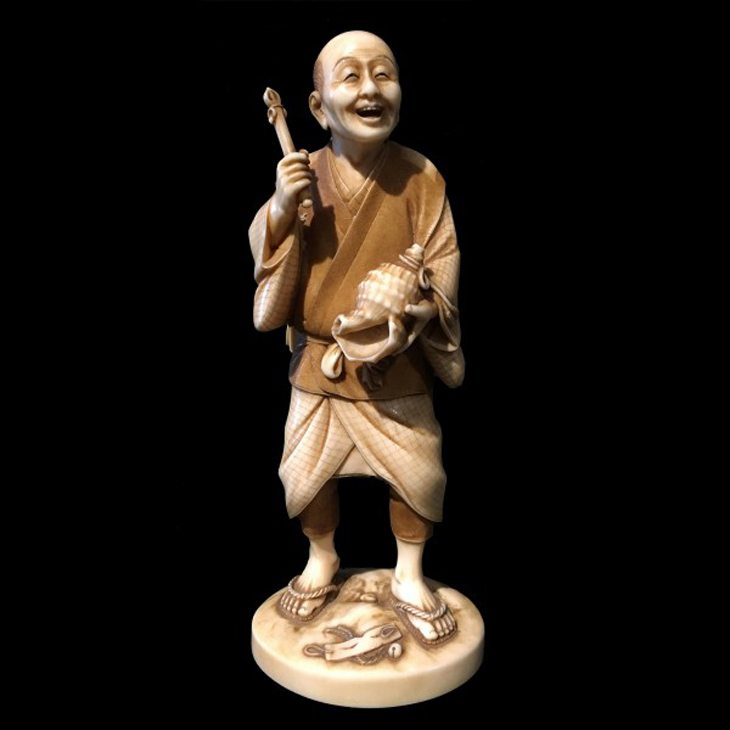 A delightful companion piece would be the fine Meiji period (1868-1912) ivory figure, signed to base in cinnabar panel. Japanese c. 1890 offered by Walter & Co (TAS). Works like this became available when Japan opened up to the West after American Navy Commander Perry’s visit in 1853.

Many ivory figurines are intricately carved by highly skilled craftsmen. Regulations in the trade in ivory around the globe have heightened the demand for old pieces which can still be legally traded. It has also led to a proliferation in fakes and so working with a good dealer such as third generation antique dealers like AA&ADA member Walter and Co, offers a measure of protection for the collector. Antiques provide interest and continually inspires a pursuit of knowledge and excellence, which expands and enriches our experiences in life, as we strive to achieve. They provide interest in that their stories of acquisition can be so interesting.

Great works from any discipline in the world of art and antiques will work in any man-made environment as long as the object has integrity, form and proportion pleasing to the eye, a subject that challenges the mind, engages the spirit and connects with the soul of the viewer. In The Crown: Series 1, Episode 4 the mantle of change the young Queen Elizabeth is wearing proves heavy, as she takes on Winston Churchill and the Smog of 1952