At the time he was painting in France Claude Monet (1840-1926) influenced painters all around the world, including Australian and American artists who flocked to paint at his side or to immerse themselves in his work. Consequently it gave them all a whole new perspective on both life and art and a firm belief in their own ability to produce works that reflected the growing intellectual and social life of their own city, countries and the passions and fashions of the citizens.

It was all about art reflecting the people who were busy making the modern world and after Monet the whole world changed.

Sydney Moderns: Art for a New World is an exhibition currently on show now at the Art Gallery of NSW until October presenting more than 180 early modern works by Australia’s most celebrated and respected painters.

This landmark exhibition is structured around five themes: colour, light and colour-music; modern life, modern city; still life as laboratory table; landscapes of modernity; and paths to Australian abstraction. It is no surprise that it is drawing big crowds. Painter Grace Cossington Smith’s wonderful ‘café’ scene has remained in my mind ever since I was a little girl and encountered it for the first time. It was a warm experience then, and it still is now. Her ability as a colourist with a ‘sure sense of structure’ was unique in her own time.

She captured the energy of city life in its vibrant ‘café society’, one that has important links for our own time. It was a scene she had encountered herself when visiting David Jones Department store cafe, where my mother and I used to have tea when we went to town in the 50’s.

As you can see everyone is dressed up to do that, which was also my experience. At that time going to the city was still an occasion to celebrate.

The show reflects the intense period of activity that took place between the two major world wars of the twentieth century when Sydney was rapidly being modernized.

Grace Cossington Smith also captured this moment well in her paintings of the Sydney Harbour Bridge under construction. Her work The Bridge in Curve c1930 documents that unique symbol of hope that has come to mean so much to the cities residents and an icon of its dynamic qualities around the world and a symbol of its modernism. 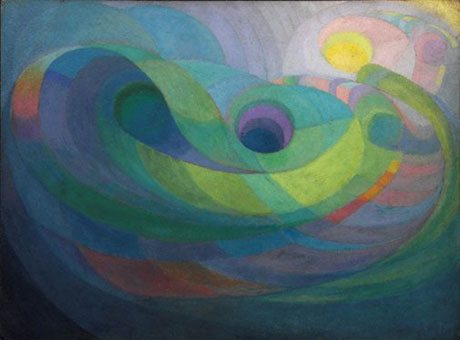 There has long been a tendency for Australians to believe that if art comes from overseas it must be better than what we can offer here. Exhibitions like Sydney Moderns and the Australian Impressionists also now on in Melbourne go a long way in correcting that perception.

Works borrowed from Australia’s major public galleries and private collections augments the Art Gallery of NSW’s own rich collection and the paintings were rendered in the years between 1915 and the early 1940s, when they presented the diverse and versatile forms of Sydney modernism.

All the artists involved are considered post-Impressionists. Roy de Maistre (1894-1968) searched for spiritual meaning through abstraction and was with fellow artist Ronald Wakelin,, kept busy exploring the relationship between art and music. While his works gained critical acclaim they were in the main derided by the cities ‘establishment’. This was the time when the underground rail system was also being extended and grand department stores such as David Jones were expanding to offer fashionable goods reflecting the trends happening all over the world.

Progressive artists in Sydney were responding to an all-new cosmopolitan milieu by exploring and promoting modernity, modernism and the international Le Style Moderne in their work through great revolutions in colour and light, and by gradually developing forms of abstraction.

It considers their relationship to modern Australian life, to nationalism and internationalism, and to Australia’s dominant artistic genre of the time – landscape painting. In Australia artists had long been enraptured by the bush where they searched for motifs which could iconically define the Australian experience.

What artist like Weaver Hawkins discovered was that life on the Sydney Underground rail system was not very different to that back in London, where commuters busied themselves reading the daily newspapers on the way to work, a ritual that became integral to life until the advent of modern technology. Cover images designed by artists such as Harold Cazneaux, Margaret Preston and Thea Proctor for The Home magazine were produced in Sydney by Sydney George Ure Smith (1887-1949).

Ure Smith had arrived in Melbourne in 1889 from London beginning art classes in 1906, specializing in pen and pencil drawing.

He was all about quality art and design and seconded many to his cause.

His magazine ‘The Home’ flourished from 1920 – 1942 and fostered ‘good taste’ in all things, but most especially in the setting we live our daily lives. Harold Cazneaux’s wonderful portrait of Doris Zinkeisen was the first photographic cover for ‘The Home’ magazine styled after the high quality and exclusivity of Vogue, and Cazneaux was its chief photographer.

This quality publication set an avant-garde tone by employing contemporary artists including Margaret Preston, Grace Cossington Smith and Thea Proctor, all of whom embodied the assertive, independent and free-thinking ideal of the modern woman. Ure Smith was a progressive chap, establishing his own position among artists through publishing. He displayed exemplary leadership qualities as president of the Society of Artists (1921-48) and by chairing various committees for the cultural section of the Australian pavilions at New York World’s Fair (1939).

He also became a member of the committee for the Carnegie sponsored exhibition, Art of Australia, which toured North America (1941-45)  helping to establish an Australian identity abroad.

As well as teaching Proctor, Ashton also taught many other great Australian artists including William Dobell, George Lambert and Sydney Ure Smith to name but a few. Thea Proctor was very influenced by the whole fascination with Japonaiserie which like Chinoiserie, was unlike anything actually made in Japan, but inspired by simplicity, lightness and sparseness three of the elements most admired. Together with fellow artist Margaret Preston, she held an exhibition in Sydney and Melbourne in 1925 of the brightly coloured woodcuts they became renowned for, which were framed appropriately in scarlet.

While Proctor’s covers for The Home brought her celebrity status, they did not fill the coffers and so she wrote about fashion, flower arranging and interior design and put her talents to work producing society events while painting society portraits.

She became an arbiter of taste, was painted by her friend George Lambert and promoted the works of her relative John Peter Russell whose work is ironically on display here in Melbourne at the same time as hers is in Sydney, as part of the Australian Impressionists.

Galleries all around Australia are busy contributing a great deal to helping Australians gain an appreciation for the works of their own significant artists of the modern age, as well as providing many with a starting point for examining Australia’s cultural and societal evolution through art.

The many diverse works that make up the Sydney Moderns show present us with dynamic patterns of Sydney’s urban life under light-filled skies and in vibrantly coloured interiors, which were revealing realms for an all-encompassing visual experience of life.

The quality of the works presented is second to none. they are all beautifully selected, wonderfully diverse and full of bravura painting of a style seldom seen all at once. Be sure to catch it before it closes on October 7, 2013. Watch the Video of the Installation

Sponsored by the Art Gallery Society of NSW in celebration of its 60th anniversary, and presented in partnership with Destination NSW.

‘The exhibition is a wonderful celebration of our glorious harbour city,’ said the Hon Barry O’Farrell, Premier of NSW.

Sydney Moderns is a visual feast showcasing the confidence and style of the times. The NSW Government, through our tourism and major events agency Destination NSW, is proud to bring this outstanding exhibition to Sydney at the Art Gallery of NSW.’

Sydney Moderns is accompanied by a major book, published by the Art Gallery of NSW, which elaborates on the themes of the show – its artists, their preoccupations, and the design and architectural work of the time. Generously illustrated, the book has five major essays by Deborah Edwards, Denise Mimmocchi and Terence Maloon, and contributions from more than 30 specialist writers.