Remember how theoretically technology was supposed to make our lives easier? In practice it tends to make our lives more complicated. This paradox has led many to embrace simplicity. Arriving at Sydney airport recently as I traversed the long walk into the terminal a very simple symbolic advertisement caught my eye. On the wall was a giant black canvas. In the left hand corner a creative had drawn in lime green ink the outline of a large square. Inside the square was a lime green dot. Outside the square up towards the right hand corner of the black page the lime green dot was repeated. In the right hand lower corner was one word – Deloitte. Discovering fraud by those involved in the Great North Railway in England during the 19th century accountant William Welch Deloitte (1818-1898) was a man unique in his time and profession. His innovative imagination operated both inside and outside the square.  The advertisement reflected his legacy and echoed 20th century genius Albert Einstein’s quote “Make everything as simple as possible, but not simpler”.

I was in this very attractive city for the opening night of the Australian Antique & Art Dealers Association Show. One of my favourite things on show was The Alpaca’s Tea Party from artist Kate Bergin’s Wild Things Collection whose works are available at the Mossgreen Gallery at Melbourne (see above). I just love her wit and humour. There was also a splendid Parian bust, an awesome French tapestry c1680, a pair of painted mirrors and 16th century Merchants ring that I could have happily taken home. 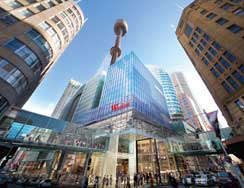 Despite some people saying antiques are only the province of people with white hair there was plenty of fashionable young people about. A young man with a blond ponytail in a 50’s Neil Caffrey style slim suit with beige suede shoes and a gorgeous girl in a short sixties black dress shrouded in an orange bat style architectural coat caught my eye as they paraded and prowled back and forth wanting to see and be seen.

The next day enjoying a walk in the shopping precinct of Sydney from Clarence to Elizabeth Street in a square bounded by Martin Place and Park Street I re-discovered the city that was once a jumble of small crooked colonial streets. It is now a grown up city that understands that simplicity and repose are qualities that measure the true value of the work of art it has become. 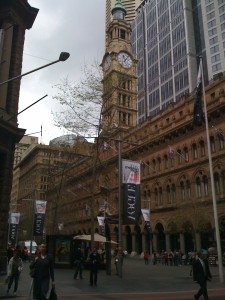 If how the city looked can be attributed to the Sydney City Council then they are certainly doing a simply splendid job.  Traditional and contemporary architecture standing side-by-side is a powerful image. It reflects the layers of this energizing city and its history, the formation of its character and its spiritual heart. It looked very pristine and entirely serene, cloaked as it is today in a marvelous mantle of maturity. Anyone coming from any other city in the world for a visit to Sydney must be as impressed as I was. 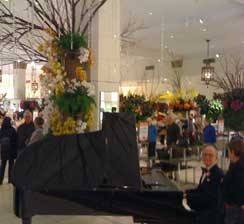 Australian flags fluttered in a friendly fashion in a light breeze in Martin Place alongside banners for the Spring Festival. In unexpected places gardens full of annual flowers nodding their colourful heads were bounded by wide walls people could sit on to chat. Café’s with outdoor tables everywhere were full and buzzing busily. The parks were green and lush with even more flowers creating a giant carpet of colour that shone in the mid morning sun. It was also streaming between buildings old and new refracting and reflecting light and city life. The glass façade of the recently renovated shopping precinct Westfield, completed just in time for Vogue’s Spring Fashion Week looked quite simply sensational. Designed to be aesthetically pleasing its spaces are superb and its fittings glamorous. The crowd seemed clamouring and eager, which was unexpected.

Inside that wonderful store David Jones the pianist on the grand piano was surrounded by adoring ladies. He had a huge smile on his face and looked integral to this splendid oasis of marble and old world charm.

DJ’s as its affectionately called in Sydney has named its annual Spring flower show in 2011 Floriography: The Language of Flowers. On view are some 30,000+ blooms of incredible beauty and variety. The display itself could only be described as mind blowing.

Buses outside were busily spewing out the members of garden societies and associations, who had arranged special tours to come and view this now very popular annual event. All I could think in the middle of this melee was that the ancient goddess Flora would certainly be pleased.

After taking my time to ooh and aagh like everyone else in the heady scented atmosphere I retreated back down town to one of my favourite places the majestic surroundings of the delightful heritage listed Strand Arcade.

The Strand opened in 1892 and remains in its original form 340 feet long, and three stories high, running between Pitt and George Streets. Its magnificent cedar staircases at each end of the arcade lead to the second and third floor galleries linked by a central bridge.

The arcade was one of the first Victorian buildings in Sydney designed to take into account the harsh Australian climate. The roof was made of glass tinted to reduce glare, and the access gallery of the top floor was projected to shade the lower levels. Delicate ironworks brackets supported the galleries and railings, while finely carved cedar balustrades and shopfronts, marble columns and a richly tiled floor were integral to its welcoming ambience. The original lighting was very innovative, a combined gas and electric, some of which still exists. It was in 1891 the arcade was named for the famous London street that links the City of London and City of Westminster, The Strand.

Originally billed as the finest public thoroughfare in the Australian colonies, today The Strand it is a delightful refuge from the hustle and bustle outside, although its coffee houses were full to overflowing and happy chatter abounded. As I indulged in perhaps the best latte that I have ever had in recent times and checked that the old Nut Shop and Coomb’s Shoe Repairs memories from my childhood were still there, I began to reflect on the decades of development in the city I had lived and raised my children in.

Over a fifty year period of my memories Sydney seems to have gone through three phases. From raw and wildly enthusiastic in the 50’s and 60’s to optimistic, confident and forward looking in the 70’s and 80’s. Since 1998 and the election of the Independent community based representative Clover Moore and her team Sydney has undergone a refinement of its city centre. As Lord Mayor, Clover Moore has led the Council to undertake the most extensive public consultation in its history and to contribute to developing Sustainable Sydney 2030, a strategy to secure Sydney’s future as one of the world’s leading green livable cities.

Cr Phillip Black is in charge of heritage and has consulted with the community to conserve some of her best buildings. Now transformed Sydney oozes self confidence with an ambition that has no boundaries. It is focused on the future environmentally, socially, culturally and economically. Having lived away from Sydney since 1998 I view it now wearing very different spectacles and they are certainly not rose coloured. In some lights it makes me feel like an outsider looking in on a scene that while in some ways is very familiar, in others is very very different. It is however always emboldening. 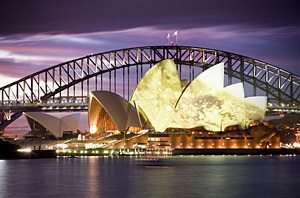 Being there now is always like a new and exciting experience. In Sydney the atmosphere and ambiance is palatable. It wears its mantle of mild mannered maturity well. In 2011 Sydney has surely become the most attractive of all Australia’s coastal cities. It seems that during the last decade of my lifetime the city and its people have all been very busy moving from living inside to living and thriving well outside the square.

Each season we see different trends, fads and fashions, but one fabric remains a staple, and that’s denim. I’d hazard a guess, every man, woman and child’s wardrobe contains at least one piece of denim! I don’t care how young or old you are, there is usually a piece made…