Joanna Murray-Smith invites us into the world of Patricia Highsmith (1921-1995), who was professionally one of the most accomplished crime writers of the twentieth century.

Personally, she was a complicated and dissident personality.

The theatrical premiere of the Sydney Theatre Company by special arrangement with Geffen Playhouse, Los Angeles presented the co-world premiere of Switzerland, a sharp challenging and imaginative work that I found mesmerising.

Joanna mastered the subtleties of a thriller, built darkness and the deformation of characters with an uncanny knowledge of human frailties.

This includes the irreversible impact of childhood and the diverse meanings of love.

She understands the power and significance of every word she has penned. 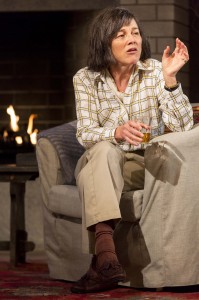 The harshness and cruelty of the reality of both protagonists was expertly underpinned by an incisive humour that connected with the audience and gave moments of relief touching on the fragility of human nature.

The outstanding success of this production had its foundation in collaboration and communication.

It was perceptibly evident that cast and creative team shared a vision for the play.

Every component of the exceptional production was impeccable.

Joanna’s playwriting prowess reached a pinnacle of excellence and the admiration for her work was palpable in the audience.

According to a radio interview with the Director Sarah Goodes the collaboration process began with Joanna’s attendance at the two workshops prior to rehearsals.

Sarah praised Joanna for her ability to collaborate and to make appropriate changes without being precious.

This professional and gracious attitude was a prerequisite that nurtured success at every level of the production.

I discovered from the interview that Sarah was an enthusiastic photographer and she linked this and the chorography of dance to her directorial style.

She articulated “in theatre I find truth in each moment”. She continued that she wanted to know what the core was within and how it could be expressed. She felt there was a heightened reality in theatre and perhaps the senses were more finely tuned.

The scrupulous execution of her directorial role was paramount in creating a drama fraught with tension, obsession, bitterness and uncompromising, biased attitudes.

Sarah’s blocking of the actors across the stage used the space to draw the audience into the home of Patricia. Michael Scott-Mitchell designed the set creating the dark theatrical cavern, home to Patricia in the Swiss Alps.

The powerful set was masculine in ambience and exhibited her private collection of artillery. A portrait of the young and beautiful Patricia was to my eye the only feminine distraction however, it ambiguously and sinisterly intimated blood and murder.

Recessed windows accentuated Patricia’s isolation, even her neighbours were unaware a world renowned author lived nearby.

Her desk held her beloved typewriter. The lighted fireplace glowed and was symbolic of the intense passions and destructive urges deep within the characters.

The rectangular mirror reflected the black spiral staircase that would become like bars of a cell. Patricia [award-winning NZ born actress Sarah Peirse] walked down the staircase in the opening scene and was then interrupted by the arrival of a stranger [actor Eamon Farren].

A patter of witty dialogue ensued where Patricia berated the “new age of meritocracy” incited by computers and her abhorrence of emails.

The witty and intelligent banter continued as Edward the trouble shooter from Patricia’s publishers explained he was sent on a mission to gain her signature for the final and best book about her world famous character creation, Tom Ripley.

Patricia began her assault on Americans and the racist nature of bitingly cruel comments continued throughout the dialogue.

She initiated very funny remarks about New York dinners, coffee and water including they will “torture you with intravenous Bircher muesli” and “what happened to tap water”.

Edward constantly grapples with his mission of securing a signature while Patricia searches for the underlying motivation for Edward’s presence. An unsettling anticipation invades as the morbidity and egocentric personalities come to the fore.

Literary discussions were interspersed and the power of the word explored as the ominous tension built.

Graham Greene wrote Patricia Highsmith’s “characters are irrational; they leap to life in there very lack of reason”.

Joanna was astutely aware of this characterisation model and demonstrated in her script a profound psychological understanding of perverse characters motivated by immorality and the power to take away life.

The distasteful connection between the protagonists grew as methods of murder were uncovered as a shared interest.

This link was reinforced by their mutual love of weaponry as Patricia compared it to collecting art or sculpture.

Not only were weapons engineering and scientific masterpieces but she believed they had the additional value of being practical.

An appalling atmosphere ensued with the metamorphosis of Edward’s character and the bizarre relationship that developed between him and Patricia. They both engineered a horrific climax that was reciprocally rewarding and pungently corrupt.

Their blatant disregard for life and morose obsession with murder was ultimately consummated through the transformation of Edward into the fictional character created by Patricia. Sarah Peirce was faultless in her portrayal of Patricia Highsmith.

She meticulously assumed the mannerisms, the walk, the talk and the stance of Patricia.

She delivered her acidic lines with clarity and disdain and held the focus of the character in every pore of her performance.

However his skillful performance evolved and an elegant, suave, dangerous and monstrous personality emerged.

He cast an aura of belief about an exceptionally grotesque and brutal being.

The cast and creative team were aligned in their pursuit of perfection in this production.

The Sydney Theatre Company’s play Switzerland provided Sydney audiences with a theatrical experience that delivered excellence and a haunting narrative of dangerous motivation and personality disintegration.

Switzerland
A Play by Joanna Murray-Smith

Reading rocks, so join the movement and be part of the National Year of Reading 2012 now. You set a fine example to your children if you read a lot as well.