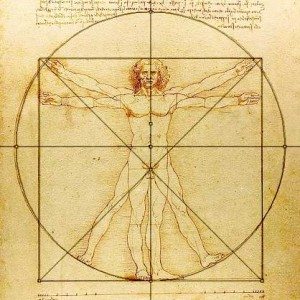 A church or cathedral is made up of sacred shapes such as pointed arches, circles and ogee curves. The circle represents sacred order, the earth, sun, moon, planets and the whole of creation. The ogee shape derives from the architecture of Islam, which is abstract although fine and decorative, portraying geometric, floral, Arabesque, and calligraphic designs. Pointed arches were the main characteristics of the Gothic style in medieval Europe from the eleventh century onward. The ogee curve, heavily influenced by the Crusaders, was introduced during the fourteenth and fifteenth centuries into Europe. Both shapes point ‘heavenward’ to God, the being believed in monotheistic religions such as Judaism, Islam and Christianity to be the creator of our universe. The square is symbolic of man’s ability to be fair, honest and direct. The circumference of the circle is the same as the perimeter of the square, thereby ‘sparing the circle’. The human body is the place where the synthesis of earth (square) and heaven (circle occurs)

A classic watch, such as the Cartier Tank Louis Cartier, is a must accessory for any man or woman. I think the choice of watch says a lot about the wearer. Is it just to tell the time, or is it also a piece of jewellery worn for aesthetics? Personally,…