The Tait Memorial Trust at London recently announced it will hold an event on April 1, 2014, to launch of a new recording Jewels of the Bel Canto featuring Australian born soprano Elena Xanthoudakis, who was a 2008 Tait Prize winner and a “Borletti-Buitoni Trust artist’.

Released by Signum Records the CD Jewels of the Bel Canto has been recorded by Elena with the Royal Northern Sinfonia, under the guidance of that great master of the Bel Canto tradition, Richard Bonynge and is generously supported by the Borletti Buitoni Trust.

Bel Canto is Italian for beautiful singing and has an emphasis on virtuosity and beauty of tone.

Not in common use until c.1880, today the term is slightly more ambiguous, usually referring to Italian singing methods of the 17th and 18th centuries, particularly the early Romantic age.

Elena performed as Eurydice for the Pinchgut Opera in Sydney in 2011. She holds a Bachelor of Music with Honours and Graduate Diploma of Opera from the Victorian College of the Arts and a Master of Music degree from the University of Melbourne.

The process of making this recording involved Elena receiving coaching from Maestro Richard Bonynge in Switzerland, who is the conductor. The Tait Memorial Trust was founded by Melbourne born Isla Baring OAM and her mother Viola, Lady Tait (1911 – 2002) at London in 1992, in memory of her father, Sir Frank Tait and his four brothers. They all played an important part in the establishment of theatre and the performing arts in Australia.

Indeed it was Sir Frank who enabled Joan Sutherland to return home to perform with Richard Bonynge as artistic director and conductor, where she sang some of the best performances of her career. Dame Joan eventually became a Founding Patron of  The Tait Memorial Trust. At London they have raised over 250,000 pounds to help over 200 young Australian performing artists, including singers, musicians, actors and ballet dancers.

Lisa Baring said ‘the joy of watching their careers flourish makes all of the hard work so very worthwhile’. She has requested Australians interested in providing their support for the performance arts to ‘please help us to build our new Foundation’ now established in Australia.

The Tait Performing Arts Association has an aim of supporting young Australian performing artists to further their careers in the UK and in Europe through the provision of scholarships and awards. The Association was formed in 2011 by Lisa Baring in memory of both her parents Sir Frank and Lady Tait. It supports the same ideals as the Tait Memorial Trust, London.

Isla Baring believes ‘we can work together to spread our wings and to help nurture our young talent to survive in this competitive world’. The Tait family historically became involved in the legendary Australian theatrical company J C Williamsons, which was founded in the late 19th century.

As it grew the company became an incredible performance arts dynasty, which allowed millions of Australians to see and hear so many international artists, operas, recitals , musicals over a sixty year period. The company became well known for its spectacular, large-scale productions.

As the company expanded it produced not only Gilbert & Sullivan operas and musical comedies, but also grand opera, ballet seasons and concert tours with famous visiting celebrity singers and musicians.

They eventually extended their reach right into London’s West End, forming a love affair with the creative life there as well. Grand stars of the stage from that time include Dame Nellie Melba, Sarah Bernhardt and Gladys Moncrief all of whom my Nana and my mother constantly talked about when I was a small child.

Indeed my own passion for the performance arts were nurtured and inspired by my Nana, who took me to see many wonderful ballet performances and Gilbert and Sullivan productions produced by J.C. Williamsons during my formative years.

If you are planning a trip to London or if you live in London consider attending the Tait Memorial Trust London Events. They offer a lively program.

In March Isla Baring would like to welcome you to Stoke Lodge, the home of the Australian High Commissioner on March 18th to celebrate the launch of our new Friends scheme and to thank all of our current Friends for their loyal support.

Sasha Carruozzo the wife of His Excellency, is kindly hosting this special event with Chairman, Isla Baring.  Adam Szabo will be playing a short concert on his beloved cello. 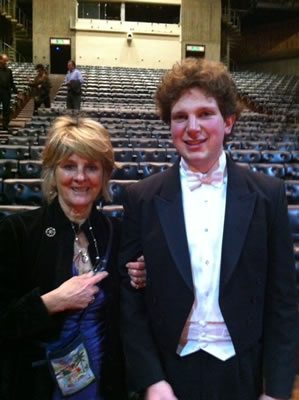 At 49 Queen’s Gate Terrace on April 8th, there will be a concert ‘Wagner in the Salon’ with Leslie Howard on Piano, Coady Green on Piano and soprano Greta Bradman, which will be introduced by Ross Alley – music lecturer for Birkbeck College at the University of London.

The recently announced gala event at the Royal Ballet School on June 12th with Australian prima ballerina, Leanne Benjamin OBE leading a master class with students of the school, will feature past and present Tait awardees and promises to be a very special event.

So perhaps best to bookmark the Tait Performing Arts website and check regularly to discover the many wonderful and diverse events available in good old London town and here in Australia.

ENTRY IS FREE WIN ONE of Ten Double Passes Valid Nationally in Australia Enter Your NAME, POSTCODE & EMAIL to WIN Giveaway ENDS Friday February 26 at 5:00 pm The 2016 Alliance Française French Film Festival commences in March across seven cities in Australia, with the support of the French…