Take a bow Leo … which of course you did at the sumptuous post-performance bubbles and nibbles at the Henry Jones (I had an exquisite Tassie chardy. Yum! And those nibbles. So fresh; that mushroom pate … I think I’m going to die …).

This was a sensational night (I do hope I haven’t overstated that …) Really wonderful … and a further very obvious and very loud hint to the political and media dinosaurs that there is another Tasmania beyond the billowing clouds of forestry burn smoke which would have greeted mainland opera-goers if detouring in the Lear from Sydney over Smithton.

But give it its due … there was government backing via Tourism Tasmania (and Wotif Graeme Wood AM) for the Australian premiere of the Royal Opera House’s L’isola disabitata (Music by Joseph Haydn (1732-1809); Libretto by Pietro Metastasio (1698-1782). It was all over in a flash; at least from this rather ignorant observer’s view. A magical flash. Apparently it was 100 minutes with a 20-minute interval. It seemed much less.

Perhaps it was the set (perhaps it was pre-performance bubbles) … very post-industrial wastelandish with two or three of the four central characters moving in slow-mo in a slight haze (and exquisite lighting) outside a centre steel-ish disc with uneven upright rods around the sides; rods occasionally flicked about by one of the characters Enrico (baritone Changhan Lim) when in full voice.

A synopsis, ever so briefly: 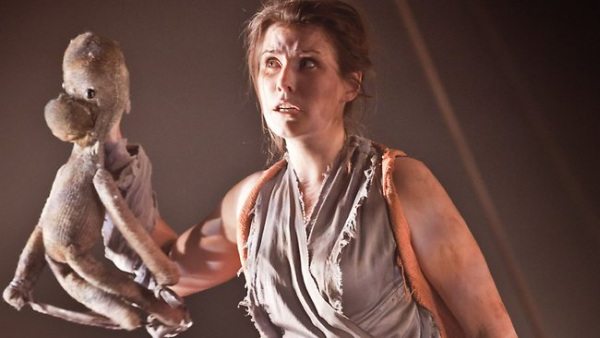 A deserted island in the mid-Atlantic. Costanza (melancholic Kiwi soprano Madeleine Pierard) is finishing an inscription describing her suicide. Voluptuous young sister Silvia is an exuberant and sensuous still-child-of-nature flitting hither and yon (Irish soprano Anna Devin). Costanza’s husband Gernando (English tenor Ed Lyon) and his fellow freed-slave mate Enrico come to the island after more than a decade to search for Costanza. Costanza thinks all those years ago he had deserted her and Silvia (he’d actually been captured by soldiers). Increasingly depressed she decides suicide is the only option left to her (bugger little sister!) and carves an inscription on a rock damning hubby. Gernanda sees it and decides to stab himself.

He is saved by Enrico in a rather dramatic knife-laden wrestle.

Cut to the chase Larry: Silvia and Enrico chance upon one another. It is love at First Fright. Constanza and Gernando are reunited … and the united voices at the end are glorious (in fact someone who knows has vowed to write to Joseph and insist the score be re-written to include more duets, trios and quintets …) Leo summed it all up best in the Henry Jones afterwards. And the normally steely Leo at one point became quite emotional describing his vision for, as he put it, one-last enduring festival.

The seed he said was sown in bicentennial 1988 when he and his ex-wife (who was there last night) saw (what was it La Boheme??? or Don Giovanni???) in the exquisite Georgian Theatre Royal – which by some miracle since 1834 has withstood the grasping maws of developers and the occasional indifference of government, to be the outstanding small theatre of the southern hemisphere.

Packed to the ornate ceiling its acoustic was on its best behaviour last night, even to this ignorant ghost. 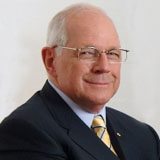 Leo praised all and sundry, and rightly so … from the exquisite performers directed by Rodula Gaitanou to the wonderful orchestra (in Leo’s words they could hold it with any in Europe). And he gave special thanks to his co-host Jarrod Carland.

And, last night was just the beginning …

Hobart Baroque runs to April 20 with wondrous attractions including David Hansen with the Orchestra of the Antipodes, Latitude 37/Sonnerie, Jane Edwards and the MONA masterpieces (David Walsh, long hair back and dressed rather post-punkish, and Kirsha were taking bubbles):

*Larry’s Ghost, although ephemeral, is known to the Editor …

“Take a Bow” was first published Saturday April 13 in the TasmanianTimes.com, guided by its editor Lindsay Tuffin.

It is a cornerstone for free speech in the Australian island state of Tasmania, which lurks with intent joyously at the bottom of the world.

Lyrical Greek poet Pindar (522–443 BC) tells us the ‘superman’ of Greek mythology Heracles laid out Olympia as an act of homage. It was about celebrating the success of the twelve labours the Gods had set him. He cleared the site associated with the earth Goddess Ge 15k inland from…