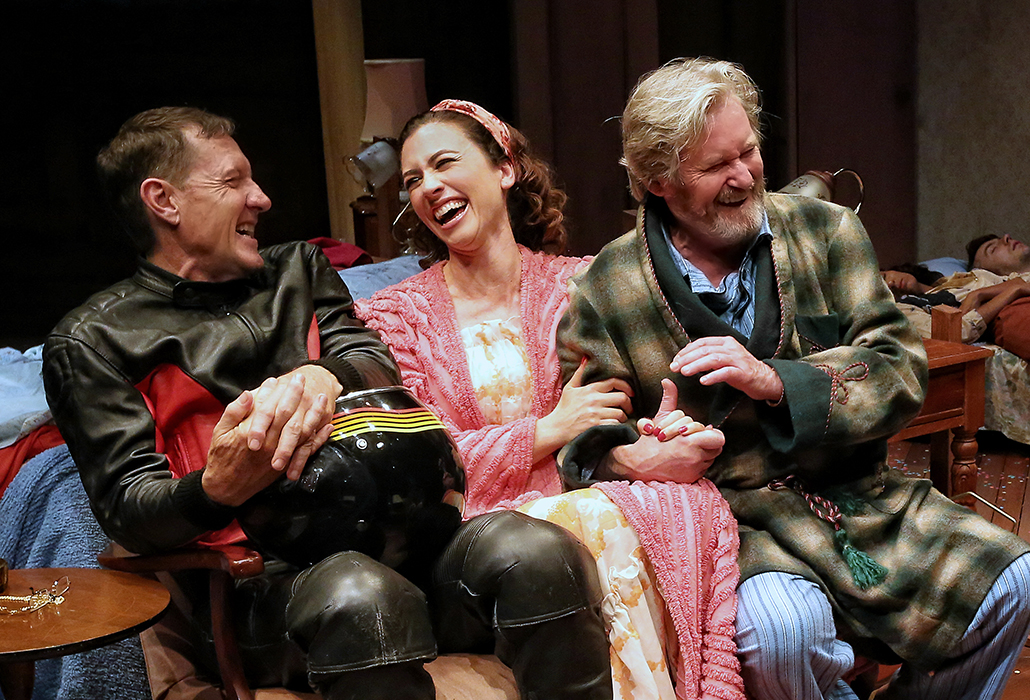 Taking Steps is a comical romp across three floors of a neglected and haunted Victorian mansion. The hilarious scenes of this farce occur over one chaotic night and leave the audience relaxed and light hearted from the laughter and entertainment of uproariously funny events, and outrageous mix ups and misunderstandings.

2018 will mark Alan Ayckbourn’s 57th year as a theatre director and 59th as a playwright. In 2016 he received the Oxford Literary Festival’s Honorary Fellowship and recently has been inducted into America’s Hall of Fame. He was presented the 2010 Critic’s Circle Award for Services to the Arts and became the first British playwright to receive both Olivier and Tony Special Lifetime Achievement Awards. He was knighted in 1997 for services to the theatre. 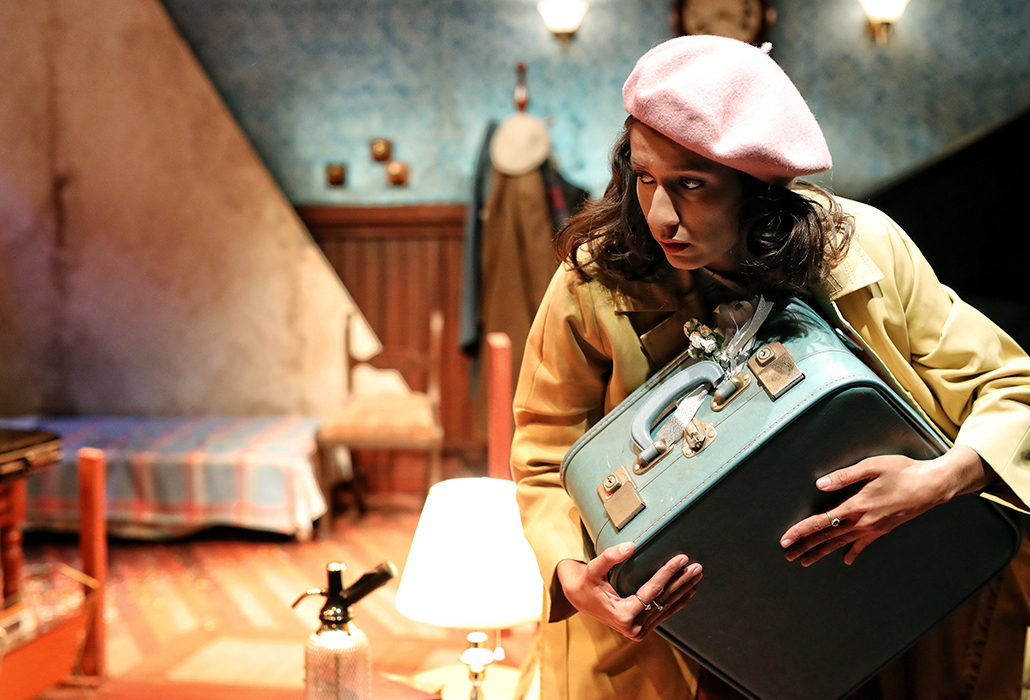 His play Taking Steps now on at the Ensemble Theatre Kirribilli, Sydney was first performed to critical acclaim at the Stephen Joseph Theatre in the Round, Scarborough in 1979. Ayckbourn is a ‘social writer’ who is able to balance the fragility of the characters and the humorous situational circumstances with impeccable dialogue, mindboggling actions and an amusingly absurd and far-fetched plot.

Set Designer Anna Gardiner has crafted the collapsing house, a metaphor for the unhinging relationships and agitated personalities, with the haphazard style and shabby décor that mirrors the motives and states of minds of the characters.

The clever construction of hand rails and changing timber floor patterns is suggestive of the three floors of this dilapidated mansion. The eclectic mix of furniture and light fittings accentuates the turmoil and bedlam within the play. The dull shades of the soft furnishings are faded symbols of the evolving misery, suppression and constraints within the characters of the play. 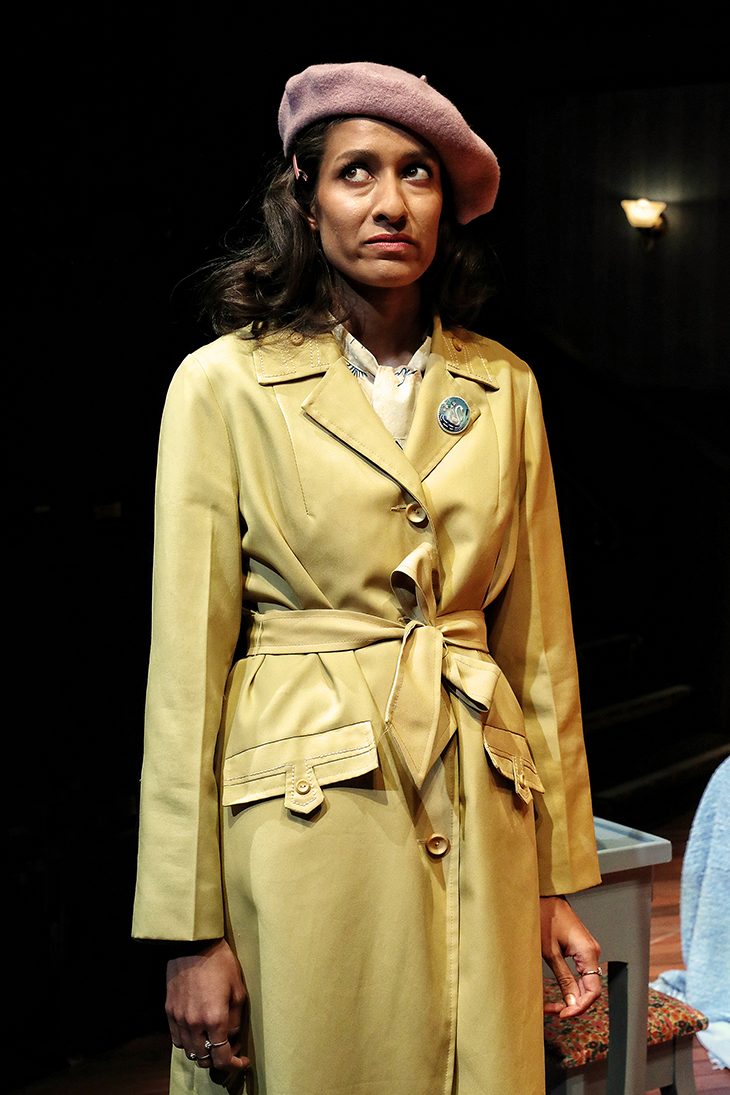 Mark Kilmurry is challenged in his direction of the actors by the configuration of the mansion and the notion of the illusion of three distinct levels.

In this production he has successfully defined the levels through the exaggerated stepping by the cast on the imaginary staircase.

He has elicited fine accurate and consistent performances from the entire ensemble.

Their insightful and convincing acting delivers the individual traits, emotions and movements of their characters with a sincerity and believability that illuminates the stage and breathes life into the playwright’s words.

In the opening scene Mark (Simon London) is appalled when he reads the farewell letter his sister Elizabeth (Christa Nicola) has written to Roland (Peter Kowitz), her rich successful husband of three months.

The letter is littered with side-splitting malapropisms and the mood of the play is firmly established. Mark is distraught as his selfish plans for purchasing a fishing shop will be thwarted if Elizabeth leaves Roland.

Mark is also preoccupied with his relationship difficulties. Kitty (Emma Harvie) left him on their honeymoon and is about to return after tumultuous experiences in London, some of a suspicious nature. He irrationally expects to rekindle the romance and pressure Kitty into surrendering to his aspirations and desires. 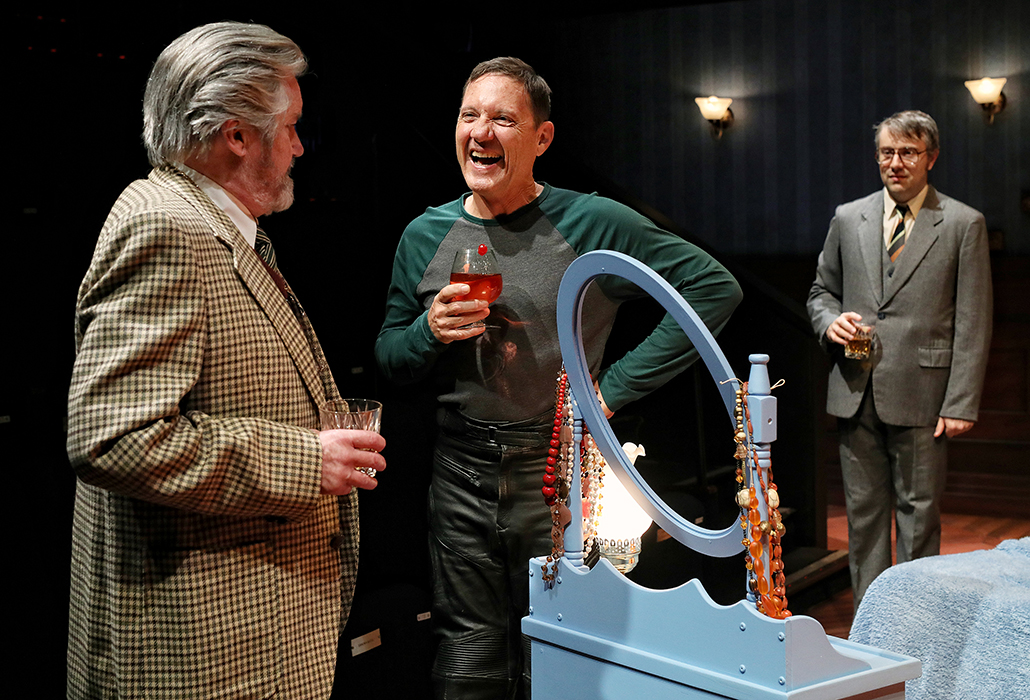 Meanwhile Roland’s intention is to buy The Pines from a local dodgy builder Leslie Bainbridge (Andrew Tighe) for Elizabeth and install her as ‘lady of the manner.’ Unfortunately Elizabeth, an ex-dancer thinks The Pines is a ‘white elephant’ with ‘no music about it’.

She longs for her freedom and is desperate to escape. She also foolishly believes in an exaggerated sense of her own talent and importance.

Tristram Crab (Drew Livingston) who is a very drab, babbling tongue-twisted and extremely nervous solicitor appears to complete the sale. His awkwardness, shyness and vulnerability are unexpectedly and irreverently rewarded throughout the play. His outward demeanour bellies his inherent decency and highly principled moral code. 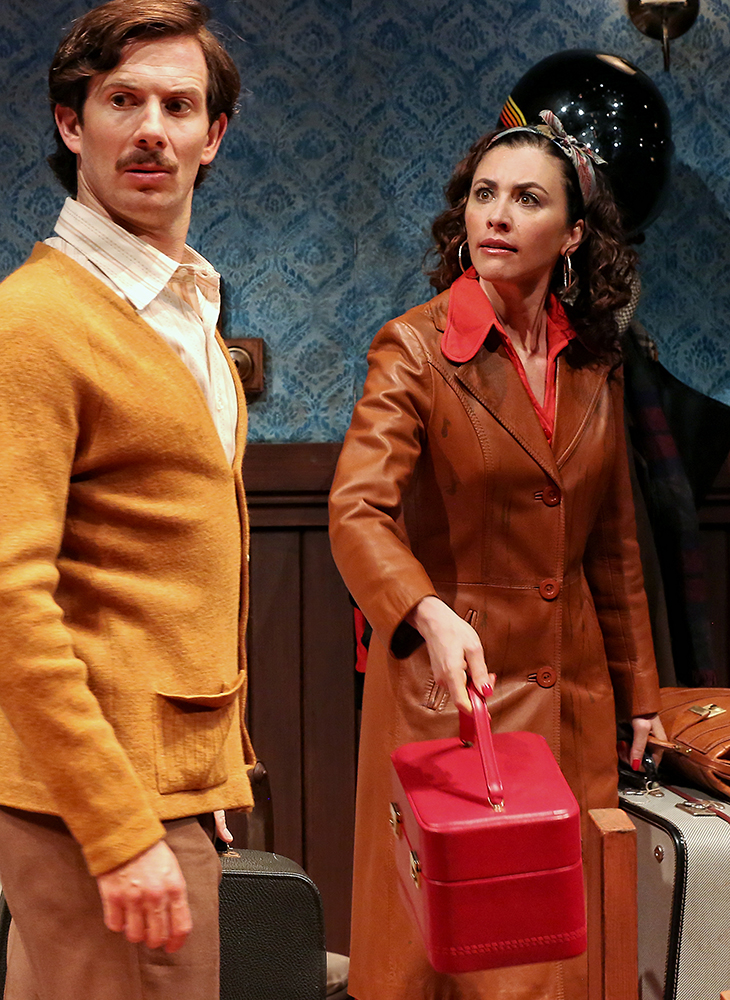 Roland is a story teller and fond of alcoholic beverages which he generously shares with both Leslie and Tristram as they take a tour of the crumbling mansion and discuss its history including the ghost Scarlet Lucy. Leslie is anxious and impatient to sign the deal to ensure his own financial solvency.

Kitty deadpan and silent enters with Mark. Their reunion is tempered by her withdrawal and Mark’s monotonous presence and relentless pressure.

With five of the characters under the one roof the sleeping arrangements create situational comedy at its very best.

The audience is invited to ponder on whether the characters will ‘take steps’ to make choices that will change them and alter their futures.

Dilemmas, decisions and final outcomes are deliciously interspersed with letters, ghosts, pills, an assortment of beds and an attic cupboard. 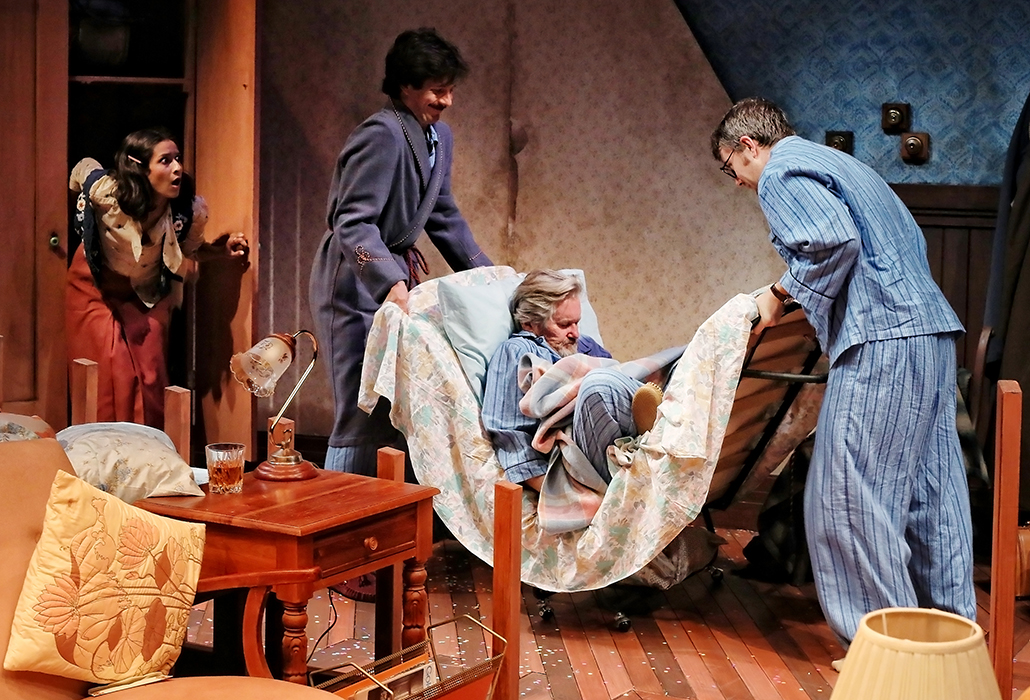 The brash confident Roland is underpinned with a surprising vulnerability that Peter Kowitz has absorbed and delivered with assurance and warmth. Shrewd scheming Leslie is convincingly conveyed by Andrew Tighe as he cleverly employs his raucous and contagious laugh to distract the buyer and clinch the sale.

Simon London plays Mark, a total bore who puts people to sleep. In his seemingly effortless timing he projects a monotonous but troubled persona intuitively edged with personal and professionally failures.

The erratic and pretentious Elizabeth is flawlessly portrayed by Christa Nicola. She depicts the tempestuous character with wit and frivolity, thoroughly aware of the superficial and vacillation embedded in Elizabeth’s personality. 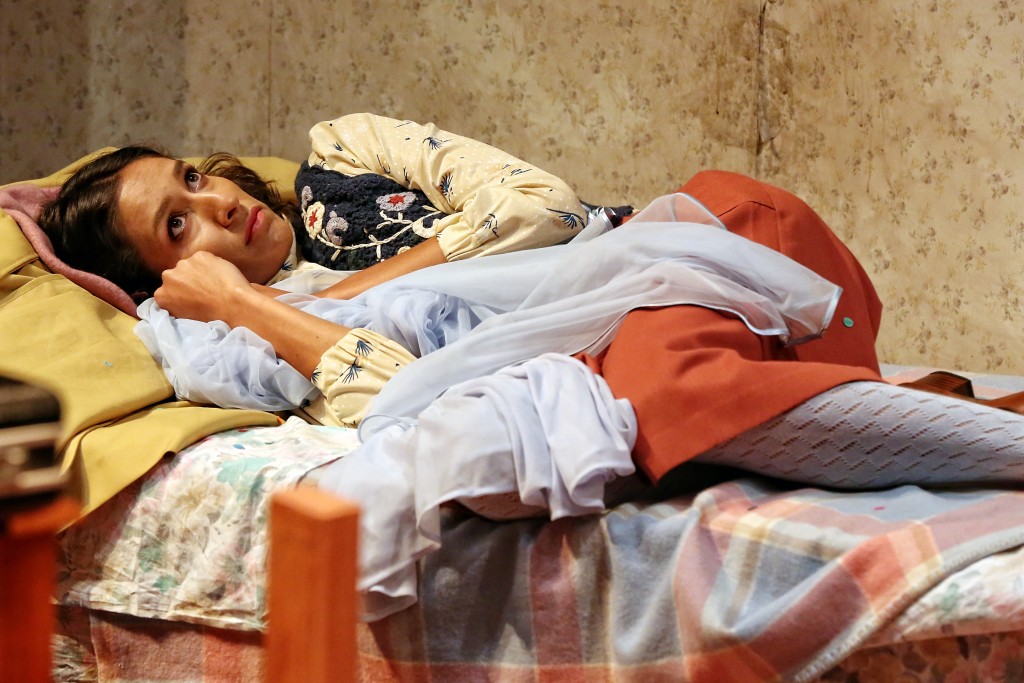 The painfully shy and inarticulate Kitty struggles to find her place and escape the inevitability of a demeaning life with Mark. Emma Harvie sensitively imparts the anguish and the courage that develops.

Drew Livingston shapes the bewilderment of Tristram and embraces the comic nuances of facial expressions, babbling speech, curious misunderstandings and mix-ups with finesse. Livingston is a catalyst for the success of the show and his performance is hilarious. 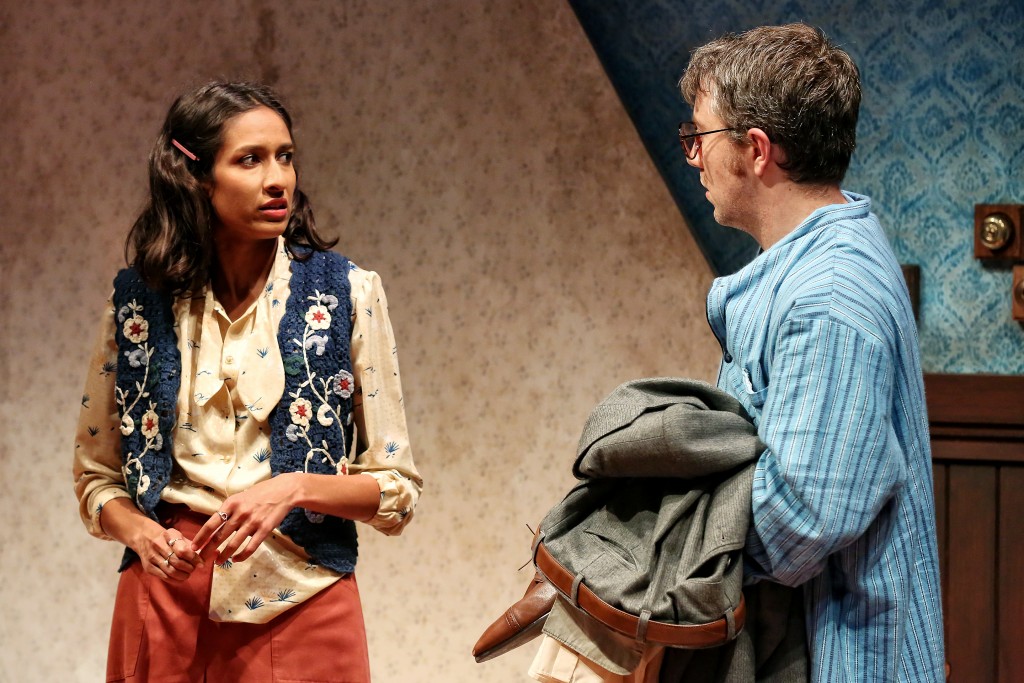 Taking Steps is just the right medicine for the festive season!

If it can be said that if a positive aspect has come out of all the flooding in Australia this summer it would have to be about connecting people at local, state and national levels. In every aspect, harnessing the capacity and creativity of the community to deal with this unbelievable crisis together has produced amazing results.