As a tribute to music both contemporary and classic, the Australian Chamber Orchestra (ACO) led by Australia’s National Living Treasure Richard Tognetti AO its Artistic Director and Lead Violinist played an exquisite array of music in the main gallery of the The TarraWarra Museum of Art on Saturday 8th March for the 3rd annual TarraWarra Music Festival 2015.

Those arriving from weekend accommodation nearby, or just up from Melbourne for the day, wound their way through the picturesque Yarra Valley in Victoria, where the leaves on the trees were beginning to change hue against row upon row of hill climbing grape vines with protective covering in place.

Festivals with their relaxed informality provide an ambiance like no other. Sweeping through the great gates of the Tarrawarra Estate, which specializes in a select group of Chardonnay and Pinot Noir wines and onto the grand driveway, there were a never-ending stream of cars with happy laughing chattering people.

Once inside guests were guided into a nearby car park where a courtesy bus awaited to take them up the steep hill to the outstanding art, design and style conscious contemporary TarraWarra Museum of Art with its adjacent restaurant and Estate tasting room. I must say a tasting of the Reserve Pinot Noir slid silkily down my throat, both rich and resonant. It proved a prelude for the sublime music to come. 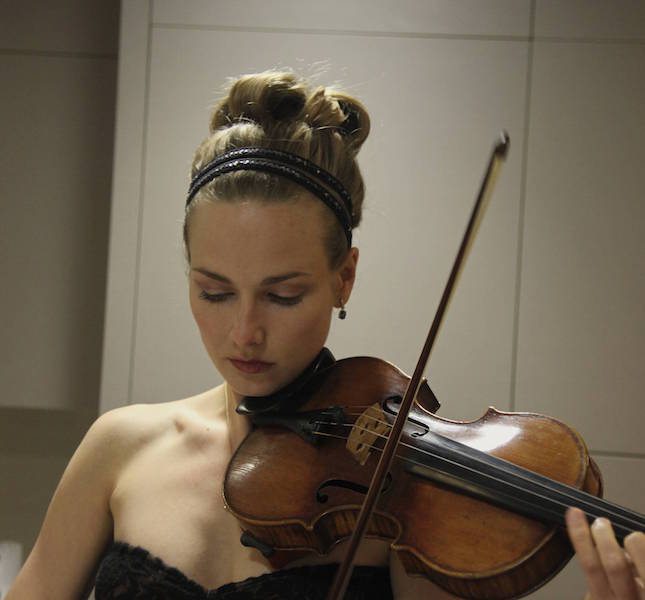 The ACO are celebrating 40 years of music making in Australia in 2015. The players have established an international reputation for excellence over these last four decades and in this extraordinary setting you could not help but think what an atmospheric way to enjoy and share glorious music with friends.

For this the opening concert of the festival the day was cool and cloudy, the usually uncovered terrace with its stunning view over the valley to the backdrop of mountains beyond, covered by a large transparent marquee.

Inside in a relaxed informal setting, everyone was able to stay out of the light cool wind blowing announcing that autumn had arrived. In a convivial atmosphere, they were all enjoying conversation with new and old friends accompanied by a glass of excellent juice from the vine with the light luncheon provided.

Those I spoke to said it was their idea of a perfect Aussie Saturday afternoon – good company, fine food, wine and simply glorious music in an outstanding setting in the countryside. The musical program A Sculthorpe Homage paid tribute, as ACO Artistic Director Richard Tognetti reminded us, to the most respected and revered of all Australian composers representing contemporary times, the late Peter Sculthorpe (1929-2014) who was also one of Australia’s great ‘distinctive voices’.

The TarraWarra Museum of Art had on display three exhibitions of works by artists Ian Fairweather: The Drunken Buddha in the main gallery where we were seated, Tony Tuckson: Paintings and Drawings and Gosia Wlodarczack: Found in Translation.

Tognetti had chosen the program of music they played to compliment the art and pervading ambiance, which was all about striking spaces, tonal colour, contemporary character as well as music and cultural development.

The Australian Chamber Orchestra were up close and personal and, at the top of their form.

The Terrace of the TarraWarra Museum of Art without a marquee, overlooking the glorious Yarra Valley

This opening concert for 200 people was booked out, so I felt indeed privileged to have secured a seat and was instantly immersed in the glorious music from the first note. It was so special to be sitting in a ‘chamber’ where you could reach out and almost touch them all, and the acoustic was glorious.

Inspiring collectively, there was freshness about the performance of the musicians assembled. Perhaps it was partly inspired by the surroundings and because they were playing such a superb program of music to old friends, which was what the crowd certainly seemed to be.

Tognetti juxtaposed Sculthorpe’s work against a selection of fine concertos by the European master of ‘Baroque’ string composition, Italian composer Antonio Vivaldi (16789-1741. The result was an invigorating and exceedingly stylish concert of the ACO magical kind.

Have loved the ACO for decades now, was a subscriber and supporter BT and AT – before and after Tognetti, who arrived in 1989.

As I hadn’t been to a concert for a while though I felt excited, on the edge of my seat and perhaps full of an expectation, which they certainly exceeded in spades and then some. 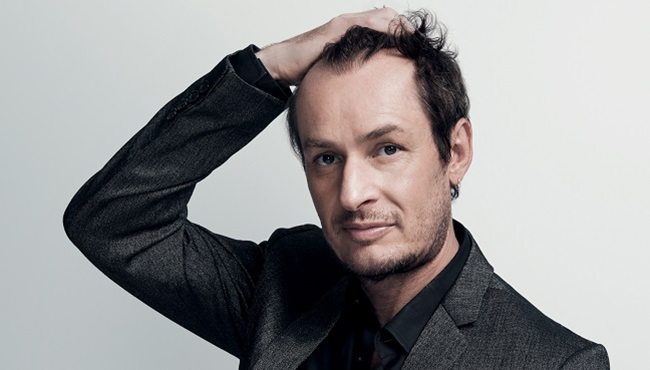 Dating myself when I say I remember Richard Tognetti (1965- ) back in the day when he was a shy very sensitive young man hailing from Wollongong via Europe. He was expanding his studies when beckoned home to step on stage and become their leader, taking it and the early music lovers of Sydney by storm.

His skill with the violin was mesmerizing then, and still is now. Classical music in Australia would never be the same again once he arrived and chamber music had found a champion.

In only a short time a splendid team of musicians and administrators had gathered around him and within a decade the New York Times was describing them as the ‘best chamber orchestra on earth’.

This opening concert of this festival more than proved their point.

These days Tognetti who is more than mesmerizing, plays a very fine 1743 “Carrodus” violin made by Giuseppe Guarneri del Gesù. It is one of the most famous in existence.

The shy sensitive man is still there, but he has learned how to communicate with his audience in his modest way, and so continues to win hearts. He was not at all phased when a string came loose, par for the course for an old pro like him now, and with an old instrument, to be expected. Momentarily he had to leave the stage to fix it.

Such is the fine tuning and respect Richard Tognetti enjoys with his team of players, who are all chosen for their own rare genius, his assistant lead violin Satu Vanska just quietly stepped into the breach and the orchestra played on.

When he returned it was all just as flawless as they dropped back and let him lead again. There was no fuss.

The real attribute of any leader is to embolden others and not seek to control. He’s a natural.

Tognetti and his colleagues compliment each other in a matchless style of grace poise and joie de vivre. They are so dynamic it makes your heart sing. It certainly did mine.

When he was young Tognetti used to mark time with his right leg and there it was on Saturday, marking time again revealing that more than 25 years on he still not only retains his youthful vigour but also his passion for music and its performance.

I remember the first time the orchestra played music by Sculthorpe who came on board as a composer from the beginning and it was in such a direct contrast to the classical repertoire diet Australians had enjoyed to that point.

Now many regard it as an old friend, with its intrinsic links to the dreamtime.

Through his prolific works Sculthorpe gave Australian’s a unique sense of self, one reflected so well in his music, telling tales of both its awesome landscape and its spirit.

His Djilile for string orchestra, which followed a very spirited Vivaldi Concerto for strings and Continuo in C major, was indeed captivating. I loved it.

His passion for Australia’s natural landscape and enormous regard and respect for its indigenous community informed Sculthorpe’s choices. The sounds heard were like those experienced while sitting by a campfire at night down by a billabong. He famously said “While on the surface it might appear to be painting a picture, I mean what I’m really doing … is seeking the sacred in nature,” Sculthorpe said. He certainly achieved that.

Representing further times past were the always invigorating and inspiring works of Italian composer Antonio Vivaldi (1653-1713) whose most famous work the ‘four seasons’ has defined many an orchestra and chamber group over the centuries since it was composed.

Just as the ancient Greek God of music Apollo’s lyre painted a picture of spring water as an essential luxury on Mt Parnassus so did Vivaldi’s paint the landscape of Italy with its ‘fatal gift of beauty’, which caused the romantic poet Lord Byron to comment ‘Oh Italia, all the orphans of the heart must turn to thee’.

In this concert music both sacred and secular were infused as one and Vivaldi and Sculthorpe’s common threads woven with vivacity and warmth.

There were no boundaries to cross only harmonies and beauteous notes that swept you along in a cloud of creativity, beauty and grace combined.

Vivaldi was revisited with fresh intent, through his masterful Violin Concerto in A Minor featuring Tognetti on violin. Bliss

The afternoon ended with his Concerto in D minor where the expression arising from the cello of principal cellist Timo-Veikko Valve was truly exquisite. Goodness, do I love the cello.

Tognetti believes ‘the relationship between the music of the late Peter Sculthorpe and composers of the Baroque is subtle but strong’. Like Bach and Handel, Corelli and Vivaldi, Sculthorpe had an instinctive feel for the glories of a string ensemble…’

The soul of the Baroque era in music is not static, it is consummated in marvellous music that reveals all by its purity. It certainly reflected all that was good about life at the time, especially an awakening love of nature, sweeping all before it as does the Australian Chamber Orchestra under the direction of Richard Tognetti.

Ten out of ten, this exquisite team of players were certainly at a pinnacle of perfection in their playing for the opening concert for the TarraWarra Music Festival, 2015. Was left wishing that I could be there for the rest.

Making the Australian Quilt: 1800–1950 a show at NGV Australia provides an insight into the skills of men & women narrating Australia’s history stitch by stitch