The TarraWarra Museum of Art (TWMA) first opened on December 3, 2003. On the weekend of December the 7th and 8th, 2013 they will mark their tenth anniversary by throwing open the doors to the public for free.

To mark the occasion, TWMA Director, Victoria Lynn and her dedicated team, in conjunction with the Healesville Sanctuary , which is a bushland haven for Australian wildlife, have planned a weekend of celebration.

There will be a variety of public programs with the focus on special events for families.

First time visitors and those who have visited TWMA wonderful exhibitions of modern and contemporary art from both Australia and abroad, won’t be disappointed. There is something for everyone at the TWMA anniversary weekend.

It’s seriously cool that TarraWarra is having a birthday and we get the presents, a wonderful program of events.

You can start your visit by walking the TarraWarra Trail – follow a specially laid trail all the way up the green hill to the museum’s galleries.

Learn about the indigenous Wurundjeri people, and European history of the museum’s landscape. 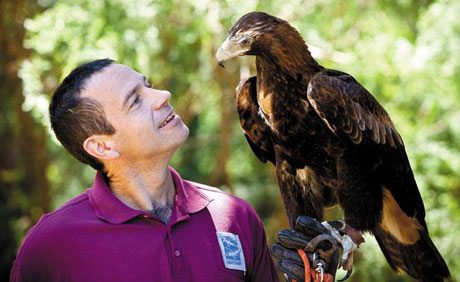 Don’t be surprised if you meet Bunjil, a wedge-tailed eagle along the trail. The living embodiment of the Wurundjeri creator spirit, Bunjil and his keeper will visit from Healesville Sanctuary for the weekend celebration.

It’s a great opportunity for kids and grownups to get a look at this majestic native bird.

TarraWarra staff are hoping Bunjil, in keeping with his role of spirit of the valley, will bring blue skies and sun to the open days.

Visitors that walk the TarraWarra Trail will have the chance to win a prize sponsored by the Healesville Hotel. The Trail is open 11am – 5pm each day – Bunjil and his keeper would like to make your acquaintance between 12 and 2.30pm, free, (weather permitting) After hiking the trail, spend a moment to look at the view from the top of the hill – magical, then wander into the spacious light filled museum gallery spaces.

Entry to the museum’s two current exhibitions Russell Drysdale: Defining the Modern Australian Landscape and Future Memorials are free of charge throughout the anniversary weekend. Taking its cue from the proximity of TWMA to the site of Coranderrk Aboriginal Station (located along the Yarra River a few kilometres upstream from the Museum), Future Memorials explores the effects of colonialism and seeks new ways to understand and renew the relationship between these histories and the present.

The exhibition coincides with the 150th anniversary year of Coranderrk which was originally granted to Wurundjeri people, and other dispossessed Victorian Aboriginal people, in 1863.

Coranderrk Station became a thriving and self-sufficient economic community and a power base for Aboriginal self-organisation and political advocacy in the late 19th century.

A part of our history that not many Australians know about, Future Memorials recognises not only the suffering but the achievements of Victoria’s indigenous people. 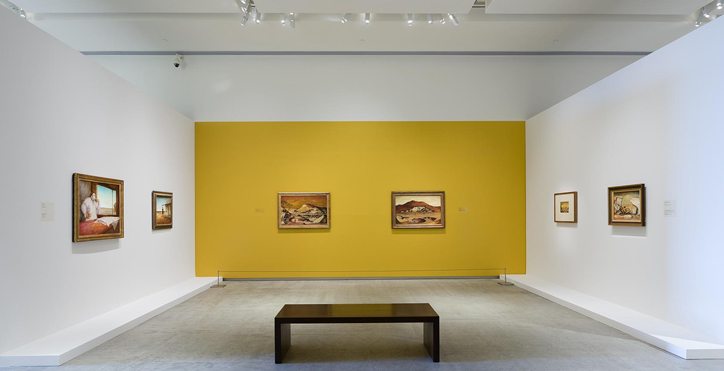 Russell Drysdale: Defining the Modern Australian Landscape exhibition is made up of over 35 of this iconic artist’s paintings.

Featuring a selection of well known works it also displays paintings not often seen in public exhibitions, some of which convey the artist’s deep concern for the dispossession of Aboriginal peoples.

Sir Russell Drysdale’s name, writ large in the annals of Australian art, the TarraWarra exhibition uses photographs, newspaper articles and documentary materials to reveal a man with a deep and continuing commitment to the Australian environment. Drysdale, a man seemingly ahead of his time, not only shaped perceptions of the national landscape, he used visual art to pose questions about land and environment – disturbing questions that our society is only now confronting. Having visited and reviewed the exhibition for the Circle it was an extraordinary experience to view Drysdale’s work.

Part of the Australian psyche, the form and colour of his paintings invoked emotions ranging from sadness at the degradation of outback landscapes to feelings of wonderment at Drysdale’s skill in capturing characters and locations in images that reflect the beauty, harshness and isolation of a wide brown country.

Find Russell Drysdale’s painting of a country town public hotel, Murphy’s 1947, for a chance to go into the draw to win a family overnight stay in 2 x Queen Suites at the Healesville Hotel and a $100 meal voucher for a classic counter tea at the iconic hotel’s front bar. Healesville Sanctuary recently unveiled a statue of the great Wurundjeri leader William Barak, and have created a new indigenous trail for visitors to the Sanctuary. Walking the “Spirit of the Land” trail led by Murrundindi, a Wurundjeri Elder will be free. The trail will be launched as part of TWMA’s open weekend.

The Sanctuary is sited on land which was formerly part of the Coranderrk Aboriginal Station; an area integral to TWMA’s Future Memorials exhibition. The Sanctuary wants to encourage visitors to walk on the land there with a greater understanding of the history of the area, by taking a pilgrimage from TWMA to Healesville Sanctuary, your footsteps will echo the steps of the Aboriginal people who lived and worked in the Yarra Valley. TWMA and Healesville Sanctuary combining to offer families a great day out over the coming holiday period is an innovative initiative – wish more institutions would get involved in helping families have fun at an affordable cost while they learn about Australian history. Victoria Lynn, TWMA’s Director and the driving force behind the museum’s exhibitions and events, found time in her busy day to give me some background on herself, the open weekend and her future plans for TWMA. I asked Victoria these questions:

A snapshot of your life before TarraWarra:

Apart, we are together was a finalist in the ALICE Awards in the category of ‘Biennial’, where it also won the ‘people’s choice’ award.

In 2010 Victoria I curated The Trickster, Gyeonggi Museum of Modern Art, Korea, 2010.

In 2009 I was the curator of Double Take, the Anne Landa Award for Video and New Media Arts, Art Gallery of NSW, Sydney.

In 2007 I curated turbulence for the 3rd Auckland Triennial; Julie Rrap: Body Double, Museum of Contemporary Art, Sydney and Regarding Fear and Hope at Monash University Museum of Art, Melbourne.  My previous roles have included Director, Creative Development, Australian Centre for the Moving Image, Melbourne.

Prior to that I also worked for a number of years as the Curator of Contemporary Art at the Art Gallery of NSW, Sydney. And, I was Australian Commissioner for the Venice Biennale in 2004, and Chair of the Visual Arts Board of the Australia Council from 2001 – 2004.

The motivation behind TarraWarra’s open day:

We are turning ten! And we want audiences to come and help us celebrate. There will be music, children’s activities, pop-up talks about Russell Drysdale and casual food available for purchase.

The vision for and upcoming events at TarraWarra:

At TarraWarra Museum of Art the aim is to consider the past through the filter of the present by providing remarkable exhibitions for a remarkable destination. Our aim is to foster knowledgeable, passionate audiences by promoting access to modern and contemporary art; we aim to provide an original contribution to the field of art and to ensure and encourage all our visitors to incorporate the visual arts into their lives through repeated visits to the museum. In 2014 we will present our TarraWarra Biennial, which features contemporary Australian art and in early April we will present the TarraWarra Festival, featuring the Australian Chamber Orchestra.

Victoria Lynn and her team have worked hard to ensure TarraWarra’s birthday party is a success. It’s going to be huge – you don’t want to miss it. Below are all the details – see you there.

Learn more about some selected works of Russell Drysdale by listening in on one of the free pop up short talks, taking place on the hour every hour, Saturday and Sunday from 12 noon.

Children and families are invited to come and polish up on their bowling and batting skills, led by coaches from the historic Healesville Cricket Club which turns 150 years of age this year. Be inspired by Russell Drysdale’s rarely seen iconic painting The Cricketers 1948, currently on special loan at TWMA from a private collection.

There is an on-site restaurant at TarraWarra – good food, good coffee and wine. Eat in or out: enjoy lunch and the views while the kids have fun playing on TWMA’s grassy green slopes. 12 – 4pm each day

Led by artist Sarah Metzner, children will learn how to make their own sculpture, inspired by Clement Meadmore’s massive Cor-ten steel sculpture Awakening 1968, which has recently been gifted to TWMA. Bookings Required

FREE ENTRY to the museum all weekend

Palace Cinemas in Australia will present a feast of opera and ballet, exclusively on screen 30 Oct 2015 until 3 August 2016 – direct from Europe’s finest stages