Hooray! Hooray! The end of the world has been postponed! 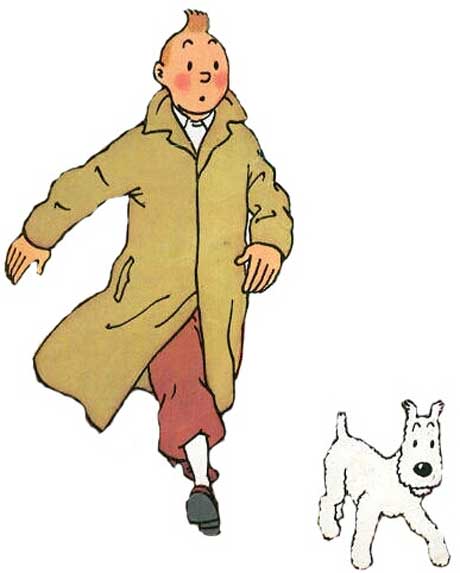 At last, the adventures of Tintin are coming to the screen starring Billy Eliot himself, Jamie Bell. It’s also great that those iconic filmmakers Peter Jackson and Steven Spielberg have combined their talents to bring The Adventures of Tintin: The Secret of the Unicorn to the screen. In France, Le Figaro Magazine has already called The Adventures of Tintin “the most anticipated movie event of 2011.” Forbes Magazines reported that on the 13th October, movie journalists in Tintin’s home city were given a sneak preview. They had their knives sharpened just in case it turned out that its producers and director had desecrated, perhaps Europe’s greatest cartoon character ever. But apparently, by the end of the movie, the critics were as beguiled as Tintin’s sidekick the estimable Captain Haddock by a bottle of whiskey and the ‘ever-bickering linguistic groups in this culturally divided nation had found a rare issue on which they could finally agree’. The movie has its premiere in Brussels and Paris on October 22nd 2011 and will be released over the Christmas holiday season everywhere else. My three sons will be cheering wildly because Tintin was such a great favourite growing up. Surely one of the most engaging of all the comic book characters they enjoyed reading.

Adventure has a new name, and it starts with A for Art. 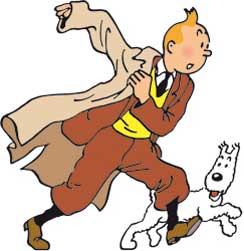 Brilliantly drawn by Georges Prosper Remi (1907-1983, known as Hergé, Tintin’s creator is today considered one of the most influential drawing comic book artists of the 20th century. His feature character Tintin, with his characteristic tuft of blonde hair, always seems to act on his own volition, without a boss or co-workers. And while he may not have a surname, Tintin’s hairstyle will surely catch on. Steven Spielberg has always claimed that Hergé and his characters inspired his Indiana Jones adventure movies, so there is sure to be a ‘spot the reference’ dialogue that will follow the launch of this exciting movie project. Tintin was the boy next door who always took heroic action to save the day. A young Belgian reporter in a turbulent time in history Tintin whether wittingly or willingly was hell bent on saving the world, mostly from itself. By thunder, the trailer for the movie reveals the creators have perfectly captured Hergé’s superb linear style of drawing, which clarified his cast of characters so well. His was an almost child-like manner, one that combined great movement with great subtlety.

Watch the You Tube Official HD Trailer and then read on

The movie script has been adapted from Hergé’s originals Le secret de la licorne and Le trésor de Rackham Le Rouge. Quietly unassuming Hergé dabbled in painting and collected modern art towards the end of his life. One can suppose he would have been both delighted and amused at seeing his boy with the stand up cowlick extraordinaire and his clever dog on screen in 3D. Translated into more than 80 languages, the stories of Tintin transcend the barriers of time, race, culture and creed. He is an imaginary hero of a world that is all too real. Hergé based many of his narratives freely on the actual historical events of his time. Full of satire, mystery, fantasy, history and politics Tintin’s misadventures in the world of investigative journalism were aided by his faithful fox terrier Milou, (Snowy). Together they become involved in sensitive cultural and political issues, including World War II. Along the way they confront mad scientists, spiteful spies and vexatious villains, even on the moon.

Captain Haddock, a multi millionaire Merchant Marine Captain, is Tintin’s seafaring offsider. His many blasphemies and curses are now almost considered classic. His colourful vocabulary of insults skirt around the issue of using swear words, which would not be acceptable because the comic books were aimed at children and teenagers who loved them. Haddock’s expletives were simply wonderful nonsense, allowing him to let off steam or get over his anger without offending others. In that respect they became a lesson in life.

Spielberg has combined the two parts of this amazing adventure story, which was serialized from 11th June 1942 to 14th January 1943 in the Belgian newspaper Le Soir in the movie The Adventures of Tintin: The Secret of the Unicorn. It avoided politics and instead was a true adventure story, with Tintin and his friend Captain Haddock looking for the hidden treasure of the pirate Red Rackham. 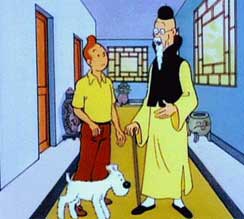 The Secret of The Unicorn is in a model of a ship that has a legendary Unicorn as its masthead. Hergé actually used a ship named Le Brilliant as the basis for the design of Sir Francis Haddock’s fictional vessel and a real pirate, John Rackham, as captain of the ship that had women pirates as part of the crew.

As he progressed Tintin as his hero of everyman, Hergé did not just perpetuate prejudiced perceptions or always fall back on European stereotypes. In The Blue Lotus, which many consider Hergé’s masterpiece, he places the culture of China into historical context and respects its contribution to the world and its development. Tintin uses his courage to restore happiness to Mr Wang’s Noble House, proving that east and west could work well together if only they tried.

‘deep down, my only international rival is Tintin and, … the National Assembly was preparing a debate ‘Tintin: Is he from the Left or from the Right’. 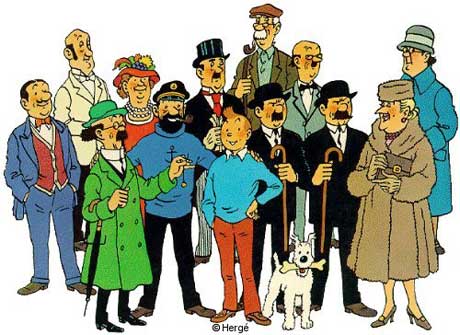 Thankfully Tintin was apolitical. Hergé was particularly skilled at making his hero always neutral, while providing plausible plots that could be solved logically. They may have been sometimes predictable but they also featured a great cast of fatally flawed, but very endearing protagonists. They drew the audience in every time with their combined charm and kept them captivated all the way to the last square on the page.

This assorted motley crew helped Tintin overcome whatever predicament he found himself in. The most popular were the cynical, grumpy but loveable ‘blistering barnacles’ Captain Haddock himself together with the hearing impaired, but highly intelligent Professor Tournesol (Calculus). He was always generous to a fault, but due to his disability frequently misunderstood situations with hilarious results.

Then there were Thomson and Thompson the twin bumbling detectives who could only be told apart by the style of their moustaches. They provide comic relief through their incompetence. Actually based on Herge’s father and uncle they were identical twins who wore matching bowler hats.

Iconic American artist Andy Warhol was quoted in 1999 as saying ‘Hergé has influenced my work in the same way as Walt Disney’. ‘For me’ he said, ‘Hergé was more than a comic strip artist’. Warhol utilized the drawing style developed by Hergé, which is known internationally in the world of art as the ‘linge claire’ technique.

He also made a series of paintings commissioned by Hergé with himself as subject. An exhibition at Paris’s prestigious Pompidou Centre in 2006 put forward the idea of Hergé as an artist. And as it is one of the world’s most iconic modern art institutes it made a huge impact and caused controversy. Laurent Le Bon Co-curator of “Hergé” the exhibition said at the time to the reporter from The Independent ‘the importance of this show is that we are showing the work of Hergé in the same building as Matisse and Picasso’. 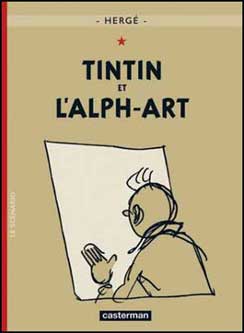 Hergé was a wonderful storyteller in pictures but there will be always those who dispute his claim to be an ‘artist’. Is it reasonable to separate the pictures from the stories and call them art? As The Independent reported the minimalist French artist Jean-Pierre Raynaud, who was a friend of Hergé, believes such a claim can be justified. “He has a precision of the kind I love in Mondrian. He has the artistic economy that you find in Matisse’s drawings. He perfectly crystallises what he wants to say and, as a result, his work never ages.”

Born 75 years ago Tintin has lived in the imagination of millions of people as he traveled widely having adventures that were both heart-warming and spontaneous. It’s ironic that his last adventure, Tintin et l’alph-art’ was played out in the world of modern art, although it remained unfinished at its creator’s death. The 2010 edition contains notes newly found in a French bank archive and they are a testimony to Hergé’s narrative and graphic talent.

Hergé’s legacy is an enduring form of entertainment, set in an exotic and action packed environment, one that people of all ages relate to.

You know Tintin there are millions and millions of stars. What’s one more or less?