At Melbourne there is a great deal of innovation going on in regard to cycling, which is supported by the city, local and state governments and the citizens. The latest initiative is the Melbourne Bike Share, a new form of public transport, designed for short trips across the city. Simply purchase a subscription that suits you, take a bike when you need it and then return it to one of the fifty (50) bike stations that are well situated throughout the city streets. You can either bring your own helmet to town with you, or you can purchase a $5 helmet from a nearby 7-Eleven store as well as other participating retail outlets. Annual subscribers to Melbourne Bike Share can also purchase one at a discount. With its accessible grid system, delightful laneways and byways, beautiful parks and relatively flat riding surfaces, the places you can now explore by bicycle at Melbourne are endless.

There are also cycling tours that you can do purely for pleasure and leisure. Whether your passion is food, art, sport or shopping, there is sure to be something that interests you. These work well with the great anti-Lycra brigade cycling leisure movement at Melbourne, which is already established. It is all about people who want to ride bicycles, often with their children or their pets in a basket or tow, and without wearing specialized gear. ‘Wheels turn very slowly as anti-Lycra brigade cruises gently into town‘ said one headline in The Age.  The article went on to talk about cyclists who ride for the sheer enjoyment of it. They are interested in health, lifestyle, and also getting safely to a destination by riding slowly and enjoying the outing. They are also anti-lycra, those who have made it known quite clearly that they do not want to be dressed as if they are training to be in le Tour de France. 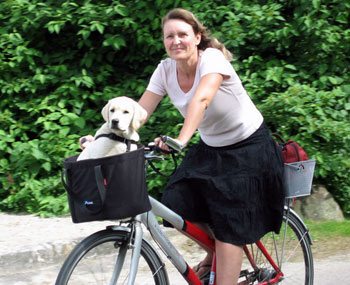 Cycling, it seems for the anti-Lycra brigade is all about recreation. Remember recreation? That’s the time people used to have before slotting into a lifestyle of work that demanded far longer hours or working 24/7. The only way they can get fit is by rising early, often before dawn, to take in an hour of morning exercise either cycling furiously, at the gym, where everyone also wears special tight fitting clothes, or, by having a run in the great outdoors wearing the latest and hottest sneakers designed to make you fleeter of foot than you are.

One school teacher had other ideas and riding leisurely to work forms part of her daily ritual. She told The Age reporter that she believes if “she cannot sing while she cycles to and from work, she is riding too fast”. And it seems she doesn’t own a brightly coloured Lycra tight fitting suit. ‘It’s a hobby, what do you need a uniform for? Women don’t wear a uniform to do decoupage,” said Ms Susie Tyrie. Goodness, here is a woman with a mind of her own, not afraid to go against the flow, someone relaxed, not lacking in self esteem, but confident and sure of her own worth.

Bring it on Susie.

The Age report went on to cite the Professor of Public Transport from Monash University who noted that the slow-cycling movement at Melbourne is all about a rebellion against many people in Melbourne’s affectation for wearing specialized cycling clothing, whether or not they are professional cyclists. Part of the reason given for this revival in normal cycling techniques, if we take note of the report in The Age, is that many cyclists wear these skin tight close fitted garments made of lycra as badges of fashionable status, certainly not because of any requirement to do so.

Interestingly, according to Bicycle Victoria, women are completely outnumbered by men in cycling. Perhaps the boys wear lycra because it shows off their ‘personalities’ much like fashionable men of the past who wore codpieces and tights. It’s all quite normal human behaviour, even if many people think it is a little silly by today’s thinking society’s standards.

Those who wear Lycra would probably think wearing it makes them stand out in a crowd and therefore visible. But does it? Just like any other uniform it may have the opposite effect by making them blend into what has become a daily familiar crowd scene for many people.

In Melbourne you are able to cycle without special clothes, especially a helmet. It’s your choice. There is a warning about safety and security but in the end, at least here in Melbourne the council/government leave the choice up to the individual. Where did I leave my blanket Watson...

It seems many people object to the amount of rules being put into legislation, which they believe is a decision best left up to the individual and their common sense.

Look at smokers. They have been warned for generations about the danger to their health but they still persist in puffing away. So perhaps it’s time now to leave it up the individual to sort out if they have an early death wish by cigarette or bicycling if they don’t take up safety advice.

All this discussion got me thinking about a report in the paper years ago in America about legislating to erect a fence around the edge of the Grand Canyon, just in case someone ‘fell off’. It went all the way to the top of government where finally commonsense reigned and it was decided that if people were ‘stupid’ enough to go near the edge of the Grand Canyon first, and then fall off second, then it was their own fault. This was because as part of your human rights in the American constitution people had choice and with choice came a responsibility to yourself as well as to others through the outcome of your own actions. Seems like common sense to me.

It often seems to the aging generation that common sense, which they learned a great deal about when they were kids, is now not really something taught by parents or teachers any more to their, and societies detriment. 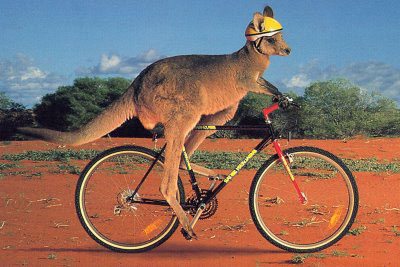 If Skippy can ride a bicycle so can you...

A little natural fear is a good thing.  In life it makes us not do stupid things. And, it’s often only when we let fear take over, or get out of proportion that dreadful stuff happens.

Lack of visual awareness is another major problem in today’s contemporary society. We are assaulted with so much information in the immediate line of vision. It can often seem as if people are walking, riding and driving around in a trance and simply do not see what is right in front of them any more.

Today in Australia there are 1.93 million bikes while worldwide they number over one billion. So bicycling is very big business. It is also a great solution in cities that need to get as green as they can. Cycling paths are being laid down all over cities of the world, as here in Australia. In many cases, they are taking over a lane previously used by cars.

Who knows we may all become like the people of Copenhagen, the capital of Denmark, where this inexpensive mode of transport profoundly shaped both its culture and habitat from when it was first introduced early in the nineteenth century, to become one of the most efficient modes of transportation for travel, recreation or sport in the world. they also have a Cycle Super Highway. This is a bicycle track, specifically targeted at commuters’ needs. People can expect that the same high standard applies all the way from A to B, even if you cross municipal boundaries. Routes are planned so that they connect residential areas, educational facilities and areas with many jobs. Simultaneously, they are designed, as to be the most direct route with least stops and space to keep one’s own pace. Finally the comfort for cyclists is a high priority with a smooth pavement and high maintenance like snow removal. They also offer extra services like green waves, countdown signals, bicycle pumps, and footrests.

Today in Copenhagen they also have a bike billed as ‘the bike you can’t live without’. It gives mothers and children a great ride and can also be used by business owners. Invented 30 years ago its popularity was confirmed recently by being voted sixth best design of all times by the Danish public, competing against worldwide icons like Bang and Olufson and Lego.

It was renowned 20th century novelist HG Wells who said  ‘Every time I see an adult on a bicycle, I no longer despair for the future of the human race’.

Perhaps the anti lycra brigade cycling for pleasure movement will have an impact for good after all. What do you think?

Fiona Wright’s Essays on Hunger express purity of purpose, courageous intelligence and a prudent compassionate revelation about the complex layers of anorexia