For thousands of years we have made history by reinventing everything eternal in our past. Focusing our attention on how best we can benefit the future of our planet, many people are turning once again to old and true ways of providing the tools we need for our daily lives.

Natural products using plant material takes us back to basics. Humans have been using baskets since the dawn of time.

Since our hunter gatherer days all humans on earth have required various vessels for eating and drinking and for gathering fruits, seeds and the various reeds and fibres invaluable to their weaving achievements.

Those that lived near rivers used baskets and bags woven from local fibres to aid their extensive fishing and hunting forays.

They were used to trap fish in rivers, gather shellfish from the sea and to scoop up fish or eggs gathered from nests of birds and waterfowl. And, as well as being used for carrying food, baskets could also be used for carrying babies. Fragmentation, a coiled basket made from pine needles and linen thread by Meri Peach, courtesy Artist and Basketry NSW

‘And did you not love Ishullanu, the gardener of your father’s palm grove?

He brought you baskets filled with dates without end; every day he loaded your table’

Weaving is an activity the first human beings on earth did together.

Baskets are mentioned in the Epic of Gilgamesh, a heroic tale from ancient Mesopotamia which is founded in the ancient wisdom-tradition of humankind some two thousand years before the Christ event.

Modern archaeologists have found a great deal of relevance to both ancient sites and cultural practices in its prose.

All cultures on earth have basket weaving traditions that date back before the times of Gilgamesh, which we are still learning about. Indigenous tribes on every continent, including Australia and America were involved in basket weaving.

The key to their success was an innate and intimate understanding of their natural environment, as well as their skills in designing nets, baskets and bags that were both flexible and adaptable. 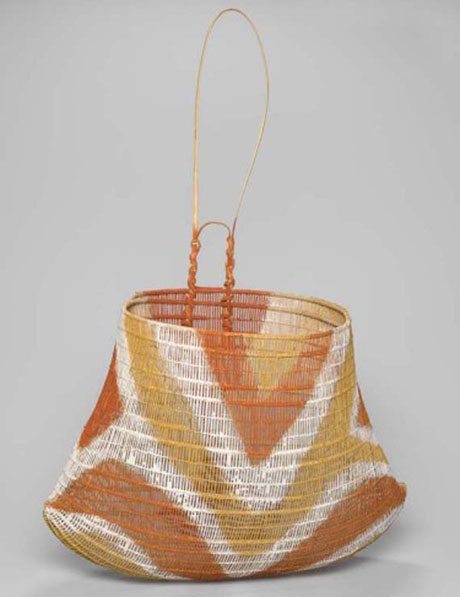 Those tribes of peoples on both continents who lived near the sea wove baskets that contained different fibres from those people who lived in the desert. Some baskets were so tightly woven so that they were able to be used for carrying honey and liquids.

The tools and technologies attached to weaving techniques reflect the geographical location of the many and varied culturally different groups. In the southern rainforests of Queensland in Australia Abe Muriata (b1952-) an eminent basket maker from the Rainforest Barna of the Girramay people made this splendid number now in the collection of the Queensland Art Gallery.

He is following the skills and duties of basket making originally shared equally between the men and women of his tribe.

This extremely fine two-horned basket is made of split cane, which comes from the vine Calamus Australis, named for its numerous spines and prickly habit. Just working with the challenging vine today requires an enormous commitment to continuing cultural traditions.

Trade was vital to the existence of indigenous Australians in some areas, because it improved the quality of life for their family groups.

Weaving techniques passed from one tribe to another where they gained their own cultural footprint. Of all the crafts basket weaving was one of the oldest known native American crafts also, where examples include pine straw, animal hair, hide, grasses and wood.

They were valuable for trade and could be used in religious ceremonies.

Lucy Park Telles, a Mono Lake Paiute – Kucadikadi (Northern Paiute) and Southern Sierra Miwok (Yosemite Miwok) Native American basket weaver was one of a group of women who became renowned for their very fine basketwork during the 20th century, some of them were also exceedingly complex.

She sold them to visitors in Yosemite National Park for years and by the 1920’s was winning prizes.

Baskets are one of the earliest of all known forms of containers. Light to transport, baskets are also mentioned in the story of the ‘flood’, also recorded in the Epic of Gilgamesh. ‘… the carriers brought oil in baskets, I poured pitch into the furnace and asphalt and oil; more oil was consumed in caulking, and more again the master of the boat took into his stores. Revealing to us their incredible ability to survive through eons of time, the remains of baskets have been found in the tombs of the ancient Egyptians, where picture stories (hieroglyphics) tell us they were used to gather and transport grapes for the wine harvest and to also carry oil.

This is one of the storage baskets found in a remarkable state of preservation, in the tomb of Senenmut’s mother, Hatnefer, who was a well known official who lived during the reign of the female Pharaoh Hatshepsut (1508-1458 BC).

This particular basket was woven from palm leaf and Halfa grass and has herringbone strips up the sides and across the lid. It would have been tied shut with linen cords and a mud seal pressed over the knot at the center of the lid. Amazingly the mud sealing still clings to one of the cords. It was excavated by the Egyptian Expedition of the Metropolitan Museum of Art, 1935–1936 and acquired by the Museum in the division of finds, 1936.

Hatnefer had died in her seventies, outliving her husband, Ramose, and several other family members by many years. When his mother died, Senenmut brought the mummies of his father, two women, and several children from their previous resting place, and had them interred in Hatnefer’s tomb.

He provided his family with all of the things necessary for the afterlife, including baskets of food to nourish their spirits. Nowadays however, like many basic structures in our time ‘baskets’ have undergone ‘a radical reinvention’ as contemporary artists attempt to challenge people’s perceptions of what a basket ‘really is’.

Basketry NSW is a group primarily for those who already have some skill in basketry, to practice their craft in the company of other basket makers just as the first Australian basket makers did. They started several years ago as an informal group of basket makers meeting and gradually became an incorporated association, joining the stable of art and craft groups at Primrose Park Art and Craft Centre, Cremorne in Sydney.

There are similar basketry groups in Victoria, South Australia and Tasmania, and every two years groups get together for a national basketry “Gathering”.

Meri Peach, the group’s President has been making baskets since 2002 and regularly teaches basketry workshops.

She also exhibits her work in art galleries and had a solo exhibition “This Bygone Age” last year at the Sturt Gallery, Australia’s oldest craft centre, renowned as a centre of excellence for the promotion & teaching of Australian contemporary craft and design. She works with both natural and synthetic fibres and as a research biologist; her biological background also informs much of her artwork for which she uses traditional basketry techniques such as twining, stitching and weaving to create non-traditional sculptural and functional forms.

Meri is also inspired by natural structures such as cocoons, webs, shells, burrows, plankton and microorganisms.

Catriona Pollard had spent much of her life exploring ‘creative expression’ and then discovered contemporary basketry and fibre sculpture and her life changed.

Having completed weaving session with Robyn Djunginy (NAIDOC National Artist of the Year), the Tjanpi Desert Weavers, Mavis Ganambarr, Meri Peach and acclaimed Australian basket artist (the late) Virginia Kaiser helped her to define her journey, which since 2008 has led to her works appearing in many exhibitions at galleries and festivals.

She said her ‘dad taught me to skip stones along the water.  I collected these at Broken Head beach near Byron Bay, where we spent hours skipping stones!’ Today the many and varied cultural concepts now wrapped up in basket making, when mixed with modern elements provides new and exciting ways for contemporary artists to express their reverence and respect for those ancient craftsmen and women, whose innovation and imagination continues to help inspire and motivate their work.