It was very rejuvenating and highly motivating when I stumbled upon a book that offered a unique approach, unexpected ambiguity and a perceptive insight into being still and going nowhere. An added bonus was the discovery that it was part of a series of inspirational books.

The Art of Stillness, published in 2014 was the first TED Book I have read and the second in the series. Each book is paired with a related TED Talk that is available on line at TED.com. The books explore more deeply the germinating ideas expressed in the short TED Talks.

These Books are designed for a single sitting read, they challenge the reader to think divergently and contemplate on previously held conceptions and understandings.

TED is a non-profit and nonpartisan foundation, indeed a global community committed to disseminating ideas through short talks, books, animation, radio programs and events. The independent, unbiased and nonaligned nature of the organisation nurtures curiosity, exploration and a sharing of ideas.

To my way of thinking communication, connection, innovation and positive change flourish in this receptive environment.

I loved how the ideas in The Art of Stillness linked to narrative examples that highlighted the writer’s journey of discovery. Also I responded very positively to how these ideas have sat comfortably in my mind slowly digested by my thinking and feeling processes. Author Pico Iyer, urging us all to practice the Art of Stillness

He was born in Oxford, England in 1957 to academic parents from India. In 1964 he moved with his family to California.

His love affair with travel began at a very early age. In fact as a nine year old he successfully convinced his parents to continue his education in England.

His persuasive argument was that an English tutelage was far less expensive than the alternative at a school near his home in California. And so he flew alone regularly back and forth over the North Pole during his childhood. Educated at Eton, Oxford and Harvard he lives in Kyoto Japan spending part of each year in a Benedictine hermitage in California. I feel sure this is where he takes time out to practice The Art of Stillness

I believe Pico Iyer has carved out a fortunate life by successfully seeking a career in travel where he is able to live and work immersed in his passion. This passion has been further enriched by his discovery of the rewards of going nowhere.

In his book he invites the reader to share in the wonder of this journey and without preaching or dogma I felt willing to embrace his practices and celebrate his insights and perceptiveness.

This journey began when he was twenty nine years old and made the decision to take a year off and travel to the ancient Japanese capital Kyoto.

This “passage to nowhere” gave him time to uncover internal joy and evaluate the significance of stillness away from the twenty-four-seven demands of a technological world.

Uluru, natural rock formation in the Northern Territory, Central Australia sacred to the Anangu, the Aboriginal people of the area.

Later in the book he describes his return to nowhere as the place that “has moods and seasons as rich as the pulsing, red-dirt spaces of Australia’s outback, as varied as the clouds you can see in a James Turrell Skyspace.”

This mediative space this nowhere can be anywhere and provides an opportunity to pause, rest and reflect. Exploring our inner landscapes will honour our individual thoughts focus on what makes us happy and foster solutions to problems that confront us continually.

Pico Iyer gently espoused the need to take time out of our own hectic lifestyles to look at our own screens that mirror our lives. Stepping back will help sustain us, give clarity of purpose to our lives and hopefully a sense of calm.

“Nowhere is magical unless you can bring the right eyes to it” articulates Pico Iyer. The simplicity of the message was very evident to me and it has certainly made me reassess and reflect. The transformation for Pico Iyer was life changing and a year after leaving Japan he returned with his wife to live there permanently.

Throughout the book he wrote about experiences of stillness with him and with other people that entered his life through personal interactions and through literature.

For example he repeatedly references his connections with Leonard Cohen, who among a myriad of remarkable achievements was a Monk at Mt Baldy in the San Gabriel Mountains beyond Los Angeles.

“Going nowhere, as Leonard would later emphasize for me, isn’t about turning your back on the world; it’s about stepping away now and then so that you can see the world more clearly and love it more deeply.”

In 2012 Leonard Cohen released a new record Old Ideas and the legendary singer’s lilting “Hallelujah” had unprecedented success as a No 1 song and one of the fastest-selling downloads.

Cohen was delivering an intimacy and a depth that the public was crying out for. The slowness of the performance offered a restoring exhilaration absent from the commotion, motion and movement of the present age.

The stillness within Mark Rothko’s abstract paintings and the silences John Cage created gave his musical performances beauty and shape, are eloquent illustrations of the essence of this Book. 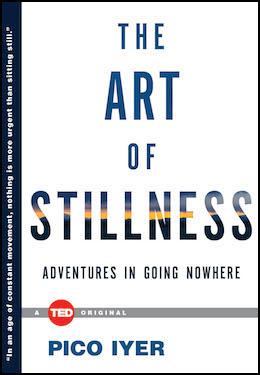 The wisdom of American psychologist, William James is succinctly conveyed in “The greatest weapon against stress is our ability to choose one thought over another.”

This is a compelling refrain with the possible outcome of gently reducing the anguish of a vast number of sufferers of stress across the globe.

The astuteness of poets and writers throughout the ages is blended throughout the text and this adds a depth and authenticity to the themes. From Emily Dickinson: I loved the contemplative core of the book, the wondrous individual approach to the themes and the cerebral patterning of the words in The Art of Stillness.

The ambiguity of stillness and travelling was sensitively linked and sympathetically investigated so that I felt they became sides of the one coin for me.

The uniqueness of seeking stillness and going nowhere was that those states of being are possible for everyone and this has to be heartening and encouraging for humanity.

According to “the mediative video artist Bill Viola’s notes, it’s the man who steps away from the world whose sleeve is wet with tears for it.”

I cherish the opportunity in the future to review more of the enlightening and ground breaking TED books.