Bring it on Showtime. Knowledge is Power. From Director Neil Jordan comes the tales and stories of the dastardly Italian Borgia dynasty, one of the most infamous families of the Renaissance period (14-16th centuries) in Italy. History has accused them of many different crimes, including adultery, simony, theft, rape, bribery, incest, poison and murder, for which they have been condemned. This is a family whose code was certainly to take no prisoners.

They were a very flawed group. But hey, as Harry Lime, in the film The Third Man (1949) said ‘in Italy for 30 years under the Borgias they had warfare, terror, murder, and bloodshed, but they produced Michelangelo, Leonardo da Vinci, and the Renaissance’. So the inference is well, they couldn’t have been all that bad surely?

My advice – just beware if any of them seek to say Amen to you. Run. 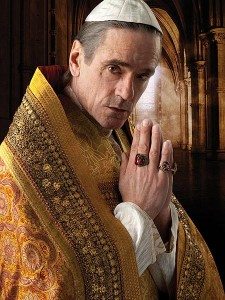 A patron who was at once conspicuous, wealthy and passionate about the antique and art fostered the fashion for valuable ornaments during the Renaissance. Such attitudes were embodied in the Medici of Florence, the Sforza of Milan and the Borgias at Rome whether the ornaments were precious, or people.

The cast of The Borgias is an international affair.

British Actor Jeremy Irons plays Rodrigo Borgia, who became Pope Alexander VI (1431-1503). He’s a lecherous Machiavellian, definitely an ‘end justifies the means’ sort of guy, who will do whatever it takes to win and retain the papal throne. He indulges himself with both a family and a mistress as he goes on a power trip, that makes all the rest we’ve been on before with other historical television series, seem like a picnic in the park. It is a chilling, brilliant performance by Irons, who these days relishes the roles of the bad guys of history. Becoming a Pope, who behind the sacred walls of the Vatican is both a light and dark soul, must be his pomp and circumstance role of a lifetime. 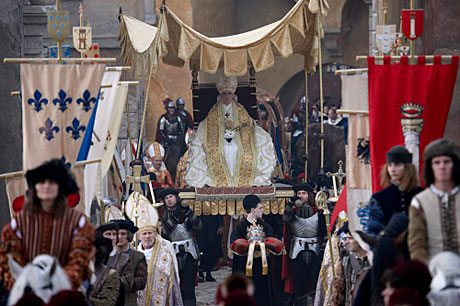 “You go for this job, and when you get there — wooooooo — you’re on the top of the mountain with no one around you. There’s no one to call, except, you know, Him.” Irons points heavenward.

“I think that’s both humbling and frightening.”…he says following his processional triumph and crowning on the throne of heaven. The ingenuity of his acting skills is evident during the papal processional scene. Wearing a magnificent bejewelled Cope, with a very high Mitre on his head covering his liturgical undergarments, before him processes a young man carrying on a luxurious cushion the multi tiered jewel studded Papal crown.

As he rides in procession Rodrigo is reflecting on himself and the person of the Pope he is to become. In this scene Irons brings all the skills of character interpretation he has gained through experience to the forefront brilliantly, leaving the viewer breathless as the emotion of the event cuts deep.

You can sense what he is thinking so clearly it’s both disturbing and uncomfortable peppered by just a tinge of excitement. All this emotion comes from just the many and varied expressions he registers on his fabulously weathered and ravaged face as he goes from triumph to just plain awesome, with just a little bit of humble in between. 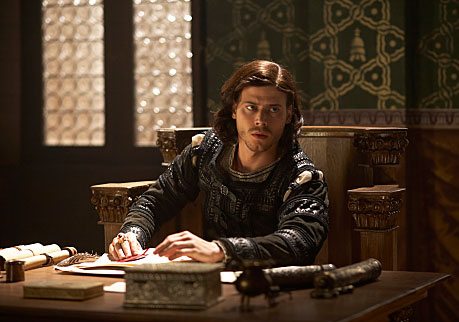 I am no longer Rodrigo but Alexander Sixtus….not “I” but “We” he says to his son Cesare…”we felt so alone out there when the crown touched our head we were frightened”

Then he says to Cesare when disrobing after the ceremony ….I was ”quite alone with just the silence of God as witness.

“ you must help me…help me to interpret the great silence of God”.

French Canadian 26-year-old actor François Arnaud plays a sinfully bad Cesare. He’s sure to make Hollywood sit up and take notice. Handsome, humble, debonair, dastardly with just a dash of cavalier, he’s definitely more than awesome. Playing alongside Irons will surely give him some spit and polish to add to his already impressive Canadian credentials.

Cesare was Rodrigo’s favourite son. Before he was Pope he persuaded Pope Sixtus IV to pronounce Cesare legitimate so he could hold an office in the Church. When Roderigo was elected Pope Alexander VI in 1492, Cesare became an Archbishop and made Cardinal one year later. He was also given the title of Duke and placed in charge of the Church’s armies. 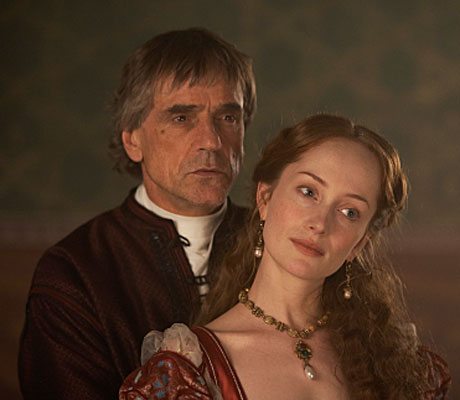 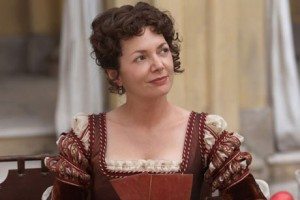 You would be wrong if you thought this series will just be another boys will be boys sort of romp.

There are some extremely beautiful women to be entirely captivated by. If we are going to have beauty rival virtue, one of the Renaissance’s favourite themes, then the women in The Borgias are all definitely contenders.

English actress Joanne Whalley convincingly plays Vannozza dei Cattanei who bore Rodrigo four children. She is a down to earth lady who knows what side her bread is buttered and what will happen when he gains power. She has to be clever if she is to retain her position as favourite.

Dutch actress Giulia Farnese,  played sensitively by Lotte Verbeek is one of the mistresses of Rodrigo, after he is elected Pope Alexander VI. He sets her up in a palatial Palazzo next door and can access her bedroom through a secret corridor from the Vatican. 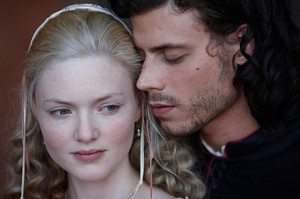 She is breathtakingly beautiful and personifies ‘beauty is as beauty does’. It’s not only just about her superficial appearance but also about her demeanour, her behaviour, her attitudes and inner spirit. Giulia is lovely to behold. She is Giulia la bella.

Then there is 23 year old English beauty Holliday Grainger, young blond and bountiful she is the infamous, ambitious Lucrezia Borgia (1480-1519).

While appearing high spirited and innocent we can sense she is not really that naive. Although she does have a lot of tension to deal with in a very early scene with Cesare where she says to him “I shall never love a husband as I love you”. While it is indeed touching it then sends chills up and down your back as you slowly realise this is her brother.

History has Lucrezia as being rapacious and treacherous, but recent research suggests this was more due to family associations than to her own actions. She married multiple times but there still remains an ambiguity as to her relationships within her immediate family. It was a different time and the Borgias were a powerful and influential people. Whether she wanted to be Lucrezia is complicit in the political machinations of her father and brothers. They arranged several marriages for her to important or powerful men in order to advance their own political ambitions. After leaving behind two husbands and many lovers it is the third husband who gives her a number of children. Alfonso d’Este (Duke of Ferrara) seemingly turns her into a respectable and accomplished Renaissance Duchess. She effectively rises above both her illegitimacy station and previous reputation to survive the fall of the Borgia’s following her father’s death.

It’s interesting to note that Holliday Grainger, as Lucrezia just about conforms to the Renaissance’s Nine Laws of Beauty

Three things white; the skin, the teeth, the hands
Three black; the eyes, the eyebrows, the eyelashes
Three red; the lips, the cheeks, the nails.
Three long; the body, the hair, the hands,
Three short; the teeth, the ears, and the feet
Three narrow: the mouth, the waist, and the ankle
Three big: the arms, the thighs, and the calf.
Three small; the breast, the nose, and the head 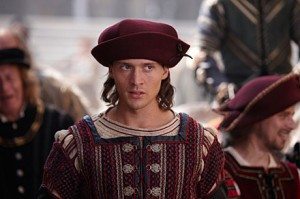 Then there are the textiles in this series, which are nothing short of stunning. The textiles of the Renaissance period are renowned. They reflect the economic growth in Italy at the time with rich tapestries, beautiful brocades highlighted with gold thread, soft warm velvets and the legendary cloth of gold.

According to the Catholic Encyclopedia so little have its historians defended Alexander VI and his reputation that in the middle of the nineteenth century Cesare Cantù could only write that Alexander VI was the only Pope who had never found an apologist.

A priest or a pope is a public officer of holy mother church. During his lifetime he is expected to lead a blameless life because he is meant to be a model of virtue for the laity to look up to. If he is virtuous then he inspires onlookers to have both respect for the society in which he lives and of which he is an ornament.

When Alexander VI’s career came to an abrupt close on the 6 August 1503 despite all precautions it was poison. The Pope with Cesare and others had dined with Cardinal Adriano da Corneto in the open air after nightfall. The entire company contracted a fever but Rodrigo died, although it was reported that the bloated and dreadful appearance of his corpse gave rise to the familiar suspicion of poison. This series has it all, great acting, fabulous locations, sumptuous music and absolutely incredible costumes and characters.  Hey, The Borgias are here. 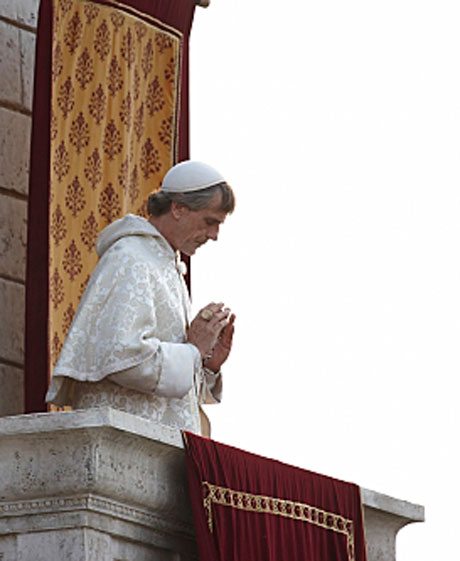 Showtime has put together a pretty impressive website for this event. With historical facts, period drama and details of the celebrity cast, crew and characters.

The Borgias – Season 2 Back with a Vengeance on Showtime

The Borgias, Behind the Scenes

A style of clock that emerged during the reign of France’s King Louis XVI (1638-1715) was one where the works were on view, which are known as ‘skeleton clocks’