Dearly beloved, avenge not yourselves, but rather give place unto wrath: for it is written, vengeance is mine; I will repay, saith the Lord. However that’s not how the head of the Borgia family Pope Alexander VI (1431-1503) aka Rodrigo Borgia (Jeremy Irons) sees it. ‘Vengeance is ours’ he says. He is referring to the members of his highly dysfunctional dynastic family, including his sons Cesare (Francois Arnaud), Juan (David Oakes) and Jofré (Aiden Alexander), as well as his stunningly beautiful and scandalous daughter Lucrezia (Holliday Grainger). Then there is his incredibly beautiful mistress Giulia Farnese (Lotte Verbeek), for whom intimacy with the Pope meant being referred to unkindly as ‘the bride of Christ’. This complex always captivating and compelling series saga is well and truly back with a vengeance from Showtime for Series Two. There will be many out there quite literally salivating at the thought that the Borgia family, who are an extraordinary group of characters, might finally get their comeuppance. There is doubt this stylish miniseries created by Neil Jordan, and directed by a cast of the industries finest, has intrigued and addicted audiences to its cleverly crafted episodes.

Jeremy Irons as Pope Alexander VI is in his element in a role that has come along perfectly placed in the progression of his fine acting career. He relishes ever aspect of Pope Alexander’s life and its complexity, his mighty voice resounding magnificently in hallowed halls, Renaissance chambers and Gothic cathedrals. The pope’s son Cardinal Cesare, who married into the royal French household to cement the alliance between King Louis XII and the Borgia family, is brilliantly played by French Canadian heartthrob Francois Arnaud. I will guard your Bishop if you will be my Pawn

In his lifetime Cesare set out to, and conquered the north of Italy, combining siege and assassination with ruthless effect. Niccolo Machiavelli, whose book The Prince set in place the whole idea that ‘the end justifies the means‘ used Cesare as his prince’s role model. Published posthumously in 1532, it revealed just how Machiavelli admired tyranny, saying that a republic needed a strong and ruthless leader. He also said ‘The fact is that a man who wants to act virtuously in every way necessarily comes to grief among so many who are not virtuous‘. Machiavelli’s book was highly influential in its day and with Baldassare Castiglione’s The Courtier and The Holy Bible was found beside many a royal and aristocratic bed. Tales of infamy and murder during the dynasty of the Borgia family had members of the Roman Catholic church reeling in horror, while modern scholars are quick to point out that Cesare and Alexander’s actions contributed to the eventual Protestant Reformation. Decked out in fabulous textiles, it would be their constant plotting, scheming and hard living in the end that would bring the Borgia’s undone, but fortunately for us not before we have journeyed with them through one of history’s most intriguing, inspiring and completely infamous periods, the Italian Renaissance of the fifteenth and sixteenth centuries.

Fashion is a lens through which society perceives itself. The textiles of the Renaissance were strong in structure and texture, with superb attention to the detail of their designs. They were used both as clothing and furnishings in the establishments of wealthy patrons.  There were no fashion magazines or newspaper reports on the latest modes, so the pressure to change fashions was much less strong, but it was present, it just developed more slowly. One of Castiglione’s characters in The Courtier explained: Since the introduction of new habits (ie clothes) the old have an uncouth sort of appearance

The rediscovery of ancient texts in Europe at this time began changing people’s perceptions. They questioned the world around them and their place in it. From humanist writings grew the sense that not the afterlife but also the life here and now should be and was a proper concern of humanity. The medieval church had taught that all things should be examined in regard to moral value, considering the entire universe exclusively in relation to the church. This minimized people’s works and aspirations and in their imagination uncultivated areas of the countryside including forested areas were populated with malignant spirits and this was for a long time a fear outlaws and other law breaking citizens were able to capitalize on. The Borgias led the way, reveling in the ultimate power trip, becoming Italy’s first crime family. The Renaissance was a period of scientific examination that brought about a period of creative frenzy. It infected not only artists, architects and scholars, but also rich, powerful and by now very educated rulers of many of the city-states that made up the land mass we now know as Italy.

A new group of accomplished architects and artisans collectively ushered in a brand new era in art, design, fashion music and style. Central to that development was the emergence of the artisan as a creator, an artist who was sought after, sponsored and respected for his erudition and imagination by great families

As a patron of the arts, Pope Alexander VI was instrumental in having Michelangelo fulfill a new role as architect and re-draw plans to rebuild St Peter’s Basilica. He also restored the now famous Castel Sant’Angelo, which was originally built by the Roman Emperor Hadrian as a mausoleum (123-139 AD).

A secret corridor, known as the Passetto di Borgo, connected the Castel Sant’Angelo with the Vatican. Tom Hanks ran along it in Angels and Demons. It was used by Pope Clement VII and his Swiss Guards as a place of refuge when Charles de Bourbon’s army sacked Rome in 1527.

The power of the family was paramount to Pope Alexander. Many of his peers and scholars today have acknowledged that he was a ‘good politician and diplomat‘ but when he died, reputedly poisoned by an apple (according to the Catholic encyclopedia in reality malarial fever*) many breathed a sigh of relief. 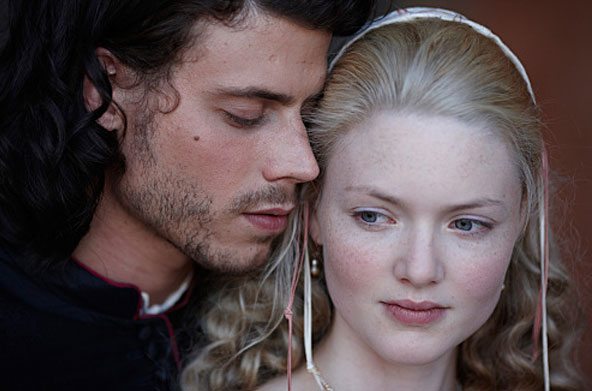 Lovely Lucrezia with her brother Cesare

His son Cesare made an unholy alliance with Giuliano della Rovere in his bid to become Pope. But della Rovere betrayed him, and Cesare died during a siege in 1507 at Spain, only four years after his father.

Lucrezia lasted until 1519, giving birth to many children most of which died prior to their mother. She was said to have been a model wife to her third husband and was respected for her virtue and amiability, which is very different from the accounts of her being a poisoner.

Scholars have suggested that it was more likely that Lucrezia was a victim of the crimes of her famous father and the handsome Cesare, the brother whom she loved.

God’s blessing it seems for the Borgia’s came at a very high price. Perhaps it was one far too high to pay?

The Wyeth family are a multi-layered set of personalities in the play Other Desert Cities, which is testimony to the skill of good writing and great acting